By understanding the academic needs we have prepared the Tamilnadu State Board Class 10 Social Science History Solutions Chapter Wise. Samacheer Kalvi 10th Social Science History Solutions Chapter 2 The World Between Two World Wars Questions and Answer. There are 4 parts in Social Science we have provided the topics according to the parts. You can Download Samacheer Kalvi 10th Social Science Book Solutions Guide Pdf, Tamilnadu State Board help you to revise the complete Syllabus and score more marks in your examinations. Before you start your preparation go through the chapters covered in this academic. Our aim is to help the students by providing the question and answers chapter wise and help them to gain a good score in the exams.

The World Between Two World Wars Book Back Answers Question 1.
With whom of the following was the Lateran Treaty signed by Italy?
(a) Germany
(b) Russia
(c) Pope
(d) Spain
Answer:
(c) Pope

Samacheer Kalvi 10th Social Solution Question 3.
Who made Peru as part of their dominions?
(a) English
(b) Spaniards
(c) Russians
(d) French
Answer:
(b) Spaniards

10th Social Samacheer Kalvi Question 6.
Who was the brain behind the apartheid policy in South Africa?
(a) Verwoerd
(b) Smut
(c) Herzog
(d) Botha
Answer:
(a) Verwoerd

Question 1.
What do you know of the White Terror in Indo-China?
Answer:
The period of Political repression in Indo-China starting in 1927 by the Republic of China government was called ‘White Terror’.

Question 2.
Discuss the importance of Ottawa Economic Summit.
Answer:
When British trade was badly affected by the Great Depression of 1929, it transferred its effect on its colonies by signing a bilateral trade with them. This was called as Economic summit at Ottawa in 1932. It was agreed by the colonies that they will prefer only British goods and not any other goods.

Question 3.
Explain the Monroe Doctrine.
Answer:
The famous Monroe doctrine was brought by Monroe, the President of the USA. This doctrine declared that if Europeans inteferred anywhere in America, north or south, it would amount to waging a war against the United States. This threat frightened the European powers and kept them away from South America.

Question 4.
What was the result of Mussolini’s march on Rome?
Answer:
In 1919, Mussolini joined the Fascist party. He gathered support from all groups of people in the society and in October 1922, he organised a March to Rome. Impressed by the force behind Mussolini, king invited him to form the Government.

Question 6.
How did Great Depression impact on Indian agriculture?
Answer:
The impact of Great depression on Indian agriculture was very severe. The value of the agricultural produce reduced by half whereas the rent to be paid to the government remain the same. To compensate the loss, the farmers had to sell their gold and silver reserves.

Question 7.
Explain the reason for the Smuts-Herzog alliance.
Answer:
The world economic depression brought unemployment and bankruptcy to South Africa. In this context labour withdrew its support given to the National Party. Smuts believed that a coalition government was required to solve the country’s economic problems. Therefore, the South Africa party (led by Smuts) and the National Party (led by Herzog) united in 1934 to form the United South Africa National Party or United Party for short. However, the Smuts- Herzog alliance lasted until 1939.

Question 8.
Define “Dollar Imperialism.”
Answer:
It refers to the USA’s policy to maintain the distant lands and dominate them through their economic help and support in terms of their currency dollar.

VI. Answer the questions given under each caption.

(a) Define the concept of decolonisation.
Answer:
Decolonization means the process of transferring the legal and – institutional control to the indigenous nationalist governments by the colonial powers.

(b) How did Ho Chi Minh become a popular Vietnam Nationalist?
Answer:
Ho Chi Minh went to Europe at the age of twenty one. From London he went to Paris and in the Paris Peace conference, he lobbied for the independence of Vietnam. He wrote several articles in newspapers. His pamphlet, French Colonialism on Trial, made him well known as a Vietnam nationalist.

(b) How many republics came into being from Central America?
Answer:
Central America split into five republics namely Costa Rica, El Salvador, .Guatemala, Honduras and Nicaragua.

Question 1.
Trace the circumstances that led to the rise of Hitler in Germany.
Answer:
(i) In 1919, a group of seven men met in Munich and founded the National socialist German worker’s Party which later came to be known as Nazi Party. One of these men was Adolf Hitler.
(ii) In 1923, Hitler abortively attempted to capture power in Bavaria. But this proved a blunder. He was sent to prison. In the Presedential election of 1932, the communist party polled about 6,000,000 votes. This alarmed capitalists and property owners. Hitler exploited this opportunity to usurp powers.
(iii) In 1933, Hitler was made the Chancellor of Germany. Having acquired power, he brought an end to the parliamentary democracy established in Germany after the First World War.
(iv) He converted Germany into a highly centralised state. All political parties except the Nazi Party were declared illegal. The army of brown-shirted and jack-booted storm-troopers was expanded.
(v) Hitler Youth was created, and the Labour Front set up. Trade unions were abolished, their leaders were arrested and all workers were compelled to join the German Labour Front. Strikes were made illegal, wages were fixed by the government, and the Labour Front was used by the Nazis to control industry.
(vi) Total state control was extended over the press, theatre, cinema, radio and over education. The Nazi Party’s propaganda manipulated public opinion through planned propaganda.

Question 2.
Attempt a narrative account of how the process of decolonization happened in India during the inter-war period (1919-39).
Answer:

Question 3.
Describe the rise and growth of nationalist politics in South Africa.
Answer:

Question 1.
Each student may be asked to write an assignment on how each sector and each section of population in the USA came to be affected by the Stock Market Crash in 1929.
Answer:
The New York stock Market Crash occurred in 1929. As a result of this the price of shares in the stock market fell steeply. The investors and consumers got discouraged to such an extent that more and more people began to sell their shares and dispose of their stocks. But there were no buyers. This great crash and decline in investments was followed by the failure of American banks. The American financiers were forced to recall their own funds invested abroad.

Question 2.
A group project work on Vietnam War is desirable. An album or pictures, portraying the air attacks of the US on Vietnam and the brave resistance put up by the Vietnamese may be prepared.
Answer:
You can do this activity in the class by taking reference from internet, under the guidance of your teacher.

Question 1.
The Great Economic Depression began in ……
(a) England
(b) USA
(c) France
Answer:
(b) USA

Question 2.
The secret police of Hitler were called as:
(a) Duce
(b) Gestapo
(c) Swastika
(d) Third Reich
Answer:
(b) Gestapo

Question 4.
The discovery of ……………. in Transvaal, led to large number of Britishers settle in and around Johannesburg.
(a) Smuts
(b) Coal
(c) Gold
(d) Dutch
Answer:
(c) Gold

Question 7.
A democratic constitution with the federal structure was established by a National Assembly,
(a) Berlin
(b) Weimer
(c) Finland
Answer:
(b) Weimer

Question 9.
Hitler’s anti-Semitism grew to the extent of killing the
(a) Aryans
(b) Jews
(c) Mongolians
Answer:
(b) Jews

Question 10.
The Boer wars took place between the Boers and the:
(a) Germans
(b) Africans
(c) British
(d) Americans
Answer:
(c) British

Question 1.
What were the causes for the Great Economic Depression?
Answer:

Question 2.
What is meant by Fascism?
Answer:
Fascism is a form of government which is characterized by one-party dictatorship, Forcible power, strict control on society and of the economy.

Question 3.
What does the term ‘Fascism” mean?
Answer:

Question 4.
What are the factors that led to the triumph of Fascism in Germany?
Answer:
Germany raised to great heights in economic, political and cultural accomplishments. Germany’s universities, its science, philosophy, music were known all over the world. Germany exceeded much more than Britain and the USA in the Industrial production.

Question 5.
Name the reasons for the rise of fascism.
Answer:

Question 6.
Write a note on Nelson Mandela.
Answer:
Nelson Mandela was a South African revolutionary who fought against apartheid and joined the African National Congress (ANC). When the ANC was banned he was arrested, and was in prison for 27 years. In 1994, he became the first black president of South Africa.

Question 8.
What do you understand by the term ‘Inflation’?
Answer:
It refers to the general increase in the price level and a fall in the purchasing power of money.

Question 9.
Write a short note on the early life of Mussolini?
Answer:

Question 10.
Write about the end of Mussolini.
Answer:

Question 11.
How did Hitler become a Chancellor of Germany?
Answer:
Under the inspiring leadership of Hitler, the nazi party grew in power and number.

Question 12.
Write about the Nazi policy towards Jews?
Answer:

Question 1.
Position of America at the end of I world war

(a) What is the position of America, at the end of the world war I ?
Answer:
America was financially in a sound position.

(b) What was his father?
Answer:
His father was a customs officer.

(c) What did he organize?
Answer:
He organized group of men called the National socialists in 1919, which became the Nazist Party.

(d) What did Aztecs do?
Answer:
For nearly 200 years, Aztecs ruled their empire and founded their capital city of Tenochtitlan.

Question 1.
What were the achievements of Fascism under Mussolini?
Answer:

Question 2.
Explain the Anti-colonial movement that emerged in Indo-China and the influence of Ho-Chi-Minh.
Answer:

Question 3.
State the contribution of Ho Chi Minh in the freedom of Vietnam.
Answer: 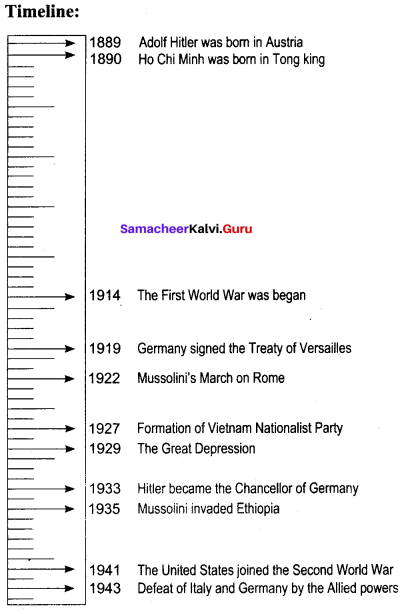 We hope the information prevailed in this article is helpful for all the students of Class 10. The Tamilnadu State Board Samacheer Kalvi Solutions for Class 10 Social Science History Chapter 2 The World Between Two World Wars Questions and Answer pdf enhance your skills and score good marks in the exams. Stay tuned to get the latest information about the Samacheer Kalvi 10th Social Science History Solutions Chapter 2 The World Between Two World Wars.