Samacheer Kalvi 11th Economics Guide Question 8.
“Economics studies human behavior as a relationship between ends and scarce means which have alternative uses” is the definition of the economics of …………………………
(a) Lionel Robbins
(b) Adam Smith
(c) Alfred Marshall
(d) Paul A Samuelson
Answer:
(a) Lionel Robbins

Economics Class 11 Samacheer Kalvi Question 16.
……………………….. have exchange value and their ownership rights can be established and exchanged.
(a) Goods
(b) Services
(c) Markets
(d) Revenue
Answer:
(a) Goods

Answer the following questions in one or two sentences

Economics Samacheer Kalvi Question 21.
What is meant by Economics?
Answer:
The term ‘Economics’ comes from oikonomikos which means ‘Management of households’. ‘Political Economy’ is renamed as ‘Economics’ by Alfred Marshall.

11 Economics Samacheer Kalvi Question 23.
What are the goods?
Answer:
The materialistic things and services which satisfy human wants are called as goods in economics.

Samacheer Kalvi Economics 11th Question 26.
Define positive economics.
Answer:
Positive economics deals with what it is, its means, it analyses a problem on the basis of facts and examines its causes.

11th Economics Question Answer Question 27.
Give the meaning of the deductive method?
Answer:

Answer the following questions in One Paragraph

Economics Class 11 Chapter 1 Notes Pdf Question 28.
Explain the scarcity definition of Economics and assess it.
Answer:
Lionel Robbins published a book “An Essay on the Nature and Significance of Economic Science”. In it, he defined “Economics is a science which studies human behavior as a relationship between ends and scarce means which have alternative uses”.
Assessment: 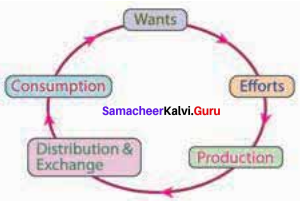 Question 31.
Elucidate different features of services?
Answer:
Along with goods, services are produced and consumed. They are generally, possess the following:

3. Inseparable from their makers:

Answer the following questions in about a page

The important features of Marshall’s definition are:

4. Samuelson’s – growth definition:
Paul Samuelson defines Economics as “the study of how men and society choose, with or without the use of money, to employ scarce productive resources which could have alternative uses to produce various commodities over time, and distribute them for consumption, now and in the future among various people and groups of society”.

The major implications of this definition are as follows:

Economics as an art:

Economics as a science :

Basic problems of the Economy : 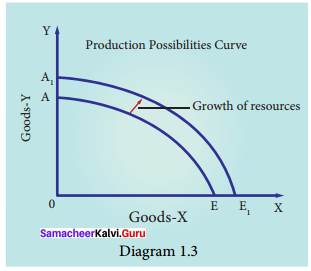 (i) The problem of choice :

(ii) The Notion of scarcity :

Question 6.
is the unit of measurement of utility.
(a) Price
(b) Utils
(c) Consumption
(d) Human wants
Answer:
(b) Utils

Question 10.
Utility can be measured indirectly using the ‘Measuring rod of money’ is the statement of
(a) Adam Smith
(b) Samuelson
(c) Marshall
(d) Lionel Robbins
Answer:
(c) Marshall

Choose the odd one out

Analyse the reason for the following

Fill in the blanks with the suitable option given below

Question 20.
Utility can be measured indirectly using the ‘Measuring rod of money’ is the statement of
(a) Marshall
(b) Samuelson
(c) Robbins
(d) Frisch
Answer:
(a) Marshall

Answer the following questions in one or two sentences

Question 1.
What is scarcity?
Answer:
Scarcity is the gap between what people want and what they are able to get.

Question 3.
Explain Value.
Answer:
Value is the power of a commodity to command other commodities in exchange.

Question 4.
What is Income?
Answer:
Income is the amount of monetary or other returns, either earned or unearned, accruing over a period of time.

Question 5.
Give the meaning of the Inductive method.
Answer:
Induction is a process in logic facilitative or arriving at an inference, moving from particular to the general.

Question 6.
What are the kinds of goods?
Answer:

Answer the following questions in One Paragraph

Question 3.
Whether economics is an art or science ? Explain.
Answer:
1. Economics as an art:
Art is the practical application of knowledge for achieving particular goals. Economics provides guidance to the solutions to all the economic problems.
A.C. Pigou, Alfred Marshall and others regard economics as an art.

2. Economics as a science :
Science is a systematic study of knowledge. Science develops the co-relation between cause and effect based on facts.
Economics examines the relationship between the cause and effect of the problems. Hence, it is rightly considered as both an art and a science.

Question 5.
What are the methods of economic analysis ?
Answer:
There are two types of methods used in economics.
i. Deductive Method :

ii. Inductive method :
Inductive method is also called as empirical method. It involves the process of reasoning from particular facts to general principle. In this method, economic generalizations are derived based on

Answer the following questions in about a page 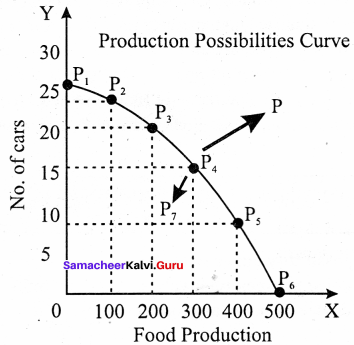 Hence in every society certain choices have to be made.

What and how much to produce?

In this process, the crucial decisions include:

For whom to produce?

We wish the knowledge shared regarding Samacheer Kalvi for Class 11th Economics Solutions Chapter 1 Introduction To Micro-Economics Questions and Answers has been helpful to you. If you need any further help feel free to ask us and we will get back to you with the possible solution. Bookmark our site to avail the latest updates on different state boards solutions in split seconds.