Ace up your preparation by referring to the Samacheer Kalvi Class 12th Physics Solutions Chapter 10 Communication Systems and learn all the topics within. Click on the topic you want to prepare from the Class 12th Chapter 10 Communication Systems Questions and Answers and prepare it easily. You can understand your strengths and weaknesses by practicing the Questions in Samacheer Kalvi Class 12th Physics Solutions PDF.

Question 1.
The output transducer of the communication system converts the radio signal into …………. .
(a) Sound
(b) Mechanical energy
(c) Kinetic energy
(d) None of the above
Answer:
(a) Sound.

Question 1.
Give the factors that are responsible for transmission impairments.
Answer:

Question 2.
Distinguish between wireline and wireless communication? Specify the range of electromagnetic waves in which it is used.
Answer:

Question 4.
What does RADAR stand for?
Answer:
Radar basically stands for Radio Detection and Ranging System.

Question 5.
What do you mean by Internet of Things?
Answer:
Using the Internet of things (lOT), it is possible to control various devices from a single device.
Ex. home automation using a mobile phone.

The signal shown in figure (a) is the message signal or baseband signal that carries information, figure (b) shows the high-frequency carrier signal and figure (c) gives the amplitude modulated signal. We can see clearly that the carrier wave is modified in proportion to the amplitude of the baseband signal 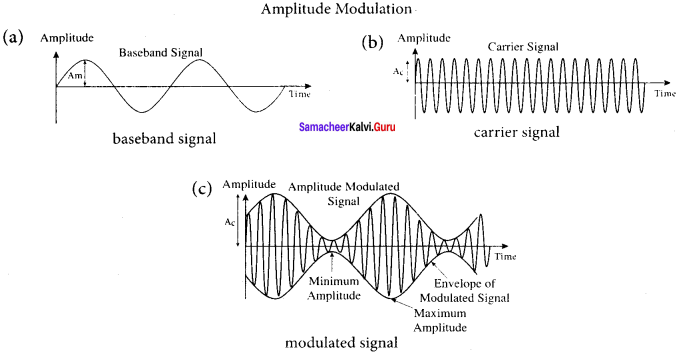 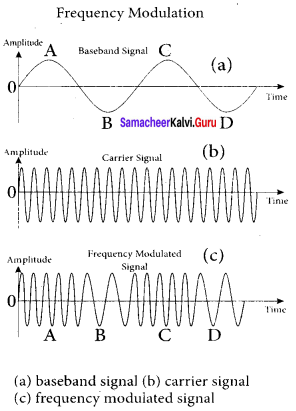 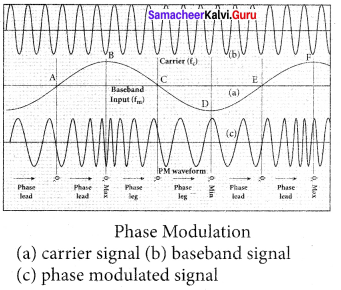 On the other hand, the negative half cycle of the baseband signal produces a phase lag in the carrier signal. This appears to have stretched the frequency of the carrier wave. Hence similar to frequency modulated wave, phase modulated wave also comprises of compressions and rarefactions. When the signal voltage is zero (A, C, and E) the carrier frequency is unchanged. 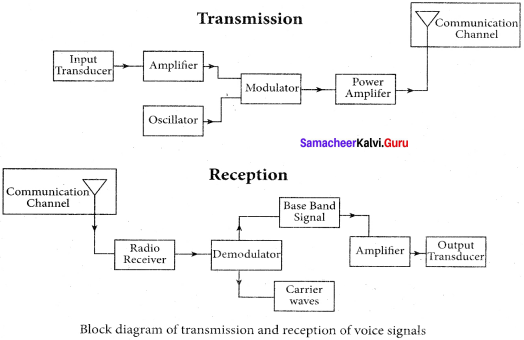 3. Transmitter:
It feeds the electrical signal from the transducer to the communication channel. It consists of circuits such as amplifier, oscillator, modulator, and power amplifier. The transmitter is located at the broadcasting station.

4. Amplifier:
The transducer output is very weak and is amplified by the amplifier.

5. Oscillator:
It generates a high-frequency carrier wave (a sinusoidal wave) for long-distance transmission into space. As the energy of a wave is proportional to its frequency, the carrier wave has a very high energy.

6. Modulator:
It superimposes the baseband signal onto the carrier signal and generates the modulated signal.

7. Power amplifier:
It increases the power level of the electrical signal in order to cover a large distance.

8. Transmitting antenna:
It radiates the radio signal into space in all directions. It travels in the form of electromagnetic waves with the velocity of light (3 x 108 ms-1).

10. Noise:
It is the undesirable electrical signal that interfaces with the transmitted signal. Noise attenuates or reduces the quality of the transmitted signal. It may be man-made (automobiles, welding machines, electric motors, etc.) or natural (lightning, radiation from sun and stars, and environmental effects). Noise cannot be completely eliminated. However, it can be reduced using various techniques.

11. Receiver:
The signals that are transmitted through the communication medium are received with the help of a receiving antenna and are fed into the receiver. The receiver consists of electronic circuits like demodulator, amplifier, detector etc. The demodulator extracts the baseband signal from the carrier signal. Then the baseband signal is detected and amplified using amplifiers. Finally, it is fed to the output transducer.

12. Repeaters:
Repeaters are used to increase the range or distance through which the signals are sent. It is a combination of transmitter and receiver. The signals are received, amplified, and retransmitted with a carrier signal of different frequencies to the destination. The best example is the communication satellite in space.

13. Output transducer:
It converts the electrical signal back to its original forms such as sound, music, pictures or data. Examples of output transducers are loudspeakers, picture tubes, computer monitors, etc.

14. Attenuation:
The loss of strength of a signal while propagating through a medium is known as attenuation. Range It is the maximum distance between the source and the destination up to which the signal is received with sufficient strength.

Both transmitting and receiving antennas must be close to the earth. The size of the antenna plays a major role in deciding the efficiency of the radiation of signals. During transmission, the electrical signals are attenuated over a distance. Some reasons for attenuation are as follows:

1. Increasing distance:
The attenuation of the signal depends on

2. Absorption of energy by the Earth:
When the transmitted signal in the form of an EM wave is in contact with the Earth, it induces changes in the Earth and constitutes a current. Due to this, the earth behaves like a leaky capacitor which leads to the attenuation of the wave.

3. Tilting of the wave:
As the wave progresses, the wavefront starts gradually tilting according to the Skywave curvature of the Earth. This increase in the tilt decreases the electric field strength of the wave. Finally, at some distance, the surface wave dies out due to energy loss.

The frequency of the ground waves is mostly less than 2 MHz as high-frequency waves undergo more absorption of energy at the earth’s atmosphere. The medium wave signals received during the day time use surface wave propagation. It is mainly used in local broadcasting, radio navigation, ship-to-ship, ship-to-shore communication, and mobile communication.

2. Sky Wave Propagation:
The mode of propagation in which the electromagnetic waves radiated from an antenna, directed upwards at large angles gets reflected by the ionosphere back to earth is called skywave propagation or ionospheric propagation. The corresponding waves are called sky waves. 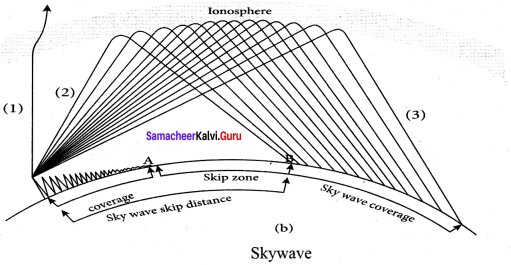 The frequency range of EM waves in this mode of propagation is 3 to 30 MHz. EM waves of frequency more than 30 MHz can easily penetrate through the ionosphere and do not undergo reflection. It is used for short wave broadcast services. Medium and high frequencies are for long-distance radio communication.

Ionosphere acts as a reflecting surface. It is at a distance of approximately 50 km and spreads up to 400 km above the Earth’s surface. Due to the absorption of ultraviolet rays, cosmic ray, and other high-energy radiations like α, β rays from sun, the air molecules in the ionosphere get ionized.

3. Space wave propagation:
The process of sending and receiving information signal through space is called space wave communication. The electromagnetic waves of very high frequencies above 30 MHz are called space waves. These waves travel in a straight line from the transmitter to the receiver. Hence, it is used for line of sight communication (LOS).

For high frequencies, the transmission towers must be high enough so that the transmitted and received signals (direct waves) will not encounter the curvature of the earth and hence travel with less attenuation and loss of signal strength. Certain waves reach the receiver after getting reflected from the ground.

Question 4.
What do you know about GPS? Write a few applications of GPS.
Answer:
GPS stands for Global Positioning System. It is a global navigation satellite system that offers geolocation and time information to a GPS receiver anywhere on or near the Earth. GPS system works with the assistance of a satellite network. Each of these satellites broadcasts a precise signal like an ordinary radio signal.

Question 5.
Give the applications of ICT in mining and agriculture sectors.
Answer:
(i) Agriculture:
The implementation of information and communication technology (ICT) in the agriculture sector enhances productivity, improves the living standards of farmers, and overcomes the challenges and risk factors.

Question 1.
As the _______ of the carrier signal is very high, there is less attenuation.
a) amplitude
b) frequency
c) phase
d) both a & b
Answer:
b) frequency

Question 19.
For a frequency less than the critical frequency, skip distance is _______.
a) maximum
b) minimum
c) zero
d) unity
Answer:
c) zero

Question 2.
Write down the advantages and limitations of amplitude modulation (AM)?
Answer:
Advantages of AM:

Question 3.
Write down the advantages and limitations of frequency modulation (FM)?
Answer:
Advantages of FM:

Question 4.
Write down the advantages of phase modulation (PM)?
Answer:
Advantages of PM:

Question 5.
What is called the bandwidth of the transmission system?
Answer:

Question 7.
Define skip distance.
Answer:
The shortest distance between the transmitter and the point of reception of the sky wave along the surface is called as the skip distance.

Question 9.
Give the uses of mobile communication?
Answer:
Used to communicate with others in different locations without the use of any physical connection like wires or cables.

Question 10.
Write down the application of ICT in Fisheries?
Answer:
Fisheries:
(a) Satellite vessel monitoring system helps to identify fishing zones.
(b) Use of barcodes helps to identify time and date of catch, species name, quality of fish.

The high-frequency radio wave signals travel in a straight line (line of sight) may come across tall buildings or mountains or even encounter the curvature of the earth. A communication satellite relays and amplifies such radio signals via transponder to reach distant and far-off places using uplinks and downlinks. It is also called a radio repeater in the sky. The applications are found to be in all fields and are discussed below.

Question 2.
Explain satellite communication and list out the applications.
Answer:

iii) Navigation satellite: Determines the geographic location of ships, aircraft or any other object.

Question 3.
Internet is the largest network of millions of people – justify.
Answer:

iii) E-Commerce:
Buying and selling of goods and services, transfer of funds are done on an electronic network.

Hope the data shared has shed some light on you regarding the Samacheer Kalvi Class 12th Physics Solutions Chapter 10 Communication Systems Questions and Answers. Do leave us your queries via the comment section and we will guide you at the earliest with help seeked. Stay connected with our website and avail the latest information in a matter of seconds.