I. Choose the appropriate answer :

Force And Motion Class 7 Questions And Answers Question 1.
A particle is moving in a circular path of radius r. The displacement after half a circle would be
(a) Zero
(b) R
(c) 2r
(d) r/2
Answer:
(c) 2r

Force And Motion Class 7 Book Back Questions And Answers Question 2.
From the given v-t graph it can be inferred that the object is

7th Science Force And Motion Question 3.
Which of the following figures represent uniform motion of a moving object correctly?

Samacheer Kalvi Guru 7th Science Book Back Answers Question 1.
All objects having uniform speed need not have uniform velocity. Describe with the help of examples.
Answer:
An object moving in uniform circular motion is moving around the perimeter of the circle with a constant speed. While the speed of object is constant, its velocity is changing, Ex: Merry-go-round, roller coaster, planets orbiting the sun.

Samacheer Kalvi Guru 7th Standard Science Question 2.
“She moves at a constant speed in a constant direction”. Rephrase the same sentence in fewer words using concepts related to motion.
Answer:
She moves in a straight line with constant velocity. 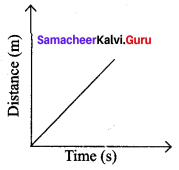 (b) A car parked on road side 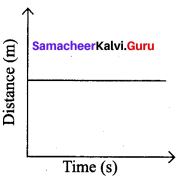 Kalvi Guru 7th Standard Question 3.
What do you mean by constant acceleration?
Answer:
A body is said to have constant acceleration, if it travels is a straight line and its velocity increases or decreases by equal magnitude in equal intervals of time.
Ex: the motion of a freely falling body.

Stable Equilibrium:
The frustum can be tilted through quite a big angle without toppling. 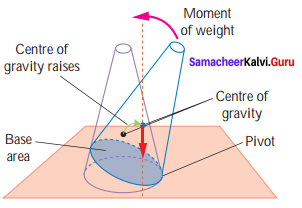 Unstable Equilibrium:
The frustum will topple with the slightest tilting. Its centre of gravity is lowered when it is displaced. 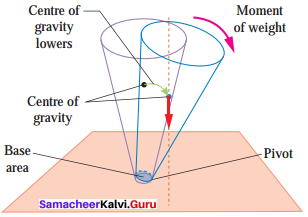 The vertical line through its centre of gravity falls outside its base.

7th Samacheer Science Guide Question 2.
Write about the experiment to find the centre of gravity of the irregularly shaped plate.
Answer:

IX. Fill in the boxes:

Samacheer Kalvi 7th Science Solutions Question 1.
As shown in the above picture, Kavitha can reach her school in two ways. Can you tell, by choosing which path she could reach the school early. 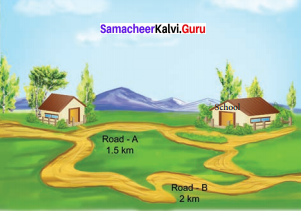 Road A
Road B
Answer:
By choosing road A kavitha could reach the school early as the distance is less compared to road B.

Question 2.
Look at the nearby picture 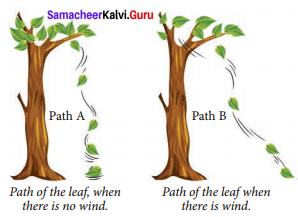 Samacheer Kalvi 7th Science Books Answers Question 3.
Uma and Priya are friends studying in the same school. After school hours, they go to the nearby playground, play games and return back home. One day Uma told that she would reach the playground after visiting her grandmother’s house. The path in which they took reached the playground is shown here. 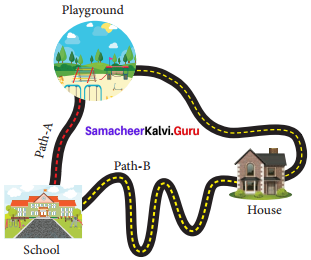 Motion, Force And Work Class 7 Exercise Question 4.
The path in which a rabbit ran is shown in figure. Find the distance and displacement of it in the two figures. Let us consider that each square is in an unit of one square meter. The rabbit starts from point A and reaches the point B. 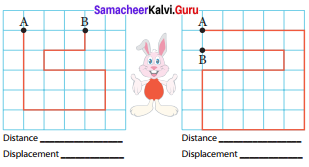 Std 7 Science Chapter 7 Motion Force And Work Question 5.
Here we can consider the starting point as A and while the object moves from A to B the displacement is considered to be positive and from B to A it is negative.
Answer the following questions:
Subha goes to the nearby playground from her home. 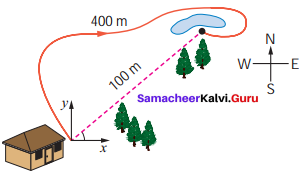 Class 7 Science Chapter 7 Motion Force And Work Question 1.
What is the distance she travelled?
Answer:
400 m

Samacheer Kalvi 7th Science Solutions Term 1 Chapter 1 Measuremen Question 3.
The distance travelled by an object is 15 km and its displacement is 15 km. What do you infer from this?
Answer:
The object moves in a straight line in one direction without turning back.

Motion, Force And Work Class 7 Exercise Question 5.
The person returns to the same position where he has started.
Answer:
(i.e.) The initial and the final position is same.

Std 7 Science Chapter 7 Motion Force And Work Question 6.
Answer the following questions:
(i) Calculate the velocity of a car travelling with a uniform velocity covering 100 m distance in 4 seconds.
Answer:

(ii) Usain Bolt covers 100 m distance in 9.58 seconds. Calculate his speed. Who will be the winner if Usain Bolt comepetes with a Cheetah running at a speed of 30 m/s

(iii) You are walking along east covering a distance of 4 m, then 2 m towards south, then 4 m towards west and at last 2 m towards north. You cover the total distance in 21 seconds, what is your average speed and average velocity?
Total distance covered = 12 m
Total time taken =21 seconds

Samacheer Kalvi 7th Science Solutions Term 1 Question 7.
(a) Change in speed
(b) Change in direction
(c) Change in both speed and direction

The velocity at different times of a train departing direction is given in the figure. Analyse this and complete the table .

Question 8.
My name is cheetah. I can run at a great speed. Do you know what my speed is? 25 m/s to 30 m/s. My speed changes from 0 to 20 m/s in 2 second. See how good my acceleration is !
From the above information, can you calculate the acceleration of the cheetah?
Answer:

The velocity of the object is decreasing by 20m/s in one second.

Question 10.
Imagine and write a story on your own for the given graph?

Answer:
Raghul and his father starting from home to the school by car. At the school gate, he stopped the car to drop Raghul. After 2 minutes he went back to home to pick up his mother. Then they both started to go to their work. On the way, they are waiting for the signal.

Question 4.
A car is moving along a straight road with uniform velocity which is the correct representation 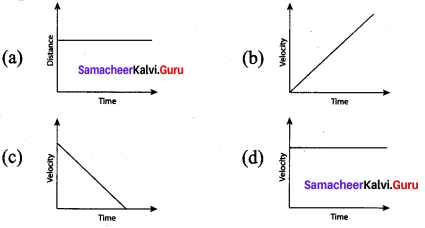 Question 6.
Velocity-time graph of an object is given below the object has
(a) uniform velocity
(b) uniform retardation
(c) uniform speed
(d) variable retardation
Answer:

Question 7.
Which one of the following graphs is showing an object is stationary? 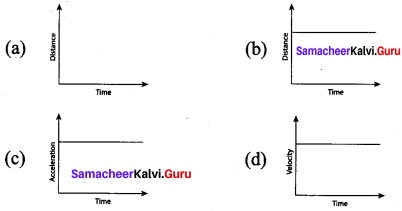 II. Fill in the Blanks.

Question 1.
Give one example where the displacement is zero but the distance travelled is not zero.
Answer:
When an object travels is a circular path (ie. the initial and positions are same).

Question 5.
Give one example for uniform acceleration.
Answer:
The motion of a freely falling object.

Question 6.
Give one example for non-uniform acceleration.
Answer:
The motion of a car on a crowded road.

Question 7.
Give an example for retardation or declaration.
Answer:
When a person applies brake on a moving car, its velocity decreases with time.

Question 8.
What are three types of stability of an object?
Answer:

Question 9.
Mention any two conditions for stability of a body?
Answer:

After 2 complete rounds, the body comes back to its initial position,
so, displacement = 0

Question 2.
What are the uses of graphical study of motion?
Answer:

Question 7.
Write note on the following :

Question 12.
What is uniform velocity? Give one example.
Answer:
A body has uniform velocity, if it covers equal displacement in the same direction in equal intervals of time. Eg. light travels through vacuum.

Question 13.
What is non-uniform velocity? Give example.
Answer:
If either speed or direction changes, then the velocity is non uniform. Eg. a train starting and moving out of the station. 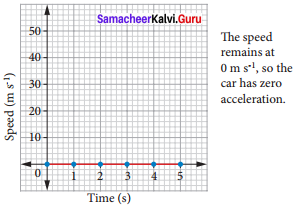 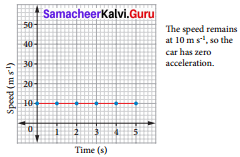 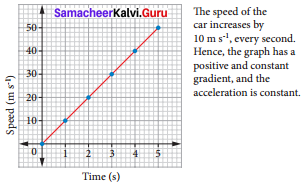 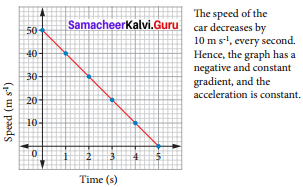 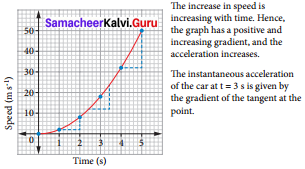