I. Choose the best answer:

Question 2.
One of the following is an example for a permanent magnet.
(a) Electromagnet
(b) Mumetal
(c) Soft iron
(d) Neodymium
Answer:
(d) Neodymium

Question 1.
Assertion: Iron filings are concentrated more at the magnetic poles.
Reason: The magnets are so sharp.
Answer:
(b) Both assertion and reason are true but reason is not the correct explanation of assertion.

Question 2.
Assertion: The Earth’s magnetic field is due to iron present in its core.
Reason: At a high temperature, a magnet loses its magnetic property or magnetism.
Answer:
(d) Assertion is false but the reason is true.

Correct statement:
The Earth’s magnetic field is due to the molten charged metallic fluid inside the Earth’s surface.

Question 1.
What is magnetic field?
Answer:
The space around a magnet in which its magnetic effect or influence is observed.

Question 2.
What is artificial magnet? Give examples.
Answer:
Magnets that are made by people in a laboratory or a factory are called artificial magnets.
Example:
Horse shoe magnet, bar magnet, U-shaped magnet, cylindrical magnets, disc magnets, ring magnets and electromagnets.

Question 4.
Earth acts as a huge bar magnet. Why? Give reasons.
Answer:

Question 1.
List out the uses of magnets in day-to-day life.
Answer:

Question 2.
How will you convert a ‘nail’ into a temporary magnet?
Answer:

Question 3.
Thalami Dharaga and Sangamithirai were playing with a bar magnet. They put the magnet down and it broke into four pieces. How many poles will be there?
Answer:
Each broken piece behaves like a separate magnet. Therefore, four pieces will have eight poles.

Question 1.
It is believed that the had known the property of magnet even before 200 BC.
(a) Indians
(b) Japanese
(c) Chinese
(d) Americans
Answer:
(c) Chinese

Question 2.
is the ore of iron which is the strongest natural magnet.
(a) Iron oxide
(b) Iron sulphide
(c) Ferrite
(d) Columbine
Answer:
(a) Iron oxide

Question 1.
What is the other name of lodestone?
Answer:
Magnetite. (Iron oxide)

Question 6.
Name the strongest and the most powerful magnets on the Earth.
Answer:
Neodymium magnets.

Question 10.
What is meant by a mag-stripe?
Answer:
The strip on the back of a credit card / debit card is a magnetic strip, often called mag-stripe.

Question 4.
What is magnetization?
Answer:

Question 5.
Write a note on Magnetar.
Answer:
The most powerful magnet in the Universe is actually a neutron star called Magnetar:

Question 6.
Mention the properties of a magnet.
Answer:
Repulsive:

Question 8.
Mention the three types of iron ores.
Answer:
Hematite (69% of Iron), Magnetite (72.4% of Iron) and Side-rite (48.2% of Iron). Magnetite is an oxide ore of iron with the formula Fe 304. Among these ores, Magnetite has more magnetic property.

Question 1.
Write a note on: 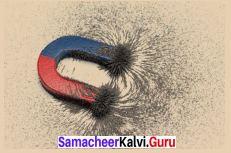 Conclusion:
This shows that the attractive property of a magnetis more at the poles. 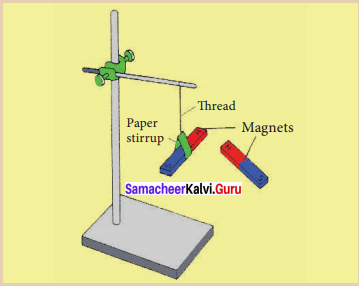 Suspend a bar magnet from a rigid support using a thread. Ensure that there are no magnetic substances placed near it. Gently disturb the suspended magnet. Wait for a moment, let it oscillate. In a short time, it will come to rest. You can see that the north pole of the magnet is directed towards the geographic north. Repeat the procedure a number of times. You will observe that the magnet is oriented in the same direction. 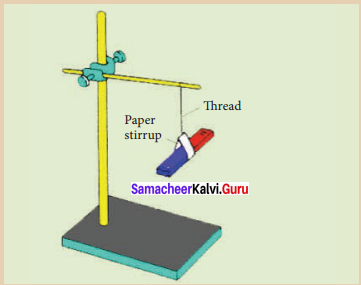 Answer:
The magnet is oriented in the same direction. This experiment shows that a freely suspended bar magnet always aligns itself in the geographic north-south direction.

Spread some iron filings which are collected from the sand uniformly on a sheet of white paper placed on a table. Place a bar magnet below the white sheet. Gently tap the table. What do you see? You can see the pattern as shown in the figure. 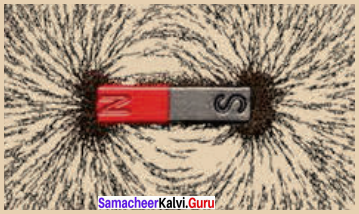 Spread some iron pins, stapler pins, iron nails, small pieces of paper, a scale, an eraser and a plastic cloth hanger on a wooden table. Place a magnet nearby these materials. What do you observe? List out which of these things are attracted by the magnet? Which objects are not attracted? Tabulate your observations.
Answer:
Aim:
To understand the behavior of magnetic and non-magnetic materials.
1. Materials attracted by magnet:

2. Materials not attracted by magnet: