Question 1.
A phenomenon in which an element exists in different modification in same physical state is called ……………….
(a) isomerism
(b) allotropy
(c) catenation
(d) crystallinity
Answer:
(b) allotropy

Question 1.
What is catenation? How does carbon form catenated compounds?
Answer:
Catenation is the binding of an element to itself or with other elements through covalent bonds to form open chain or closed chain compounds. .
Carbon is the most common element which undergoes catenation and forms long chain compounds. Carbon atom links repeatedly to itself through covalent bond to form linear chain, branched chain or ring structure. This property of carbon itself is the reason for the presence of large number of organic carbon compounds. So organic chemistry essentially deals with catenated carbon compounds. 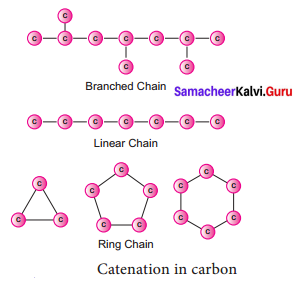 Question 2.
What are the chemical reactions of carbon?
Answer:
Elemental carbon undergoes no reaction at room temperature and limited number of reactions at elevated temperatures. But its compounds undergo large number of reactions even at room temperature.
Oxidation – (Reaction with oxygen)
Carbon combines with oxygen to form its oxides like carbon monoxide (CO) and carbon dioxide (CO2) with evolution of heat. Organic carbon compounds like hydrocarbon also undergo oxidation to form oxides and steam with evolution of heat and flame. This is otherwise called Burning,
2C(s) + O2(g) ➝ 2CO(g) + heat
C(s) + O2(g) ➝ CO2(g) + heat

Question 1.
Why do carbon exist mostly in combined state?
Answer:
Carbon is an element that can form many different compounds, as each carbon atom can form 4 chemical bonds with other atoms and because the carbon atom is just the right size to fit in comfortably as parts of very large molecules.

Question 2.
When a carbon fuel burns in less aerated room, it is dangerous to stay there. Why?
Answer:
When carbon fuel bums in less aerated room, carbon monoxide is formed. When people are exposed to CO, it enters into human body through breathing and affects the function of haemoglobin. CO displaces oxygen from haemoglobin thereby stops its function (supply of oxygen to the parts of body) leading to death.

Question 3.
Explain how dioxins are formed? Which plastic type they are linked to and why they are harmful to humans?
Answer:
Burning PVC plastic releases dioxins which are one of the most dangerous chemicals known to humans.

Question 4.
Yugaa wants to bdy a plastic water bottle. She goes to the shop and sees four different kinds of plastic bottles with resin codes 1, 3, 5 and 7. Which one should she buy? Why?
Answer:
Yuga should by plastic bottle with resin code 5, as it is considered to be more safer. 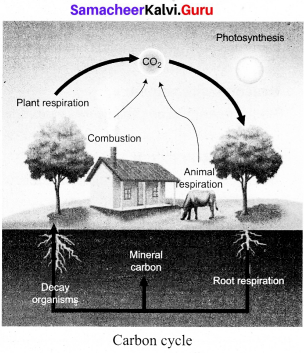 The phenomenon in which the same molecular formula may exhibit different structural arrangements is called isomerism.
The given formula C2H6O can be represented with two kinds of arrangements.

Question 3.
Write a short note on graphene.
Answer:
Graphene is most recently produced allotrope of carbon which consists of honeycomb-shaped hexagonal ring repeatedly arranged in a plane. Graphene is the thinnest compound known to man at one atom thick. It is the lightest material known (with 1 square metre weighing around 0.77 milligrams) and the strongest compound discovered (100-300 times stronger than steel).

It is the best conductor of heat at room temperature. Layers of graphene are stacked on top of each other form graphite, with an interplanar spacing of 0.335 nanometres. The separate layers of graphene in graphite are held together by Vander Waals forces.

Question 4.
What is carbon monoxide? Why is it toxic?
Answer:
Carbon monoxide is a toxic gas of carbon. When fuels undergo incomplete combustion, it results in the formation of carbon monoxide. It is released into the atmosphere from various sources like vehicle fuels, domestic fuels, industries, furnaces, etc, cigarette smoking also is a source of carbon monoxide.

Carbon monoxide is an odorless toxic gas. When CO enters the human body through breathing, it affects the function of hemoglobin. CO displaces oxygen from hemoglobin thereby stopping its function, i.e., a supply of oxygen is blocked to the parts of the body, thereby leading to death.

Question 6.
What is a resin code? What is the need to display them on plastic articles?
Answer:
The resin code is a set of symbols appearing on plastic products that is helpful in the identification of the type of polymer used to make that product.

Platic needs to be recycled or disposed of safely. Each plastic is composed of a different polymer or set of molecules. Different molecules do not mix when plastics are recycled. For this reason, plastics need to be segregated before recycling. These resin codes help in easy segregation of plastic products to be recycled.

Question 7.
A survey showed that one time use plastic items were among the top 10 plastic items found in garbage washed up from oceans. Can this be true? Explain how.
Answer:
Use and throwaway plastics cause short and long time environmental damage. These items like plastic carry bags, straws, plates, spoons, pouches, etc., take a few seconds to be made in a factory, but can stay in the environment forever a 1000 years. These items block drains and pollute water bodies. These plastics break down into pieces that are smaller than 5mm in diameter. These microplastics pollute the ocean and harm the marine life, who mistake them as their food.

These one time use plastics when disposed carelessly are carried to the ocean by winds, cause harm to marine life and are brought back to the shore by waves.