Choose the most appropriate answer from the given four alternatives and write the option code and the corresponding answer.

Question 7.
Use of hot air balloon in the meteorological observatory is an application of
(a) Kelvin’s Law
(b) Brown’s Law
(c) Boyle’s Law
(d) Newton’s Law
Answer:
(b) Brown’s Law

Question 12.
Which of the following compound has same percentage of Carbon as that of ethylene (C2H4)?
(a) benzene
(b) ethane
(c) propene
(d) ethyne
Answer:
(a) benzene

Question 16.
State and explain Pauli’s Exclusion Principle.
Answer:
Pauli’s exclusion principle states that “No two electrons in an atom can have the same set of values of all four quantum numbers”.
Illustration: H(Z = 1) Is1.

Question 17.
Define – Valency.
Answer:
The valency of an element may be defined as the combining capacities of elements. The electrons present in the outermost shell are called valence electrons and these electrons determine the valency of the atom.

Question 18.
What are ideal gases?
Answer:

Question 19.
State the third law of Thermodynamics.
Answer:
It states that the entropy of pure crystalline substance at absolute zero is zero, (or)

It can be stated as “it is impossible to lower the temperature of an object to absolute zero in a finite number of steps”. Mathematically \(\lim _{T \rightarrow 0} S=0\)

Question 20.
What is called Bond Length? Name the techniques through which the length of a bond can be determined.
Answer:
The distance between thS nuclei of two covalently bonded atoms is called bond length. For e.g„ in a covalent molecule A – B, the bond length is equal to the sum of the radii of bonded atoms, i.e., γA + γB = bond length.

The length of a bond can be determined by spectroscopic, x-ray diffraction and electron- diffraction techniques.

Question 23.
Define – Acid rain.
Answer:
Rain water has a pH of 5.6 due to the dissolution of CO2 into it. Oxides of sulphur and nitrogen in the atmosphere may be absorbed by droplets of water that make up the clouds and get chemically converted into sulphuric acid and nitric acid. Due to this the pH of rain water drops below the level of 5.6. Hence it is called acid rain.

Question 27.
How is Tritium prepared?
Answer:
It occurs naturally as a result of nuclear reactions induced by cosmic rays in the upper atmosphere.

Question 28.
Define – Le-Chatelier principle.
Answer:
It states that “If a system at equilibrium is disturbed, then the system shifts itself in a direction that nullifies the effect of that disturbance.

Question 33.
Give the structural formula for the following compounds.
(a) m – dinitrobenzene
(b) p – dichlorobenzene
(c) 1,3, 5, Tri-methyl Benzene
Answer:

Answer all the questions.

Question 34.
(a) (i) Calculate oxidation number of oxygen in H2O2.
(ii) Write the de-Broglie equation.
[OR]
(b) (i) State and explain Dobereiner’s “Triad”.
(ii) Complete the following equation.
(a)

The equation (3) represents the wavelength of photons whose momentum is given by. me. (Photons have zero rest mass).

(b) (i) Johann Dobereiner noted that elements with similar properties occur in groups of three which he called triads. It was seen that invariably, the atomic weight of the middle number of the triad was nearly equal to the arithmetic mean of the weights of the other two numbers of the triad. For e.g.,

Question 35.
(a) (i) Among the alkaline earth metals BeO is insoluble in water but other oxides are soluble. Why?
(ii) State Diffusion Law.
[OR]
(b) (i) Calculate the entropy change during the melting of one mole of ice into water at 0°C. Enthalpy of fusion of ice is 6008 J mol-1.
(ii) Write the balanced chemical equation for Kc = \(\frac{\left[\mathbf{C a O}_{(\mathbf{s})}\right]\left[\mathbf{C O}_{2(\mathbf{g})}\right]}{\left[\mathbf{C a C O}_{3(\mathbf{(})}\right]}\)
(a) (i) Lattice energy of BeO is comparatively higher than the hydrogen energy. Therefore it is almost insoluble in water. Whereas other alkaline earth metals oxides have high hydration energy. Hence they are soluble in water.

(ii) Diffusion is the spreading of molecules of a substance throughout a space or a second substance. Diffusion refers to the ability of the gases to mix with each other. E.g., Spreading of something such as brown tea liquid spreading through the water in a tea cup. 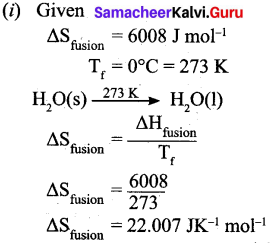 (b) (i) Identify the cis and trans isomers for the following compounds.

(ii) Explain with example the Positive Mesomeric Effect.
Answer:
(a) (i) Only the less soluble gases obeys Henry’s law. NH3 and HC1 react with (or soluble) water and hence does not obey Henry’s law.

Question 37.
(a) (i) Write the IUPAC name for the following compound.

(ii) What are Nucleophiles and Electrophiles? Give one example each.

(b) (i) How will you get the following products with the given reactants?
(A) Acetylene → Benzene
(B) Phenol → Benzene
(C) Benzene → Toluene
(ii) Write any two different components you get during fractional distillation of Coal Tar at any two different temperatures.
Answer:
(a)

(ii) Coal tar is a viscous liquid obtained by the pyrolysis of coal. During fractional distillation, coal tar is heated and distills away its volatile compounds, namely, benzene, toluene, xylene in the temperature range of 350 K to 443 K. These vapours are. collected at the upper part of the fractionating column.