Question 2.
From the displacement – time graph shown below, particle is ……….. .

Question 19.
Discuss the possibilities of work done to be zero.
Answer:
Work done is zero in the following cases.
(i) When the force is zero (F = 0). For example, a body moving on a horizontal smooth frictionless surface will continue to do so as no force (not even friction) is acting along the plane. (This is an ideal situation.)

(ii) When the displacement is zero (dr = 0). For example, when force is applied on a rigid wall it does not produce any displacement. Hence, the work done is zero as shown in figure. 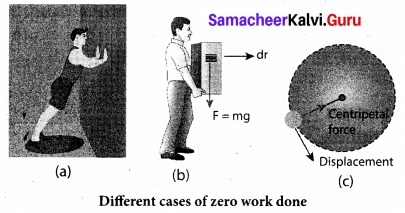 Question 25.
State and prove Archimedes principle.
Answer:
Archimedes Principle: It states that when a body is partially or wholly immersed in a fluid, it experiences an upward thrust equal to the weight of the fluid displaced by it and its upthrust acts through the centre of gravity of the liquid displaced.

Proof: Consider a body of height ‘h’ lying inside a liquid of density p, at a depth x below the free surface of the liquid. Area of cross section of the body is V. The forces on the sides of the body cancel out. 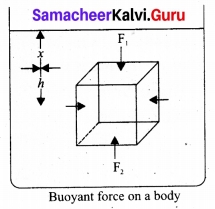 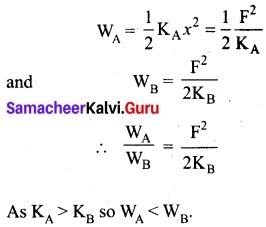 Question 33.
A cylindrical tank of height 0.4 m is open at the top and has a diameter 0.16 m. Water is filled in it up to height of 0.16 m. Find the time taken to empty the tank through a hole of radius 5 × 10-3 m in its bottom.
Answer:
The velocity of efflux through the hole v = \(\sqrt{2gh}\)
Let R, r be the radius of cylindrical tank and hole and ‘dh’ is the decrease in height of water in time ‘dt’ sec use principle of continuity at the top and hole

integrating it within the condition of problem, 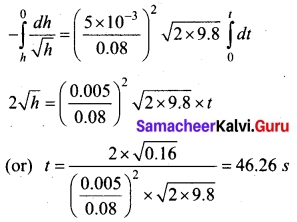 Question 34 (a).
Show that the path of oblique projection is parabola.
Answer:
This projectile motion takes place when the initial velocity is not horizontal, but at some angle with the vertical, as shown in Figure.(Oblique projectile)
Examples:

Consider an object thrown with initial velocity at an angle θ with the horizontal.
Then,
u = u\(\vec{i}\) + u\(\vec{j}\)
where u = u cos θ is the horizontal component and u = u sin θ, the vertical component of velocity.

Since the acceleration due to gravity is in the direction opposite to the direction of vertical component uy, this component will gradually reduce to zero at the maximum height of the projectile. At this maximum height, the same gravitational force will push the projectile to move downward and fall to the ground. There is no acceleration along the x direction throughout the motion. So, the horizontal component of the velocity (ux = u cos θ) remains the same till the object reaches the ground. 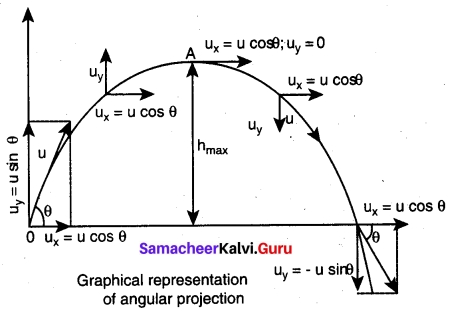 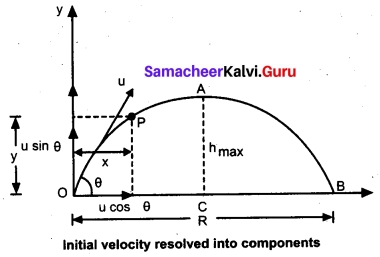 Thus the path followed by the projectile is an inverted parabola.

(b) Explain the motion of block connected by a string in vertical motion.
Answer: 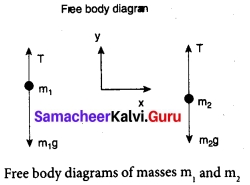 Case 1: Vertical motion: Consider two blocks of masses m1 and m2 (m1 > m2) connected by a light and inextensible string that passes over a pulley as shown in figure. 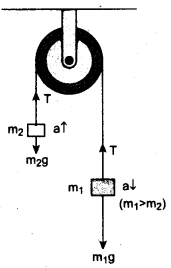 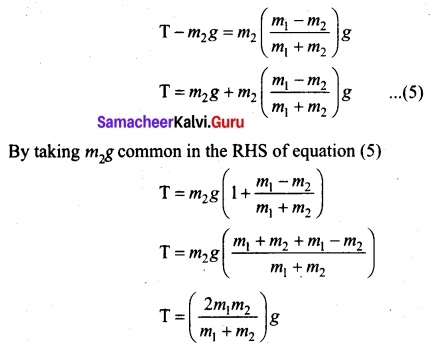 (ii) To move an object-push or pull? Which is easier? Explain.
Answer:
When a body is pushed at an arbitrary angle θ (0 to \(\frac{π}{2}\)), the applied force F can be
resolved into two components as F sin θ parallel to the surface and F cos θ perpendicular to the surface as shown in figure. The total downward force acting on the body is mg + F cos θ. It implies that the normal force acting on the body increases. Since there is no acceleration along the vertical direction the normal force N is equal to
NPush = mg + F cos θ ….(1)
As a result the maximal static friction also increases and is equal to
\(f_{x}^{\max }\) = μrNPush = μs(mg + F cos θ ) ……(2)
Equation (2) shows that a greater force needs to be applied to push the object into motion. 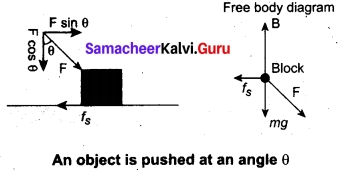 When an object is pulled at an angle θ, the applied force is resolved into two components as shown in figure. The total downward force acting on the object is
NPull = mg – F cos θ ……..(3) 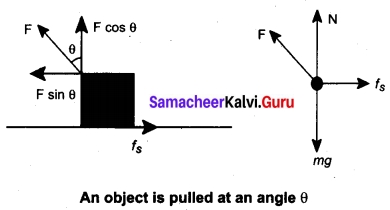 Equation (3)shows that the normal force is less than NPull. From equations (1) and (3), it is easier to pull an object than to push to make it move.

(b). Describe the vertical oscillations of a spring.
Answer:
Vertical oscillations of a spring: Let us consider a massless spring with stiff ness constant or force constant k attached to a ceiling as shown in figure. Let the length of the spring before loading mass m be L. If the block of mass m is attached to the other end of spring, then the spring elongates by a length l. Let F1, be the restoring force due to stretching of spring. Due to mass m, the gravitational force acts vertically downward. We can draw free-body diagram for this system as shown in figure. When the system is under equilibrium,
F1+ mg = 0 ……(1)
But the spring elongates by small displacement 1, therefore,
F1 ∝ l ⇒ F1 = -kl …(2)
Substituting equation (2) in equation (1), we get – kl + mg = 0
-kl + mg = 0
mg = l or \(\frac{m}{k}\) = \(\frac{l}{g}\) …….(3) 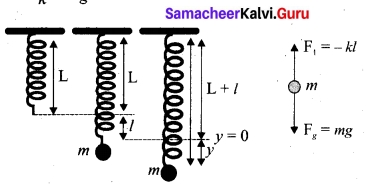 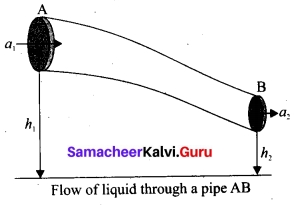 The above equation is the consequence of the conservation of energy which is true until there is no loss of energy due to friction. But iri practice, some energy is lost due to friction. This arises due to the fact that in a fluid flow, the layers flowing with different velocities exert frictional forces on each other. This loss of energy is generally converted into heat energy. Therefore, Bernoulli’s relation is strictly valid for fluids with zero viscosity or non-viscous liquids. Notice that when the liquid flows through a horizontal pipe, then
h = 0 ⇒ \(\frac{P}{ρg}\) +\(\frac{1}{2}\) \(\frac{V_2}{g}\) = Constant

(b) Write down the postulates of kinetic theory of gases.
Answer:

Question 38 (a).
Discuss in detail the energy in simple harmonic motion.
Energy in simple harmonic motion:
Answer:
(a) Expression for Potential Energy
For the simple harmonic motion, the force and the displacement are related by Hooke’s law
\(\vec{F}\) = -k\(\vec{r}\)
Since force is a vector quantity, in three dimensions it has three components. Further, the force in the above equation is a conservative force field; such a force can be derived from a scalar function which has only one component. In one dimensional case
F = -kx ……(1)
We know that the work done by the conservative force field is independent of path. The potential energy U can be calculated from the following expression.
F = –\(\frac{dU}{dx}\)
Comparing (1) and (2), we get
–\(\frac{dU}{dx}\) = -kx
dU = kx dx
This work done by the force F during a small displacement dx stores as potential energy 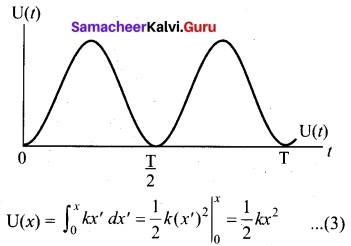 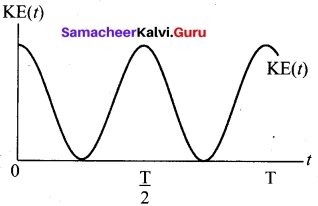 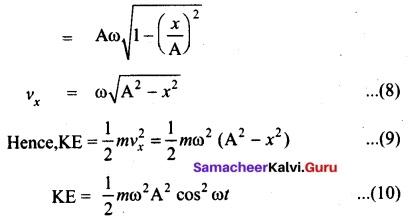 This variation with time is shown in figure. 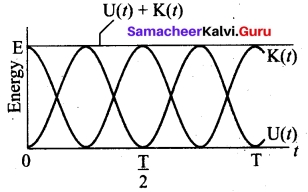