Question 2.
Match items in column -II with the items of column – II and assign the correct code. 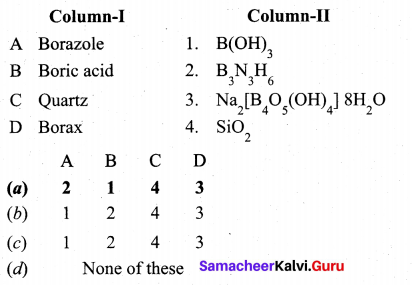 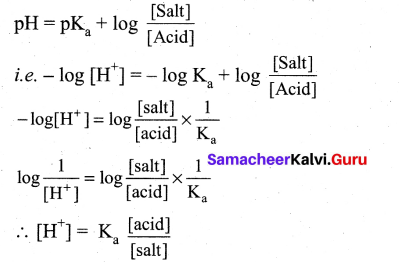 Question 22.
Can we use nucelophiles such as NH3,CH3O– for the Nucleophilic substitution of alcohols
Answer:
Increasing order of nucelophilicity,

Question 23.
Aniline does not undergo Friedel – Crafts reaction. Explain.
Answer:
Aniline being a Lewis base reacts with Lewis acid AlCl3 to form a salt.

Due to the presence of a positive charge on N-atom in the salt the group – NH2 AlCl– acts as a strongly deactivating group. As a result, it reduces the electron density in the benzene ring and which inhibits the electrophilic substitution reaction. Therefore aniline does not undergo Friedel – Crafts reaction.

Question 24.
What are hormones? Give examples.
Answer:
Hormone is an organic substance that is secreted by one tissue into the blood stream and induces a physiological response in other tissues. It is an inter cellular signaling molecule. Virtually every process is a complex organism is regulated by one or more hormones. Example, insulin, epinephrine, estrogen, androgen etc. 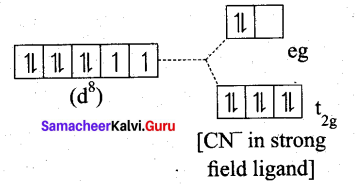 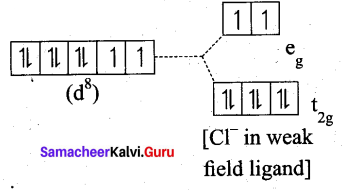 Question 28.
Calculate the number of atoms per unit cell of bcc type.
Answer: 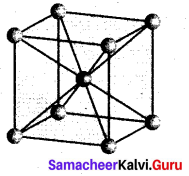 Question 31.
Write the structure of the aldehyde, carboxylic acid and ester that yield 4 – methylpent -2-en-l-ol.
Answer:
(i) Aldehyde yield 4-methylpent-2-en-l-ol is,

The above shown compounds udergo reduction reaction to yield 4-methylpent-2-en-l-ol.

Question 32.
Predict the major product that would’ be obtained on nitration of the following compounds. 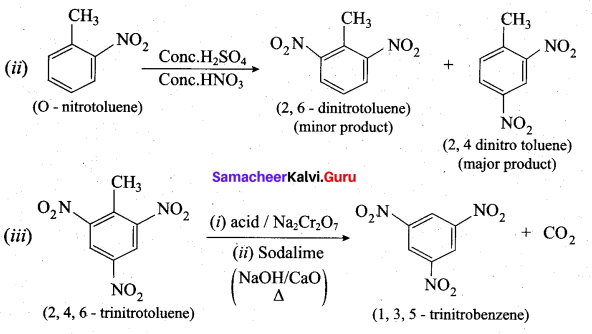 Question 33.
What are the biological functions of nucleic acids?
Answer:

Question 34.
(a) (i) Explain the observations from the Ellingham diagram. (3)
(ii) Write a short note on anamolous properties of the first element of p-block. (2)
[OR]
(b) (i) Write the products formed in the reaction of concentrated nitric acid with zinc. (2)
(ii) d-block elements readily form complexes. Give reason. (3)
Answer:
(a) (i) 1. For most of the metal oxide formation, the slope is positive. It can be explained as follows.
Oxygen gas is consumed during the formation of metal oxides which results in the decrease in randomness. Hence, ∆S becomes negative and it makes the term, T∆S positive in the straight line equation.

2. The graph for the formation of carbon monoxide is a straight line with negative slope. In this case ∆S is positive as 2 moles of CO gas is formed by the consumption of one mole of oxygen gas. It indicates that CO is more stable at higher temperature.

4. There is a sudden change in the slope at a particular temperature for some metal oxides like MgO, HgO. This is due to the phase transition (melting or evaporation).

(ii) In p-block elements the first member of each group differs from the other elements of the corresponding group. The following factors are responsible for this anomalous behaviour.

The first member of the group-13, boron is a metalloid while others are reactive metals. Moreover, boron shows diagonal relationship with silicon of group 14. The oxides of boron and silicon are similar in their acidic nature.

(ii) 1. Transition elements (d-block elements) have a tendency to form coordination • compounds (complexes) with a species that has an ability to donate an electron pair to
form a coordinate covalent bond.

2. Transition metal ions are small and highly charged and they have vacant low energy orbitals to accept an electron pair donated by other groups. Due to these properties, transition metals form large number of complexes.

(ii) Piezo electricity is the appearance of an electrical potential across the sides of a crystal. When you subject it to mechanical stress. The word piezo electricity means electricity resulting from pressure and latent heat. Even the inverse is possible which is known as inverse piezo electric effect.

Question 36.
(a) Derive an expression for Nernst equation. (5)
[OR]
(b) Describe adsorption theory of catalysis. (5)
(a) Nernst equation is the one which relates the cell potential and the concentration of the specie:
involved in an electrochemical reaction.
Let us consider an electrochemical cell for which the overall redox reaction is,
xA+yB ⇌ lC+mD
The reaction quotient Q is,

(b) Adsorption theory:
Langmuir explained the action of catalyst in heterogeneous catalysed reactions based on adsorption. The reactant molecules are adsorbed on the catalyst surfaces, so this can also be called as contact catalysis.
According to this theory, the reactants are adsorbed on the catalyst surface to form an activated complex which subsequently decomposes and gives the product.
The various steps involved in a heterogeneous catalysed reaction are given as follows:

Question 37.
(a) (i) What is the major product obtained when two moles of ethyl magnesium bromide is treated with methyl benzoate followed by acid hydrolysis. (3)
(ii) What are essential and non-essential amino acids? Give one example of each type. (2)
[OR]
(b) How are the following conversions effected (5)
1. propanal into butanone
2. Hex-3-yne into hexan-3-one
3. phenylmethanal into benzoic acid
4. phenylmethanal into benzoin
Answer:
(a)

(b) 1. Propanal into butanone:

Question 38.
(a) Identify A to E in the following frequency. of reactions. (5)

[OR]
(b) (i) What are the biological importance of proteins? (3)
(ii) Name one substance which can act as both analgesic and antipyretic. (2)
(a)

(ii) Aspirin (acetylsalicylic acid) is a chemical substance which lowers body temperature (to normal) and also reduces body pain. Therefore it acts as both antipyretic and analgesic.