Question 1.
Which one of the following ore is best concentrated by froath – floatation method?
(a) Magnetite
(b) Haematite
(c) Galena
(d) Cassiterite
Answer:
(c) Galena

Question 2.
Which compound is used as flux in metallurgy?
(a) Boric acid
(b) Borax
(c) Diborane
(d) BF3
Answer:
(b) Borax

Question 6.
The fraction of the total volume occupied by the atoms in a fcc is

Question 12.
But-2 ene on ozonolyis followed by subsequent cleavage with Zn and water gives …………….
(a) ethanal
(b) Propanal
(c) Propanone
(d) Methanal
Answer:
(a) ethanal

Question 15.
Nylon is an example of
(a) Polyamide
(b) Polythene
(c) Polyester
(d) Polysaccharide
Answer:
(a) Polyamide

Question 16.
Write a test to identify borate radical?
Answer:
When boric acid or borate salt is heated with ethyl alcohol in presence of concentrated H2SO4, an ester triethyl borate is formed. The Vapour of this ester bums with a green edged flame and this reaction is used to identify the presence of borate.

Question 18.
What are ionisation isomers? Explain with an example.
Answer:
1. Ionisation isomerism arises when an ionisable counter ion (simple ion) itself can act as a ligand.

2. The exchange of such counter ions with one or more ligands in the coordination entity will result in ionisation isomers. These isomers will give different ions in solution.

3. For example, consider the coordination compound [Pt (en)2 Cl2]Br2. In this compound, both Br– and Cl– have the ability to act as a ligand and the exchange of these two ions result in a different isomer [Pt(en)2Br2]Cl2. In solution, the first compound gives Br– ions while the later gives Cl ions and hence these compounds are called ionization isomers.

If the reaction is carried out with the large excess of water, there is no significant change in the concentration of water during hydrolysis, i.e., concentration of water remains almost a constant.
Now we can define k [H2O] = k’
.’. The above rate equation becomes, Rate = k’ [CH3COOCH3]
Thus it follows first order kinetics.

Question 20.
State Faraday’s second law of electrolysis.
Answer:
When the same quantity of charge is passed through the solutions of different electrolytes, the , amount of substances liberated at the respective electrodes are directly proportional to their electrochemical equivalents.

Question 21.
How will you convert glycerol into acrolein?
Answer:

Question 22.
Give any four differences between DNA and RNA.
DNA

Question 25.
Explain the electro metallurgy of aluminium.
Answer:
Electrochemical extraction of aluminium -Hall-Herold process: In this method, electrolysis is carried out in an iron tank lined with carbon, which acts as a cathode. The carbon blocks immersed in the electrolyte acts as a anode. A 20% solution of alumina, obtained from the bauxite ore is mixed with molten cyrolite and is taken in the electrolysis chamber. About 10% calcium chloride is also added to the solution. Here calcium chloride helps to lower the melting point of the mixture. The fused mixture is maintained at a temperature of above 1270 K. The chemical reactions involved in this process are as follows:

Due to the above two reactions, anodes are slowly consumed during the electrolysis. The pure aluminium is formed at the cathode and settles at the bottom. The net electrolysis reaction can be written as follows:

Question 26.
Give the uses of helium.
Answer:

(ii) The chromyl chloride vapours are dissolved in sodium hydroxide solution and then acidified with acetic acid and treated with lead acetate. A yellow precipitate of lead chromate is obtained. Cr02Cl2 + 4NaOH -► Na2Cr04

Oxidation half cell: The metallic zinc strip that dips into an aqueous solution of zinc sulphate taken in a beaker.
Reduction half cell: A copper strip that dips into an aqueous solution of copper sulphate taken in a beaker.
Joining the half cell : The zinc and copper strips are externally connected using a wire through a switch (k) and a load (example: volt meter). The electrolytic solution present in the cathodic and anodic compartment are connected using an inverted U tube containing a agar-agar gel mixed with an inert electrolyte such as KCl, Na2SO4 etc., The ions of inert electrolyte do not react with other ions present in the half cells and they are not either oxidised (or) reduced at the electrodes. The solution in the salt bridge cannot get poured out, but through which the ions can move into (or) out of the half cells.

When the switch (k) closes the circuit, the electrons flows from zinc strip to copper strip. This is due to the following redox reactions which are taking place at the respective electrodes.

Anodic oxidation:- The electrode at which the oxidation occur is called the anode. In Daniel cell, the oxidation take place at zinc electrode, i.e., zinc is oxidised to Zr2+ ions and the electrons. The Zn2+ ions enters the solution and the electrons enter the zinc metal, then flow through the external wire and then enter the copper strip. Electrons are liberated at zinc electrode and hence it is negative (- ve).
Zn(s) → Zn2++(aq) + 2e–
(loss of electron-oxidation)

Cathodic reduction:
As discussed earlier, the electrons flow through the circuit from zinc to copper, where the Cu ions in the solution accept the electrons, get reduced to copper and the same get deposited on the electrode. Here, the electrons are consumed and hence it is positive (+ve). 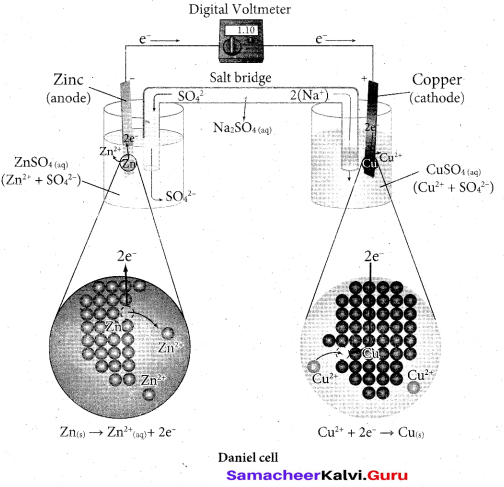 Salt bridge: -The electrolytes present in two half cells are connected using a salt bridge. We have learnt that the anodic oxidation of zinc electrodes results in the increase in concentration of Zn2+ in solution, i.e., the solution contains more number of Zn2+ ions as compared to SO2-4 and hence the solution in the anodic compartment would become positively charged. Similarly, the solution in the cathodic compartment would become negatively charged as the Cu2+ ions are reduced to copper i.e., the cathodic solution contain more number of SO2-4 ions compared to Cu2+ .

(ii) In oxidation of chloroform, ethanol decreases the rate of the reaction and ethanol act as negative catalyst.

(i) Consider the reactant of a reaction is present in one solvent and the other reactant is present in an another solvent. The reaction between them is very slow, if the solvents are immisible.

(iii) But for large scale preparation of any product, use of a third solvent is not convenient as it . may be expensive. For such problems, phase transfer catalysis provides a simple solution, which avoids the use of solvents.

(iv) It directs the use of a phase transfer catalyst (a phase transfer reagent) to facilitate transport of a reactant in one solvent to other solvent where the second reactant is present. As the reactants are now brought together, they rapidly react and form the product.

(v) Example : Substitution of Cl– and CN– in the following reaction.

(vii) So phase transfer catalyst, speeds up the reaction by transporting one reactant from one phase to another.

Question 31.
Explain the mechanism of Aldol condensation of acetaldehyde.
Answer:
In presence of dilute base NaOH, or KOH, two molecules of an aldehyde or ketone having α – hydrogen add together to give β- hydroxyl aldehyde (aldol) or β – hydroxyl ketone (ketol). The reaction is called aldol condensation reaction.

Mechanism
The mechanism of aldol condensation Of acetaldehyde takes place in three steps.
Step 1: The carbanion is formed as the a – hydrogen atom is removed as a proton by the base.

Step 2: The carbanion attacks the carbonyl carbon of another unionized aldehyde to form an alkoxide ion.

Step 3: The alkoxide ion formed is protonated by water to form aldol.

The aldol rapidly undergoes dehydration on heating with acid to form a, p unsaturated aldehyde.

Question 32.
Explain the preparation of Nylon – 6,6 and Buna- S.
Answer:
Nylon 6,6 can be prepared by mixing equimolar adipic acid and hexamethylene diamine. With the elimination of water to form amide bonds.

Buna – S is prepared by the polymerisation of buta -1,3 – diene and styrene in the ratio of 3:1 in the presence of sodium.

Question 33.
Identify A to C in the following sequence.

Question 34.
(a) (i) Explain how gold ore is leached by cyanide process
(ii) Explain the classification of lnosilicates

Example: Spodumene – LiAl(SiO3)2 Double chain silicates (or amphiboles): These silicates contains [Si4O11] n6n-. ions. In these silicates there are two different types of tetrahedra : (i) Those sharing 3 vertices (ii) those sharing only 2 vertices.

Examples:
Asbestos: These are fibrous and noncombustible silicates. Therefore they are used for thermal insulation material, brake linings, construction material and filters. Asbestos being carcinogenic silicates, their applications are restricted. 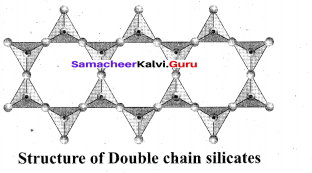 (b) (i) Each halogen combines with other halogens to form a series of compounds called interhalogen compounds, e.g., ClF3, IF5, IF7
(ii) Potassium permanganate is prepared from pyrolusite (MnO2) ore. The preparation involves the following steps.

Chemical oxidation: In this method potassium manganate is treated with ozone (O3) or chlorine to get potassium permanganate.

The purple coloured solution is concentrated by evaporation and forms crystals of potassium permanganate on cooling.

Question 35.
(a) (i) Explain [Fe(CN)6]3- is paramagnetic, using Crystal Field theory
(ii) What is schottky detect?

(ii) Schottky defect arises due to the missing of equal number of cations and anions from the crystal lattice. This effect does not change the stoichiometry of the crystal.Ionic solids in which the cation and anion are of almost of similar size show schottky defect. Example: NaCl. 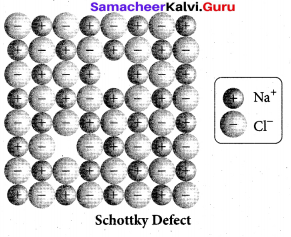 Presence of large number of schottky defects in a crystal, lowers its density.
For example, the theoretical density of vanadium monoxide (VO) calculated using the edge length of the unit cell is 6.5 g cm-3 , but the actual experimental density is 5.6 g cm-3 .It indicates that there is approximately 14% Schottky defect in VO crystal. Presence of Schottky defect in the crystal provides a simple way by which atoms or ions can move within the crystal lattice.

3. [Acid] and [Salt] represent the initial concentration of the acid and salt, respectively used to prepare the buffer solution.

4. Taking logarithm on both sides of the equation

(b) How the following conversions are effected?
(i) Phenol → Salicylaldehvde
(ii) Phenol → Phenolphthalein
(iii) Glycol → 1.4dioxane
Answer:
(a) (i) The intermediate compound formation theory:
A catalyst acts by providing a new path with low energy of activation.. In homogeneous catalysed reactions a catalyst may combine with one or more reactant to form an intermediate which reacts with other reactant or decompose to give products and the
catalyst is regenerated.
Consider the reactions:
A+B → AB (1)
A+C →AC (intermediate) (2)
C is the catalyst
AC+B → AB+C (3)

Activation energies for the reactions (2) and (3) are lowered compared to that of (1). Hence the formation and decomposition of the intermediate accelerate the rate of the reaction.

(ii) Phenol → Phenolphthalcin:
On heating phenol with phthalic anhydride in presence of con.H2S04, phenolphthalein
is obtained.

(b) Explain the structure of Fructose.
Answer:
(a) (i) Mustard oil reactions:
When primary amines are treated with carbon disulphide (CS2), N – alkyldithio carbonic acid is formed which on subsequent treatment with HgCl2, give an alkyl isothiocyanate.

(ii) Carbylamine reaction:
Aliphatic (or) aromatic primary amines react with chloroform and alcoholic KOH to give isocyanides (carbylamines), which has an unpleasant smell. This reaction is known as carbylamines test. This test is used to identify the primary amines.

On oxidation with nitric acid, it gives glycolic acid and tartaric acids which contain smaller number of carbon atoms than in fructose.

This shows that a keto group is present in C-2. It also shows the presence of 10 alcoholic groups at C- 1 and C- 6. From the above reaction the structure of fructose is 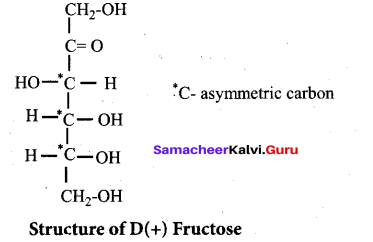 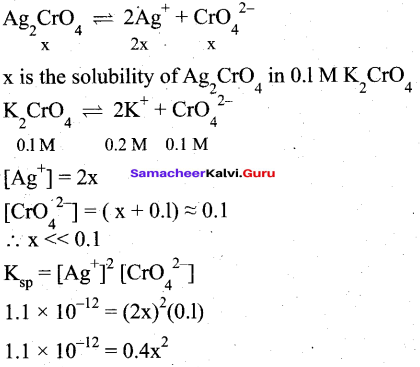 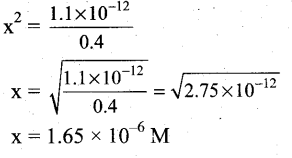