Question 7.
Water which is absorbed by roots is transported to aerial parts of the plant through ________.
(a) phloem
(b) epidermis
(c) cortex
(d) xylem
Answer:
(d) xylem

Question 10.
The phenomenon by which carbohydrates are oxidised to release ethyl alcohol is
(a) Glycolysis
(b) Kreb’s cycle
(c) Photosynthesis
(d) Fermentation
Answer:
(d) Fermentation

Question 12.
Where you will create category of blocks?
(a) Block palette
(b) Block menu
(c) Script area
(d) Sprite
Answer:
(b) Block menu

Question 13.
State Boyle’s law.
Answer:
When the temperature of a gas is kept constant, the volume of a fixed mass of gas is inversely proportional to its pressure. P ∝ \(\frac{1}{V}\)

Question 15.
Why are traffic signals red in colour?
Answer:

Question 19.
Write the differences between endocrine and exocrine gland.
Answer:

Question 21.
Define Cancer.
Answer:
Cancer is an abnormal and uncontrolled division of cells that invade and destroy surrounding tissue forming a tumor or neoplasm: It is a heterogenous group of cells that do not respond to the normal cell division. 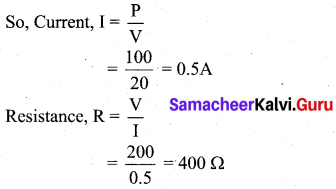 (b) What is the role of the earth wire in domestic circuits?
Answer:

Question 26.
Explain the mechanism of cleansing action of soap.
Answer:
A soap molecule contains two chemically distinct parts that interact differently with water. It has one polar end, which is a short head with a carboxylate group (-COONa) and one nonpolar end having the long tail made of the hydrocarbon chain.

When a soap or detergent is dissolved in water, the molecules join together as clusters called ‘micelles’. Their long hydrocarbon chains attach themselves to the oil and dirt. The dirt is thus surrounded by the non-polar end of the soap molecules. The charged carboxylate end of the soap molecules makes the micelles soluble in water. Thus, the dirt is washed away with the soap.

Question 27.
(a) Explain the various types of binary solutions based on the physical states of solute and solvent table.
Answer:

(b) State Henry’s law?
Answer:
Henry’s law states that, the solubility of a gas in a liquid, is directly proportional to the pressure of the gas over the solution at a definite temperature.

Question 30.
(a) Draw and label the structure of oxysomes
Answer: 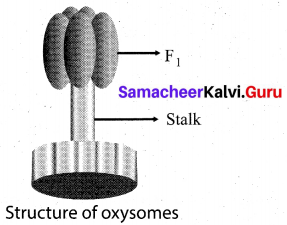 (b) What is respiratory quotient?
Answer:
The ratio of volume of carbon dioxide liberated and the volume of oxygen consumed, during respiration is called Respiratory Quotient (R.Q)

Question 32.
(a) State Newton’s third law of motion and explain with examples:
Answer:
Law: ‘For every action, there is an equal and opposite reaction.
They always act on two different bodies’.
FB = – FA

Examples:
(i) When birds fly:
Push the air downwards with their wings – Action
Air push the bird upwards – Reaction

(b) How will you identify saturated and unsaturated compounds?
Answer:

(ii) Explain the construction and working of a ‘compound microscope’.
Answer:
Construction
A compound microscope consists of two convex lenses. The lens with the shorter focal length is placed near the object, and is called as ‘objective lens’ or ‘objective piece’. The lens with larger focal length and larger aperture placed near the observer’s eye is called as ‘eye lens’ or ‘eye piece’. Both the lenses are fixed in a narrow tube with adjustable provision. 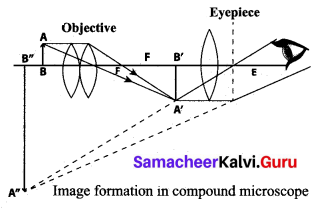 Working:
(i) The object (AB) is placed at a distance slightly greater than the focal length of objective lens (u >fo).
(ii) A real, inverted and magnified image (A’B’) is formed at the other side of the objective lens.
(iii) This image behaves as the object for the eye lens. The position of the eye lens is adjusted in such a way, that the image (A’B’) falls within the principal focus of the eye piece.
(iv) This eye piece forms a virtual, enlarged and erect image (A” B”) on the same side of the object.
(v) Compound microscope has 50 to 200 times more magnification power than simple microscope.

(b) (i) A heavy truck and bike are moving with the same kinetic energy. If the mass of the truck is four times that of the bike, then calculate the ratio of their momenta. (Ratio of momenta = 1:2)
Answer:
Given: Let mb , mt are the masses of truck and bike.
mt = 4mb ………(1) 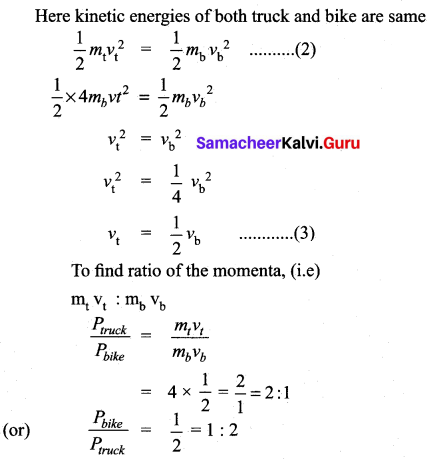 (ii) Define solubility.
Answer:
It is defined as the number of grams of a solute that can be dissolved in 100 g of a solvent to form its saturated solution at a given temperature and pressure.

Question 35.
(a) (i) Which hormone is known as stress hormone in plants ? Why?
Answer:
Abscisic acid (ABA) is a growth, inhibitor which regulates abscission and dormancy. It increases tolerance of plants to various kinds of stress. So, it is also called as stress hormone. It is found in the chloroplast of plants.

(ii) How does binary fission differ from multiple fission?
Answer:

Methods of solid wastes disposal:
(1) Segregation: It is the separation of different type of waste materials like biodegradable and non-biodegradable wastes.

(2) Sanitary landfill: Solid wastes are dumped into low lying areas. The layers are compacted by trucks to allow settlement. The waste materials get stabilised in about 2-12 months. The organic matter undergoes decomposition.

(3) Incineration: It is the burning of non-biodegradable solid wastes (medical wastes) in properly constructed furnace at high temperature.

(4) Composting: Biodegradable matter of solid wastes is digested by microbial action or earthworms and converted into humus.

(b) (i) Explain the male reproductive system of rabbit?
Answer: 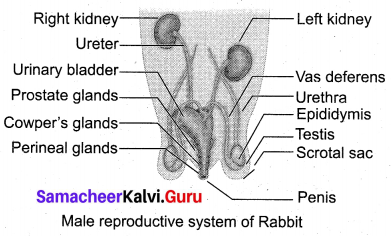 The male reproductive system of rabbit consists of a pair of testes which are ovoid in shape. Testes are enclosed by scrotal sacs in the abdominal cavity. Each testis consists of numerous fine tubules called seminiferous tubules.
This network of tubules lead into Cowper s glands a coiled tubule called epididymis, Perineal glands which lead into the sperm duct called vas deferens.

The vas deferens join in the urethra just below the urinary bladder. The urethra runs backward and passes into the penis. There are three accessory glands namely prostate gland, cowper’s gland and perineal gland. Their secretions are involved in reproduction.