Question 9.
The xylem and phloem arranged side by side on same radius is called _______.
(a) radial
(b) amphivasal
(c) conjoint
(d) None of these
Answer:
(c) conjoint

Question 13.
Why a spanner with a long handle is preferred to tighten screws in heavy vehicles?
Answer:
This is because turning effect to tighten the screws depends upon the perpendicular distance of the applied force from the axis of rotation in power arm. Larger the power arm less is the force required to turn the screws. So spanner is provided with a long handle.

Question 18.
How is diastema formed in rabbit?
Answer:
Diastema is a gap between the incisors and premolar. It is formed due to the absence of canine. It helps in mastication and chewing of food in herbivorous animals.

Question 19.
What is the role of parathormone?
Answer:
The parathormone regulate calcium and phosphorus metabolism in the body. They act on bone, kidney and intestine to maintain blood calcium levels. 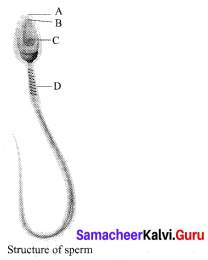 Question 23.
Write the applications of universal law of gravitation.
Answer:

(ii) Define dispersion of light.
Answer:
When a beam of white light or composite light is refracted through any transparent media such as glass or water, it is split into its component colours. This phenomenon is called as‘dispersion of light’.

Question 27.
Explain the types of double displacement reactions with examples.
Answer:
There are two major classes of double displacement reactions. They are,
(i) Precipitation Reactions:
When aqueous solutions of two compounds are mixed, if they react to form an insoluble compound and a soluble compound, then it is called precipitation reaction.
pb(NO3)2(aq) + 2KI(aq) → PbI2(s) ↓+ 2KNO3(aq)

(ii) Neutralisation Reactions:
Another type of displacement reaction in which the acid reacts with the base to form a salt and water. It is called ‘neutralisation reaction’ as both acid and base neutralize each other.
NaOH(aq) + HCl1(aq) → NaCl(aq) + H2O(l)

Question 28.
(i) Explain the structure of an atom bomb.
Answer:
Principle:

Question 29.
With a neat labelled diagram explain the structure of a neuron.
Answer:

A neuron or nerve cell is the structural and functional unit of the nervous system. It consists of Cyton, Dendrites and Axon.

(a) Cyton: Cyton has a central nucleus with the abundant – cytoplasm called neuroplasm. The cytoplasm has large granular body called Nissel’s granules and the other cell organelles like mitochondria, ribosomes, lysosomes, and endoplasmic reticulum.

(b) Dendrites: These are the numerous branched cytoplasmic processes, that project from the surface of the cell body. They conduct nerve impulses, towards the cyton.

(c) Axon: The axon is a single, elongated, slender projection. The end of axon terminates as fine branches, which terminate into knob like swellings called synaptic knob. The plasma membrane of axon is called axolemma, while the cytoplasm is called axoplasm. It carries impulses away from the cyton.

The axon may be covered by a protein sheath called myelin sheath, which is further covered by a layer of Schwann cells called Neurilemma. Myelin sheath breaks at intervals, by depressions called Nodes of Ranvier. The region between the nodes is called as internode.

Question 30.
(i) What are the various routes by which transmission of human immuno deficiency virus takes place?
Answer:
AIDS is not transmitted by touch or any physical contact. HIV is generally transmitted by

Question 31.
(i) Kavitha gave birth to a female baby. Her family members say that she can give birth to only female babies because of her family history. Is the statement given by her family members true. Justify your answer.
Answer:
No, the statement is not true. Sex determination is a chance of probability as to which category of sperm fuses with egg.
If the egg [X] is fused by the X-bearing sperm, an XX individual (female) is produced. 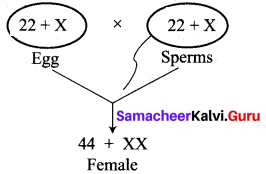 If the egg [X] is fused by the Y-bearing sperm an XY individual (male) is produced. 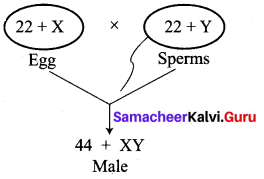 (ii) Who discovered Rh factor? Why was it named so?
Answer:
The Rh factor was discovered by Landsteiner and Wiener in 1940 in Rhesus monkey. Hence the name Rh factor.

(ii) Kreb’s cycle: This occurs in mitochondria matrix. During this cycle, oxidation of pyruvic acid result into CO2 and water.

(iii) Electron transport chain(ETC):
ETC is located on the inner membrane of the mitochondria.

(a) NADH2 and FADH2 molecules formed during Glycolysis and Kreb’s cycle are oxidised to NAD+ and FAD+ to release the energy via electrons.

(b) The electrons, as they move through the system, release energy which is trapped by ADP to synthesize ATP. This is called Oxidative Phosphorylation. During this process, oxygen which is the acceptor of electrons get reduced to water.

Question 33.
(a) (i) State Newton’s third law of motion.
Answer:
‘For every action, there is an equal and opposite reaction. They always act on two different bodies’.

(ii) Deduce the equation of a force using Newton’s second law of motion.
Answer:
“The force acting on a body is directly proportional to the rate of change of linear momentum of the body and the change in momentum takes place in the direction of the force”.
Let, ‘m’ be the mass of a moving body, moving along a straight line with an initial speed ‘u’. After a time interval of ‘t’ the velocity of the body changes to ‘v’ due to the impact of an unbalanced external force F.

(iii) Calculate the number of molecules present in 50 g of Fe.
Answer:

(b) Explain smelting process..
Answer:
Smelting: The charge consisting of roasted ore, coke and limestone in the ratio 8 : 4 : 1 is smelted in a blast furnace by introducing it through the cup and cone arrangement at the top.
There are three important regions in the furnace. 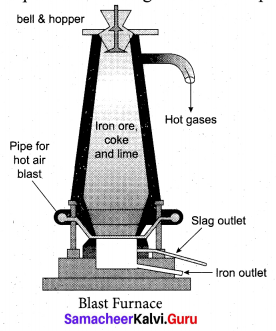 (a) The Lower Region (Combustion Zone): The temperature is at 1500°C. In this region, coke bums
with oxygen to form CO2 when the charge comes in contact with a hot blast of air.

It is an exothermic reaction since heat is liberated.

(b) The middle region (Fusion Zone): The temparature prevails at 1000° C. In this region, CO2 is reduced to CO.

These two reactions are endothermic due to absorption of heat. Calcium oxide combines with silica to form calcium silicate slag.
CaO + SiO2 → CaSiO3

The molten iron is collected at the bottom of the furnace after removing the slag.
The iron thus formed is called pig iron. It is remelted and cast into different moulds. This iron is called cast iron.

(ii) What is Autogamy?
Answer:
Autogamy or self pollination is the transfer of pollen grains from the anther to the stigma of same flower or another flower borne on the same plant. Eg. Hibiscus.