Question 7.
A patient with blood group ‘O’ was injured in an accident and has blood loss. Which blood group the doctor should effectively use _______ for transfusion.
(a) O group
(b) AB group
(c) A or B group
(d) All blood group
Answer:
(a) O group

Question 13.
State Newton’s second law.
Answer:
“The force acting on a body is directly proportional to the rate of change of linear momentum of the body and the change in momentum takes place in the direction of the force”.

Question 14.
What are the caused of “Myopia”?
Answer:
Myopia, also known as short sightedness, occurs due to the lengthening of eye ball. With this defect, nearby objects can be seen clearly but distance objects cannot be seen clearly.

Question 15.
What is the minimum distance needed for an echo?
Answer:

Question 16.
Why does the reaction rate of a reaction increase on raising the temperature?
Answer:
On increasing temperature heat is supplied to the reactant. This energy breaks more bonds and thus speed up the chemical reaction. Foods kept at room temperature spoils faster than that kept in the refrigerator.

Question 19.
What is bolting? How can it be induced artificially?
Answer:
Sudden shoot elongation followed by flowering is known as bolting. Artifically bolting can be induced on rosette plants by the treatment of Gibberellins.

Question 21.
How can you determine the age of the fossils?
Answer:
The age of fossils is determined by radioactive elements present in it. They may be carbon, uranium, lead or potassium. By radio active carbon (C14) dating method, carbon consumption of animals and plants stops after death and since then, only the decaying process of C14 occurs continuously. The time passed since death of a plant or animal can be calculated by measuring the amount of C14 present in their body.

(ii) Define one calorie.
Answer:
One calorie is defined as the amount of heat energy required to rise the temperature of 1 gram of water through 1°C. 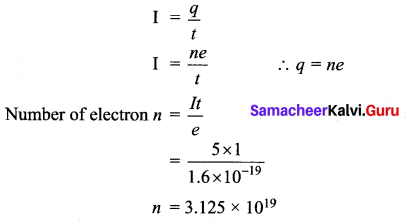 (ii) Mention two cases in which there is no Doppler effect in sound?
Answer:

Question 26.
Derive the relationship between Relative molecular mass and Vapour density.
Answer:
(а) The Relative Molecular Mass of a gas or vapour is the ratio between the mass of one molecule of the gas or vapour to mass of one atom of Hydrogen.

(b) Vapour density is the ratio of the mass of a certain volume of a gas or vapour, to the mass of an equal volume of hydrogen, measured under the same conditions of temperature and pressure.

(f) By comparing the definition of relative molecular mass Mid vapour density we can write as follows.

Question 27.
How is metal corrosion prevented?
Answer:
Methods of preventing corrosion:
1. Alloying: The metals can be alloyed to prevent the process of corrosion.
E.g: Stainless Steel

2. Surface Coating: It involves application of a protective coating over the metal. It is of the
following types:
(a) Galvanization: It is the process of coating zinc on iron sheets by using electric current.
(b) Electroplating: It is a method of coating one metal over another metal by passing electric current.
(c) Anodizing: It is an electrochemical process that converts the metal surface into a decorative, durable and corrosion resistant. Aluminium is widely used for anodizing process.
(d) Cathodic Protection: It is the method of controlling corrosion of a metal surface protected is coated with the metal which is easily corrodible. The easily corrodible metal is called Sacrificial metal to act as anode ensuring cathodic protection.

Question 28.
With a neat labelled diagram explain the structure of a neuron.
Answer: 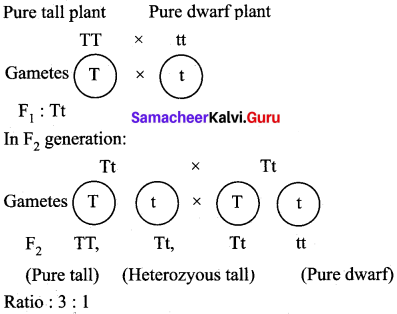 (c) Dwarf plants were missing on F1 but reappeared in F2 generation.

(ii) Why is the sino-atrial node Called the pacemaker of heart?
Answer:
Sino-atrial node acts as the ‘pacemaker’ of the heart because it is capable of initiating impulse which can stimulate the heart muscles to contract.

(b) Aerobic and Anaerobic respiration
Answer:

(ii) Protina, shakt and Rathna are lysine rich maize hybrids, which are developed in India.

Question 33.
(i) State Boyle’s law.
Answer:
When the temperature of a gas is kept constant, the volume of a fixed mass of gas is inversely proportional to its pressure.
P ∝ 1/V

(ii) Explain the experiment of measuring the real and apparent expansion of a liquid with a neat diagram.
Answer:
(1) To start with, the liquid whose real and apparent expansion is to be determined is poured in a container up to a level. Mark this level as L1.
(2) Now, heat the container and the liquid using a burner as shown in the figure Initially, the container receives the thermal energy and it expands.
(3) As a result, the volume of the liquid appears to have reduced. Mark this reduced level of liquid as L2. 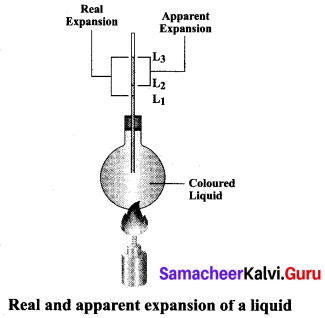 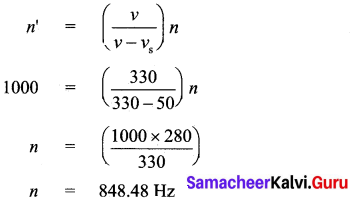 The actual frequency of the sound is 848.48 Hz. When the source is moving away from the stationary listener, the expression for apparent frequency is

The phrase that scientists often use when predicting solubility is “like dissolves like.” This expression means that dissolving occurs when similarities exist between the solvent and the solute. For example: Common salt is a polar compound and dissolves readily in polar solvent like water.

Aquatic animals live more in cold regions because, more amount of dissolved oxygen is present in the water of cold regions. This shows that the solubility of oxygen in water is more at low temperatures.

Question 35.
(a) (i) Why are thyroid hormones referred as personality hormone?
(ii) Define triple fusion?
(iii) Enumerate the importance of forests?
Answer:
(i) Thyroid hormones is essential for normal physical, mental and personality development. Hence it is called as personality honnone.
(ii) The fusion involving two polar nucleus and a sperm nucleus, that occurs in double fertilization in a seed plant and results in the formation of endosperm, is called the triple fusion.
(iii) Importance of forests.

1. Overproduction: Living beings have the ability to reproduce and have the capacity to multiply in a geometrical manner.

2. Struggle for existence: Due to overproduction a geometric ratio of increase in population occurs. The space to live and food available for the organisms remain the same. This creates a competition among the organisms, for food and space, leading to struggle.

5. Origin of species:
According to Darwin, new species originates by the gradual accumulation of favourable variations for a number of generations.