Question 2.
If the diameter of the pulley is 6 inches, length of pointer is 10 inches and distance travelled by pointer is 5 inches. Calculate the actual growth in length of plant:
(a) 3 inches
(b) 6 inches
(c) 12 inches
(d) 30 inches
Answer:
(a) 3 inches

Question 3.
In unisexual plants, sex can be changed by the application of:
(a) ethanol
(b) cytokinins
(c) ABA
(d) auxin
Answer:
(c) ABA

Question 4.
Select the correctly matched one: 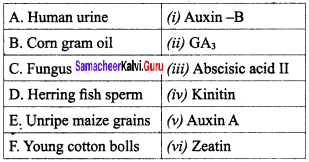 Question 6.
What are the parameters used to measure growth of plants?
Answer:

Question 7.
What is plasticity?
Answer:
Plants follow different pathways in response to the environment or phases of life to form different kinds of structures. This ability is called plasticity,
eg : Heterophylly in cotton and coriander. In such plants, the leaves of the juvenile plant are different in shape from those in mature plants. 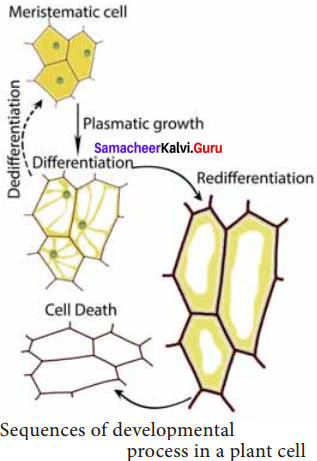 On the other hand, the difference in shapes of leaves produced in air and those produced in water in buttercup also represent the heterophyllous development due to the environment. This phenomenon of heterophylly is an example of plasticity.

Breaks dormancy:
It can break the dormancy of certain, light-sensitive seeds and induces germination. Eg. Tobacco

Lateral growth:
It promotes the growth of lateral buds even in the presence of Apical bud.

Delays Aging:
It’s an application, delays – aging by nutrient mobilization – It is known as Rich mond Lang effect Various other activities, such as

Question 9.
Describe the mechanism of photoperiodic induction of flowering.
Answer: 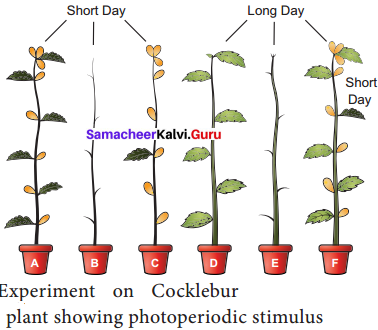 The photoperiodic stimulus is perceived by the leaves. The floral hormone is synthesised in leaves and translocated to the apical tip to promote flowering. This can be explained by a simple experiment on Cocklebur (Xanthium pensylvanicum), a short-day plant. Usually, Xanthium will flower under short-day conditions. If the plant is defoliated and kept under short-day conditions it will not flower.

Getting old or aging is called senescence.

I. Choose the correct answer (1 Mark)

Question 7.
The chemical substance with the molecular structure of carotenoid ………….. is
a) Gibberellins
b) Ethylene
c) ABA
d) Cytokinin,
Answer:
c) ABA

Question 9.
In decapitated plants, axillary buds are activated because,
a) Absence of auxin
b) More food material as available to them
c) Amount of Cytokinin increases in them
d) They get more light
Answer:
a) Absence of Auxin

Question 20.
The term gibberellin was named by:
(a) Brain
(b) Yabuta
(c) Sumiki
(d) kurosawa
Answer:
(b) Yabuta

Question 23.
Which of the following types of Phytohormones resemble nucleic acid in some structural aspects?
a) Cytokinins
b) Auxins
c) Gibbervellins
d) Abscisic acid
Answer:
a) Cytokinins

Question 25.
Which of the hormone is known as stress hormone?
a) Gibberellin
b) Kinetin
c) ABA
d) Auxin
Answer:
c) ABA

Question 29.
To increase sugar production in sugarcane, they are sprayed with
a) IAA
b) Cytokinin
c) Gibberellins
d) Ethylene
Answer:
c) Gibberellins

Question 35.
The role of Ethylene in the ripening of lemon is studied by
a) R. Gane
b) Cocken
c) Denny
d) Went
Answer:
c) Denny

Question 1.
Growth is remarkable measurable and significant in some plants Give Examples.
Answer:

Question 3.
What is the specialty of Saguaro Cactus?
Answer:

Question 6.
Define the term etiolation
Answer:
Light has its own contribution to the growth of the plant. Light is important for growth and photosynthesis. Light stimulates healthy growth. Absence of light may lead to yellowish in colour. This is called etiolation.

Question 7.
What is meant by Etiolation?
Answer:

Question 10.
Explain the synergistic effect of phytochromes.
Answer:
The effect of one or more substances in such a way that both promote each other’s activity, eg: Activity of auxin and gibberellins or cytokinins.

Question 11.
What is Apical dominance?
Answer:
Suppression of growth in the lateral bud by apical bud due to Auxin produced by apical bud is termed as Apical
dominance.

Question 14.
What is Balance or Foolish Seedling disease of paddy?
Answer:

Question 17.
Why do we call, ABA a stress hormone?
Answer:

Question 19.
What is meant by Day-neutral plants?
Answer:
There are no. of plants that can flower in all possible photoperiods. They are also called photo neutral or Intermediate or Day-neutral plants Eg. Tomato, Cotton.

Question 21.
What is Florigen?
Answer:

Question 22.
Explain the term seed dormancy.
Answer:
The condition of a seed when it fails to germinate even in suitable environmental condition is called seed dormancy.

Question 24.
Explain the term programmed cell death.
Answer:
Senescence is controlled by plants own genetic programme and death of the plant or plant part consequent to senescence is called Programmed Cell Death. In short senescence of an individual cell is called PCD.

Question 25.
Define the term “Abscission”.
Answer:
Abscission is a physiological process of shedding of organs like leaves, flowers, fruits and seeds from the parent plant body.

Question 1.
Explain the different phases of growth in plants.
Answer:
There are three phases of growth.
1. Formative phase:
Growth in this phase occurs in. meristematic cells of the shoot and root tips. These cells are small in size, have dense protoplasm, large nucleus and small vacuoles. Cells divide continuously by mitotic cell division. Some cells retain the capability of cell division while other cells enter the next phase of growth.

2. Elongation Phase:
Newly formed daughter cells are pushed out of the meristematic zone and increase the volume. It requires auxin and food supply, deposition of new cell wall materials (intussusception), the addition of protoplasm, and development of central vacuole take place.

3. Maturation Phase:
During this stage, cells attain mature form and size. Thickening and differentiation take place. After differentiation, the cells do not grow further. 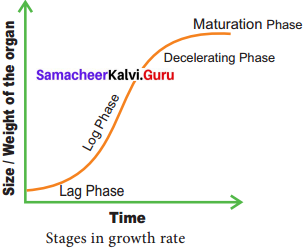 Question 4.
What are the characteristic features of phytohormones?
Answer:

Question 5.
Write about the history of the discovery of Cytokinin.
Answer:

Question 7.
What is the Agricultural role of Ethylene?
Answer:

Question 8.
What is meant by climacteric fruits?
Answer:
In most plants, there is a sharp rise in respiration rate near the end of the development of fruit, called climacteric rise. Such fruits are called climacteric fruits. The ripening on demand can be induced in these fruits by exposing them to normal air containing about 1 ppm of ethylene. A liquid called ethephon is being used in fruit ripening as it continuously releases ethylene, eg: Tomato, Apples, Banana, Mango.

Question 9.
Give the classification of plants based on photoperiodism.
Answer: 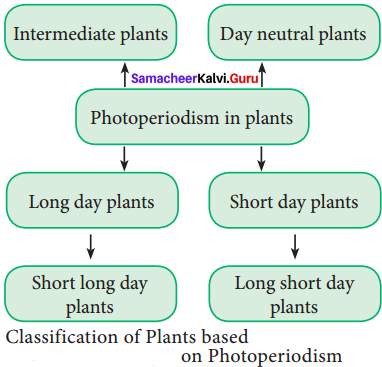 Question 11.
What are the practical applications of vernalization in plants?
Answer:

Question 12.
Write down the internal factors, that affect seed germination.
Answer:
1. Maturity of embryo:
The seeds of some plants, when shed will contain immature embryo. Such seeds germinate only after maturation of embryo.

2. Viability:
Usually seeds remain viable or living only for a particular period. Viability of seeds range from a few days (eg: Oxalis) to more than hundred years. Maximum viability (1000 years) has been recorded in lotus seeds. Seeds germinate only within the period of viability.

3. Dormancy:
Seeds of many plants are dormant at the time of shedding.

Question 13.
What is the physiology of senescence?
Answer:

Question 14.
What are the significances of abscission?
Answer:

Question 1.
Describe the geometric growth rate in plants with suitable diagram.
Answer:
Geometric growth rate:
This growth occurs in many higher plants and plant organs and is measured in size or weight. In plant growth, geometric cell division results if all cells of an organism or tissue are active mitotically. eg: Round three in the given figure, produces 8 cells as 23 – 8 and after round 20 there are 220 = 1,048,576 cells. The large plant or animal parts are produced this way. In fact, it is common in animals but rare in plants except when they are young and small. Exponential growth curve can be expressed as, 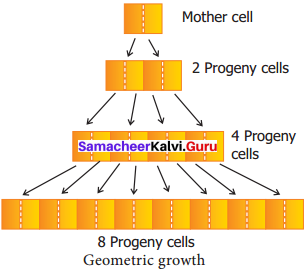 Here V is the relative growth rate and also a measure of the ability of the plant to produce new plant material, referred to as efficiency index. Hence, the final size of W1 depends on the initial size W0. 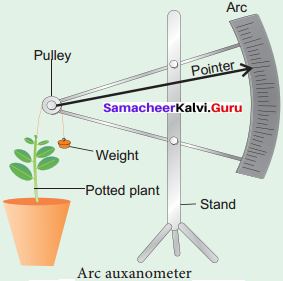 Question 3.
Write an essay on the phytochrome, Gibberelf ns in plants.
Answer:
1. Discovery:
The effect of gibberellins had been known in Japan since early 1800 where certain rice plants were found to suffer from ‘Bakanae’ or foolish seedling disease. This disease was found by Kurosawa (1926) to be caused by a fungus Gibberella fujikuroi. The active substance was separated from fungus and named gibberellin by Yabuta (1935). These are more than 100 gibberellins reported from both fungi and higher plants. They are noted as GA1, GA2, GA3, and so on. GA3 is the first discovered gibberellin. In 1938, Yabuta and Sumiki isolated gibberellin in crystalline form. In 1955, Brain et al gave the name gibberellic acid. In 1961, Cross et al., established its structure.

2. Occurrence:
The major site of gibberellin production in plants is parts like embryo, roots and young leaves near the tip. Immature seeds are rich in gibberellins.

3. Precursors:
The gibberellins are chemically related to terpenoids (natural rubber, carotenoids and steroids) formed by 5 – C precursor, an Isoprenoid unit called Iso Pentenyl Pyrophosphate (IPP) through a number of intermediates. The primary precursor is acetate.

5. Transport in plants:
The transport of gibberellins in plants is non-polar. Gibberellins are translocated through phloem and also occur in xylem due to lateral movement between vascular bundles.

6. Bioassay (Dwarf Pea. assay):
Seeds of dwarf pea are allowed to germinate till the formation of the coleoptile. GA solution is applied to some seedlings. Others are kept under control. Epicotyle length is measured and as such, GA stimulating epicotyl growth can be seen.

Question 5.
Write down the Agricultural role of gibberellins.
Answer:

1. Hypothesis of phasic development:
According to Lysenko, the development of an annual seed plant consists of two phases. The first phase is a thermostat, which is a vegetative phase requiring low temperature and suitable moisture. The next phase is photo stage which requires high temperature for the synthesis of florigen (flowering hormone). 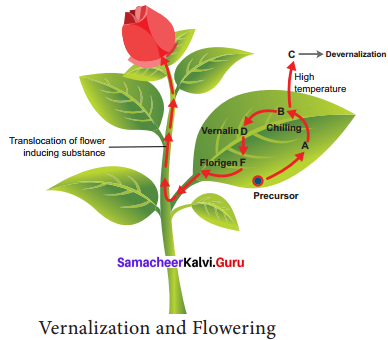 (a) Overall senescence:
This kind of senescence occurs in annual plants when the entire plant gets affected and dies, eg: Wheat and Soybean. It also occurs in few perennials also, eg: Agave and Bamboo.

(b) Top senescence:
It occurs in aerial parts of plants. It is common in perennials, underground and root system remains viable, eg: Banana and Gladiolus.

(c) Deciduous senescence:
It is common in deciduous plants and occurs only in the leaves of plants, the bulk of the stem and root system remains alive, eg: Elm and Maple.

(d) Progressive senescence:
This kind of senescence is gradual. First it occurs in old leaves followed by new leaves f then stem and finally root system. It is common in annuals.

Question 8.
Give the physiological effects of ABA Closure of stomata
Answer:

Question 1.
Demonstration of phases of growth.
Answer:
To demonstrate and study the phases of growth, germinate a few seeds of bean on a circular filter paper soaked with water in a Petri dish. After two days of growth, select a few seedlings with a straight radical of 2 to 3 cm in length. Dry the surface of the radical with blotting paper and mark the radical from tip to base with at least 2 mm gap using waterproof ink. Replace the seedlings in filter paper and observe further growth.

Question 2.
Measurement of growth by direct method.
Answer:
Step 1: Take ordinary scale.
Step 2: Measure ground stem up to the growing point of the plant.
Step 3: Use Indian ink and mark at regular intervals to measure the length of root, stem, and girth of the trunk.

Hope all the information given regarding Class 11th Tamilnadu State Board Bio Botany Solutions will help you to get good knowledge. For any queries, you can contact us and clear your doubts. Connect with us using the comment section. Also, we love your feedback and review. Get your Chapter Wise Samacheer Kalvi Class 11th Textbook Solutions for Bio Botany Solutions Chapter 15 Plant Growth and Development Questions and Answers PDF start learning for the exam.