Great Thinkers And New Faiths Questions 1.
What is the name of the Buddhist scripture?
(a) Angas
(b) Tripitakas
(c) Tirukkural
(d) Naladiyar
Answer:
(b) Tripitakas

Great Thinkers And New Faiths Book Back Answers Questions 2.
Who was the first Tirthankara of Jainism?
(a) Rishabha
(b) Parsava
(c) Vardhamana
(d) Buddha
Answer:
(a) Rishabha

II. Match the statement with the Reason, Tick the appropriate answer:

6th Std Social Science Guide Questions 4.
Consider the following statements regarding the causes of the origin of Jainism and Buddhism.

Question 2.
What are the two sects of Buddhism?
Answer:

Question 3.
What does Jina mean?
Answer:
Jina means conquering self and the external world.

Question 2.
What are the five important rules of conduct in Jainism?
Answer:

Question 5.
Jainism and Buddhism flourished in Sangam period. Give any two evidences for each.
Answer:

(i) In ancient Tamil literature, Jainism is referred to as Samanam. There is a Samanar Hill or Samanar Malai in Keelakuyilkudi village, 15 km away from Madurai. The images of Tirthankaras created by Jain monks are found in the hill. It is a protected monument of Archaeological Survey of India.

(ii) There is a reference to Aravor Palli, place of living for Jain monks, in Manimegalai.

(iii) Buddhism spread to Tamil Nadu much later than Jainism. Manimekalai, one of the epics of the post-Sangam age is a Buddhist literature.

Question 1.
Karma – a person’s action. Name any 10 good actions (deeds).
Answer:
Karma means the sum of a person’s actions in this and previous state of existence, viewed as deciding their fate in future existence.
Some of the good deeds or actions are given below to be followed in our day to day life.

Question 1.
Read any one story from Jatakas and write a similar story on your own.
THE OX WHO ENVIED THE GOAT
Once upon a time there was an Ox named Big White. He had a younger brother named Little White. These two brothers did all the carting on a large farm.

The farmer had one daughter and she was soon to be married.

The farmer’s wife gave orders that the Goat, in the farm, should be fattened for the wedding feast.

Little White noticed that the Goat was fed on choice food.

He said to his brother, “How is it, Big White, that I and you are given only straw and grass to eat, while we do all the hard work on the farm? That lazy Goat does nothing S but eat the choice food the farmer gives him.”

Said his brother, “My dear Little White, don’t envy him. That little Goat is eating the? food of death! He is being fattened for the wedding feast. Eat your straw and grass and; be content and live long.”

Not long afterwards the fattened Goat was killed and cooked for the wedding feast. Then Big White said, “Did you see what happened to the Goat after all his fine feeding?’ “Yes,” said the little brother, “we can go on eating plain food for years, but the poor little j Goat ate the food of death and now he is dead. His feed was so good while it lasted, but I the Goat did not last long.”

Moral: Be content with what you have and don’t envy others.

Question 2.
Make a tabular column in the following headings. 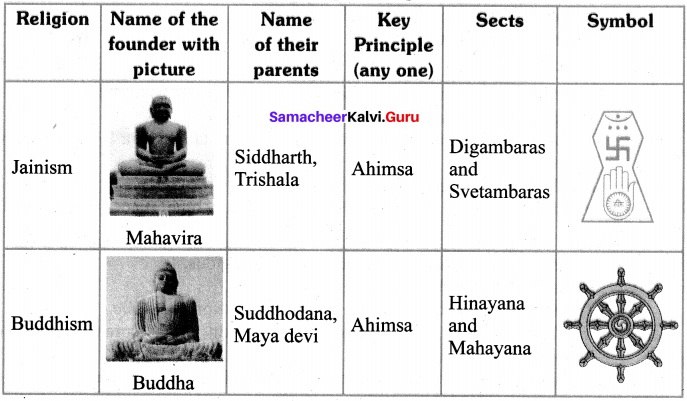 Question 5.
Make A Venn diagram to indicate similarities and dissimilarities of Jainism and Buddhism.
Answer: 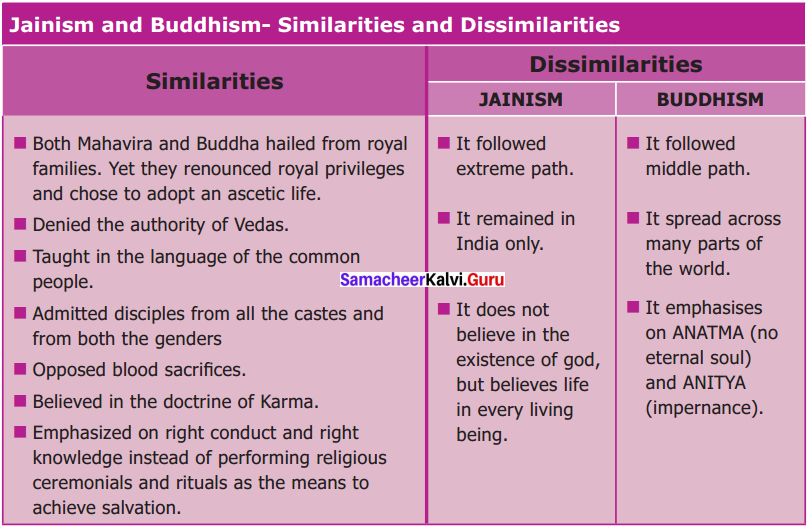 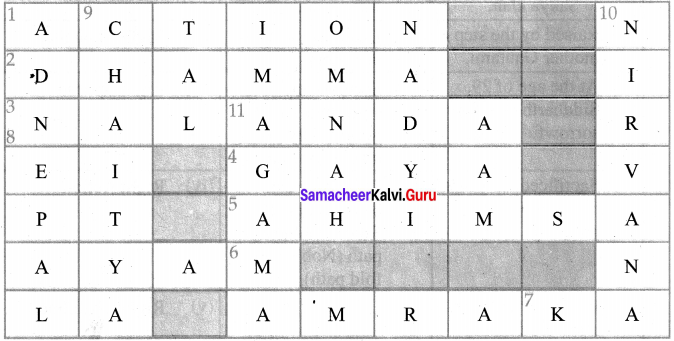 1. One of the Tri Rathna: Right
2. Buddha’s teachings are referred as
3. A great centre of education
4. The place where Buddha attained enlightment
5. Not to injure any living being

Right to left
6. Mother of Siddhartha
7. The Quality of man’s life depends on his deed
Answer:
6. MAYA
7. KARMA

X. Life Skills
Question 1.
Create a story board for jaiitism/Buddhistii in a chart.

A Story Board Model I
(a) Buddhism 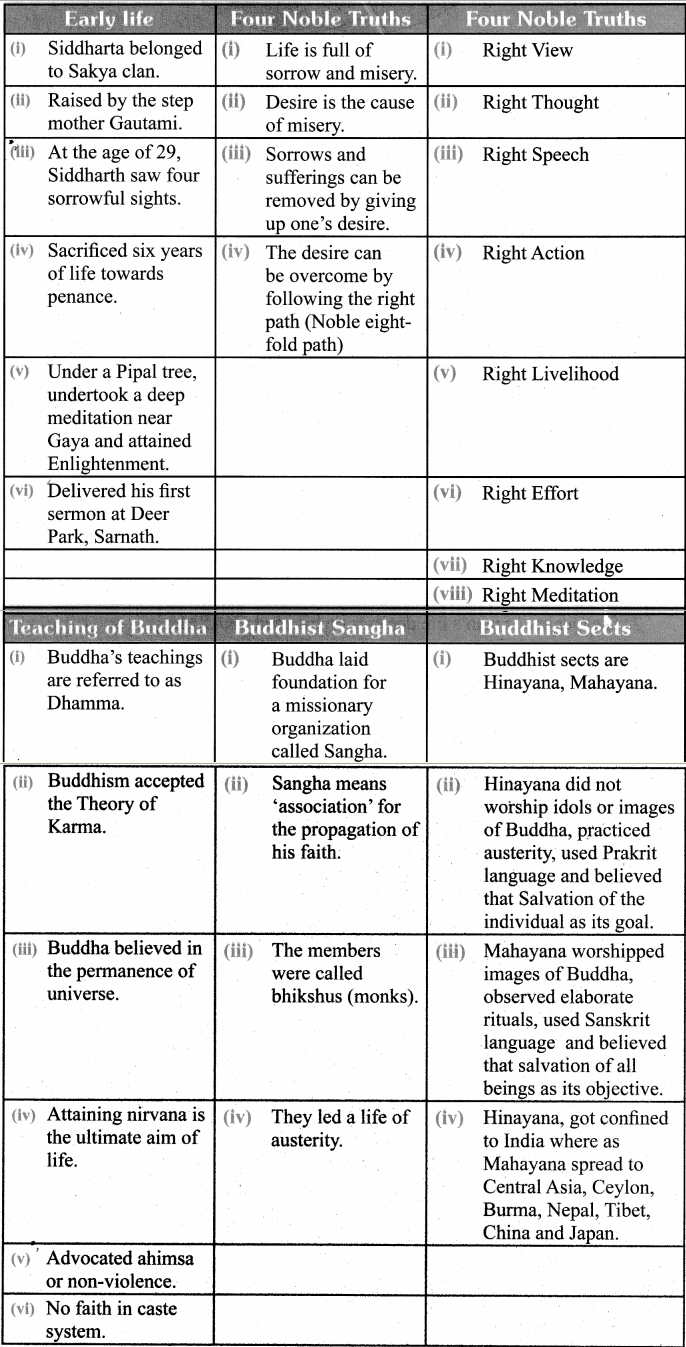 A Story Board – Model II
(b) Jainism 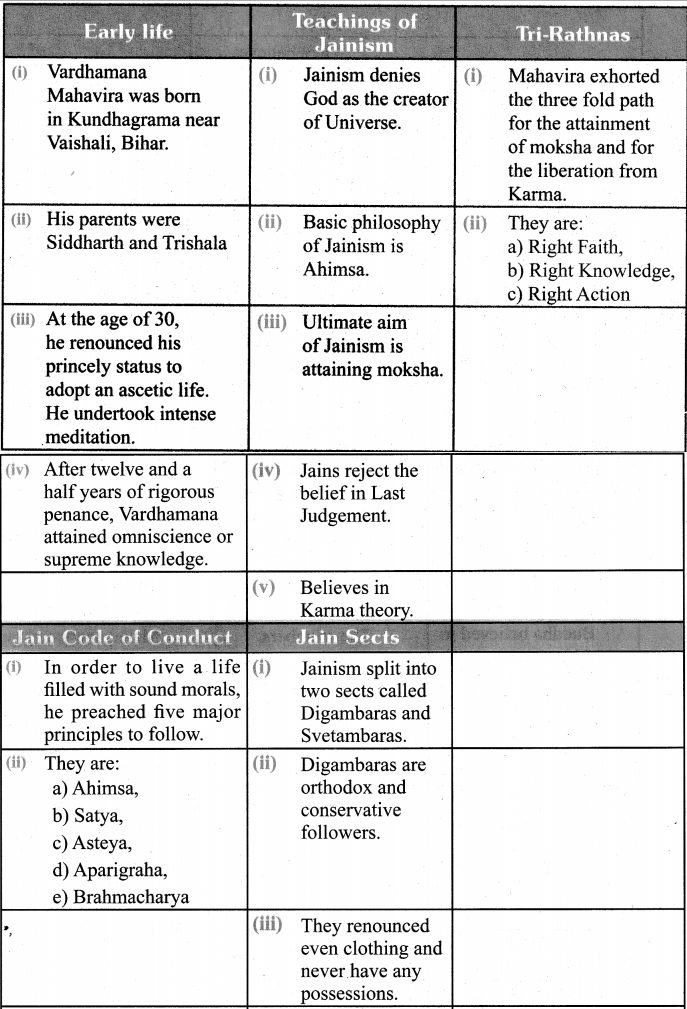 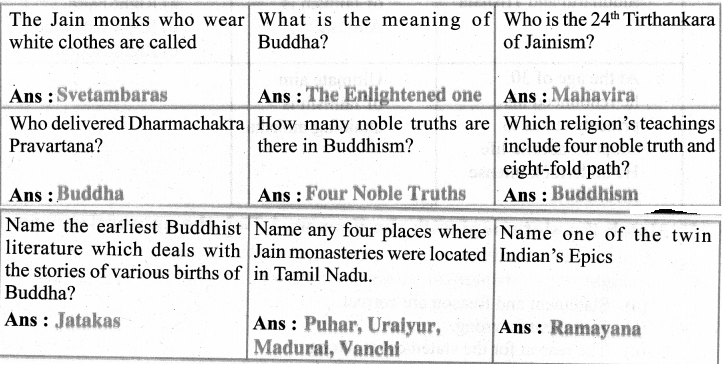 Question 5.
Samanam refers to
(a) Hindusim
(b) Buddhism
(c) Jainism
(d) None of the above
Answer:
(c) Jainism

Question 7.
Buddha was opposed to
(a) rituals
(b) sacrifices
(c) caste system
(d) All of the above
Answer:
(d) AH of the above

Question 9.
Mahayana sect used to spread the principles of Buddhism
(a) Sanskrit
(b) Tamil
(c) Prakrit
(d) All of the above
Answer:
(a) Sanskrit

Consider the following statements regarding the causes for the spread of Buddhism.

VI. Answer In one or two sentences :

Question 4.
Name the Royal patronage who helped the spread of Buddhism.
Answer:

Question 5.
Why was Buddha known as Sakya Muni?
Answer:

Question 6.
What are Fresco Paintings?
Answer:

Question 1.
Mention the causes for the spread of Buddhism.
Answer:

Question 2.
Explain the similarities of Buddhism and Jainism,
Answer:

Question 3.
Write about the influence of Buddhism in Tamil Nadu.

Question 4.
Write a note on
a) Confucianism
b) Zoroastrianism