I. Choose the appropriate answer :

IV. True or False. If False, give the correct statement (T/F).

atomic structure class 7 Question 1.
Assertion : An atom is electrically neutral.
Reason : Atoms have equal number of protons and electrons.
Answer:
Both Assertion and Reason are true and Reason is the correct explanation of Assertion.

chapter 4 atomic structure answer key Question 2.
Assertion : The mass of an atom is the mass of nucleus.
Reason : The nucleus is at the centre.
Answer:
Both Assertion and Reason are true and Reason is the correct explanation of Assertion.

class 7 science chapter 4 notes Question 1.
Define an atom.
Answer:
An atom is the smallest particle of a chemical element that retains its chemical properties.

samacheer kalvi.guru 7th science Question 3.
What is atomic number?
Answer:
The number of electrons or protons in an atom is called the atomic number of that atom. It is represented by the letter Z.

samacheer kalvi guru 7th science guide Question 4.
What is the characteristics of proton?
Answer:
The proton is the positively charged particle and its located in the nucleus. Its positive Charge is of the same magnitude as that of the electron’s negative charge.

atomic structure questions and answers pdf Question 1.
Draw the atom structure and explain the position of the sub-atomic particles. »
Answer:
Structure of an atom.

Question 3.
What are nucleons? Why are they so called? Write the properties of the nucleons?
Answer:

Properties of Nucleons :
(a) Nucleons (Proton and Neutrons) have same mass as if they were identical particles that differ only in their electric charge.
(b) The proton carries a charge +1 and the Neutron is neutral.
(c) The size nucleon is about 1 : 6 fm (Femto meters)
(d) The force that holds the nucleus together is very short range.

Oxygen : 0
Atomic number: 8
Valency : 2
Water (H2O) is the Oxide of Hydrogen and most familiar oxygen compound

Question 1.
An atom of an element has no electron, will that atom have any mass or not? Can atom exist without electron? If so then give example.
Answer:

Question 1.
Why are atomic numbers and mass numbers are always whole numbers ?
Answer:

Let us learn the characteristics of the subatomic particles through the following activity. Label the parts in the given diagram and answer the following.

Observe the table given above and answer the following questions.

Question 3.
Whose theory does not propose anything about the positive and negative charges of an atoms.
(a) J J. Thomson
(b) Dalton
(c) Rutherford
(d) Bohr
Answer:
(b) Dalton

Question 1.
A neutron is a neutral particle.
Answer:
True.

Question 2.
J.J. Thomson proposed than an atom consists of positively charged sphere in which the electrons are embedded.
Answer:
True.

Question 4.
Most of the space in an atom is occupied by electrons.
Answer:
True.

Question 1.
What is atomic number?
Answer:
Atomic number is the number of protons, an atom contains.

Question 2.
What is mass number of an atom?
Answer:
It is the sum of protons and neutrons in the nucleus of an atom.

Question 3.
What is a neutron?
Answer:
Neutron is an elementary particle that carries no charge

Question 6.
What are nucleons?
Answer:
Protons and neutrons reside in the nucleus of an atom and are thus called nucleons.

Question 7.
What is an electron?
Answer:
It is negatively charged particle, which revolve around the nucleus of the atom is specific orbits. 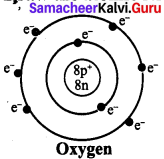 Question 4.
Define isotopes. Give example.
Answer:
Atoms of the same element can have different number of neutrons. Such atoms will have same atomic number but different mass numbers. These atoms are called isotopes. For example Hydrogen has three isotopes – Hydrogen,Deuterium,Tritium

Question 6.
What are the limitations of Thomson’s model of an atom?
Answer:
J. J. Thomson’s theory does not propose anything about the positive and negative charges of an atom. Hence , it was not able to explain many of the properties of substances.

VII. Answer the following in detail :

Question 1.
What was the model of an atom proposed by Thomson?
Answer:

Question 1.
In Rutherford experiment of scattering of alpha particles, can we take foil of any other metal instead of gold?
Answer:

Question 2.
How Rutherford’s model is different from that proposed by J.J. Thomson?
Answer:
According to Rutherford, most of the mass is concentrated is a small central part of the atom whereas J.J. Thomson thought that mass was uniformly distributed in the atom.