III. A) Match the following

B) Match the following

IV. Consider the following statement and (✓) Tick the appropriate answer.

V. Circle the odd one

Social Samacheer Kalvi 7th Question 1.
What are the classification of Races?
Answer:
The major world Human races are

Class 7 Social Science Geography Chapter 3 Question 2.
What is language?
Answer:
Language is a great force of socialization. Language, either in the written or oral form, is the most common type of communication.

Question 3.
Describe the classification of religion.
Answer:
Religion is classified as follows

Question 4.
Define settlement.
Answer:
Settlement is a place where people live and interact through activities such as agriculture, trading and entertainment.

Question 6.
Write a note on smart city.
Answer:
In an urban region, a city which is very much advanced in terms of infrastructure, real estate, communication and market availability is called a Smart City. E.g. Bhubaneshwar, Pune, Jaipur, Surat.

Question 2.
Mumbai is a mega city.
Answer:
A mega city is a very large city typically with a population of more than 10 million people. Mumbai has these specifications and so it is a mega city.

IX. Answer the following in a paragraph

Question 1.
Write about the four major classification of races.
Answer:

Question 2.
Write about the main features of religious life.
Answer:
Religion means a particular system of faith and worship, which brings human being with human society. Religion, is a symbol of group identity and a cultural rallying point.
it is classified as follows:

Question 3.
What are the factors influencing rural settlement?
Answer:

Question 4.
What are types of rural settlement? Explain any three.
Answer:
A rural settlement pattern is a function of relief, climate, water supply and socio-economic factor. It is broadly classified under the following patterns, such as Linear, Rectangular, Circular, Star like pattern etc.,

Question 2.
promotes the transmission of ideas and the functioning of political, social
and religious systems.
(a) Language
(b) Caste
(c) Nationality
(d) Race
Answer:
(a) Language

Question 4.
settlements are found in the Thar desert of Rajasthan.
(a) Compact
(b) Dispersed
(c) Rural
(d) Wet point
Answer:
(b) Dispersed

II. Consider the following statements and choose the right option given below.

III. A) Match the following

B) Match the following

Question 1.
What is migration?
Answer:
The study of movements and mobility of population is called migration. 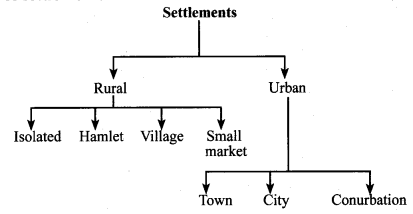 Question 5.
What are Megalopolis? Give examples.
Answer:
The word megalopolis is given for a large conurbation, when two or more large cities whose total population exceeds ten million. Eg., Washington D.C, Kolkata

Question 6.
What is a satellite town? Give examples.
Answer:
A satellite town is a town designed to house the over population of a major city, but is located well beyond the limits of that city. Eg., Patna, Barauni, Varanasi and Hajipur

V. Answer in a Detail

Question 1.
Write a paragraph about the form and type of house in early periods of settlement
Answer:
Old House Types