You can Download Samacheer Kalvi 7th Social Science Book Solutions Guide Pdf, Tamilnadu State Board help you to revise the complete Syllabus and score more marks in your examinations.

Vijayanagar And Bahmani Kingdom Question And Answer Question 1.
Who was the greatest ruler of Sangama Dynasty? .
(a) Bukka
(b) Devaraya II
(c) Harihara II
(d) Krishna’Devaraya
Answer:
(b) Devaraya II

Vijayanagar And Bahmani Kingdom Question And Answer Pdf Question 2.
Which was the most common animal depicted on the pillars of Vijayanagara style?
(a) Elephant
(b) Horse
(c) Cow
(d) Deer
Answer:
(b) Horse

Question 3.
Find the odd one out
Harihara II, Muhammad I, Krishnadeva Raya, Devaraya I
Answer:
Muhammad I

Question 1.
The four dynasties of Vijayanagara kingdom with reference to prominent rulers of each dynasty.
Answer:
Four dynasties, namely

Question 2.
Battle of Talikota.
Answer:
The sultans of Deccan kingdoms formed a league to fight the Vijayanagar Empire. The combined forces of the enemies met at Sadasiva Raya Talikota in 1565. In the ensuing battle, known as Rakasa Tangadi (Battle of Talikota), Vijayanagar was defeated.

Question 3.
The structure of governance in Vijayanagar kingdom.
Answer:

Question 5.
The educational reforms of Ala-ud-din Hasan Shah
Answer:
Alaud-din Hasan Shah on his accession, took special care in founding a school to educate his sons and opened institutions for the purpose of educating the children of noble families in the art of soldiery.

Question 1.
Discuss the career and achievements of Krishna Devaraya.
Answer:
(i) Krishnadevaraya who reigned for 20 years was the most illustrious rulers of the Tuluva dynasty.

(ii) He brought under control the independent chieftains in the Tungabhadra river basin.

(iii) The Bahmani sultan, Mahmud Shah, had been overthrown and kept in imprisonment by his minister. Krishnadevaraya freed the sultan and restored him to the throne. Prataparudra negotiated for peace and offered to marry off his daughter to him.

(iv) Accepting the offer, Krishnadevaraya returned the territory he had conquered from Prataparudra.

(v) Krishnadevaraya, with the assistance of the Portuguese gunners, could easily defeat the Sultan of Golconda and subsequently take over Raichur from the ruler of Bijapur.

(ii) He built the famous temples of.Krishnaswamy, Hazara Ramaswamy and Vithalaswamy in the capital city of Hampi.

(iii) He distributed the wealth he gained in wars to all major temples of South India for the purpose of constructing temple gateways (gopura), called ‘Rayagopuram,’ in his honour.

(iv) He had good friendly relationship with the Portuguese and Arabian traders, which increased the Empire’s income through customs.

(ii) In the battle of Talikota, the Vijayanagar empire was completely defeated. Both the Vijaya nagar and Bahamani kingdoms claimed Raichur doab lying between Krishna and Tungabadhra because of its fertile rich land. Both wanted to conquer Golconda because of its gold mines. Both the powers descried to extend their. Kingdom and had religious jealousy. Each considered the other as a danger to its existence. 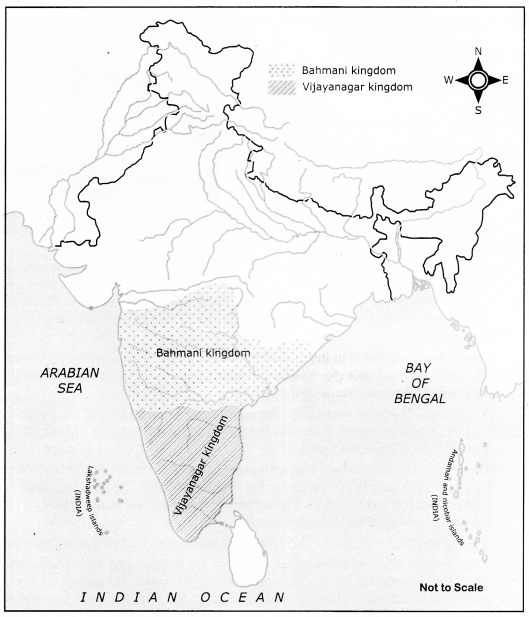 Question 2.
Name the Bahmani Sultan who was restored to the throne by Krishna Devaraya
Answer:
Mahmud Shah

Question 1.
Collect information about temples in Tamil Nadu with the influence of Vijayanagara style of art and architecture. Also read the stories of Tenali Ramakrishna in the classroom.
Answer:
Temple architecture received a new impetus and reached to new heights under the patronage of the Vijayanagar rulers. About the architecture of the period. Prof. S.K. Saraswati has observed, “The most frequent design is one in which the shaft becomes either a central core or background for a group of statuary, of substantial proportion and carved practically on the ground. Important features of Vijayanagar style of temple and architecture were: monolithic pillars, ornate brackets, decoration on exterior side of the walls, etc. 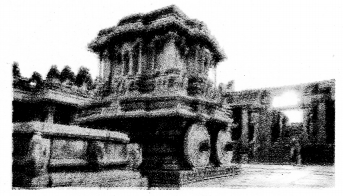 A large number of temples were built during this period. Krishnadevaraya built a temple dedicated to Lord Krishna. He renovated several temples. The most important was the temple of Hazara Rama. The royal family worshipped there. Its most interesting features were the four finely polished black stone pillars which support the ‘Mandapa’.

They have beautiful sculptures carved on them. The deities on the pillars represent Vishnu, Lakshminarayana, Krishna, Brahma and others. Scenes from the lipics are depicted on the outer walls of the shrine.

A number of temples were built during the medieval period in the South cities of Vellore, Kumbhakonam, Kalahsti. Srirangam, Conjeevam and Virinchipuram were dotted with magnificent temples.

A ‘rath’ in stone with finely carved wheels adds beauty to Vitthalaswami temple.

‘Gopurams’ – the entrances to the courts of the temples are a unique feature of the south Indian temples, particularly built during the medieval period. These colossal gateways which lend glamour and prestige to the temples were covered by lofty pyramidal tower rising up in storeys and ultimately crowned by a lofty vault. The ‘gopuram’ in the temple of Ekambaranath having ten storeys rising to the height of 188 feet is the most remarkable one.

I. Choose the correct

Question 1.
The _______ kingdom spread all over the Maharashtra region and partly over karnataka.
(a) Bahmani
(b) Chola
(c) Chera
(d) Vijayanagar
Answer:
(a) Bahmani

Question 6.
The site of the city of Vijayanagar on the bank of the river _______.
(a) Krishna
(b) Narmada
(c) Godavari
(d) Tungabhadra
Answer:
(d) Tungabhadra

VI. Answer In one or two sentences

Question 1.
Name the Five sultanates into which the Bahmani kingdom split in the sixteenth century.
Answer:
Bijapur, Ahmednagar, Golconda, Bidar and Berar.

Question 3.
Write a short note on the economic condition of Vijayanagar kingdom.
Answer:

Question 4.
Give an account of the irrigation polices of Vijayanagar empire.
Answer:
Ahuge tank was built with the help of Portuguese masons. Channels were constructed to supply water from the tank to different parts of the city. The city was well stocked with a variety of agricultural goods.

Question 6.
Describe the growth of trade in the Vijayanagar empire.
Answer:
(i) During the Vijayanagar Empire, inland, coastal and overseas trade flourished in goods such as silks from China, spices from the Malabar region and precious stones from Burma (Myanmar).
(ii) Vijayanagar traded with Persia, South Africa, Portugal, Arabia, China, Southeast Asia and Sri Lanka.

Question 8.
Write a short note on the Golconda Fort.
Answer:
The Golconda Fort is located about 11 kilometres from Hyderabad on a hill 120 meters height. The fort is popular for its acoustic architecture. The highest point of the fort is Bala Hissar. It is believed that there is a secret underground tunnel, which leads from the Turbar Hall to one of the palaces at the foot of the hills.

Question 10.
Name the places in which schools were founded by the successors of Sultan Firoz.
Answer:
Gulbarga, Bidar, Daulatabad and Kandahar

Question 11.
Mention the salient features of Mahamed Gawan’s madrasa in Bidar.
Answer:
Mahmud Gawan’s world famous madrasa in Bidar, with a large library, containing a collection of3000 manuscripts, is illustrative of the importance given to scholarship and education by Gawan.

(ii) Prominence of pillars and piers, in large numbers, and the manner in which they were sculptured are hallmarks of the Vijayanagara style.

(iii) Horse was the most common animal to be depicted on the pillars. The structures have a mandapam (open pavilion) with a raised platform, generally meant for seating the deity on special occasions.

(iv) These temples also have a marriage hall with elaborately carved pillars.

Question 2.
Give an account of the eight ministers of the Bahmani state.
Answer: