You can Download Samacheer Kalvi 8th Science Book Solutions Guide Pdf, Tamilnadu State Board help you to revise the complete Syllabus and score more marks in your examinations.

8th Science Microorganisms Question 1.
Assertion : Malaria is caused by Protozoa.
Reason : The disease is transmitted by mosquito.
Answer:
(a) Both Assertion and Reason are true and Reason is the correct explanation of Assertion

Microorganisms Are Measured In Answer Question 2.
Assertion : Algae are heterotrophic.
Reason : They don’t have chlorophyll.
Answer:
(d) Both Assertion and Reason are false

Question 1.
Write the four types of bacteria, based on their shape.
Answer:
Bacteria are described according to the shape of their cells. They are:

Question 2.
What are antibiotics?
Answer:
Antibiotic is a substance produced by living organisms which is toxic for other organisms. Example: Penicillin.

Question 5.
Why micro organisms are essential for agriculture?
Answer:
Role of microbes in agriculture:
1. Natural fertilizer:
Microbes like bacteria, fungi act as decomposers and break down the dead and degradable waste of plants and animals. During this process nutrients are released into the soil and the soil becomes fertile. This compost is called natural fertilizer.

Question 1.
Write a short note on bacteria and its structure.
Answer:
1. Bacteria are single – celled prokaryotes (cells without nuclei).

2. Bacteria are grouped under the kingdom Monera. The study of Bacteria is called Bacteriology.

3. Bacteria are of two types based on respiration

4. A bacterium has an outer covering known as the cell wall. Nuclear material is represented by a nucleoid without nuclear membrane.

5. An extra chromosomal DNA called plasmid is present in the cytoplasm.

7. Bacteria are described according to the shape of their cells. They are:

Bacteria are also classified according to number and arrangement of flagella as follows:

Question 2.
How micro organisms are useful in the field of medicine?
Answer:
Role of microbes in medicine:
We obtain antibiotics and vaccines from microbes.

1. Antibiotics:
It is a substance produced by living organisms which is toxic to other organisms. The antibiotic penicillin got from the fungus Penicillium chrysogenum is used to treat diseases like tetanus, diphtheria. Streptomycin got from streptomyces bacteria is used to cure bacterial infections like plague.

2. Vaccines:
They are prepared from dead or weakened microbes. When a vaccine is injected into the body of a patient, it produces antibodies to fight the germs. These antibodies protect the body from infections in future. Example: MMR vaccine for measles. 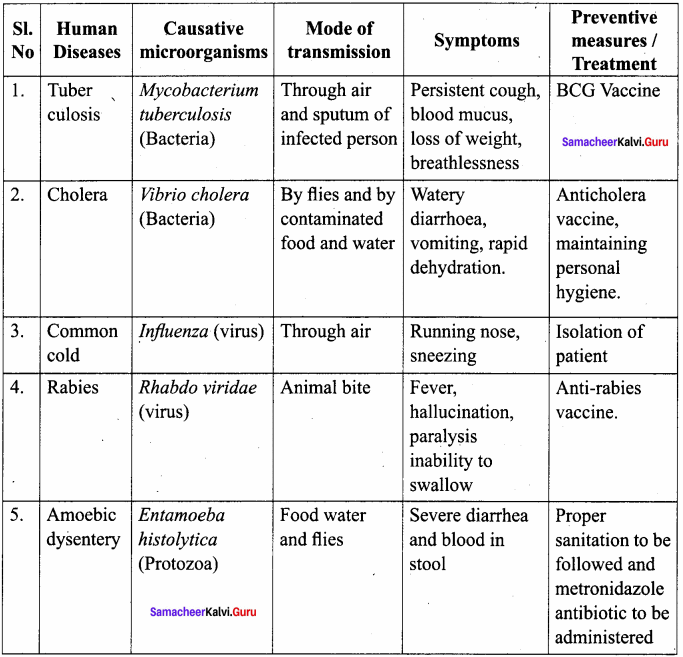 Question 5.
Write a short note on Probiotics.
Answer:
Probiotics:
Probiotics are live food supplements used in yoghurt and other fermented milk products. Example: Lactobacillus acidophilus and Bifidobacterium bifidum. These bacteria improve the microbial spectrum in the gut and thus contribute to the following effects:

Question 4.
Mushroom is the part of the fungus which produces spores.
Answer:
True.

Question 1.
Assertion (A) : Fungi are heterotrophic in nutrition.
Reason (R) : They lack chlorophyll.
Answer:
(a) Both Assertion and Reason are true and Reason is the correct explanation of Assertion

Question 1.
What is a plasmid?
Answer:
Extra chromosomal DNA present in bacteria is called plasmid.

Question 3.
What are chemosynthetic bacteria?
Answer:
Bacteria that live in harsh environment use chemicals (Ammonia, hydrogen sulphide) to produce their food instead of utilizing energy from the sun. This process is called chemosynthesis.

Question 4.
Why does yeast help in fermentation?
Answer:
It respires anaerobically and has an enzyme called zymase to bring about fermentation.

Question 6.
What is biocontrol?
Answer:
Use of microbes to protect crops is called biocontrol.
Example : Trichoderma (fungi) protects plant roots from pathogens.

Question 7.
What is pasteurization?
Answer:

Question 3.
Draw a diagram of a bacteriophage and label the parts.
Answer: 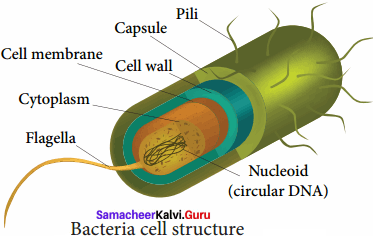 Question 4.
How are protozoans classified?
Answer:

Question 5.
What is pseudopodia?
Answer:
In amoeba pseudopodia are the extended part of cell membrane. It helps to catch its prey (algae).

Question 6.
What is retting?
Answer:
Flax plants are tied in bundles and kept in water. Bacteria loosen the supporting fibres of the stem by acting on the stem tissues. This process is known as retting.

Question 7.
Mention the symptoms and preventive measures undertaken for foot and mouth disease in animals.
Answer:

Question 8.
Draw a virion and label the parts.
Answer: 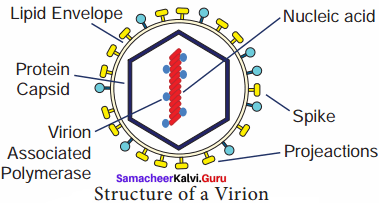 Question 1.
How are microbes useful in industry?
Answer:
1. Sewage Treatment:
Aerobic microbes are allowed to grow in the primary effluent during the secondary stage of waste water treatment. These microbes consume the major part of the organic matter in the effluent example Nitrobacter sps. In the anaerobic treatment of sewage Methanobacterium is used.

2. Production of Biogas:
Human and animal faecal matter and plant wastes are broken down by anaerobic bacteria to produce methane (biogas) along with carbon dioxide and hydrogen. These bacteria are called as methanogens.

3. Production of Alcohol and Wine:
Alcoholic drinks are prepared by fermentation process using yeast. Sugars in grapes are fermented by using yeast. Beer is produced by the fermentation of sugars in rice and barley.

4. Microbes in Retting and Tanning Process:
1. Retting:
Flax plants are tied in bundles and kept in water. Bacteria loosen the supporting fibres of the stem by acting on the stem tissues. This process is known as retting. Linen thread is made from these fibres example Pseudomonas aeruginosa.

2. Tanning:
In Tanning industry bacteria act upon the skin of animals and makes it soft and therefore it becomes pliable. 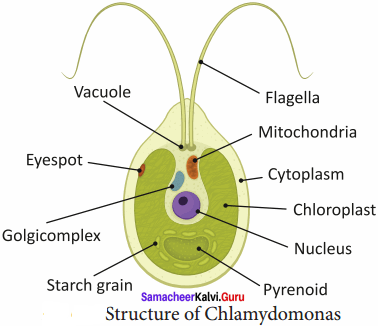