You can Download Samacheer Kalvi 8th Science Book Solutions Guide Pdf, Tamilnadu State Board help you to revise the complete Syllabus and score more marks in your examinations.

I. Choose the best answer

Question 2.
State the Law of Constant Proportions.
Answer:
Law of constant proportions states that in a pure chemical compound the elements are always present in definite proportions by mass.

Question 7.
Write the names of the following compounds.

Question 1.
Find the valency of the element which is underlined in the following formula.

Question 2.
Write the chemical formula for the following compounds

Question 3.
Write the skeleton equation for the following word equation and then balance them.

Question 1.
Why does a light paddle wheel placed in the path of cathode rays begin to rotate, when cathode rays fall on it?
Answer:
It is because the small particles of the cathode rays (electrons) have mass and energy. This energy is used in rotating the paddle wheels.

Question 3.
Ruthresh, Hari, Kanishka and Thahera collected different samples of water from a well, a pond, a river and underground water. All these samples were sent to a testing laboratory. The test result showed the ratio of hydrogen to oxygen as 1:8.

Question 1.
Write the chemical formula of the compounds 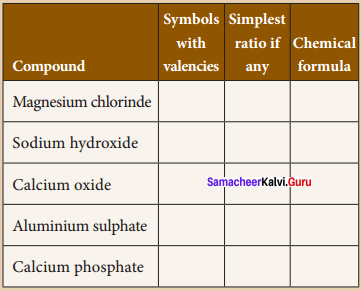 Question 1.
Write the names of the chemical compounds. 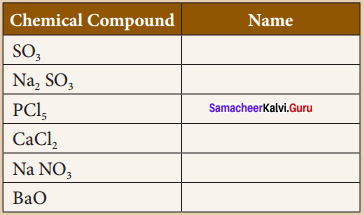 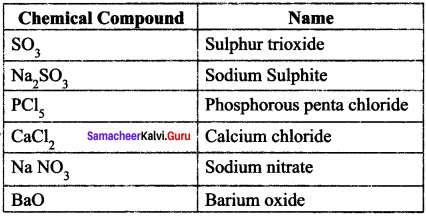 I. Choose the correct answer :

Question 3.
The valency of which of the element is zero.
(a) iron
(b) hydrogen
(c) helium
(d) oxygen
Answer:
(c) helium

Question 7.
Isotopes exist because atoms of the same element can have different numbers of –
(a) protons
(b) neutrons
(c) electrons
(d) none
Answer:
(b) neutrons

Question 3.
Relative charge of an electron is – 1.
Answer:
True

Question 4.
Atoms of the same element are identical in all respects.
Answer:
True

Question 8.
The combining capacity of an atom is called valency.
Answer:
True

Question 9.
Helium has two electrons in the outermost orbit and so it is chemically inert.
Answer:
True

Question 1.
Assertion : Proton can be defined as a hydrogen ion (H+).
Reason : These protons are produced when one electron is removed from one hydrogen atom.
Answer:
(a) Both assertion and reason are true and the reason is the correct explanation of the assertion

Question 1.
What is an atom?
Answer:
Atom is the smallest particle of matter that takes part in a chemical reaction.

Question 3.
What is the charge of a neutron?
Answer:
Neutron is a neutral particle, that is it carries no charge.

Question 5.
Define Orbits.
Answer:
Electrons revolve around the nucleus in a circular fixed paths is called orbits or shells.

Question 6.
Name the subatomic particles of an atom.
Answer:
Proton, electron and neutron.

Question 7.
Define nucleus.
Answer:
The nucleus is the central dense core of the atom consisting of neutrons and protons.

Question 10.
What are the two types of valency?
Answer:
Positive valency and negative valency.

Question 13.
What are fluorescent materials?
Answer:
When invisible radiation falls on materials like zinc sulphite, they emit a visible light (or glow). These materials are called fluorescent.

Question 16.
What is atomic number?
Answer:
The total number of protons present in the nucleus of an atom is called its atomic number.

Question 17.
What is mass number?
Answer:
The total number of protons and neutrons present in the nucleus of an atom is called as mass number.

Question 20.
Draw a diagram to show the electronic configuration of sodium atom.
Answer: 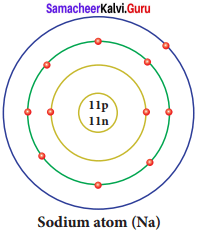 Question 21.
Draw a diagram to show the electronic configuration of chlorine atom.
Answer: 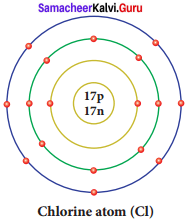 Question 23.
Write the names for the following compounds,

Answer:
1. J.J. Thomson’s atom model with the help of a diagram: 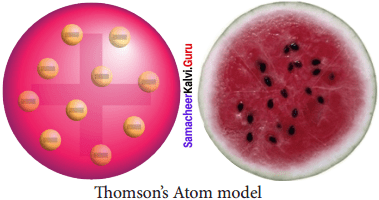 Question 2.
Write a note on valency with respect to –

Answer:
1. Valency with respect to Chlorine:

2. Valency with respect to oxygen:

Step 2:
Write the valencies of the two radicals above their symbols to the right in superscript (Signs ‘+’ and ‘-‘ of the ions are omitted).

Step 3:
Reduce the valencies to simplest ratio if needed. Otherwise interchange the valencies of the elements/ions. Write these numbers as subscripts. However, ‘1’ appearing on the superscript of the symbol is omitted.

Question 5.
What are the points to be followed while balancing a chemical equation?
Answer:
1. Initially the number of times an element occurs on both sides of the skeleton equation should be counted.

4. The number of molecules of reactants and products are written as coefficient.

5. The formula should not be changed to make the elements equal.

Question 6.
What information are not conveyed by a balanced chemical equation?
Answer:

Thus the chemical formula for calcium chloride is CaCl2.

Question 9.
Describe an experiment to prove that during a chemical charge, the total mass of matter remains the same.
Answer:
1. Prepare 5% of barium chloride (5g of BaCL in 100 ml of water) and sodium sulphatesolutions separately.

3. Hang the test tube in the conical flask. 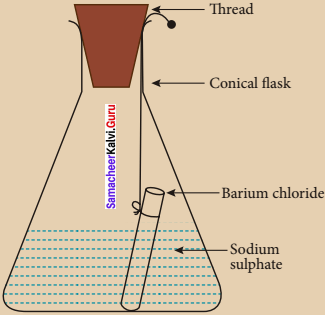 5. Record your observation. It can be seen that the weight of the flask and the contents remains the same before and after the chemical change.

6. Hence, it is proved that during a chemical change, the total mass of matter remains the same.

Question 11.
Explain the construction of cathode Ray Tube (CRT) with a diagram.
Answer:

VIII. Solve the following crossword puzzle with the help of the given clues.

Question 1.
Across:
1. The particles that build up an atom.
3. The arrangement of electrons in a succession of energy levels or shells.
5. An electrically neutral sub atomic particle that is part of the nucleus of an atom.
6. A whole number that represents the ability of an atom or a group of atoms to combine with other atoms or group of atoms.
7. The number of protons in the nucleus of an atom.
8. The smallest unit of an element that maintains the properties of an element.
A sub – atomic particle that has a positive electric charge.
Down:
2. A substance that cannot be broken down into simpler substance by chemical means.
4. The total number of protons and neutrons present in the nucleus of an atom.
9. An ion that has a negative charge.
11 A sub – atomic particle with a negative electric charge.
12. Positively charged ions.
Answer: