Question 2.
Who introduced the paper money?
(a) British
(b) Turkish
(c) The Mugual Empire
(d) Mauryas
Answer:
(a) British

Question 4.
Which is the Bank Money?
(a) Cheque
(b) Draft
(c) Credit and Debit cards
(d) All the above
Answer:
(a) Cheque

Question 5.
Pick out the incorrect one:
Investment can be made in different vehicle.
(a) Stock
(b) Bonds
(c) Mutual fund
(d) Pay tax
Answer:
(d) Pay tax

Fill in the Blanks

IV. Write the one word answer

Question 1.
Barter system had many deficiency like –
I. Lack of double coincidence of wants
II. No difficulties of storing wealth
III. Common measure of value
IV. Indivisibility of commodities

VI. Find out the odd one

Question 1.
What is the Barter System?
Answer:
A barter system is an old method of exchange. Barter system is exchanging goods for goods without the use of money in the primitive stage.

Question 2.
What are the recent forms of money?
Answer:
Plastic Money and E – Money

Question 3.
Short note on E – Banking and E – Money.
Answer:
1. E – Money:
Electronic Money is money which exists in banking computer systems and is available for transactions through electronic system.

2. E – Banking:
Electronic banking, also known as National Electronic Funds Transfer (NEFT), is simply the use of electronic means to transfer funds directly from one account to another rather than by cheque or cash.

Question 4.
What are the essential of Money in your life?
Answer:
Money is used as the source to fulfill basics needs as well as comforts in life. It gets people accommodation, clothes, food and other things which add to luxury in life. It is an important source to live a healthy life too.

Question 5.
What is the Value of Money?
Answer:
Value of money is the purchasing power of money over goods and services in a country.

Question 7.
What is Savings and Investment?
Answer:

Question 8.
What is meant by Black Money?
Answer:
Black Money is money earned through any illegal activity controlled by country regulations.

Question 9.
What are the effects of black money on economy?
Answer:

Question 1.
What are the disadvantages of barter system?
Answer:

Question 2.
Write about the evolution of Money.
Answer:
Money has evolved through different stages according to the time, place and circumstances.

1. Commodity Money:
In the earliest period of human civilization, any commodity that was generally demanded and chosen by common consent was used as money. Example Goods like furs, skins, salt, rice, wheat, utensils, weapons etc. Such exchange of goods for goods was known as ‘Barter Exchange’.

2. Metallic Money:
With progress of human civilization, commodity money changed into metallic money. Metals like gold, silver, copper, etc. were used as they could be easily handled. It was the main form of money throughout the major portion of recorded history.

3. Paper Money:
(a) It was found inconvenient as well as dangerous to carry gold and silver coins from place to place. So, invention of paper money marked a very important stage in the development of money.

(b) Paper money is regulated and controlled by Central bank of the country (Reserve Bank of India). At present, a very large part of money consists mainly of currency notes or paper money issued by the central bank.

4. Credit Money or Bank Money:
(a) Emergence of credit money took place almost side by side with that of paper money. Example Cheque.

(b) The cheque (known as credit money or bank money), itself, is not money, but it performs the same as functions of money.

5. Near Money:
The final stage in the evolution of money has been the use of bills of exchange, treasury bills, bonds, debentures, savings certificate etc.

Question 3.
What are the functions of Money? and explain it.
Answer:
Functions of money are classified into Primary or Main function, Secondary function and Contingent function.

1. Medium of exchange or means of payment – Money is used to buy the goods and services.

2. Measure of value – All the values are expressed in terms of money it is easier to determine the rate of exchange between various type of goods and services.

Secondary functions:
The three important of secondary functions are
1. Standard of deferred payment – Money helps the future payments too. A borrower borrowing today places himself under an obligation to pay a specified sum of money on some specified future date.

2. Store of value or store of purchasing power – Savings were discouraged under barter system as some commodities are perishable. The introduction of money has helped to save it for future as it is not perishable.

2. Savings Deposits:
Savings deposits are opened by customers to save the part of their current income. The customers can withdraw their money from their accounts when they require it. The bank also gives a small amount of interest to the money in the saving deposits.

3. Current Account Deposit:
Current accounts are generally opened by business firms, traders and public authorities. The current accounts help in frequent banking transactions as they are repayable on demand.

4. Fixed Deposits:
Fixed deposits accounts are meant for investors who want their principle to be safe and yield them fixed yields. The fixed deposits are also called as Term deposit as, normally, they are fixed for specified period.

Question 5.
What are the difference between savings and investment?
Answer:

Question 1.
If there is no invention of money – Imagine.
Answer:
Money is one of the most fundamental inventions of mankind. “Every branch of knowledge has its fundamental discover”. In mechanics, it is the wheel, in science fire, in politics the vote. Similarly in economics, in the whole commercial side of Man’s social existence, money is the essential invention on which all the rest is based. 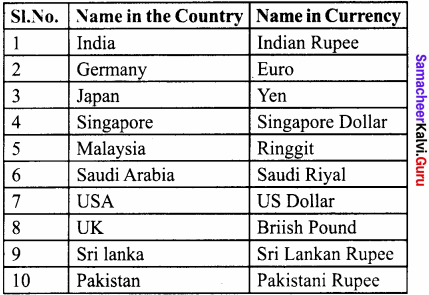 Question 5.
The receipts of ………….. were a substitute for money and became paper money.
(a) Bankers
(b) Gold smiths
(c) Carpenters
(d) Zamindars
Answer:
(b) Gold smiths

Question 1.
(i) In November 2016, Government of India announced demonetization of all 100 rupee bank notes
(ii) Demonetization is a step against Black money.
(iii) Prevention of corruption Act was passed in 1988.
(iv) Benami transactions prohibition act 1988 was amended in 2011.

V. Find the odd one

Question 1.
What is Robertson’s definition of money?
Answer:
Robertson is defined as, “Money is anything which is widely accepted in payment for goods or in discharge of other business obligations”.

Question 3.
How were the British coins termed?
Answer:
The British gold coins were termed as Carolina, the silver coins as Angelina, the copper coins as cupperoon and the tin coins as tinny.

Question 8.
State some ways in which investments are made.
Answer:
Investment can be made in different investment vehicles like,

Question 10.
Brief the recent steps of the Government of India against black money.
Answer:

Question 1.
What are the benefits of saving?
Answer:
Benefits of Savings