The Christmas Truce Warm Up:

Question.
How do you celebrate that festival?
Answer:
We celebrate the festival by arranging beautiful dolls as Kolu at home.

Question.
A Narrate a memorable incident which happened during that celebration?
Answer:
During a Navarathri Kolu, a press reporter took snaps of our doll arrangement. That week, we received a special prize for best Kolu. Our Kolu picture appeared in the newspaper.

A. Choose the correct answer.

B. Identify the Character, Speaker or both of the following lines.

Question 1.
It is a letter to his sister.
Answer:
British soldier’s sister Janet

Question 2.
It splatters and cakes everything, and constantly sucks at our boots.
Answer:
British Soldier Tom

Question 3.
I grabbed my rifle, stumbled out into the trench, and stuck my head cautiously above the sandbags.
Answer:
Tom

Question 1.
Narrate the Christmas celebration as happened in the war field.
Answer:
On Christmas eve, the soldiers had their first good freeze. Everything was tinged white with frost and a bright sun shone. It was perfect Christmas weather. Clusters of tiny lights were shining all along the German line and they had placed Christmas trees, lit by candles, lanterns, like beacons of goodwill. The Germans began singing, “ Stille nacht.” The British applauded the Germans. Both the troops crossed the barbed wires and were in No Man’s Land.

They shared their joy, greeted and wished each other. They exchanged wonderful presents with all that they had, badges, tea, coffee, buttons, knife, etc… The Christmas celebration was wonderful as joy prevailed everywhere and they longed for peace.

Question 1.
Do you envision a similar truce taking place in any wars or fighting today? Explain.
Answer:
Yes. I feel the same enmity is between India and Pakistan borders. Both the countries were united before the British left India. People who lived as brothers and sisters are now partitioned and called different nationalities. The bond of ‘ brotherhood still exists.

Question 2.
Today, much of what we know about the truce comes from soldiers’ postcards home. In the postcard given below, write a short message home, imagine that you took part in the 1914 Christmas Truce. 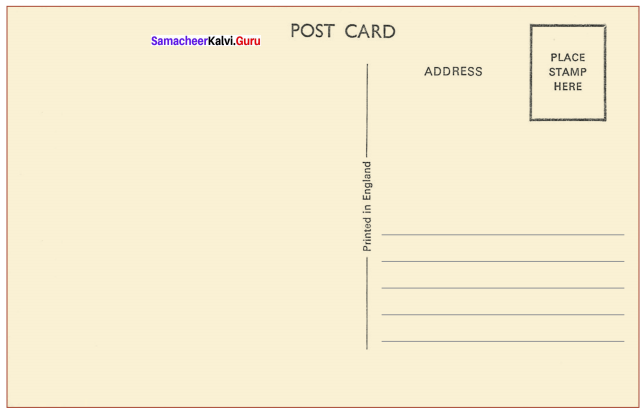 It was a wonderful Christmas this year. We had the opportunity of celebrating ‘ with our foes. Sorry, they are our friends now. We crossed boundaries, exchanged gifts and sang Christmas songs.

It’s all like a dream. I couldn’t believe that the Germans would be too kind, lovable. Hope all this truce ends soon. We long for peace.

The Christmas Truce by Aaron Shepard About The Author:

Aaron Shepard was bom on October 7th, 1950. He is the award-winning author of Savitri. He is well known for many children’s books. Aaron’s specialty is retelling folktales and ‘. other traditional literature from around the world.

This story unfolds a Truce of how the foes on a warrior front become friends on a Christmas eve. It is a British soldier’s letter to his sister. A surprised brother writes to his sister something almost like a fairy tale that blended the enemy soldiers to sing carols before the fire on the battlefields of France. After the first battle was over with many dead soldiers on both sides they were waiting for replacements to come from home. It was a terrible wait expecting an artilleiy shell that would explode and kill or maim several men.

The rain played the worst havoc that made the boots stuck to the ground. This was the case for the German soldier separated by fifty yards bordered by no man’s land-yet close enough as their voices could be heard. We hated them as they had killed many of our soldiers. But we almost felt that we had something in common. As we were experiencing a good freeze with little shelling or rifle fire from either sides, the shooting stopped as darkness fell. But, we were informed that there might be a sudden attack by the Germans.

Waking up, I saw an unbelievable sight as the Germans had placed Christmas trees in front of their trenches lit by candles or lanterns. They started singing carols and we too joined them. Though we couldn’t understand their language, the tune of the song made it clear that they were singing carols. Finally we agreed to cross over and join them to celebrate Christmas forgetting that we were in the war zone.

British Khaki and German’s grey mingled over the bonfire. Many knew English as they had worked in England before. Just when we finished and started to go to our spots, an old German soldier clutched my arm and asked why can’t we just have peace and go home. We are just soldiers following orders and protecting our nation. But I hope, a day will come when there will be no wars when such spirit will be felt by world leaders to offer good wishes instead of warnings, gifts in place of retaliations. All nations want peace, though the author wonders if the wanting is quite enough.