World Of Microbes Class 9 Question 1.
Which of the following is transmitted through air?
(a) Tuberculosis
(b) Meningitis
(c) Typhoid
(d) Cholera
Answer:
(a) Tuberculosis

Chapter 22 World Of Microbes Question 2.
One of the means of indirect transmission of disease is ………………….
(a) sneezing
(b) coughing
(c) vectors
(d) droplet infection
Answer:
(c) vectors

IV. Pick out the odd one.

V. State whether True or False. If false write the correct statement.

VI. Match column A with column B.

Samacheer Kalvi 9th Science Question 3.
Vaccines
Answer:
Preparation of antigenic proteins of pathogens (weakened or killed) which on inoculation into a healthy person provides temporary/permanent immunity against a particular disease.

VIII. Answer the following in brief.

Samacheerkalvi.Guru Science 9th Question 3.
What is triple antigen? Mention the disease which can be prevented by using the antigen.
Answer:
DPT is called triple antigen vaccine as it is a combined vaccine for protection against Diptheria, Pertusis and Tetanus.

Samacheer Kalvi Guru 9th Standard Question 5.
Name the organism causing diarrhoel disease and give one precaution against it.
Answer:
Cholera (Acute diarrhoeal disease) is caused by Vibrio cholerae through contaminated food, water, oral route and through houseflies. It can be prevented by hygienic sanitary condition, intake of Oral Rehydration Solution (ORS).

Samacheer Kalvi Class 9 Science Solutions Question 1.
Give an account of classification of bacteria based on the shape.
Answer:
Bacteria are microscopic, single celled prokaryotic organisms without nucleus and other cell organelles. Although majority of bacterial species exist as single celled forms, some appear to be filaments of loosely joined cells. The size varies from less than 1 to 10 µm in length and 0.2 to 1 µm micrometer in width.
Based on the shapes, bacteria are grouped as:

Microbes in Industries
Microorganisms play an important role in the production of wide variety of valuable products for the welfare of human beings. 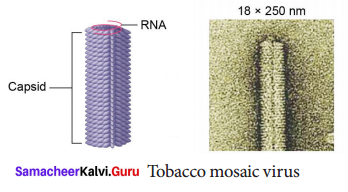 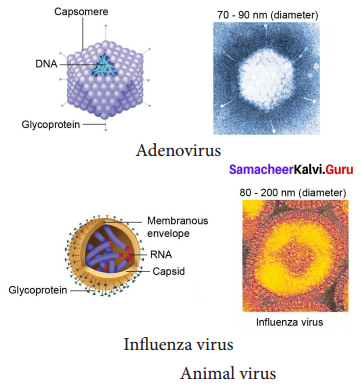 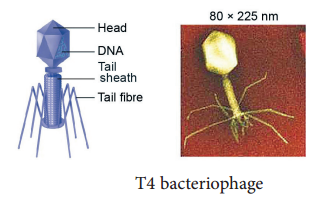 Question 4.
Suggest the immunization schedule for a newborn baby till 12 months of age. Why it is necessary to follow the schedule?
Answer:

The immunization schedule must be followed so that the vaccines administered will protect the children in future from infectious and life-threatening diseases.

Question 2.
Assertion: Dengue can be treated by intake of antibiotics.
Reason: Antibiotics blocks the multiplication of viruses.
Answer:
(d) If both A and R are false.

XI. Questions based on thinking skills.

Question 2.
Tejas suffered from typhoid while, Sachin suffered from tuberculosis. Which disease could have caused more damage and why?
Answer:
Typhoid is a food and water-borne disease which affects the intestines. There are good drugs available for its treatment. If the patient reports to the doctor on time, it can be treated safely. Typhoid vaccine is also available that can protect against further attacks.

Whereas, Tuberculosis is a very tricky disease. Though it basically infects the lungs, it can spread to other parts of the body such as bones, intestines, etc. Another complication of TB is that, once infected, the Mycobacterium remains dormant in the body even after adequate treatment. Whenever the immunity of the patient goes down, TB can resurface again. Therefore, Tuberculosis causes more damage when compared to Typhoid.

Question 1.
Observe the mosquitoes that are active during the day time. Catch them using an insect net and observe their bodies and legs. What do you observe? Why are cases of Dengue reported in large numbers during the post-monsoon season?
Answer:
Mosquitoes of Aedes sp. are active during day time. The special features that can be observed in this mosquito is white bands on its legs and a silver-white pattern of scales on its body.

The female mosquitoes lay their eggs above the water line inside containers that hold water. These containers include tires, buckets, birdbaths, water storage jars, and flower pots which are filled with water due to rains. After the mosquitoes lay their eggs, the mosquito larvae hatch which are aquatic and feed on the microorganisms that is found in water necessary for its growth. Hence, Dengue is reported largely during the post-monsoon season.

Question 2.
Recently in 2018, Nipah virus was in the headlines of the daily newspaper. Collect the following information.

IV. State whether true or false

V. Match column A with column B.

VI. Analyze the table and select the option given below that correctly fills the blank

Question 3.
Peptidoglycan
Answer:
Peptidoglycan is a combination of sugars and amino acids that forms the cell wall of most bacteria.

Question 1.
Write a short note on Fungi.
Answer:
Fungi are larger than bacteria. They lack chlorophyll, hence depend on living or dead host for their nutritional needs. They are spherical in shape.

Question 3.
What are the disease categories based on microbes?
Answer:
Microbial Disease can be categorized based on:

Question 5.
What is Diptheria?
Answer:
Diptheria is caused by Corynebacterium diphtheriae. It generally affects the upper respiratory tract (nose and throat) and causes fever, sore throat and choking of air passage.

Question 6.
Write about Dengue.
Answer:
Dengue is known as break-bone fever. The name break bone fever was given because of the contortions caused due to the intense joint and muscle pain. Dengue haemorrhagic fever is a more severe form and can be life threatening or fatal.

Question 7.
What is immunization?
Answer:
Immunization is a process of developing resistance to infections by the administration of antigens or antibodies. It is an effective way of controlling the spread of infection by strengthening the host defenses.

Question 2.
Write in detail about the diseases transmitted by animals.
Answer:
Diseases Transmitted by Animals:
Swine Flu is so termed because the virus that first caused the disease had originated from pigs. People with weak immune system are at high risk of contracting swine flu. It is an acute respiratory virus which is contagious and spreads through air. Swine flu is caused by virus that affects pigs and has started infecting humans as well. Influeuza virus FI1N1 has been identified as the cause of this disease.

Avian influenza is a contagious bird disease caused by a number of viruses. Birds that can carry and spread an avian influenza virus include poultry (like chickens, turkeys or ducks), wild birds and even pet birds.

Question 4.
Write short notes on antibiotics and vaccines.
Answer:
Antibiotics are metabolic products of microorganisms, which in very low concentration are inhibitory or detrimental to other microbes. In 1929, Alexander Fleming produced the first antibiotic pencillin. In human beings antibiotics are used to control infectious diseases like cholera, diptheria, pneumonia, typhoid, etc.

Vaccines are prepared by killing or making the microbes inactive (attenuated). These inactive microbes are unable to cause the disease, but stimulate the body to produce antibodies against the antigen in the microbes.