Question 1.
Which of the following pteridophyte is used as a biofertiliser?
(a) Marsilea
(b) Pteridium
(c) Pteris
(d) Azolla
Answer:
(d) Azolla

Question 2.
Which is not a character of root stock?
(a) Nodes
(b) Intemodes
(c) Terminal bud
(d) Root cap
Answer:
(d) Root cap

Question 4.
Which of the following alone is formed in the division of plant cells?
(a) Aster
(b) Centrioles
(c) Spindle
(d) Microtubules
Answer:
(c) Spindle

Question 8.
Which among the following step is common in both aerobic and anaerobic respiration?
(a) Pyruvate oxidation
(b) Glycolysis
(c) ETC
(d) TCA cycle
Answer:
(b) Glycolysis

Question 11.
What are vernacular names? Give an example.
Answer:
Vernacular names are kjiown as common names, Example: Albizia amara L. is called as Usilai in South Tamil Nadu and Thurinji in North Tamil Nadu.

Question 12.
What is the role of plasmodesmata in a plant cell?
Answer:
Plasmodesmata act as a channel between the protoplasm of adjacent cells through which I many substances pass through.

Question 13.
Define transport in plants. Mention the tissues involved in transportation.
Answer:
Transport is the process of moving water, minerals and food to all parts of the plant body.
Conducting tissues such as xylem and phloem play an important role in transport.

Question 14.
What is a Lichen?
Answer:
Lichens is a mutual association of Algae and Fungi. Algae prepares food and fungi absorbs water and provides thallus structure.

Answer any three questions in which question number 19 is compulsory. [3 x 3 = 9] 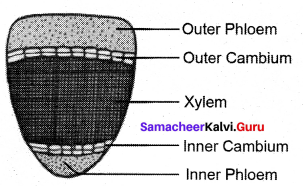 Question 20.
Define ptyxis & explain its types.
Answer:
Rolling or folding of individual leaves is called ptyxis. There are seven types of ptyxis as follows: 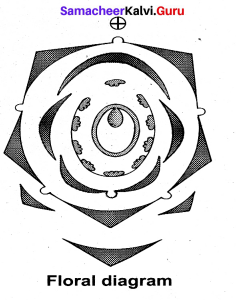 Question 21.
Explain about Cohesion – Tension Theory.
Answer:
Cohesion-tension theory was originally proposed by Dixon and Jolly (1894) and again put forward by Dixon (1914, 1924). This theory is based on the following features:

i. Strong cohesive force or tensile strength of water: Water molecules have the strong mutual force of attraction called cohesive force due to which they cannot be easily separated from one another. Further, the attraction between a water molecule and the wall of the xylem element is called adhesion. These cohesive and adhesive force works together to form an unbroken continuous water column in the xylem. The magnitude of the cohesive force is much high (350 atm) and is more than enough to ascent sap in the tallest trees.

The water vapours are then transpired through the stomatal pores. Loss of water from mesophyll cells causes a decrease in water potential. So, water moves as a pull from cell to cell along the water potential gradient. This tension, generated at the top (leaf) of the unbroken water column, is transmitted downwards from petiole, stem and finally reaches the roots. The cohesion theory is the most accepted among the plant physiologists today.

It is due to the presence of zymase enzyme in yeast which converts the glucose solution into alcohol and CO2. Now introduce a pellet of KOH into the tube, the KOH will absorb CO2 and the level of solution will rise in upnght tube. 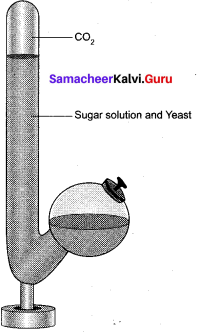 Question 2.
Which of the following animals has a true coelom?
(a) Ascaris
(b) Pheretima
(c) Sycon
(d) Taenia Solium
Answer:
(b) Pheretima

Question 11.
Define tissues.
Answer:
Group of cells that are similar in structure and perform a common or related functions are called tissues. 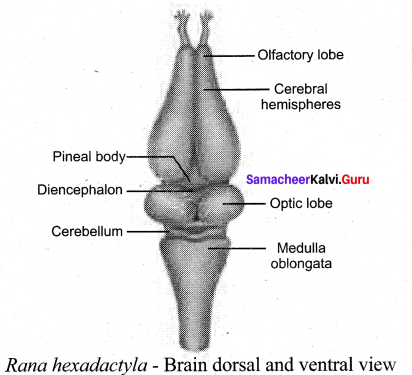 Question 13.
Name the proteins which regulates the contraction of muscles.
Answer:
Actin, myosin, tropomyosin and troponin.

Question 16.
How does cockroach survive without a head?
Answer:
A cockroach can live for a week without its head. Due to their open circulatory system, and the fact that they breathe through little holes on each of their body segments, since they are not dependent on the mouth or head to breathe. The cockroach dies later due to starvation.

Question 18.
Explain limbic systems.
Answer:
Limbic system: The inner part of the cerebral hemisphere constitutes the limbic system. The main components of limbic system are olfactory bulbs, cingulate gyrus, mammillary body, . amygdala, hippocampus and hypothalamus. The limbic system is called ‘emotional brain’ because it plays a primary role in the regulation of pleasure, pain, anger, fear, sexual feeling and affection. The hippocampus and amygdala also play a role in memory. Brain stem is the part of the brain between the spinal cord and the diencephalon. It consists of mid brain, pons varolii and medulla oblongata.

Question 19.
Draw the diagram and label the parts of lobes of cerebral hemisphere.
Answer: 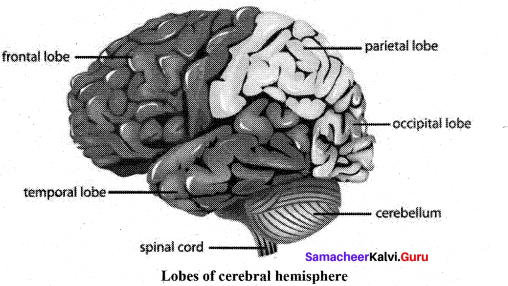 Question 20.
Write the general characteristics of phylum Echinodermata.
Answer:
All Echinoderms are marine animals. The adults are radially symmetrical but the larvae are bilaterally symmetrical. These animals have a mesodermal endoskeleton of calcareous ossicles and hence the name Echinodermata (spiny skin). They are exclusively marine with organ system level of organisation. The most distinctive feature of echinoderms is the presence of the water vascular system or ambulacral system with tube feet or podia, which helps in locomotion, capture and transport of food and respiration.

The digestive system is complete with mouth on ventral side and anus on the dorsal side. Excretory organs are absent. The nervous system and sensory organs are poorly developed. The circulatory system is open type without heart and blood vessels. Sexes are separate. Reproduction is sexual and fertilization is external, pevelopment is indirect with free swimming bilaterally symmetrical larval forms. Some echinoderms exhibit autotomy with remarkable powers of regeneration.

Explain the respiratory system of Rana hexadactyla.
Answer:
Frog respires on land and in the water by two different methods. In water, skin acts as aquatic respiratory organ (cutaneous respiration). Dissolved oxygen in the water gets, exchanged through the skin by diffusion. On land, the buccal cavity, skin and lungs act as the respiratory organs. In buccal respiration on land, the mouth remains permanently closed while the nostrils remain open. The floor of the buccal cavity is alternately raised and lowered, so air is drawn into and expelled out of the buccal cavity repeatedly through the open nostrils. Respiration • by lungs is called pulmonary respiration. The lungs are a pair of elongated, pink coloured saclike structures present in the upper part of the trunk region (thorax). Air enters through the nostrils into the buccal cavity and then to the lungs. During aestivation and hibernation gaseous exchange takes place through skin.

a. Fitness of oyster for operation
The selected oysters for the insertion of nucleus should be healthy and strong enough to overcome the stress during operation

b. Preparation of graft tissues
The piece of tissue which is inserted inside the mantle is called as ‘GRAFT’ tissue. The outer edges of these graft squares must be known because nacre secreting cells are found only on the outer surface of the mantle so it is essential to keep the outer surface in contact with the inserted nucleus.

c. Preparation of nucleus
Any small particle may function as nucleus to initiate the pearl formation but it is reported that calcareous nucleus is the best because the deposition of nacre was found to be more on calcarious nucleus.

d. Insertion of nucleus
For the insertion of nucleus, oysters are fixed in a desk clamp in the position of right valve facing upward. Mantle folds are smoothly touched to expose the foot and the main body mass, followed by an incision into the epithelium of the foot and a slender channel into the main mass one graft tissue which functions as a bed for the nucleus.

e. Post operation care :
Nucleated oysters are placed into cages and suspended into sea water and attached with floating rafts to a depth of 2 to 3 metres for about 6 to 7 days to recover from the shocks due to operation. This period of 6 to 7 days is known as ‘Recovery period’. About 3000 to 3600 nucleated oysters are kept in different cages suspended in sea water at 2 to 3 meters depth for 3 to 6 years and undisturbed except at the time of clearing and inspection.

Write a note on Pectoral girdle.
Answer:
The upper limbs are attached to the pectoral girdles. These are very light and allow the upper limbs a degree of mobility not seen anywhere else in the body. The girdle is formed of two halves. Each half of the pectoral girdle consists of a clavicle or collar bone and a scapula. The scapula is a large, thin, triangular bone situated in the dorsal surface of the ribcage between the second and seventh ribs. It has a slightly elevated ridge called the spine which projects as a flat, expanded process called the acromion.

The clavicle articulates with this process. Below the acromion is a depression called the glenoid cavity which articulates with the head of the humerus to form the shoulder joint. Each clavicle is a long slender bone with two curvatures which lies horizontally and connects axial skeleton with appendicular skeleton. 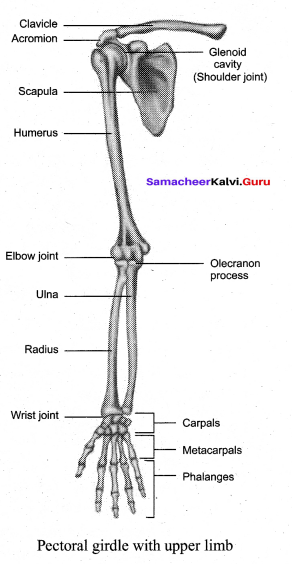