Question 5.
Polyderm is found in the roots and underground stems of family is ………………………
(a) Magnesium
(b) Fabaceae
(c) Solanaceae
(d) Lilliaceae
Answer:
(a) Magnesium

Question 7.
Who proposed the “Theory of photosynthesis in guard cells” ?
(a) Von Mohl
(b) Sayre
(c) Levit
(d) Steward
Answer:
(a) Von Mohl

Question 9.
We are using perfume to our body. Write the name of the plant and their product.
Answer:
Name of the perfume yielding plant – Santalum album. Product – Sandal oil.

Question 11.
Draw the diagram of conjoint, bicollateral and open of vascular system.
Answer:

Question 12.
How does the trees increase their girth ?
Answer:
In plants, the increase in the thickness (girth) of stem and root is by means of secondary growth or longitudinal growth.

Question 13.
Define the Theory of Electro Osmosis.
Answer:
Electro-Osmotic theory: The theory of electro osmosis was proposed by Fenson (1957) and Spanner (1958). According to this, an electricpotential across the sieve plate causes the movement of water along with solutes. This theory fails to explain several problems concerning translocation.

Question 14.
Respiratory Quotient is zero in succulent plants. Why?
Answer:
In some succulent plants like Opuntia, Bryophyllum carbohydrates are partially oxidised to organic acid, particularly malic acid without corresponding release of CO2 but O2 is consumed hence the RQ value will be zero.

Question 15.
Do you agree that virus is living organism? If you say yes, justify your answer.
Answer:
Yes. Viruses have the characters of living organisms because

Question 16.
You are looking like your father or mother in externally. Why? Explain the reason.
Answer:
Externally, we resemble our father or mother upto a certain degree, because the characters of our parents are inherited to us through their genes present in the chromosome of egg (mother) and sperm (father).

2. Trailers (Stragglers): It is a weak stem that spreads over the surface of the ground without rooting at nodes. They are divided into 3 types,

3. Climbers: These plants have long weak stem and produce special organs for attachment , for climbing over a support. Climbing helps to display the leaves towards sunlight and to
position the flower for effective pollination.

i. Root climbers: Plants climbing with the help of adventitious roots (arise from nodes) as in species of Piper betel, Piper nigrum, Hedera helix, Pothos, Hoy a.

iv. Thorn climbers: Climbing or reclining on the support with the help of thorns as in Bougainvillea and Carissa.

vi. Tendril climbers: Tendrils are thread-like coiling structures which help the plants in climbing. Tendrils may be modifications of Stem – as in Passiflora, Vitis and Cissus quadrangularis; Inflorescence axis – Antigonon; Leaf – Lathyrus, Leaflets – Pisum sativum; Petiole – Clematis; Leaftip – Gloriosa; Stipules – Smilax. In pitcher plant (Nepenthes) the midrib of the leaf often coils around a support like a tendril and holds the pitcher in a vertical position. 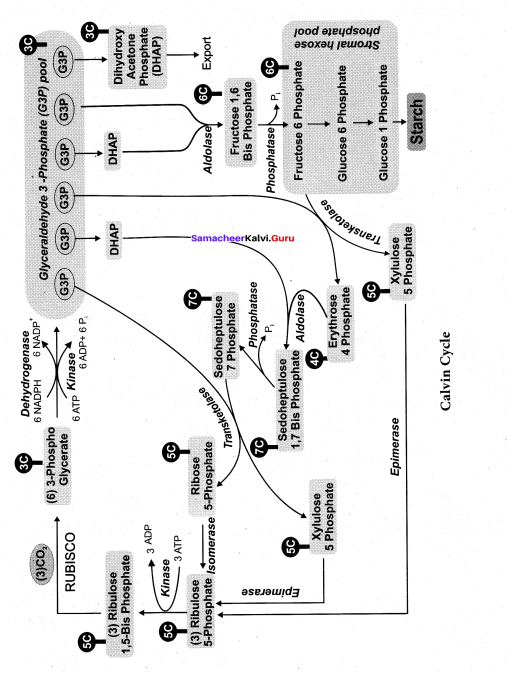 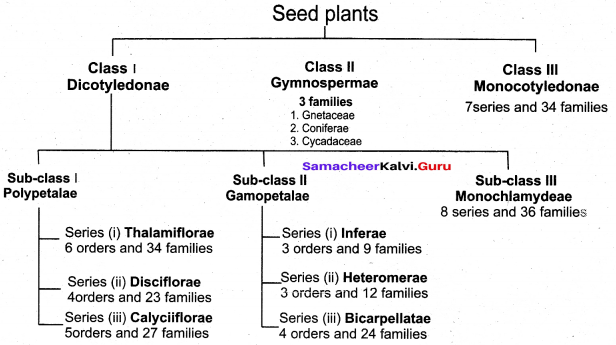 Question 4.
Which plasma protein is involved in the coagulation of blood ?
(a) Globulin
(b) Fibrinogen
(c) Albumin
(d) Serum amylase
Answer:
(b) Fibrinogen

Question 5.
Match Column-I with Column-II and choose the correct option.

Question 10.
How does gall stones are formed?
Answer:
Any alteration in the composition of the bile can cause the formation of stones in the gall bladder. The stones are mostly formed of crystallized cholesterol in the bile. The gall stone causes obstruction in the cystic duct, hepatic duct and also hepato-pancreatic duct causing pain, jaundice and pancreatitis.

Question 11.
At Tuticorin region, the pearl oyster diving people have some changes in their blood. State the reasons for it.
Answer:
When a person descends deep into the sea, the pressure in the surrounding water increases which causes the lungs to decrease in volume. This decrease in volume increases the partial pressure of the gases within the lungs. This effect can be beneficial, because it tends to drive additional oxygen into the circulation, but this benefit also has a risk, the increased pressure can also drive nitrogen gas into the circulation.

This increase in blood nitrogen content can lead to a condition called nitrogen narcosis. When the diver ascends to the surface too quickly a condition called ‘bends’ or decompression sickness occurs and nitrogen comes out of solution while stilUin the blood forming bubbles. Small bubbles in the blood are not harmful, but large bubbles can lodge in small capillaries, blocking blood flow or can press on nerve endings.

Decompression sickness is associated with pain in joints and muscles and neurological problems including stroke. The risk of nitrogen narcosis and bends is common in scuba divers.

Question 12.
Depolarization means reversal of polarity. Mention the iconic charge of both sides of axolemma.
Answer:
Depolarization – Reversal of polarity
When a nerve fibre is stimulated, sodium voltage-gate opens and makes the axolemma permeable to Na+ ions; meanwhile the potassium voltage gate closes. As a result, the rate of flow of Na+ ions into the axoplasm exceeds the rate of flow of K+ ions to the outside fluid [ECF], Therefore, the axolemma becomes positively charged inside and negatively charged outside. This reversal of electrical charge is called Depolarization.

Question 18.
Brain is the chief organ of our body. It controls endocrine function by a special structure. What is the name of it ? How does it control ?
Answer:
Brain controls the endocrine system of our body by a special structure called hypothalamus. Hypothalamus is a small cone shaped structure that projects downward from the brain ending into the pituitary stalk. It interlinks both the nervous system and endocrine system.

A row of small and pointed maxillary teeth is found on the inner region of the upper jaw. In addition vomerine teeth are also present as two groups, one on each side of the internal nostrils. The lower jaw is devoid of teeth. The mouth opens into the buccal cavity that leads to the oesophagus through the pharynx. 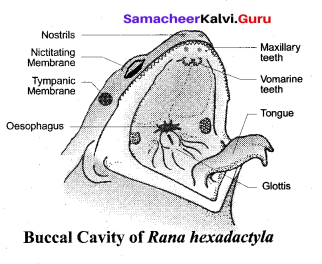 Explain the refractive errors of eye.
Answer:
Refractive errors of eye:
Myopia (near sightedness): The affected person can see the nearby objects but not the distant objects. This condition may result due to an elongated eyeball or thickened lens; so that the image of distant object is formed in front of the yellow spot. This error can be corrected using concave lens that diverge the entering light rays and focuses it on the retina.

Hypermetropia (long sightedness): the affected person can see only the distant objects clearly but not the objects nearby. This condition results due to a shortened eyeball and thin lens; so the image of closest object is converged behind the retina. This defect can be overcome by using convex lens that converge the entering light rays on the retina.

Presbyopia: Due to aging, the lens loses elasticity and the power of accommodation. Convex lenses are used to correct this defect.
Astigmatism is due to the rough (irregular) curvature of cornea or lens. Cylindrical glasses are used to correct this error.
Cataract: Due to the changes in nature of protein, the lens becomes opaque. It can be corrected by surgical procedures. 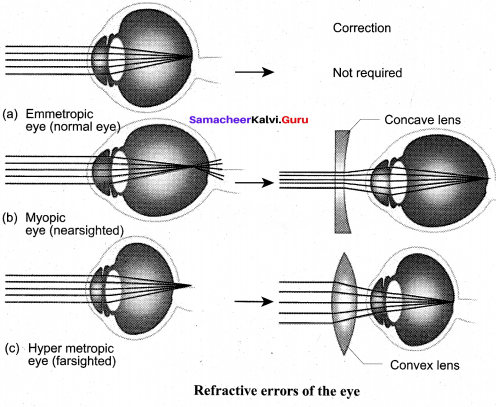 Antidiuretic hormone or Vasopressin: When there is excessive loss of fluid from the body or when there is an increase in the blood pressure, the osmoreceptors of the hypothalamus stimulates the neurohypophysis to secrete the antidiuretic hormone or vasopressin. It facilitates reabsorption of water by increasing the number of aquaporins on the cell surface membrane of the distal convoluted tubule and collecting duct.

When the water loss from the body is less or when you drink excess amount of juice, osmoreceptors stop secreting ADH and the aquaporins of the collecting ducts move into the cytoplasm. Hence dilute urine is produced to maintain the blood volume.

Angiotensin-II stimulates Na+ reabsorption in the proximal convoluted tubule by vasoconstriction of the blood vessels and increases the glomerular blood pressure. Angiotensin-II stimulate adrenal cortex to secrete aldosterone that causes reabsorption of Na+, K+ excretion and absorption of water from the distal convoluted tubule and collecting duct. This increases the glomerular blood pressure and glomerular filtration rate. This complex mechanism is generally known as Renin-Angiotensin-Aldosterone System (RAAS). 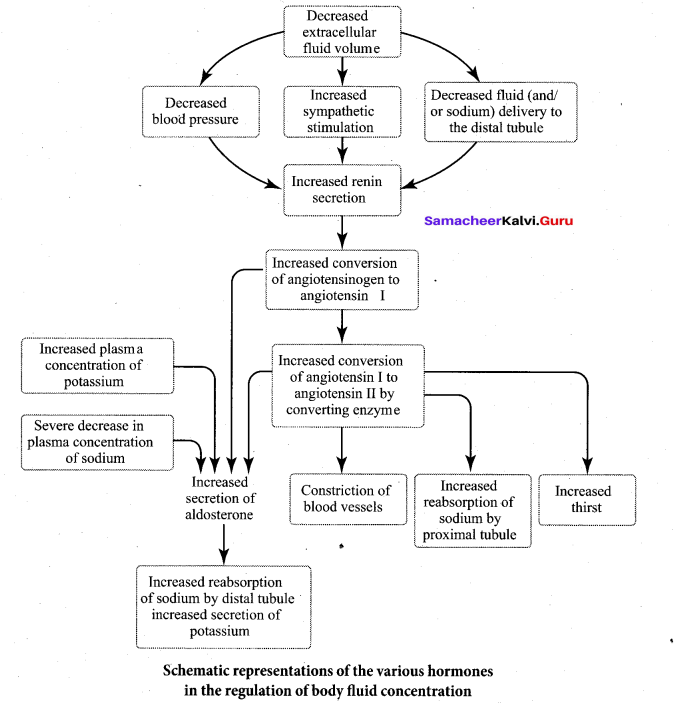 Atrial natriuretic factor: Excessive stretch of cardiac atrial cells cause an increase in blood flow to the atria of the heart and release Atrial Natriuretic Peptide or Factor (ANF). It travels to the kidney where it increases Na+ excretion and increases the blood flow to the glomerulus, acting as vasodilator on the afferent glomerular arterioles and as a vasoconstrictor on efferent arterioles.

It decreases aldosterone release from the adrenal cortex and decreases release of renin, thereby decreasing angiotensin-II. ANF acts antagonistically to the renin-angiotensin system, aldosterone and vasopressin.

Explain, how the combination of aquaculture and hydroponics techniques can be successfully executed in our homes.
Aquaponics is a technique which is a combination of aquaculture (growing fish) and hydroponics (growing plants in non-soil media and nutrient-laden water). Aquaponics may also prevent toxic water runoff. It also maintains ecosystem balance by recycling the waste and excretory products produced by the fish. In India, aquaponics was started in 2013. Some primary methods of aquaponic gardening that are in use nowadays are as follows:

1. Deep water culture is otherwise known as raft based method. In this method a raft floats in water. Plants are kept in the holes of raft and the roots float in water. This method is applicable for larger commercial scale system. By this method fast growing plants are cultivated.

2. Media based method involves growing plants in inert planting media like clay pellets or shales. This method is applicable for home and hobby scale system. Larger number of fruiting plants, leafy green plants, herbs and other varieties of plants can be cultivated.

3. Nutrient Film technique involves the passage of nutrient rich water through a narrow trough or PVC pipe. Plants are kept in the holes of the pipe to allow the roots to be in free contact with in the water stream.

4. Aqua vertica is otherwise known as vertical aquaponics. Plants are stacked on the top of each other in tower systems. Water flows in through the top of the tower. This method is suitable for growing leafy greens, strawberries and other crops that do not need supporting solid substratum to grow.

Advantages of Aquaponic gardening Water conservation: No need of water discharge and recharge as the water is maintained by recycling process.

Soil: Bottom soil may be loaded with freshwater. Microbes in water can convert the waste materials into usable forms like ammonia into nitrates which are used by the plants. Thus the soil fertility is maintained.

Pesticides: In this system use of pesticides is avoided and hence it is ecofriendly.
Weeds: Since the plants are cultured in confined conditions, growth of weeds is completely absent. The utilization of nutrient by plants is high in this method.

Artificial food for fishes: In this system plant waste and decays are utilized by fishes as food. So, the need for the use of supplementary feed can be minimized.

Fertilizer usage: Artificial or chemical fertilizers is not required for this system since the plants in the aquaponics utilize the nutrients from the fish wastes dissolved in water. Cultivable fishes like tilapia, trout, koi, gold fish, bass etc., are cultured in aquaponics. Common cultivable plants like tomato, pepper, lettuce, cucumber, and rose are co-cultivated in this method.