Question 4.
Which of the following represents symport? 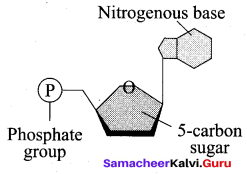 Question 6.
The pairing of Homologous chromosomes on Meiosis is known as …………………..
(a) Disjunction
(b) Synergids
(c) Bivalent
(d) Synapsis
Answer:
(d) Synapsis

Question 9.
(a) What is Plectostele? Give an example.
(b) Mention any one character shared by gymnosperms and angiosperms.
Answer:
(a) Plectostele: Xylem plates alternates with phloem plates, e.g., Lycopodium clavatum.

Question 10.
List the primary ftmctions of Leaf.
Answer:
Primary functions of the leaf:

Question 11.
A series of events leading to the formation of new cell is known as Cell Cycle. Give the diagrammatic view of Cell Cycle.
Answer: 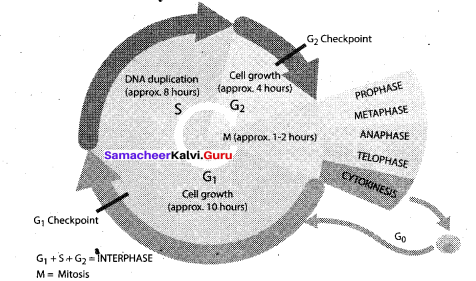 Question 15.
Explain the different types of placentation with example.
Answer: 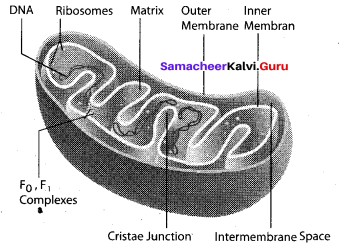 (b) Since huge amount of energy is generated in mitochondria in the form of ATP molecules they are called ‘power house of the cell’.

Question 17.
A transverse section of the trunk of a tree shows concentric rings which are known as growth rings. What are the significances of studying about these rings ?
Answer:

(b) Significances of Pentose Phosphate Pathway:

Question 19.
(a) The equations given below represent the different stages of Nitrogen Cycle in plants.

In the above equations [A], [B], [C] indicate the bacteria which is responsible for the reaction. Name them.
(b) Define Denitrification.
(c) Which enzyme is required for Nitrogen fixation?
Answer:
(a) (i) A – Nitrosomonas
(ii) B – Nitrobacter
(iii) C – Pseudomonas
(b) Denitrification: Nitrates in the soil are converted back into atmospheric nitrogen by a process called denitrification. Bacteria involved in this process are Pseudomonas, Thiobacillus and Bacillus subtilis.

Question 20.
(a) (i) A Danish Physician, Christian Gram developed a staining procedure to differentiate bacteria. List the various steps involved in that procedure.
(ii) Distinguish between Deoxy viruses and Ribo viruses with example.
[OR]
(b) Describe the Floral characters of Allium Cepa with a neat floral diagram.
Answer:
(a) (i) Gram staining Techniques :

Question 21.
(a) (i) Draw and label the internal structure of Nerium leaf
(ii) Name the following Vascular Bundle.
Answer:

(b) (i) Write any four points regarding Physiological effects of cytokinins.
(ii) Define Vernalisation.

In the above representation, what does Pr and Pfr stand for?
Answer:
(a) (i) Internal structure of Nerium leaf: 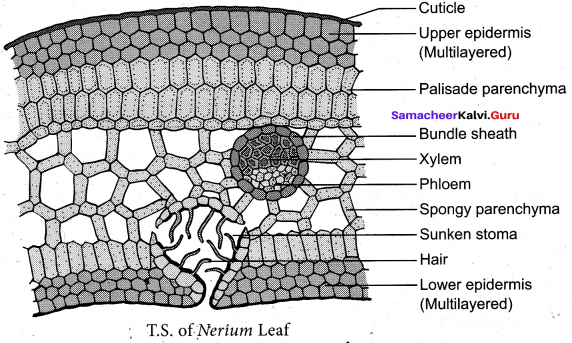 (b) (i) Physiological effects of cytokinins:

(ii) Vernalisation: Many species of biennials and perennials are induced to flower by low temperature exposure (0°C to 5°C). This process is called vernalization. The term vernalization was first used by T.D. Lysenko (1938).

Question 5.
The cytoplasm of the muscle fibre is called …………………….
(a) Myofibril
(b) Sarcoplasm
(c) Sarcomere
(d) Sarcolemma
Answer:
(b) Sarcoplasm

Question 8.
Which of the following is not present in the same rank ?
(a) Diptera
(b) Insecta
(c) Primata
(d) Orthoptera
Answer:
(c) Primata

If the coelom develops within the mesoderm and is lined by mesodermal epithelium it is called eucoelom. The animals which have true coelom are called eucoelomates. If the body cavity is formed by splitting of mesoderm, the animals are called schizocoelomates. e.g., Annelids, arthropods and molluscs. If the body cavity is formed from the mesodermal pouches of archenteron, the animals are called enterocoelomate animals, e.g., echinoderms, hemichordates and chordates.

Question 13.
Do you know your lower limb segments ? Write the 3 segments of lower limb.
Answer:

Question 14.
Name the three zones which are present in Adrenal gland.
Answer: 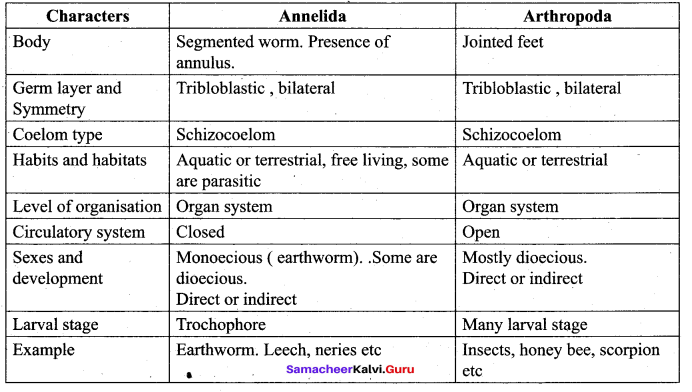 Question 16.
Why do we call cockroach a vector ?
Answer:
Cockroaches carry with them harmful germs of various bacterial diseases like cholera, diarrhoea, tuberculosis, and typhoid and hence are known as “Vectors”.

Question 20.
Write the kingdom, phylum and class for Pigeon. Write the characteristics of birds that are suitable for flying.
Answer:

In our heart, all the four chambers are completely partitioned. It results in non-mixing of oxygenated blood with deoxygenated blood. Explain the double circulation related to it.
Answer:

Discuss the various techniques adopted in cattle breeding.
Answer:
There are two methods of animal breeding, namely inbreeding and outbreeding

1. Inbreeding: Breeding between animals of the same breed for 4-6 generations is called inbreeding. Inbreeding increases homozygosity and exposes the harmful recessive genes. Continuous inbreeding reduces fertility and even productivity, resulting in “inbreeding depression”. This c^n be avoided by breeding selected animals of the breeding population and they should be mated with superior animals of the same breed but unrelated to the
breeding population. It helps to restore fertility and yield.

Out crossing: It is the breeding between unrelated animals of the same breed but having no common ancestry. The offspring of such a cross is called outcross. This method is suitable for breeding animals below average in productivity.

Cross breeding: Breeding between a superior male of one breed with a superior female of another breed. The cross bred progeny has superior traitsfhybrid vigour or heterosis.)

Interspecific hybridization: In this method of breeding mating is between male and female of two different species. The progeny obtained from such crosses are different from their parents, and may possess the desirable traits of the parents. Have you heard about Mule? It was produced by the process of interspecific hybridization between a male donkey and a female horse.

4. Multiple ovulation embryo transfer technology (MOET) : It is another method of propagation of animals with desirable traits. This method is applied when the success rate of crossing is low even after artificial insemination. In this method Follicle stimulating hormone (FSH) is administered to cows for inducing follicular maturation and super ovulation. Instead of one egg per cycle, 6-8 eggs can be produced by this technology.