Answer all the Questions. [15 x 1 = 15]
Choose the most appropriate answers from the given alternatives and write the option code and corresponding answer.

Question 5.
When CaC2 is heated in atmospheric nitrogen in an electric furnace, the compound formed is
(a) Ca(CN)2
(b) CaNCN
(c) CaC2N2
(d) CaNC2
Answer:

Question 7.
Among the following statements, which on is/are correct?
(i) During cyclic process the amount of heat absorbed by the surrounding is equal to work done on the surrounding.
(ii) Refractive index is an example for intensive property.
(iii) If the enthalpy change of a process is positive then the process is spontaneous.
(iv) The entropy of an isolated system increases during spontaneous process.
(a) (i), (ii), (iii)
(b) (i), (iv)
(c) (ii), (iv)
(d) (ii) only
Answer:
(d) (ii) only

Question 16.
What is syngas? How it is prepared?
Answer:
The mixture of CO and H2 gases are called syngas.
Preparation: C + H2O → CO + H2

Question 17.
Write any two similarities between beryllium and aluminum.
(i) Beryllium and aluminium have same electronegativity values.
(ii) BeCl2 and A1C13 forms dimeric structure. Both are soluble in organic solvents and are strong Lewis acids.

Question 21.
How do you detect the presence of nitrogen and sulphur together in an organic compound?
Answer:
If both N and S are present, a blood-red colour is obtained due to the following reactions

Question 23.
What is Green chemistry?
Answer:

Question 25.
What do you understand by the term mole?
Answer:
The mole is defined as the amount of a substance which contains 6.023 x 1023 particles such as atoms, molecules or ions. It is represented by the symbol “n”.

Question 26.
Ionisation potential of nitrogen is greater than that of oxygen. Explain by giving appropriate reason.
Answer:
N (Z = 7) Is2 2s2 2px1 2py1 2pz1. It has exactly half filled electronic configuration and it is more stable. Due to stability, ionization energy of nitrogen is high.

Question 28.
Derive ideal gas equation.
Answer:
The gaseous state is described completely using the following four variables T, P, V and n. Each gas law relates one variable of a gaseous sample to another while the other two variables are held constant.

Therefore, combining all equations into a single equation will enable to account for the change in any or all of the variables.

The above equation can be rearranged to give PV = nRT – Ideal gas equation. Where, R is also known as Universal gas constant.

Question 29.
Define molar heat capacity. Give its unit.
Answer:
Molar heat capacity is defined as “the amount of heat absorbed by one mole of a substance in raising the temperature by 1 Kelvin”. It is denoted as Cm.

Question 31.
Explain a suitable method for purifying and separating liquids present in a mixture having very close boiling point.
Answer:
Fractional distillation: This method is used to purify and separate liquids present in the mixture having their boiling-point close to each other. The process of separation of the components in liquid mixture at their respective boiling points in the form of vapours and the subsequent condensation of those vapours is called fractional distillation. This method is applied in distillation of petroleum, coal tar and crude oil.

Question 32.
What is polymerisation? Explain the two types of polymerisation reaction of acetylene.
ANswer:
A polymer is a large molecule formed by the combination of large number of small molecules (monomers). This process is known as polymerisation.

Acetylene undergoes two types of polymerisation reactions, they are:

(i) Linear polymerisation: Acetylene forms linear polymer, when passed into a solution of cuprous chloride and ammonium chloride.

Question 33.
The bond length between all the four carbon atoms is same in 1,3 – butadine. Explain with reason.
Answer:

1,3-butadiene is a conjugated molecule with four overlapping p-orbital on adjacent atoms. And π-electrons are delocalised over four atoms. This shortens the bond length of central C – C bond. Thus, the bond length between all the four C-atoms are same in 1,3-butadiene.

Question 34.
(a) (i) What are auto redox reactions? Give example.
(ii) Define orbital. What are the n and 1 values of 3px and 4dx2-y2 electron?
[OR]
(b) (i) Why hydrogen peroxide is stored in plastic containers, not in glass container?
(ii) Give the general electronic configuration of lanthanides and actinides.
Answer:
(a) (i) Auto redox reactions: It is a redox reaction in which a substance act as both the oxidizing agent and the reducing agent. (Reaction occur in the same substance)

(b) (i) Derive the relation between KP and Kc for general homogeneous gaseous reaction.
(ii) How do you measure heat changes of a constant pressure?
Answer:
(a) (i) M + (x + y)NH3 → [M(NH3)x]+ + [e(NH3)y]–
The blue colour of the solution is due to the ammoniated electron which absorbs energy in the visible region of light and thus imparts blue colour to the solution. The solutions are paramagnetic and on standing slowly liberate hydrogen resulting in the formation of amide. In concentrated solution, the blue colour changes to bronze colour and become diamagnetic.

(b) (i) Consider a generaL reaction in which all reactants and products arc ideal gases.

On substitution in equation (2),

(ii) 1. Measurement of heat change at constant pressure can be done in a coffee cup calorimeter.
2. We know that ΔH = qp (at constant P) and therefore, heat absorbed or evolved, qp at constant pressure is also called the heat of reaction or enthalpy of reaction, ΔHr.
3. In an exothermic reaction, heat is evolved, and system loses heat to the surroundings. Therefore, qp will be negative and Reaction AH. will also be negative. Mixture
4. Similarly in an endothermic reaction, heat is absorbed, qp is positive and ΔHr will also be positive. 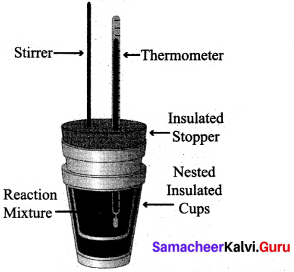 Question 36.
(a) (i) Draw the M.O. diagram of oxygen molecule. Calculate its bond order and magnetic character.
(ii) Draw and explain the graph obtained by plotting solubility versus temperature for calcium chloride.

(b) (i) Write the IUPAC names of the following compunds: 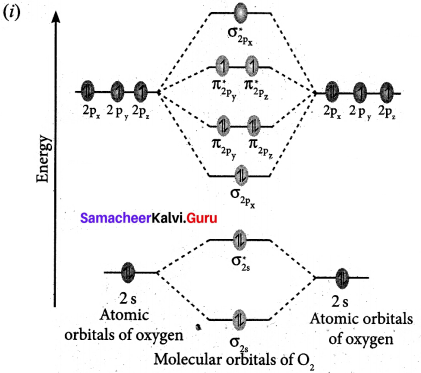 (ii) Even though the dissolution Of calcium chloride is exothermic, the solubility increases moderately with increase in temperature. Here, the entropy factor also plays a significant role in deciding the position of the equilibrium. 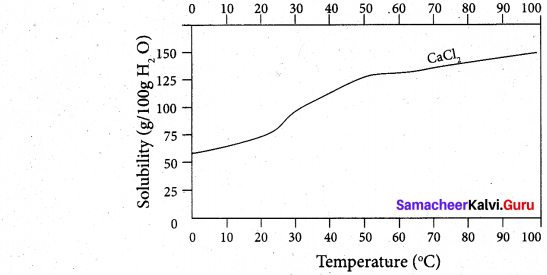 Question 37.
(a) (i) Explain about the inductive effect.
(ii) What do you mean by confirmation? Explain about staggered conformation in ethane.

(b) (i) Among the following compounds, o-dichloro benzene and p-dichloro benzene, which has higher melting point? Explain with reason.
(ii) Write notes on the adverse effect caused by ozone depletion.
Answer:
(a) (i) Inductive effect:
1. It is defined as the change in the polarization of a covalent bond due to the presence of adjacent bonded atoms or groups in the molecule. It is denoted as I-effect.
2. Atoms or groups which lose electron towards a carbon atom are said to have a +1 effect.
Example, CH3 —, (CH3)2 CH —, (CH3)2 C— etc.
3. Atoms or groups which draw electrons away from a carbon atom are said to have a -I effect.
Example, —NO2. -I, Br, -OH, C6H5 etc.
4. For example, consider ethane and ethyl chloride. The C—C bond in ethane is non¬polar while the C-C bond in ethyl chloride is polar. We know that chlorine is more electronegative than carbon and hence it attracts the shared pair of electrons between C—Cl in ethyl chloride towards itself.

This develops a slight negative charge on chlorine and a slight positive charge on carbon to which chlorine is attached. To compensate it, the C1 draws the shared pair of electron between itself and C2. This polarization effect is called inductive effect.

Staggered conformation: In this conformation, the hydrogens of both the carbon atoms are far apart from each other. The repulsion between the atoms is minimum and it is the most stable conformer.

(ii) 1. The formation and destruction of ozone is a regular natural process, which never disturbs the equilibrium level of ozone in the stratosphere. Any change in the equilibrium level of ozone in the atmosphere will adversely affect the life in biosphere in the following ways.
2. Depletion of ozone layer will allow more UV rays to reach the earth surface and would cause skin cancer and also decreases the immunity level in human beings.
3. UV radiations affects plant proteins which lead to harmful mutation in plant cells.
4. UV radiations affect the growth of phytoplankton and as a result ocean food chain is disturbed and it even damages the fish productivity. 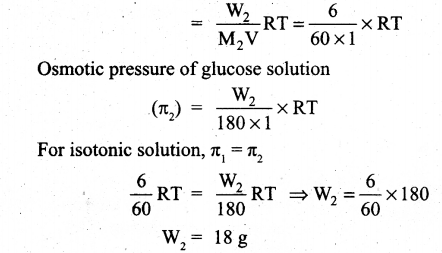 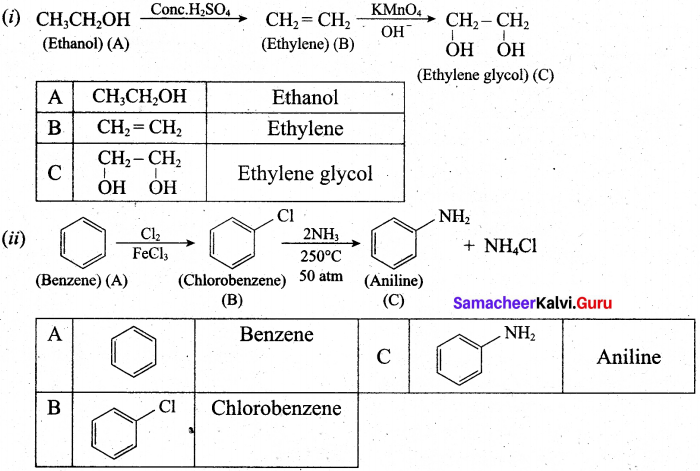