Question 4.
Which factor is called the changing agent of the society?
(a) Organizer
(b) Capital
(c) Labour
(d) Land
Answer:
(a) Organizer

Question 5.
Which of the following is not a characteristic of land?
(a) Heterogeneous
(b) Gift of Nature
(c) Its limited supply
(d) It is mobile
Answer:
(d) It is mobile 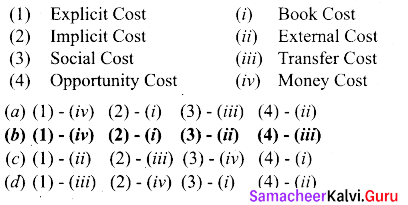 Question 10.
Identify the wrong statement about the features of Duopoly.
(a) There is product differentiation.
(b) They fix the price for their product to maximise their profit.
(c) Each seller is fully aware of his rival’s motive and actions.
(d) Both sellers may collude regarding the sale of commodity.
Answer:
(a) There is product differentiation.

Question 11.
“Wages is a sum of money paid under contract by an employer to a worker for the services rendered.” – Who said this statement?
(a) Walker
(b) Marshall
(c) Ricardo
(d) Benham
Answer:
(d) Benham

Question 12.
The first Wi-Fi facility was provided by Indian Railways in
(a) Bengaluru
(b) Chennai
(c) Delhi
(d) Mumbai
Answer:
(a) Bengaluru

Question 18.
______ are set up with a view to develop rural economy by providing credit and other facilities to small and marginal farmers.
(a) MUDRA Bank
(b) RRB
(c) SHG
(d) NABARD
Answer:
(b) RRB

Question 22.
What is meant by Sunk Cost?
Answer:
A cost incurred in the past and cannot be recovered in future is called as Sunk Cost. This is historical but irrelevant for future business decisions. It is called as sunk because, they are unalterable, unrecoverable and if once invested it should be treated as drowned or disappeared.

Question 24.
What is NITI Aayog? What are its functions?
Answer:

Question 26.
Define disinvestment.
Answer:
Disinvestment means selling of government securities of Public Sector Undertakings [PSUs] to other PSUs or Private Sectors or banks. This process has not been fully implemented.

Question 28.
What is crop insurance?
Answer:}
Agriculture in India is highly prone to risks like droughts and floods. It is necessary to protect the farmers from natural calamities and ensure their credit eligibility for the next season.

For this purpose, the Government of India introduced many agricultural schemes throughout the country. The Pradhan Mantri Fasal Bima Yojana (Prime Minister’s Crop Insurance Scheme) was launched on 18 February 2016.

Question 31.
What are the differences between micro-economics and macro-economics.
Answer:
Micro Economics:

Question 32.
Describe the features of human wants.
Answer:
(a) Wants are unlimited:
Human wants are countless in number and various in kinds. When one want is satisfied another want crops up. Human wants multiply with the growth of civilization and development.

(c) Wants are Satiable:
Though we cannot satisfy all our wants, at the same time we can satisfy particular wants at a given time. When one feels hungry, he takes food and that want is satisfied.

(d) Wants are Alternative:
There are alternative ways to satisfy a particular want. E.g., Idly, dosa or chappathi.

(e) Wants are Competitive:
All our wants are not equally important. So, there is competition among wants. Hence, we have to choose more urgent wants than less urgent wants.

(f) Wants are Complementary:
Sometimes, satisfaction of a particular want requires the use of more than one commodity. Example: Car and Petrol, Ink and Pen.

(g) Wants are Recurring:
Some wants occur again and again. For example, if we feel hungry, we take food and satisfy out want. But after sometime, we again feel hungry and want food.

Question 33.
Find out the missing Marginal Product and Average Product for the given table.

Mineral resources:
Tamil Nadu has a few mining projects based on Titanium, Lignite, Magnesite, Graphite, Limestone, Granite and Bauxite. The first one is the Neyveli Lignite Corporation that has led development of large industrial complex around Neyveli in Cuddalore district with thermal power plants, Fertilizer and Carbonisation plants.

Magnesite mining is at Salem from which mining of Bauxite ores are carried out at Yercaud and this region is also rich in Iron Ore at Kanjamalai. Molybdenum is found in Karadikuttam in Madurai district.

Question 37.
List out the objectives of MUDRA BANK.
Answer:

Question 41.
(a) Explain basic problems of the economy with the help of Production Possibility Curve.
Answer:
Production possibility curve shows the menu of choice along which a society can choose to substitute one good for another assuming a given state of technology and given total resources. 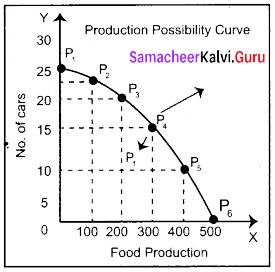 (b) Explain the public transport system in Tamil Nadu.
Answer:
Tamil Nadu has a well established transportation system that connects all parts of the State. This is partly responsible for the investment in the State. Tamil Nadu is served by an extensive road network in terms of its spread and quality, providing links between urban centres, agricultural market-places and rural habitations in the countryside. However, there is scope for improvement.

Question 42.
(a) Explain the law of demand with a diagram.
Answer:
Definition:
According to Alfred Marshall, the Law of Demand said as “the quantity demanded increases with a fall in price and diminishes with a rise in price”.

Assumptions of Law of Demand: 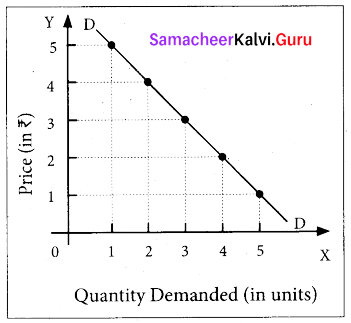 Conclusion:
Therefore, the law of demand states that there is an inverse relationship between the price and the quantity demanded of a commodity.

(b) Illustrate the Ricardian theory of Rent.
Answer:
Definition:
According to Ricardo, “Rent is the that portion of the produce of the earth which is paid to the landlord for the use of the original and indestructible powers of the soil”.

Schedule of Ricardian Theory of Rent: 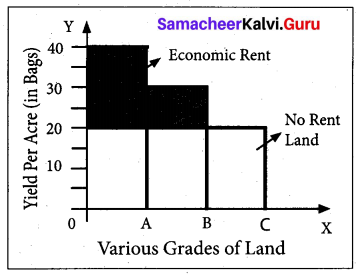 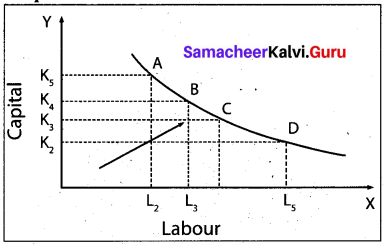 1. The iso-quant curve has negative slope.
It slopes downwards from left to right indicating that the factors are substitutable. If more of one factor is used, less of the other factor is needed for producing the same level of output. In the diagram combination A refers to more of capital K5 and less of labour L2. As the producer moves to B, C, and D, more labour and less capital are used.

2. Convex to the origin.
This explains the concept of diminishing Marginal Rate of Technical Substitution (MRTSLK). For example, the capital substituted by 1 unit of labour goes on decreasing when moved from top to bottom. If so, it is called diminishing MRTS. Constant MRTS (straight line) and increasing MRTS (concave) are also possible. It depends on the nature of iso-quant curve.

3. Non inter-section of Iso-quant curves.
For instance, point A lie on the isoquants IQ1 and IQ2. But the point C shows a higher output and the point B shows a lower level of output IQ1.
If C = A, B = A, then C = B. But C > B which is illogical. 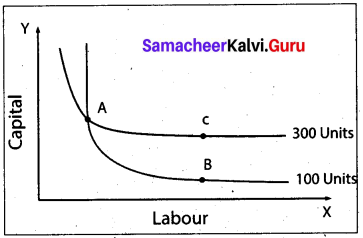 The arrow in the figure shows an increase in the output with a right and upward shift of an iso-quant curve. 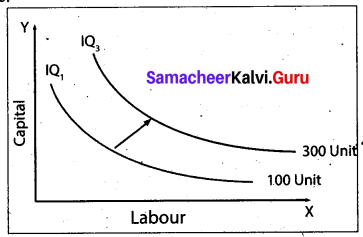 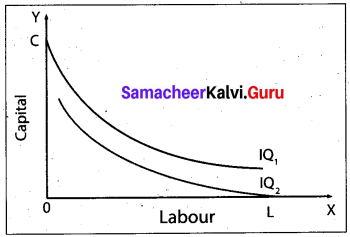 (b) Explain about the Industry clusters in Tamil Nadu
Answer:

Constant AR and MR (at Fixed Price):
When price remains constant or fixed, the MR will be also constant and will coincide with AR. Under perfect competition as the price is uniform and fixed, AR is equal to MR and their shape will be a straight line horizontal to X axis. The AR and MR Schedule under constant price is given in the below table and in the diagram. 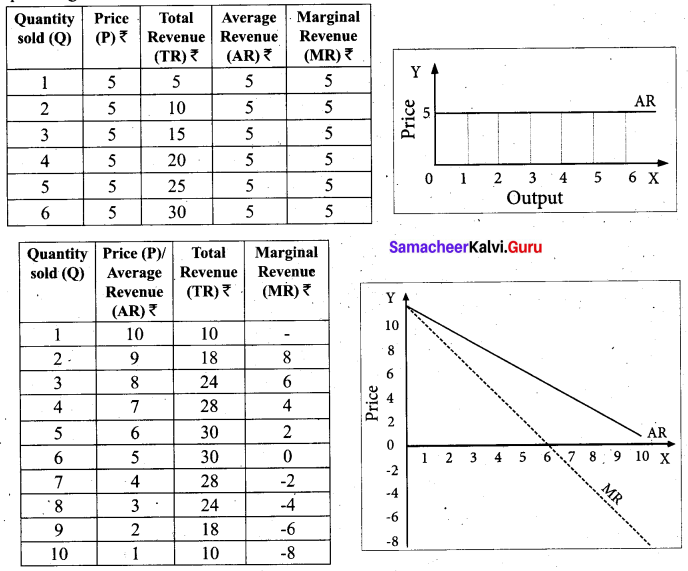 Declining AR and MR (at Declining Price):
When a firm sells large quantities at lower prices both AR and MR will fall but the fall in MR will be more steeper than the fall in the AR.

It is to be noted that MR will be lower than AR. Both AR and MR will be sloping downwards straight from left to right. The MR curve divides the distance between AR Curve and Y axis into two equal parts. The decline in AR need not be a straight line or linear. If the prices are declining with the increase in quantity sold, the AR can be non-linear, taking a shape of concave or convex to the origin. 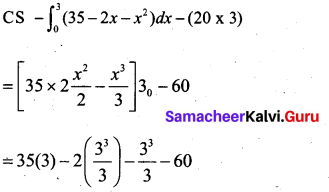 Question 45.
(a) Explain the features of Oligopoly.
Answer:

(b) Write a brief note on the Gandhian economic ideas.
Answer:
1. Village Republics:
To Gandhi, India lives in villages. He was interestred in developing the villages j as self sufficient units. He opposed extensive use of machinery, urbanization and industrialization.

2. On Machinery:
Gandhi described machinery as “Great Sin’. He said that “Books could be written to demonstrate the evils it is necessary to realize that machinery is bad. Instead of welcoming machinery as a boon, we should look upon it as an evil. It would ultimately crease.

4. Decentralization:
He advocated a decentralized economy, i.e., production at a large number of places on a small scale or production in the people’s homes.

5. Villge Sarvodaya:
According to Gandhi, “Real India was to be found in villages and not in towns or cities. So he suggested the development of self sufficient, self-dependent villages.

6. Bread Labour:
Gandhi realized the dignity of human labour. He believed that God created man to eat his bread by sweat of his brow. Bread labour or body labour was the expression that Gandhi used to mean manual labour.

7. The Dcotrine of Trusteeship:
Trusteeship provides a means of transforming the present capitalist order of society into an egalitarian one. It gives no quarter to capitalism. However, now India experiences * S both casino capitalism and crony capitalsm.

8. On the Food Problem:
Gandhi was against any sort of food controls. He thought Such controls only created artificial scarcity. Once India was begging for food grain, but India tops the world with very large production of foodgrains, fruits, vegetables, milk, egg, meat etc.

9. On population:
Gandhi opposed the method of population control through contraceptives. He was, however, in favour of birth control as a sovereign remedy to the problem of over population.

10. On Prohibition:
Gandhi advocated cent per cent prohibition. He regarded the use of liquor as a disease rather than a vice. He felt that it was better for India to be poor than to have thousands of drunkards. But, now many states depend on revenue from liquor sales.

After New Economic Policy 1991, the Indian banking Industry has been facing the new horizons of competitions, efficiency and productivity.

THE EVALUATION OF ICT HAS FIVE PHASES.
They are evolution in

In Economics, the uses of mathematical and statistical tools need the support of ICT for data compiling, editing, manipulating and presenting the results. In general, SPSS and Excel packages are often used by researchers in economics. Such Software is designed to do certain user tasks. Word process, spread sheet and web browser are some of the examples which are frequently used while undertaking analysis in the study of economics.

Question 47.
(a) Explain the objectives and characteristics of Special Economic Zones (SEZ).
Answer: