Question 3.
The process in which heat transfer is by actual movement of molecules in fluids such as liquids and gases is called ________
(a) Thermal conductivity
(b) Convection
(c) Conduction
(d) Radiation
Answer:
(b) Convection

Question 4.
If the temperature of the wire is increased, then Young’s Modules will
(a) increase rapidly
(b) increase by a very small amount
(c) remain the same
(d) decrease
Answer:
(d) decrease

Question 6.
There is a small bubble at one end and a bigger bubble at another end of a pipe. Which among the following will happen?

Question 7.
A closed cylindrical container is partially filled with water. As the container rotates in a horizontal plane above a perpendicular bisector, its moment of inertia :
(a) remains constant
(b) depends on the direction of rotation
(c) increases
(d) decreases
Answer:
(c) increases 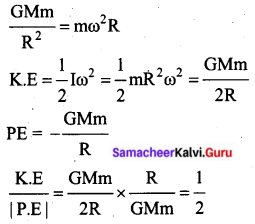 Question 17.
What is a projectile? Give two examples.
Answer:
Projectile: When an object is thrown in the air with some initial velocity and then allowed to move under the action of gravity alone, the object is known as a projectile.
Example:

Question 18.
State Newton’s Second Law of Motion.
Answer:
The force acting on an object is equal to the rate of change of its momentum
\(\overrightarrow{\mathrm{F}}=\frac{d \vec{p}}{d t}\)

Question 21.
State Stefan-Boltzmann law and write its expression.
Answer:
Stefan Boltzmann law states that the total amount of heat radiated per second per unit area of a black body is directly proportional to the fourth power of its absolute temperature.
E ∝ T4 (or) E = σT4

Question 23.
“Soldiers are not allowed to march on a bridge.” Give reason.
Answer:
While crossing a bridge, if the period of stepping on the ground by marching soldiers be equal to the natural frequency of the bridge, it may be thrown into resonance vibration and the vibrations may be so large that the bridge may collapse. Thus to avoid resonant vibration of the bridge. Soldiers are ordered to break steps. 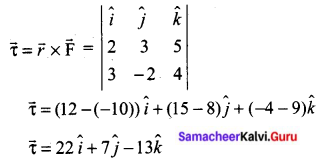 Question 26.
What are the various types of friction? Suggest a few methods to reduce friction.
Answer:
There are two types of Friction:
(i) Static Friction: Static friction is the force which opposes the initiation of motion of an object on the surface. The magnitude of static frictional force fs lies between \(0 \leq f_{s} \leq \mu_{s} N\)
where, µs — coefficient of static friction
N — Normal force
(ii) Kinetic friction: The frictional force exerted by the surface when an object slides is called kinetic friction. Also called as sliding friction or dynamic friction,
fk = µkN
where µk — the coefficient of kinetic friction
N — Normal force exerted by the surface on the object
Methods to reduce friction: Friction can be reduced 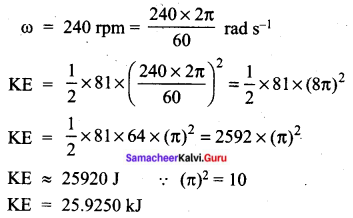 Question 29.
What do you mean by the term weightlessness? Explain the state of weightlessness of a freely falling body.
Answer:
When a man is standing in the elevator, there are two forces acting on him.
1. The gravitational force acts downward. If we take the vertical direction as positive y-direction, the gravitational force acting on the man is \(\overrightarrow{\mathrm{F}}_{\mathrm{G}}=-m g \hat{j}\)
2. The normal force exerted by the floor on the man which acts vertically upward, \(\overrightarrow{\mathrm{N}}=\mathrm{N} \hat{j}\)
The weightlessness of freely falling bodies: Freely falling objects experience only gravitational force. As they fall freely, they are not in contact with any surface (by neglecting air friction). The normal force acting on the object is zero. The downward acceleration is equal to the acceleration due to the gravity of the Earth, i.e., (a = g)
Newton’s 2nd law acting on the man N = m(g – a)
a = g
∴ N = w(g – g) = 0

Question 30.
Derive the expression for the terminal velocity of a sphere falling through a viscous liquid.
Answer:
The expression for terminal velocity: Consider a sphere of radius r which falls freely through a highly viscous liquid of coefficient of viscosity η. Let the density of the material of the sphere be ρ and the density of the fluid be σ.
The gravitational force acting on the sphere, 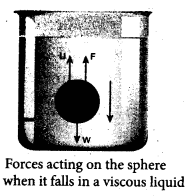 Here, it should be noted that the terminal speed of the sphere is directly proportional to the square of its radius. If σ is greater than ρ, then the term (ρ – σ) becomes negative leading to a negative terminal velocity.

Question 31.
Explain the linear expansion of solid.
Answer:
Linear Expansion: In solids, for a small change in temperature
ΔT, the fractional change in length to \(\left(\frac{\Delta L}{L_{0}}\right)\) is directly proportional to ΔT. 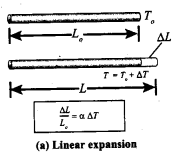 Question 32.
Write down any six postulates of the kinetic theory of gases.
Answer: 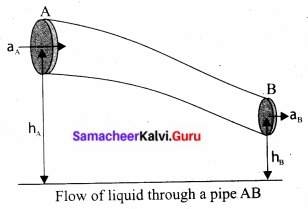 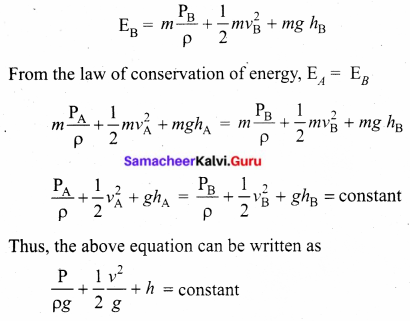 The above equation is the consequence of the conservation of energy which is true until there is no loss of energy due to friction. But in practice, some energy is lost due to friction. This arises due to the fact that in a fluid flow, the layers flowing with different velocities exert frictional forces on each other. This loss of energy is generally converted into heat energy. Therefore, Bernoulli’s relation is strictly valid for fluids with zero viscosity or non-viscous liquids. Notice that when the liquid flows through a horizontal ‘ pipe, then
\(h=0 \Rightarrow \frac{\mathrm{P}}{\rho g}+\frac{1}{2} \frac{v^{2}}{g}=\text { constant }\) 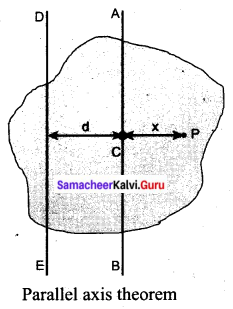 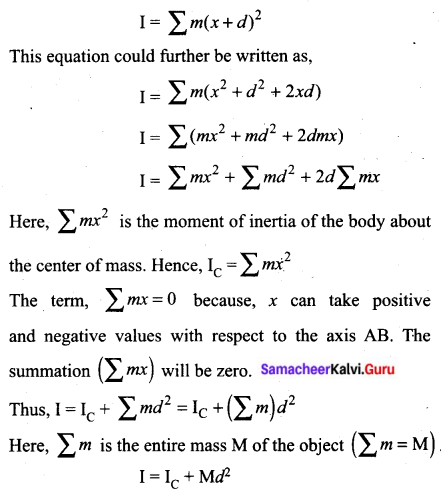 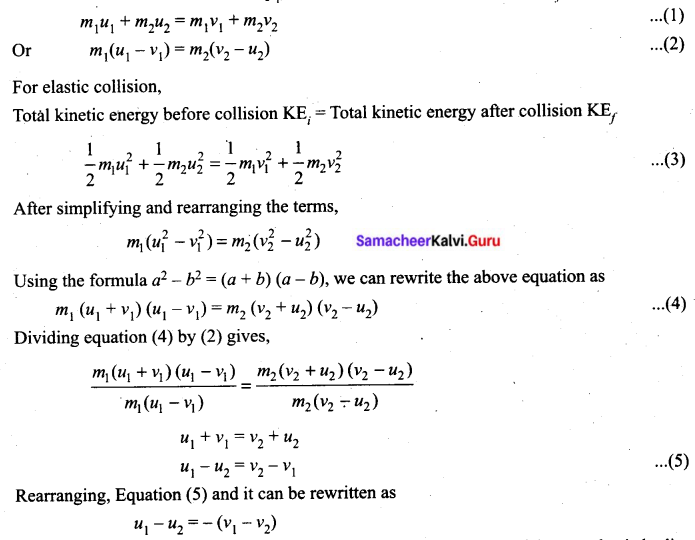 This means that for any elastic head-on collision, the relative speed of the two elastic bodies after the collision has the same magnitude as before collision but in opposite direction. Further note that this result is independent of mass.
Rewriting the above equation for v1 and v2,
v1 = v12 + u2 – u1 ……… (6)
(or) v2 = u1 + v1 – u2 ……. (7)
To find the final velocities v1 and v2:
Substituting equation (7) in equation (2) gives the velocity of m1 as 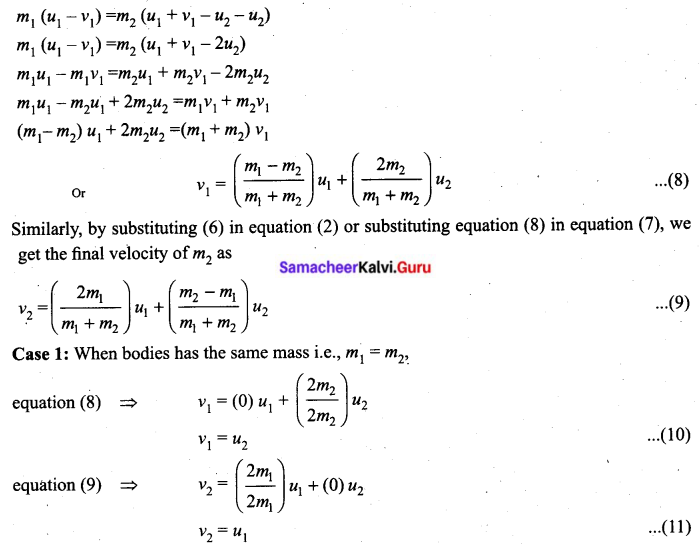 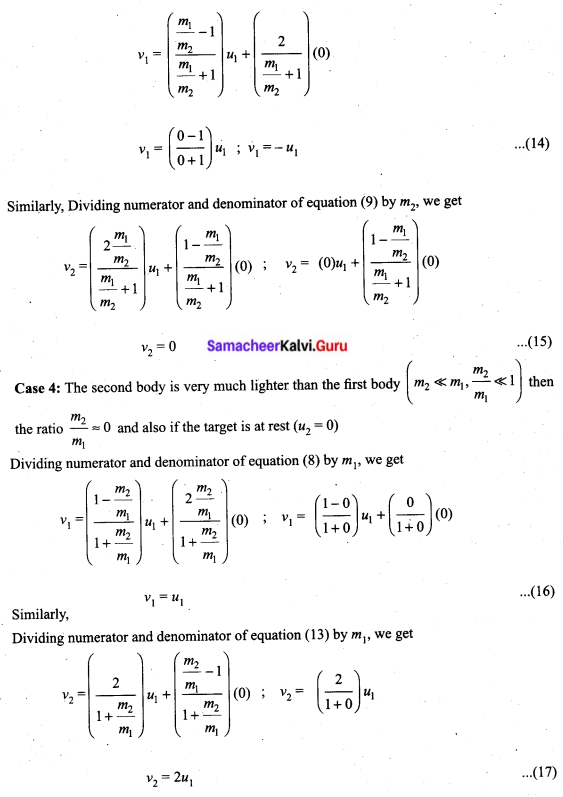 [OR]
Question 36(b).
How will you determine the velocity of sound using resonance air column apparatus?
Answer:
Resonance air column apparatus: The resonance air column apparatus and first, second and third resonance The resonance air column apparatus is one of the simplest techniques to measure the speed of sound in air at room temperature. It consists of a cylindrical glass tube of one-meter length whose one end A is open and another end B is connected to the water reservoir R through a rubber tube as shown in the figure. This cylindrical glass tube is mounted on a vertical stand with a scale attached to it. The tube is partially filled with water and the water level can be adjusted by raising or lowering the water in the reservoir R. The surface of the water will act as a closed-end and other as the open end. Therefore, it behaves like a closed organ pipe, forming nodes at the surface of water and antinodes at the closed end. When a vibrating tuning fork is brought near the open end of the tube, longitudinal waves are formed inside the air column. These waves move downward as shown in Figure, and reach the surfaces of water and get reflected and produce standing waves.

Question 37(a).
Derive Mayer’s relation for an ideal gas.
Answer:
Mayer’s relation: Consider µ mole of an ideal gas in a container with volume V, pressure P and temperature T.
When the gas is heated at the constant volume the temperature increases by dT. As no work is done by the gas, the heat that flows into the system will increase only the internal energy. Let the change in internal energy be dU.
If Cv is the molar specific heat capacity at constant volume, from the equation.
\(C_{V}=\frac{1}{\mu} \frac{d U}{d T}\) ………. (1)
dU = µCVdT ……. (2)
Suppose the gas is heated at constant pressure so that the temperature increases by dT. If ‘Q’ is the heat supplied in this process and ‘dV’ the change in volume of the gas.
Q = µCPdT …….(3)
If W is the workdone by the gas in this process, then
W = PdV …….. (4)
But from the first law of thermodynamics,
Q = dU + W ……….(5)
Substituting equations (2), (3) and (4) in (5), we get,
µCPdT = µCVdT + PdV
For mole of ideal gas, the equation of state is given by .
PV = µRT ⇒ PdV + VdP = µRdT
Since the pressure is constant, dP = 0
CPdT = CVdT +RdT
CP = CV + R (or) CP – CV = R ……(6)
This relation is called Mayer’s relation It implies that the molar specific heat capacity of an ideal gas at constant pressure is greater than molar specific heat capacity at constant volume. The relation shows that specific heat at constant pressure (sP) is always greater than specific heat at constant volume (sV).
[OR]
Question 37(b).
Explain the horizontal oscillations of a spring.
Answer:
Horizontal oscillations of a spring-mass system: Consider a system containing a block of mass m attached to a massless spring with stiffness constant or force constant or spring constant it placed on a smooth horizontal surface (frictionless surface) as shown in the figure. Let x0 be the equilibrium position or mean position of mass m when it is left undisturbed. Suppose the mass is displaced through a small displacement x towards right from its equilibrium position and then released, it will oscillate back and forth about its mean position x0. Let F be the restoring force (due to stretching of the spring) which is proportional to the amount of displacement of the block. For one dimensional motion, mathematically, we have
F ∝ x
F = -kx ….. (1)
where negative sign implies that the restoring force will always act opposite to the direction of the displacement. This equation is called Hooke’s law. Notice that, the restoring force is linear with the displacement (i.e., the exponent of force and displacement are unity). This is not always true; in case if we apply a very large stretching force, then the amplitude of oscillations becomes very large (which means, force is proportional to displacement containing higher powers of x) and therefore, the oscillation of the system is not linear and hence, it is called non-linear oscillation. We restrict ourselves only to linear oscillations throughout our discussions, which means Hooke’s law is valid (force and displacement have a linear relationship).
From Newton’s second law, we can write the equation for the particle executing simple harmonic motion
\(m \frac{d^{2} x}{d t^{2}}=-k x\) …….. (1)
\(\frac{d^{2} x}{d t^{2}}=-\frac{k}{m} x\) ……. (2)
Comparing the equation with simple harmonic motion equation, we get
\(\omega^{2}=\frac{k}{m}\) ……. (3)
which means the angular frequency or natural frequency of the oscillator is
\(\omega=\sqrt{\frac{k}{m}} \mathrm{rad} \mathrm{s}^{-1}\) ……. (4)
The frequency of the oscillation is
\(f=\frac{\omega}{2 \pi}=\frac{1}{2 \pi} \sqrt{\frac{k}{m}} \text { Hertz }\) …… (5)
and the time period of the oscillation is
\(\mathrm{T}=\frac{1}{f}=2 \pi \sqrt{\frac{m}{k}} \text { seconds }\) ……. (6) 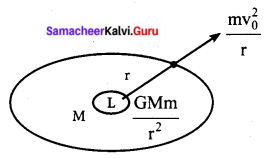 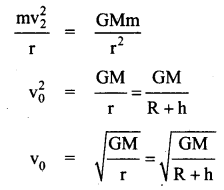