Question 9.
Write the origin and area of cultivation of green gram and red gram.
Answer:

Question 15.
List out the objectives of plant breeding.
Answer:

Question 16.
Spindle shaped pyramid of number is noticed in forest ecosystem. Give Reasons.
Answer:
In a forest ecosystem the pyramid of number is spindle in shape, it is because the base (T1) of the pyramid occupies large sized trees (Producer) which are lesser in number. Herbivores (T2) (Fruit eating birds, elephant and deer) occupying second trophic level, are more in number than the producers. In final trophic level (T4), tertiary consumers (lion) are lesser in number than the secondary consumer (T3) (fox and snake). 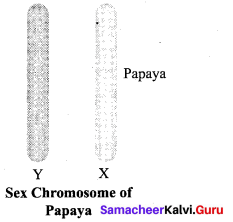 Later these seeds are grown in vitro medium and converted into piantiets. These piantiets require a hardening period (either green house or hardening chamber) and then shifted to normal environment condition.

But in the reciprocal cross the F1 plant differs from each other. In each cross, the F1 plant reveals the character of the plant which is used as female plant.

This inheritance is not through nuclear gene. It is due to the chloroplast gene found in the ovum of the female plant which contributes the cytoplasm during fertilization since the male gamete contribute only the nucleus but not cytoplasm.

(b) Explain in detail about various types of direct gene transfer method.
Answer: (2) Microinjection: The DNA is directly injected into the nucleus using Electroporation Methods of Gene Transfer fine tipped glass needle or micro pipette to transform plant cells. The protoplasts are immobilised on a solid support (agarose on a microscopic slide) or held with a holding pipette under suction.

(3) Electroporation Methods of Gene Transfer: A pulse of high voltage is applied to protoplasts, cells or tissues which makes transient pores in the plasma membrane through which uptake of foreign DNA occurs.

(4) Liposome mediated method of Gene Transfer: Liposomes the artificial phospholipid vesicles are useful in gene transfer. The gene or DNA is transferred from liposome into vacuole of plant cells. It is carried out by encapsulated DNA into the vacuole. This technique is advantageous because the liposome protects the introduced DNA from being damaged by the acidic pH and protease enzymes present in the vacuole. Liposome and tonoplast of vacuole fusion resulted in gene transfer. This process is called lipofection.

(5) Biolistics: The foreign DNA is coated onto the surface of minute gold or tungsten particles (1-3 mm) and bombarded onto the target tissue or cells using a particle gun (also called as gene gun/micro projectile gun/shotgun). Then the bombarded cells or tissues are cultured on selected medium to regenerate plants from the transformed cells.

(1) Isolation of protoplast: Small bits of plant tissue like leaf tissue are used for isolation of protoplast. The leaf tissue is immersed in 0.5% Macrozyme and 2% Onozuka cellulase enzymes dissolved in 13% sorbitol or mannitol at pH 5.4. It is then incubated over-night at 25°C. After a gentle teasing of cells, protoplasts are obtained, and these are then transferred to 20% sucrose solution to retain their viability. They are then centrifuged to get pure protoplasts as different from debris of cell walls.

(2) Fusion of protoplast: It is done through the use of a suitable fusogen. This is normally PEG (Polyethylene Glycol). The isolated protoplast are incubated in 25 to 30% concentration of PEG with Ca++ ions and the protoplast shows agglutination (the formation of clumps of cells) and fusion.

(3) Culture of protoplast: MS liquid medium is used with some modification in droplet, plating or micro-drop array techniques. Protoplast viability is tested with fluorescein diacetate before the culture. The cultures are incubated in continuous light 1000-2000 lux at 25 °C. The cell wall formation occurs within 24-48 hours and the first division of new cells occurs between 2-7 days of culture.

(4) Selection of somatic hybrid cells: The fusion product of protoplasts without nucleus of different cells is called a hybrid. Following this nuclear fusion happen. This process is called somatic hybridization.

(b) Write a note on Henna.
Answer:
Botanical name: Lawsonia inermis.
Family: Lythraceae.
Origin and Area of cultivation: It is indigenous to North Africa and South-west Asia. It is grown mostly throughout India, especially in Gujarat, Madhya Pradesh and Rajasthan.

Uses:
An orange dye ‘Henna’ is obtained from the leaves and young shoots of Lawsonia inermis. The principal colouring matter of leaves ‘lacosone’ is harmless and causes no irritation to the skin. This dye has long been used to dye skin, hair and finger nails. It is used for colouring leather, for the tails of horses and in hair-dyes.

Question 6.
Some organisms are able to maintain homeostasis by physical means ________.
(a) Conform
(b) Regulate
(c) Migrate
(d) Suspend
Answer:
(b) Regulate

Question 10.
What is colostrum? Write its significance.
Answer:
The mammary glands secrete a yellowish fluid called colostrum during the initial few days after parturition. It has less lactose than milk and almost no fat, but it contains more proteins, vitamin A and minerals. Colostrum is also rich in IgA antibodies. This helps to protect the infant’s digestive tract against bacterial infection.

Question 12.
Mention the main objections to Darwinism.
Answer:
Some objections raised against Darwinism were –

Question 15.
Alien species invasion is a threat to endemic species – substantiate this statement.
Answer:
Exotic species are organisms often introduced unintentionally or deliberately for commercial purpose, as biological control agents and other uses. They often become invasive and drive away the local species and is considered as the second major cause for extinction of species. Tilapia fish (Jilabi kendai) (Oreochromis mosambicus) introduced from east coast of South Africa in 1952 for its high productivity into Kerala’s inland waters, became invasive, due to which the native species such as Puntius dubius and Labeo kontius face local extinction.

Amazon sailfin catfish is responsible for destroying the fish population in the wetlands of Kolkata. The introduction of the Nile Perch, a predatory fish into Lake Victoria in East Africa led to the extinction of an ecologically unique assemblage of more than 200 nature species of cichlid fish in the lake.

Question 16.
In what way Peyang conserved the forests?
Answer:
The ‘Forest man of India’, Jadav Payeng who created 1,360 acres of dense and defiant forest was born in Arunasapori (a river island on the Brahmaputra). He had just completed his Class X exams in 1979 when he started to sow the seeds and shoots on the eroded island covered with sand and silt. Thirty-six years later he had converted the once unproductive land into a forest.

Payeng’s forest is now home to five Royal Bengal tigers, over a hundred deer, wild boar, vultures, and several species of birds. For his remarkable initiative, the Jawaharlal Nehru University invited Payeng in 2012 on Earth Day and honoured him with the title of the ‘ Forest Man of India ’.

Question 19.
Explain the role of cry-genes in genetically modified crops.
Answer:
Bacillus thuringiensis is a soil dwelling bacterium which is commonly used as a biopesticide and contains a toxin called cry toxin. Scientists have introduced this toxin producing genes into cotton and have raised genetically engineered insect resistant cotton plants.

During sporulation Bacillus thuringiensis produces crystal proteins called Delta-endotoxin which is encoded by cry genes. Delta-endotoxins have specific activities against the insects of the orders Lepidoptera, Diptera, Coleoptera and Hymenoptera. When the insects ingest the toxin crystals their alkaline digestive tract denatures the insoluble crystals making them soluble. The cry toxin then gets inserted into the gut cell membrance and paralyzes the digestive tract. The insect then stops eating and starves to death.

Question 20.
(a) Describe the structure of human spermatozoa with a labelled diagram.
Answer: The human sperm is a microscopic, flagellated and motile gamete. The whole body of the sperm is enveloped by plasma membrane and is composed of a head, neck and a tail. The head comprises of two parts namely acrosome and nucleus. Acrosome is a small cap like pointed structure present at the tip of the nucleus and is formed mainly from the Golgi body of the spermatid.

It contains hyaluronidase, a proteolytic enzyme, popularly known as sperm lysin which helps to penetrate the ovum during fertilization. The nucleus is flat and oval. The neck is very short and is present between the head and the middle piece. It contains the proximal centriole towards the nucleus which plays a role in the first division of the zygote and the distal centriole gives rise to the axial filament of the sperm. The middle piece possesses mitochondria spirally twisted around the axial filament called mitochondrial spiral or nebenkem.

It produces energy in the form of ATP molecules for the movement of sperms. The tail is the longest part of the sperm and is slender and tapering. It is formed of a central axial filament or axoneme and an outer protoplasmic sheath. The lashing movements of the tail push the sperm forward.

The lac operon consists of one regulator gene (‘i’ gene refers to inhibitor) promoter sites (p), and operator site (o). Besides these, it has three structural genes namely lac z, y and lac a. The lac ‘z’ gene codes for β-galactosidase, lac ‘y’ gene codes for permease and ‘a’ gene codes for transacetylase. Jacob and Monod proposed the classical model of Lac operon to explain gene expression and regulation in E.coli.

In lac operon, a polycistronic structural gene is regulated by a common promoter and regulatory gene. When the cell is using its normal energy source as glucose, the ‘i’ gene transcribes a repressor mRNA and after its translation, a repressor protein is produced. It binds to the operator region of the operon and prevents translation, as a result, β-galactosidase is not produced. In the absence of preferred carbon source such as glucose, if lactose is available as an energy source for the bacteria then lactose enters the cell as a result of permease enzyme. Lactose acts as an inducer and interacts with the repressor to inactivate it.

The repressor protein binds to the operator of the operon and prevents RNA polymerase from transcribing the operon. In the presence of inducer, such as lactose or allolactose, the repressor is inactivated by interaction with the inducer. This allows RNA polymerase to bind to the promotor site and transcribe the operon to produce lac mRNA which enables formation. Question 21.
(a) Explain stabilizing, directional and disruptive selection with examples.
Answer:
(1) Stabilising selection (centipetal selection): This type of selection operates in a stable environment. The organisms with average phenotypes survive whereas the extreme individuals from both the ends are eliminated. There is no speciation but the phenotypic stability is maintained within the population over generation. For example, measurements of sparrows that survived the storm clustered around the mean, and the sparrows that failed to survive the storm clustered around the extremes of the variation showing stabilizing selection.

(2) Directional Selection: The environment which undergoes gradual change is subjected to directional selection. This type of selection removes the individuals from one end towards the other end of phenotypic distribution. For example, size differences between male and female sparrows. Both male and female look alike externally but differ in body weight. Females show directional selection in relation to body weight.

(3) Disruptive selection: (centrifugal selection) When homogenous environment changes into heterogenous environment this type of selection is operational. The organisms of both the extreme phenotypes are selected, whereas individuals with average phenotype are eliminated. This results in splitting of the population into sub population/species.

This is a rare form of selection but leads to formation of two or more different species. It is also called adaptive radiation. (e.g:) Darwin’s finches beak size in relation to seed size inhabiting Galapagos islands. Group selection and sexual selection are other types of selection. The two major group selections are Altrusim and Kin selection.

(b) Tabulate the various types of innate immunity and their action mechanism.
Answer: