Question 2.
Consider the following statements
(i) In interhalogen compounds, the central atom will be the smaller one.
(ii) It can be formed only between two halogen and not more than two halogens.
(iii) They are strong reducing agents.
Which of the above statement(s) is / are not correct?
(a) (i) only
(b) (ii) and (iii)
(c) (i) and (iii)
(d) (iii) only
Answer:
(c) (i) and (iii)

Question 3.
Thermodynamically the most stable form of carbon is ………….
(a) Diamond
(b) graphite
(c) Fullerene
(d) none of these
Answer:
(b) graphite

Question 4.
Which one of the following transition element has maximum oxidation states?
(a) Manganese
(b) Copper
(c) Scandium
(d) Titanium
Answer:
(a) Manganese 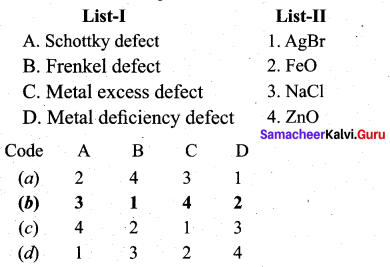 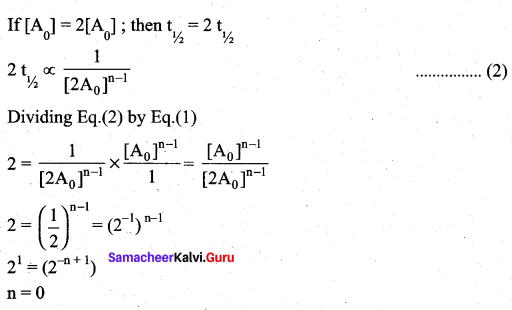 Question 12.
Predict the product Z in the following series of reactions

Question 15.
Which one of the following is used to provide relief from the allergic effects?
(a) cetrizine
(b) ampicillin
(c) erythromycin
(d) milk of magnesia
Answer:
(a) cetrizine

Question 16.
Magnesite (Magnesium carbonate) is calcined to obtain magnesia, which is used to make refractory bricks. Write the decomposition reaction.
Answer:
Magnesite is a carbonate of magnesium. Magnesite when heated at 800°C to 1000°C at the CO2 content in it is driven off. The residue so obtained is known as calcined magnesite.

Question 18.
Compare the stability of Ni4+ and Pt4+ from their ionisation enthalpy values.

Question 19.
Why is glass considered as super cooled liquid?
Answer:
Glass is an amorphous solid. Like liquids it has a tendency to flow, though very slowly. The proof of this fact is that glass panes in the windows or doors of old buildings are invariably found to be slightly thicker at the bottom than at the top.

Question 21.
Can Fe3+ oxidises Bromide to bromine under standard conditions?

If E°cell is -ve; ∆G is +ve and the cell reaction is non-spontaneous.
Hence, Fe3+ cannot oxidise Bromide to Bromine.

Question 22.
What are used of Urotropine? Give its structure.
Answer:
This is the structure of Urotropine (Hexamethylene tetramine) 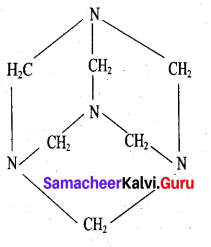 Question 24.
What are antihistamines? Give example and mention its use.
Answer: 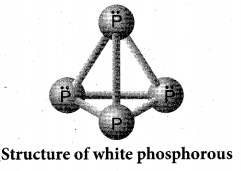 Question 27.
Why do zirconium and Hafnium exhibit similar properties?
Answer:

Question 28.
How will derive the formula of density of a unit cell?
Answer:
Using the edge length of a unit cell, we can calculate the density (p) of the crystal by considering a cubic unit cell as follows.

Question 29.
The salt of strong acid and strong base does not undergo hydrolysis. Explain.
Answer:
(i) In this case, neither the cations nor the anions undergo hydrolysis. Therefore the solution remains neutral.
(ii) For example, in the aqueous solution of NaCl, its ions Na+ and Cl– ions have no tendency to react with H+ or OH– ions of water. This is because the possible products of such reaction are NaOH and HC1 which are completely dissociated. As a result, there is no change in the concentration of H+ and OH– ions and hence the solution continues to remain neutral.

Question 30.
Write a note about medicinal applications of colloids.
Answer:

Question 31.
Predict the major product, when 2-methyl but -2-ene is converted into an alcohol in each of the following methods.
(i) Acid catalysed hydration (ii) Hydroboration (iii) Hydroxylation using bayers reagent
Answer: 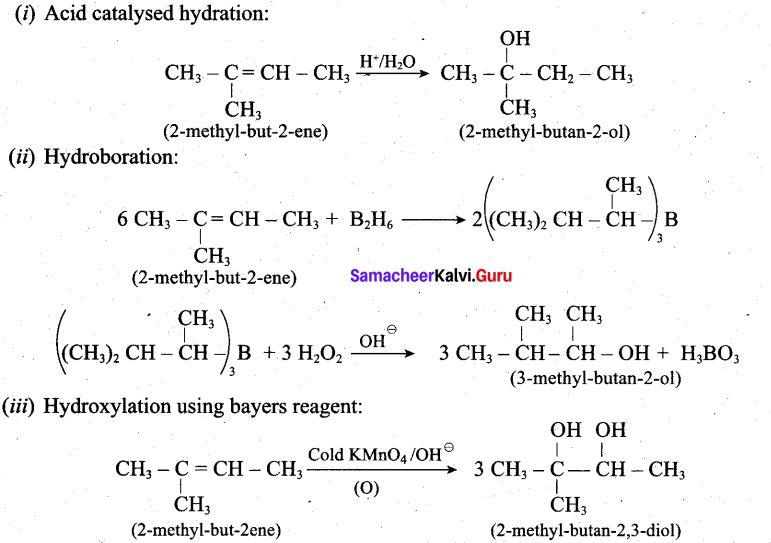 Aliphatic primary amines also react with HNO2 at 273-278 K to form aliphatic diazonium salts. But these are unstable even at low temperature and thus decomposes readily to form a mixture of compounds consisting of alkyl chlorides, alkenes and alcohols, out of which ‘ alcohols generally predominates.

Question 33.
What are the advantages of food additives?
Answer:

Question 34.
(a) (i) Out of coke and CO, which is better reducing agent for the reduction of ZnO? Why? (2)
(ii) An element (A) extracted from kernite. A reacts with nitrogen at high temperature gives B. A reacts with alkali to form C. Find out A, B and C. Give the chemical equations. (3)
[OR]
(b) (i) Deduce the oxidation number of oxygen in hypofluorous acid – HOF. (2)
(ii) Which catalyst is used in the conversion of acetaldehyde to acetic acid? Give equation. (3)
Answer:
(a) (i) Coke (C) is a better reducing agent for the reduction of ZnO.
Because, when we use coke, the reduction can be easily carried out at 673 K. Thus Carbon (Coke) reduces zinc oxide more easily than carbon monoxide (CO). From the Ellingham diagrams, it is quite clear that the reduction of zinc oxide is more favourable using coke (∆G for the formation of carbon monoxide from carbon is more negative).

Question 35.
(a) (i) Prove that H2SO4 is a strong dibasic acid. (2)
(ii) Distinguish tetrahedral and octahedral voids. (3)
[OR]
(b) In an octahedral crystal field, draw the figure to show splitting of d orbitals. (5)
Answer:
(a) (i) Sulphuric acid forms two types of salts namely sulphates and bisulphates.

Step 2: The ligands are approaching the metal atom in actual bond directions. To illustrate this let us consider an octahedral field, in which the central metal ion is located at the origin and the six ligands are coming from the +x, -x, +y, -y,
+z and -z directions as shown below.

As shown in the figure, the orbitals lying along the axes dx2 – y2 and dz2 orbitals will experience strong repulsion and raise in energy to a greater extent than the orbitals with lobes directed between the axes (dxy, dyz and dzx). Thus the degenerate d orbitals now split into two sets and the process is called crystal field splitting. 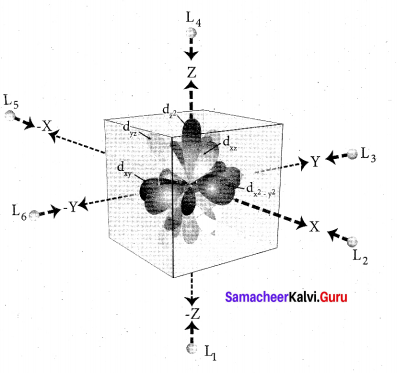 Step 3: Up to this point the complex formation would not be favoured. However, when the ligands approach further, there will be an attraction between the negatively charged electron and the positively charged metal ion, that results in a net decrease in energy. This decrease in energy is the driving force for the complex formation.
During crystal field splitting in octahedral field, in order to maintain the average energy of the orbitals (barycentre) constant, the energy of the orbitals dx2 y2 and d z2 (represented as e2 orbitals) = will increase by 3/5 ∆0 while that of the- other three orbitais dxy , dyz and dzx (represented t2gas t orbitais) decrease by 2/5 ∆0 . Here, ∆0 represents the crystal field splitting energy in the octahedral field. 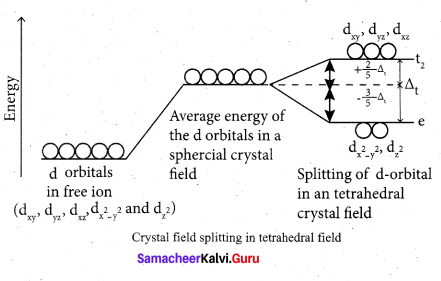 Question 36.
(a) Explain briefly the collision theory of bimolecular reactions. (5)
[OR]
(b) Discuss about the hydrolysis of salt of weak acid and weak base and derive pH value for the solution. (5)
Answer:
(a) Collision theory is based on the kinetic theory of gases. According to this theory, chemical reactions occur as a result of collisions between the reacting molecules. Let its understand this theory by considering the following reaction.
A2(g) + B2(g) → 2AB(g)

The collision rate in gases can be calculated from kinetic theory of gases. For a gas at room temperature (298K) and 1 atm pressure, each molecule undergoes approximately 109 collisions per second, i.e., 1 collision in 10-9 second. Thus, if every collision resulted in reaction, the reaction would be complete in 10-9 second. In actual practice this does not happen. It implies that all collisions are not effective to lead to the reaction.

(b) (i) Why does bleeding stop by rubbing moist alum. (2)
(ii) How is glycerol reacts with fuming nitric acid? (or) How would you convert glycerol into nitroglycerine? (3)
Answer: 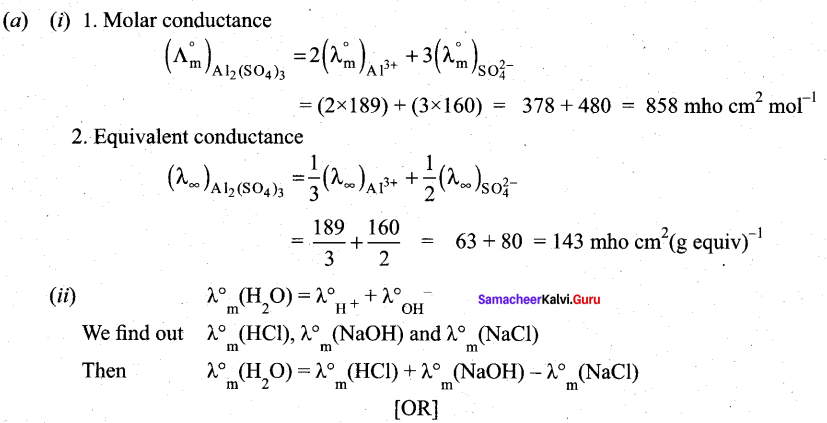 (b) (i) Blood is a colloidal sol. When we rub the injured part with moist alum then coagulation of blood takes place. Hence main reason is coagulation, which stops the bleeding. Therefore bleeding stop by rubbing moist alum.
(ii)

Question 38.
(a) (i) What is crossed cannizaro reaction? Explain it. (2)
(ii) Complete the following reactions.(3) 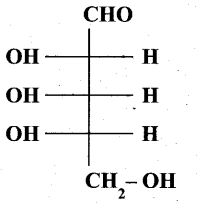 (ii) Write a note on vulcanization of rubber. (3)
Answer:
(a) (i) When Cannizaro reaction (Auto redox reaction) takes place between two different aldehyde, the reaction is called as crossed cannizaro reaction. 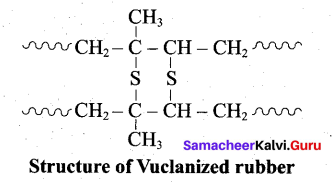