Question 7.
The headquarters of Reserve Bank of India is located at……….
(a) Delhi
(b) Chennai
(c) Mumbai
(d) Banglore
Answer:
(c) Mumbai

Question 17.
Which is responsible for protecting people from harmful ultra violet rays?
(a) UV -A
(b) UV – C
(c) Ozone layer
(d) None of the above
Answer:
(c) Ozone layer

Question 20.
If both variables X and Y increase or decrease simultaneously, then the coefficient of correlation will be
(a) Positive
(b) Negative
(c) 0
(d) 1
Answer:
(a) Positive

Question 22.
What is GDP deflator?
Answer:
GDP deflator is an index of price changes of goods and services included in GDP. It is a price index which is calculated by dividing the nominal GDP in a given year by the real GDP for the same year and multiplying it by 100.
GDP deflator = \(\frac{Nominal GDP}{Real GDP}\) x 100

Question 24.
Write a note on stagflation.
Answer:
Stagflation is a combination of stagnant economic growth, high unemployment and high inflation.

Question 26.
What is meant by Balance of Payment?
Answer:

Question 30.
What is pollution and write the types of pollution?
Answer:
Pollution is the introduction of contaminants into the natural environment that causes adverse change, in the form of killing of life, toxicity of environment, damage to ecosystem and aesthetics of our surrounding.
Types of Pollution

Question 31.
List out the uses of National Income.
The following are some of the concepts used in measuring national income.
GDP:
GDP is the total market value of final goods and services produced within the country during a year. This is calculated at market prices and is known as GDP at market prices. Thus GDP by expenditure method at market prices = C + I + G + (X – M)
Where C – Consumption goods;
I – Investment goods;
G – Government purchases;
(X – M) is net export which can be positive or negative.

NNP at Factor cost:
NNP refers to the market value of output. NNP at factor cost is the total of income payment made to factors of production.

Personal Income:
Personal income is the total income received by the individuals of a country from all sources before payment of direct taxes in a year.

GDP deflator:
GDP deflator is an index of price changes of goods and services included in GDP. It is a price index which is calculated by dividing the nominal GDP in a given year by the real GDP for the same year and multiplying it by 100. 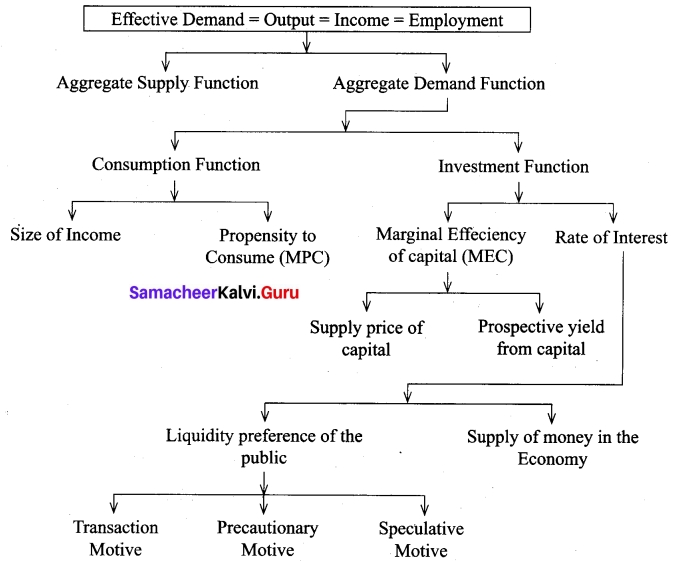 Question 34.
What are the functions of NABARD?
Functions of NABARD:
NABARD has inherited its apex role from RBI i.e, it is performing all the functions performed by RBI with regard to agricultural credit.
(i) NABARD acts as a refinancing institution for all kinds of production and investment credit to agriculture, small-scale industries, cottage and village industries, handicrafts and rural crafts and real artisans and other allied economic activities with a view to promoting integrated rural development.

(v) It maintains a Research and Development Fund to promote research in agriculture and rural development.

Question 35.
What are the import quotas?
Answer:
Import Control: Imports may be controlled by

Question 37.
Point out any three differences between direct and indirect taxes.
Answer:

Question 40.
Mention the limitations of Macro Economics.
Answer:
Macro economics suffers from certain limitations. They are: 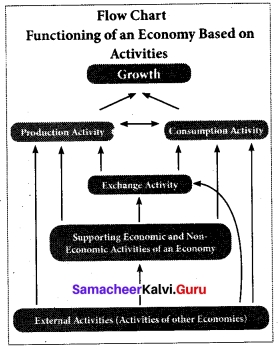 (b) Calculate the Karl Person Correlation co-efficient for the following data. 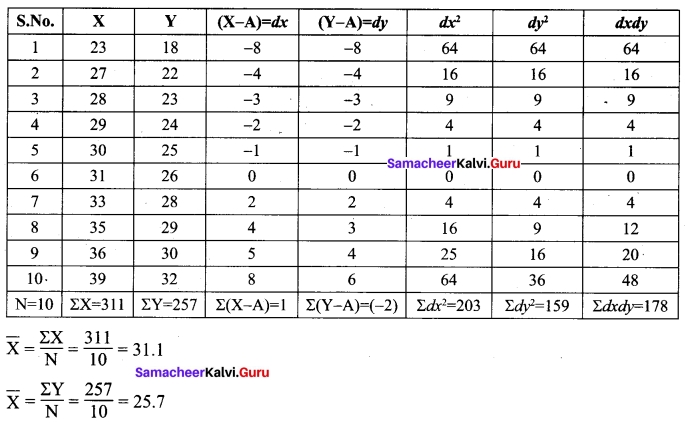 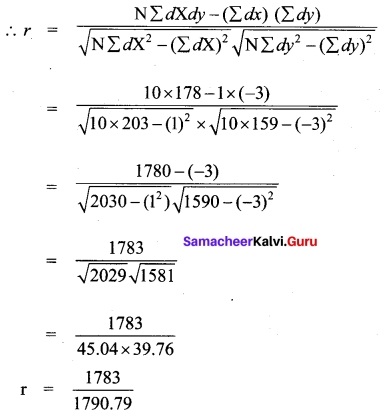 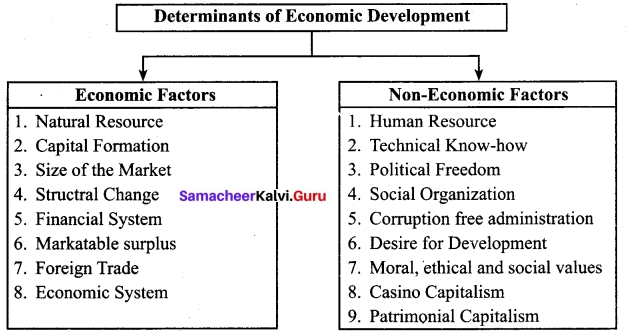 3. Size of the Market: Large size of the market would stimulate production, increase employment and raise the National per capita income. That is why developed countries expand their market to other countries through WTO.

5. Financial System: Financial system implies the existence of an efficient and organized banking system in the country.

6. Marketable Surplus: Marketable surplus refers to the total amount of farm output cultivated by farmers over and above their family consumption needs. This is a surplus that can be sold in the market for earning income.

7. Foreign Trade: The country which enjoys favorable balance of trade and terms of trade is always developed. It has huge forex reserves and stable exchange rate.

Non-Economic Factors:
‘Economic Development has much to do with human endowments, social attitudes, political conditions and historical accidents. Capital is a necessary but not a sufficient condition of progress.’
1. Human Resources: Human resource is named as human capital because of its power to increase productivity and thereby national income. There is a circular relationship between human development and economic growth. A healthy, educated and skilled labour force is the most important productive asset. Human capital formation is the process of increasing knowledge, skills and the productive capacity of people.

2. Technical Know-how: As the scientific and technological knowledge advances, more and more sophisticated techniques steadily raise the productivity levels in all sectors.

3. Political Freedom: The process of development is linked with the political freedom.

4. Social Organization: People show interest in the development activity only when they feel that the fruits of development will be fairly distributed.

5. Corruption free administration: Corruption is a negative factor in the growth process. Unless the countries root-out corruption in their administrative system, the crony capitalists and traders will continue to exploit national resources.

7. Moral, ethical and social values: These determine the efficiency of the market, according to Douglas C. North. If people are not honest, market cannot function.

8. Casino Capitalism: If People spend larger proportion of their income and time on entertainment liquor and other illegal activities, productive activities may suffer, according to Thomas Piketty.

9. Patrimonial Capitalism: If the assets are simply passed on to children from their parents, the children would not work hard, because the children do not know the value of the assets.

(b) Critically explain say’s law of market.
Answer:
Criticisms of Say’s Law:
The following are the criticisms against Say’s law:

(b) Briefly explain the relationship between GDP growth and the quality of environment.
Answer: 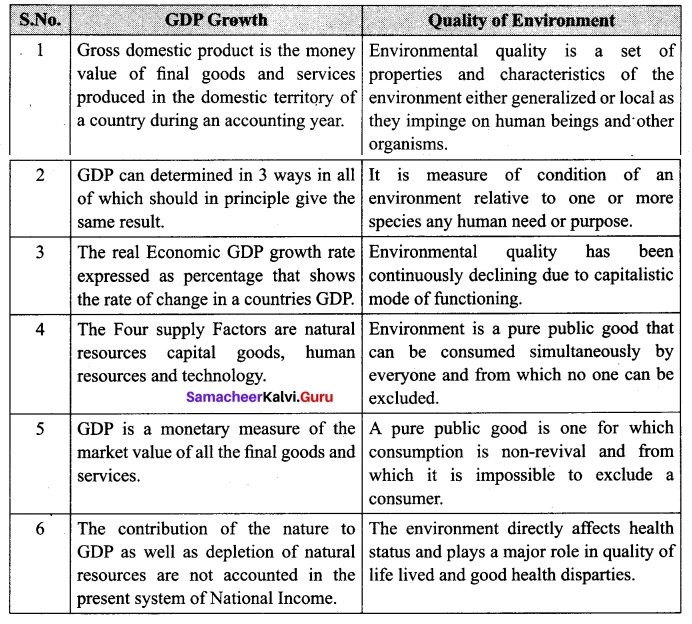 Question 44 (a).
Illustrate the working of multiplier.
Answer:
Working of Multiplier:

(b) Bring out the components of balance of payments accounts.
Answer:
Components of BOPs:
The credit and debit items are shown vertically in the BOP account of a country. Horizontally, they are divided into three categories, i.e.,

3. The Official Reserve Assets Account: Official reserve transactions consist of movements of international reserves by governments and official agencies to accommodate imbalances arising from the current and capital accounts.

The official reserve assets of a country include its gold stock, holdings of its convertible foreign currencies and Special Drawing Rights (SDRs) and its net position in the International Monetary Fund (IMF).

Question 45 (a).
Explain in detail the measures to control inflation.
Answer:
Measures to Control Inflation
Keynes and Milton Friedman together suggested three measures to prevent and control of inflation.

2. Fiscal Measures: Fiscal policy is now recognized as an important instrument to tackle an inflationary situation. The major anti-inflationary fiscal measures are the following: Reduction of Government Expenditure, Public Borrowing and Enhancing taxation.

3. Other Measures: These measures can be divided broadly into short-term and long-term measures.
i) Short-term measures can be in regard to public distribution of scarce essential commodities through fair price shops (Rationing). In India whenever shortage of basic goods has been felt, the government has resorted to import so that inflation may not get triggered.
ii) Long-term measures will require accelerating economic growth especially of the wage goods which have a direct bearing on the general price and the cost of living. Some restrictions on present consumption may help in improving saving and investment which may be necessary for accelerating the rate of economic growth in the long run.

(b) Distinguish between Public Finance and Private Finance.
Answer: 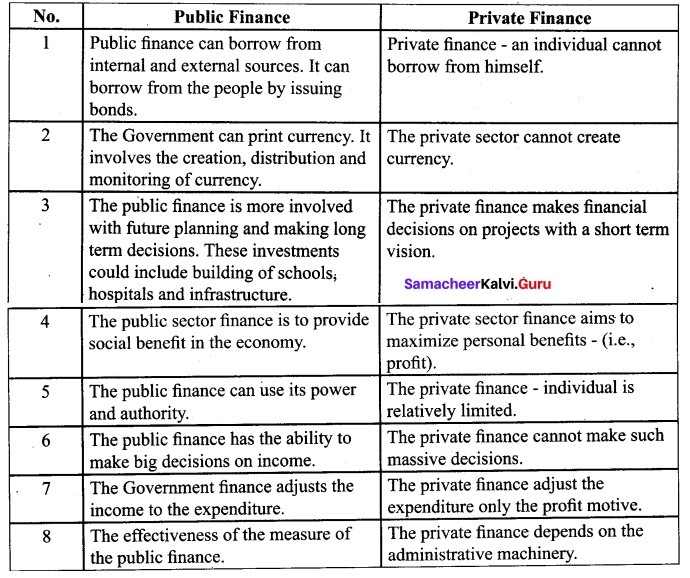 2. The issuer of currency: The objective is to maintain the currency and credit system of the country. It is the sole authority to issue currency. It also takes action to control the circulation of fake currency.

3. The issuer of Banking License: As per Sec 22 of Banking Regulation Act, every bank has to obtain a banking license from RBI to conduct banking business in India.

4. Banker to the Government: It acts as banker both to the central and the state governments. It provides short-term credit. It manages all new issues of government loans, servicing the government debt outstanding and nurturing the market for government securities. It advises the government on banking and financial subjects.

5. Banker’s Bank: RBI is the bank of all banks in India as it provides loan to banks, accept the deposit of banks, and re-discount the bills of banks.

6. Lender of last resort: The banks can borrow from the RBI by keeping eligible securities as collateral at the time of need or crisis, when there is no other source.

7. Act as clearing house: For settlement of banking transactions, RBI manages 14 clearing houses. It facilitates the exchange of instruments and processing of payment instructions.

8. Custodian of foreign exchange reserves: It acts as a custodian of FOREX. It administers and enforces the provision of Foreign Exchange Management Act (FEMA), 1999. RBI buys and sells foreign currency to maintain the exchange rate of Indian rupee v/s foreign currencies.

9. Regulator of Economy: It controls the money supply in the system, monitors different key indicators like GDP, Inflation, etc.

12. Developmental Role: This role includes the development of the quality banking system in India and ensuring that credit is available to the productive sectors of the economy. It provides a wide range of promotional functions to support national objectives. It also includes establishing institutions designed to build the country’s financial infrastructure. It also helps in expanding access to affordable financial services and promoting financial education and literacy.

13. Publisher of monetary data and other data: RBI maintains and provides all essential banking and other economic data, formulating and critically evaluating the economic policies in India. RBI collects, collates and publishes data regularly.

14. Exchange manager and controller: RBI represents India as a member of the International Monetary Fund [IMF], Most of the commercial banks are authorized dealers of RBI.

(b) Write a note on
(i) SAARC
(ii) BRICS
Answer:
(i) South Asian Association For Regional Co-Operation (SAARC):

Question 47 (a).
Describe the phases of trade cycle.
Answer:
Phases of Trade Cycle 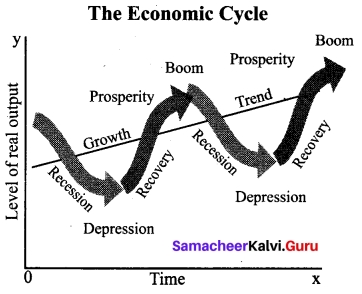 The four different phases of trade cycle is referred to as

(iv) Debt Servicing:
The government has been borrowing heavily both from the internal and external sources, As a result, the government has to make huge amounts of repayment towards debt servicing.