Question 7.
Match the following and choose the correct answer by using codes given below

Question 11.
Match the following and choose the correct answer by using codes given below.

Question 15.
Match the following and choose the correct answer by using codes given below.

Question 26.
What are the functions of primary deposits?
Answer:
Primary Deposits:

Question 27.
What is Free trade area?
Answer:
A free trade area is the region encompassing a trade bloc whose member countries have signed a free-trade agreement (FTA). Such agreements involve cooperation between at least two countries to reduce trade barriers, e.g. SAFTA, EFTA.

Question 28.
What is “AoA”?
Answer:
AoA means Agreement on Agriculture. Agriculture was included for the first time under GATT. The important aspects of the agreement are Tariffication, Tariff cuts and Subsidy reduction.

Question 29.
Define “Public debt”.
Answer:
The debt is the form of promises by the Treasury to pay to the holders of these promises a principal sum and in most instances interest on the principal. Borrowing is resorted to in order to provide funds for financing a current deficit. – J. Philip E. Taylor

Question 31.
State the importance of Macro Economics.
Answer:
The importance and the need for introducing a macro outlook of an economy are given below:

Question 32.
Discuss the limitations of Macro Economics.
Answer:
Macro economics suffers from certain limitations. They are:

Question 38.
Write the Determinants of Investment Function?
Answer:
The classical economists believed that investment depended exclusively on rate of interest. In reality investment decisions depends on a number of factors. They are as follows:
However, Keynes contended that business expectations and profits are more important in deciding investment. He also pointed out that investment depends on MEC (Marginal Efficiency of Capital) and rate of interest.
(i) Private investment is an increase in the capital stock such as buying a factory or machine.
(ii) The marginal efficiency of capital (MEC) states the rate of return on an investment project. Specifically, it refers to the annual percentage yield (output) earned by the last additional unit of capital.

Question 39.
Explain the disadvantages of FDI.
Answer:
The following criticisms are leveled against foreign direct investment.

Question 41 (a).
Discuss the scope of Macro Economics.
Answer:
The study of macro economics has wide scope and it covers the major areas as follows:
1. National Income: Measurement of national income and its composition by sectors are the basic aspects of macroeconomic analysis. The trends in National Income and its composition provide a long term understanding of the growth process of an economy.

3. Business Cycle: Almost all economies face the problem of business fluctuations and business cycle. The cyclical movements (boom, recession, depression and recovery) in the economy need to be carefully studied based on aggregate economic variables.

5. Economic Growth: The growth and development of an economy and the factors determining them could be understood only through macro analysis.

6. Economic Policies: Macro Economics is significant for evolving suitable economic policies. Economic policies are necessary to solve the basic problems, to overcome the obstacles and to achieve growth. 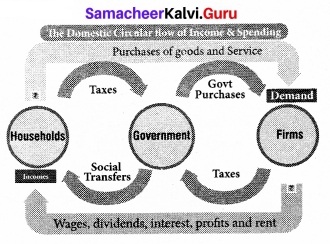 2. To formulate the national policies such as monetary policy, fiscal policy and other policies; the proper measures can be adopted to bring the economy to the right path with the help of collecting national income data.

3. To formulate planning and evaluate plan progress; it is essential that the data pertaining to a country’s gross income, output, saving and consumption from different sources should be available for economic planning.

4. To build economic models both in short – run and long – run.

6. To know a country’s per capita income which reflects the economic welfare of the country (Provided income is equally distributed)

7. To know the distribution of income for various factors of production in the country.

(b) Explain about aggregate supply with the help of diagram.
Answer: 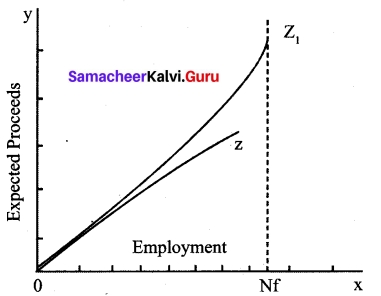 Question 43 (a).
Describe the Say’s Law of Market.
Answer:

(b) Explain Marginal Propensity to Consume [MPC] and Multiplier with diagram and Diagrammatic explanation.
Answer:
Marginal propensity to consume and multiplier: 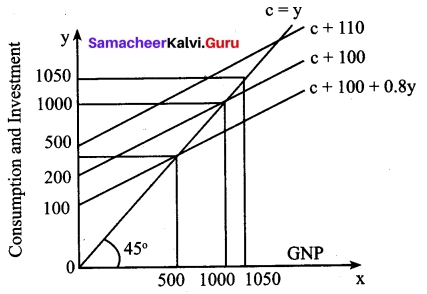 The propensity to consume refers to the portion of income spent on consumption.
The MPC refers to the relation between change in consumption (C) and change in income (Y).
Symbolically MPC = AC/AY The value of multiplier depends on MPC
Multiplier (K)= 1/1-MPC The multiplier is the reciprocal of one minus marginal propensity to consume.
Since marginal propensity to save is 1 – MPC. (MPC + MPS = 1). Multiplier is 1/ MPS. The multiplier is therefore defined as reciprocal of MPS.
Multiplier is inversely related to MPS and directly with MPC.
Numerically if MPC is 0.75, MPS is 0.25 and k is 4.
Using formula k = 1/1 – MPC
1/1 – 0.75 = 1/0.25 = 4
Taking the following values, we can explain the functioning of multiplier.

(ii) Walking Inflation: When prices rise moderately and the annual inflation rate is a single digit (3% – 9%), it is called walking or trolling inflation.

(iii) Running Inflation: When prices rise rapidly like the running of a horse at a rate of speed of 10% – 20% per annum, it is called running inflation.

Other types of inflation (on the basis of inducement):

(b) What are the functions of NABARD?
Answer:
Functions of NABARD:
NABARD has inherited its apex role from RBI i.e, it is performing all the functions performed by RBI with regard to agricultural credit.
(i) NABARD acts as a refinancing institution for all kinds of production and investment credit to agriculture, small-scale industries, cottage and village industries, handicrafts and rural crafts and real artisans and other allied economic activities with a view to promoting integrated rural development.

(b) Damage Physiological and Psychological health:

2. Classification on the Basis of Function:
Adam Smith classified public expenditure on the basis of functions of government in the
following main groups:

(b) Explain the effects of Air pollution.
Answer:
1. Respiratory and heart problems: It creates several respiratory and heart ailments along with cancer. Children are highly vulnerable and exposed to air pollutants and commonly suffer from pneumonia and asthma.

2. Global warming: Increasing temperature in the atmosphere leads to global warming and thereby to increase sea level rise and melting of polar icebergs, displacement and loss of habitat.

3. Acid rain: Harmful gases like nitrogen oxides and sulfur oxides are released into the atmosphere during the burning of fossil fuels. Acid rain causes grate damage to human beings, animals and crops.

4. Eutrophication: Eutrophication is a condition where high amount of nitrogen present in some pollutants which adversely affects fish, plants and animal species.

5. Effect on Wildlife: Toxic chemical present in the air can force wildlife species to move to new place and change their habitat.

SFCs depend upon the IDBI for refinance in respect of the term loans granted by them. Apart from these, the SFCs can also make temporaiy borrowings from the RBI and borrowings from IDBI and by the sale of bond