Question 6.
Match the following and choose the correct answer by using codes given below:

Question 9.
………… inflation results in a serious depreciation of the value of money.
(a) Creeping
(b) Walking
(c) Running
(d) Hyper
Answer:
(d) Hyper

Question 22.
Define Profit Motive.
Answer:
Profit Motive: Profit is the driving force behind all economic activities in a capitalistic economy. Each individual and organization produce only those goods which ensure high profit. Advance technology, division of labour, and specialisation are followed. The golden rule for a producer under capitalism is ‘to maximize profit.’

Question 23.
Define National Income.
Answer:
National Income means the total money value of all final goods and services produced in a country during a particular period of time (one year).

Question 24.
Define “Capital Gains”.
Answer:
The problem also arises with regard to capital gains. Capital gains arise when a capital asset such as a house, other property, stocks or shares, etc. is sold at higher price than was paid for it at the time of purchase. Capital gains are excluded from national income.

Question 26.
What do you mean by propensity to save?
Answer:

Question 28.
Write IMF Functions group.
Answer:
The functions of the IMF are grouped under three heads.

Question 31.
Indicate the demerits of socialism.
Answer:
Demerits of Socialism:

Question 33.
What is the main feature of rural unemployment?
Answer:

Question 38.
What are the functions of statistics?
Answer:

Question 40.
What is the main difference between Adam Smith and Ricardo with regard to the emergence of foreign trade?
Answer: 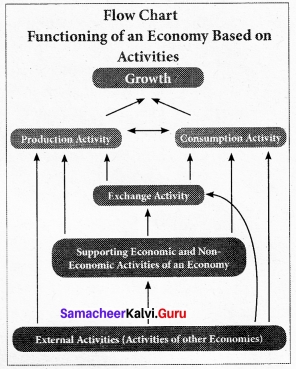 In addition to these supporting activities, external activities from other economies such as import, export, international relations, emigration, immigration, foreign investment, foreign exchange earnings, etc. also influence the entire functioning of the economy.

(b) Discuss the importance of social accounting in economic analysis.
Answer:
National Income and Social Accounting:

1. “Firms” undertake productive activities. Thus, they are all organizations which employ the factors of production to produce goods and services.
2. “Households” are consuming entities and represent the factors of production, who receive payment for services rendered by them to firms. Households consume the goods and services that are produced by the firms.
3. “The Government sector” refers to the economic transactions of public bodies at all levels, centre, state and local. The main function of the government is to provide social goods like defence, public health, education, etc.
4. “Rest of the world sector” relates to international economic transactions of the country. It contains income, export and import transactions, external loan transaction, and allied overseas investment income and payments.
5. “Capital sector” refers to saving and investment activities. It includes the transactions of banks, insurance corporations, financial houses, and other agencies of the money market.

Question 43 (a).
Mention the differences between accelerator and multiplier effect.
Answer: 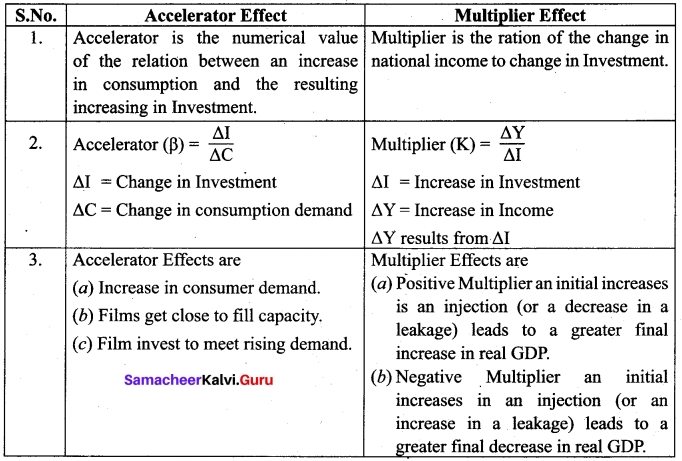 (iii) Increase in Public Expenditure: Government activities have been expanding due to developmental activities and social welfare programmes. This is also a cause for price rise.

(iv) Increase in Consumer Spending: The demand for goods and services increases when they are given credit to buy goods on hire-purchase and installment basis.

(v) Cheap Monetary Policy: Cheap monetary policy or the policy of credit expansion also leads to increase in the money supply which raises the demand for goods and services
in the economy.

(vi) Deficit Financing: In order to meet its mounting expenses, the government resorts to deficit financing by borrowing from the public and even by printing more notes.

(viii) Repayment of Public Debt: Whenever the government repays its past internal debt to the public, it leads to increase in the money supply with the public.

(ix) Increase in Exports: When exports are encouraged, domestic supply of goods decline. So prices rise.

(viii) Banks Promote Entrepreneurship:
In recent days, banks have assumed the role of developing entrepreneurship particularly in developing countries like India by inducing new entrepreneurs to take up the well- formulated projects and provision of counseling services like technical and managerial guidance.

(i) FDI may help to increase the investment level and thereby the income and employment in the host country.
(ii) Direct foreign investment may facilitate transfer of technology to the recipient country.
(iii) FDI may also bring revenue to the government of host country when it taxes profits of foreign firms or gets royalties from concession agreements.
(iv) A part of profit from direct foreign investment may be ploughed back into the expansion, modernization or development of related industries.
(v) It may kindle a managerial revolution in the recipient country through professional management and sophisticated management techniques.
(vi) Foreign capital may enable the country to increase its exports and reduce import requirements. And thereby ease BOP disequilibrium.
(vii) Foreign investment may also help increase competition and break domestic monopolies.
(viii) If FDI adds more value to output in the recipient country than the return on capital from foreign investment, then the social returns are greater than the private returns on foreign investment.
(ix) By bringing capital and foreign exchange FDI may help in filling the savings gap and the foreign exchange gap in order to achieve the goal of national economic development.
(x) Foreign investments may stimulate domestic enterprise to invest in ancillary industries in collaboration with foreign enterprises.

Question 45 (a).
What are the causes for the increase in government expenditure?
Answer:
The modem state is a welfare state. In a welfare state, the government has to perform several functions viz Social, Economic and political. These activities are the cause for increasing public expenditure.
1. Population Growth
During the past 67 years of planning, the population of India has increased from 36.1 crore in 1951, to 121 Crore in 2011. The growth in population requires massive investment in health and education, law and order, etc. Young population requires increasing expenditure on education and youth services, whereas the aging population requires transfer payments like old age pension, social security and health facilities.

3. Government Subsidies .
The Government of India has been providing subsidies on a number of items such as food, fertilizers, interest on priority sector lending, exports, education, etc. Because of the massive amounts of subsidies, the public expenditure has increased manifold..

The expenditure on subsidies by central government in 1990-91 was Rs 9581 crores which increased significantly to Rs 2,29,715.67 crores in 2018-19. Besides this, the corporate sectors also receive subsidies (incentives) of more than Rs 5 lakh crores.

4. Debt Servicing
The Government has been borrowihg heavily both from the internal and external sources. As a result, the government has to make huge amounts of repayment towards debt servicing.
The interest payment of the central government has increased from Rs 21,500 crores in 1990-91 to Rs 5,75,794 crores in 2018-19.

7. Industrialization
Setting up of basic and heavy industries involves a huge capital and long gestation period. It is the government which starts such industries in a planned economy. The under developed countries need a strong of infrastructure like transport, communication, power, fuel, etc….

Question 46 (a).
Explain the Cambridge approach.
(OR)
Cash Balance approach of Marshall equation.
Answer:
Marshall’s Equation
The Marshall equation is expressed as:
M = KPY
Where
M is the quantity of money
Y is the aggregate real income of the community
P is Purchasing Power of money
K represents the fraction of the real income which the public desires to hold in the form of money
Thus, the price level P = M/KY or the value of money in terms of this equation can be found out by dividing the total quantity of goods which the public desires to holdout of the total income by the total supply of money.
According to Marshall’s equation the value of money is influenced not only by change in M, but also by changes in K.

(b) Write the flow chart of correction of balance of payment disequilibrium?
Answer: 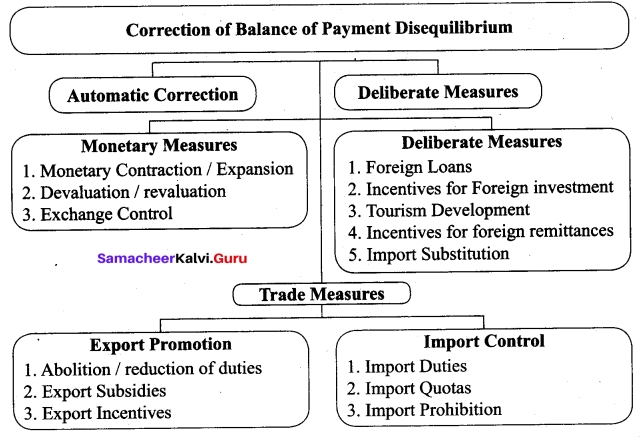 Question 47 (a).
Explain the methods of debt redemption.
Answer:
Methods of Redemption of Public Debt:
The process of repaying a public debt is called redemption. The Government sells securities to the public and at the time of maturity, the person who holds the security surrenders it to the Government. The following methods are adopted for debt redemption.
(i) Sinking Fund:

(ii) Sinking Fund:
Conversion of loans is another method of redemption of public debt.

(vi) Reduction in Rate of Interest:
Another method of debt redemption is the compulsory reduction in the rate of interest, during the time of financial crisis.

(b) Differentiate the economic model with econometric model.
Answer: