Question 2.
What is the value of resistance of the following resistor?

Question 9.
A plane glass is placed over a various coloured letters (violet, green, yellow, red) The letter which appears to be raised more is,
(a) red
(b) yellow
(c) green
(d) violet
Hint. Letters appear to be raised depending upon the refractive index of the material. Since violet has a higher refractive index than red (the index increases with frequency), red will be the lowermost.
Answer:
(d) violet

Question 17.
State Kirchhoff’s voltage rule.
Answer:
It states that in a closed circuit the algebraic sum of the products of the current and resistance of each part of the circuit is equal to the total emf included in the circuit. This rule follows from the law of conservation of energy for an isolated system.

Question 19.
What is meant by ‘Wattful current’?
Answer:
The component of current (IRMS cos Φ) which is in phase with the voltage is called active component. The power consumed by this current = VRMSIRMS cos Φ . So that it is also known as ‘WattfuT current.

Question 24.
hat do you mean by doping?
Answer:
The process of adding impurities to the intrinsic semiconductor is called doping.

Question 25.
What are the differences between Coulomb force and gravitational force?
Answer:

Question 28.
An inductor blocks AC but it allows DC. Why? and How?
Answer:
An inductor L is a closely wound helical coil. The steady DC current flowing through L produces uniform magnetic field around it and the magnetic flux linked remains constant. Therefore there is no self-induction and self-induced emf (back emf). Since inductor behaves like a resistor, DC flows through an inductor.

The AC flowing through L produces time-varying magnetic field which in turn induces self- induced emf (back emf)- This back emf, according to Lenz’s law, opposes any change in the current. Since AC varies both in magnitude and direction, its flow is opposed in L. For an ideal inductor of zero ohmic resistance, the back emf is equal and opposite to the applied emf. Therefore L blocks AC.

Question 29.
Derive the relation between/and R for a spherical mirror.
Answer:
Let C be the centre of curvature of the mirror. Consider a light ray parallel to the principal axis is incident on the mirror at M and passes through the principal focus F after reflection. The geometry of reflection of the incident ray is shown in figure. The line CM is the normal to the mirror at M. Let i be the angle of incidence and the same will be the angle of reflection.
If MP is the perpendicular from M on the principal axis, then from the geometry, The angles 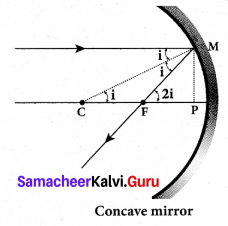 Question 30.
What is a photo cell? Mention the different types of photocells.
Answer:
photocells: Photo electric cell or photo cell is a device which converts light energy into electrical energy. It works on the principle of photo electric effect.
Types:

Question 31.
Show that nuclear density is almost constant for nuclei with Z > 10.
Answer:

The expression shows that the nuclear density is independent of the mass number A. In other words, all the nuclei (Z >10) have the same density and it is an important characteristics of the nuclei.

When frequency is equal to 1500 kHz

Question 34.
(a) Explain in detail the construction and working of a Van de Graaff generator.
Answer:
Principle: Electrostatic induction and action at points.
Construction: A large hollow spherical conductor is fixed on the insulating stand. A pulley B is mounted at the center of the hollow sphere and another pulley C is fixed at the bottom. A belt made up of insulating materials like silk or rubber runs over both pulleys. The pulley C is driven continuously by the electric motor. Two comb shaped metallic conductors E and D are ‘ fixed near the pulleys.
The comb D is maintained at a positive potential of 104 V by a power supply. The upper comb E is connected to the inner side of the hollow metal sphere. 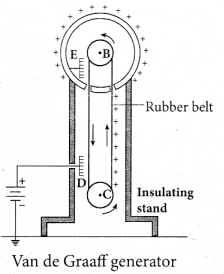 When the belt descends, it has almost no net charge. At the bottom, it again gains a large positive charge. The belt goes up and delivers the positive charges to the outer surface of the sphere. This process continues until the outer surface produces the potential difference of the order of 107 V which is the limiting value. We cannot store charges beyond this limit since the extra charge starts leaking to the surroundings due to ionization of air. The leakage of charges can be reduced by enclosing the machine in a gas filled steel chamber at very high pressure. Uses: The high voltage produced in this Van de Graaff generator is used to accelerate positive ions (protons and deuterons) for nuclear disintegrations and other applications.

Question 34.
(b) Explain the equivalent resistance of a series resistor network.
Answer:
Resistors in series: When two or more resistors are connected end to end, they are said to be in series. The resistors could be simple resistors or bulbs or heating elements or other devices. Fig. (a) shows three resistors R1, R2 and R3 connected in series. 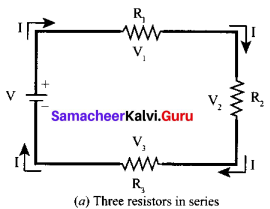 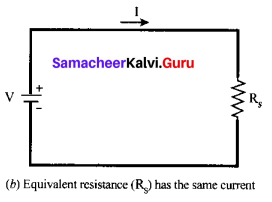 The amount of charge passing through resistor R1 must also pass through resistors R2 and R3 since the charges cannot accumulate anywhere in the circuit. Due to this reason, the current I passing through all the three resistors is the same. According to Ohm’s law, if same current pass through different resistors of different values, then the potential difference across each resistor must be different. Let V1, V2 and V3 be the potential difference (voltage) across each of the resistors R1, R2 and R3 respectively, then we can write V1 = IR1 V2 = IR2 and V3 = IR3. But the total voltage V is equal to the sum of voltages across each resistor.
V = V1 + V2 + V3
= IR1 + IR2 + IR3 ….. (1)
V = I(R1 + R2 + R3)
V = I.Rs ….. (2)
where Rs is the equivalent resistance,
Rs = R1 + R2 + R3 ….. (3)
When several resistances are connected in series, the total or equivalent resistance is the sum of the individual resistances as shown in fig. (b).
Note: The value of equivalent resistance in series connection will be greater than each individual resistance.

Question 35.
(a) Deduce the relation for the magnetic induction at a point due to an infinitely long straight conductor carrying current.
Answer:
Magnetic field due to long straight conductor carrying current: Consider a long straight wire NM with current I flowing from N to M. Let P be the point at a distance a from point O. Consider an element of length dl of the wire at a distance l from point O and \(\vec{r}\) be the vector joining the element dl with the point P. Let θ be the angle between dl and \(\vec{r}\) Then, the magnetic field at P due to the element is
\(d \overrightarrow{\mathrm{B}}=\frac{\mu_{0} \mathrm{Id} \vec{l}}{4 \pi r^{2}} \sin \theta\) (unit vector perpendicular to \(d \vec{l}\) and \(\vec{r}\) )-(1)
The direction of the field is perpendicular to the plane of the paper and going into it. This can be determined by taking the cross product between two vectors \(d \vec{l}\) and \(\vec{r}\) (let it be n̂). The net magnetic field can be determined by integrating equation with proper limits.
\(\vec{B}\) = ∫d\(\vec{B}\)
From the figure, in a right angle triangle PAO, 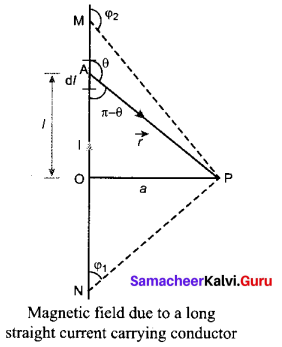 Question 35.
(b) Show that the mutual inductance between a pair of coils is same (M12 = M21).
Answer:
Mutual induction: When an electric current passing through a coil changes with time, an emf is induced in the neighbouring coil. This phenomenon is known as mutual induction and the emf is called mutually induced emf.

Consider two coils which are placed close to each other. If an electric current q is sent through coil i1 the magnetic field produced by it is also linked with coil 2.
Let Φ21 be the magnetic flux linked with each turn of the coil 2 of N2 turns due to coil 1, then the total flux linked with coil 2 (N2Φ21) is proportional to the current i1 in the coil 1.
N2Φ21 ∝ i1
N2Φ21 = M21i1 or M21 = \(\frac{N_{2} \Phi_{21}}{i_{1}}\)
The constant of proportionality M21 is the mutual inductance of the coil 2 with respect to coil 1. It is also called as coefficient of mutual induction. If i1 = 1 A, then M21 = N2Φ21.
Therefore, the mutual inductance M21 is defined as the flux linkage of the coil 2 when 1A current flows through coil 1.
When the current i1 changes with time, an emf ξ2 is induced in coil 2. From Faraday’s law of electromagnetic induction, this mutually induced emf ξ21 is given by

The negative sign in the above equation shows that the mutually induced emf always opposes the change in current with respect to time. If \(\frac{d i_{1}}{d t}\) = 1 As-1, then M21 = -ξ2.
Mutual inductance M21 is also defined as the opposing emf induced in the coil 2 when the rate of change of current through the coil I is l As-1.
Similarly, if an electric current i2 through coil 2 changes with time, then emf ξ1 is induced in coil 1. Therefore, N 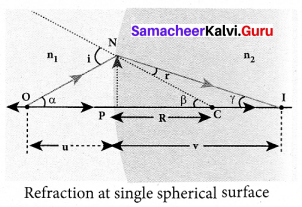 (i) Thermionic emission:
When a metal is heated to a high temperature, the free electrons on the surface of the metal get sufficient energy in the form of thermal energy so that they are emitted from the metallic surface. This type of emission is known as thermionic emission.

The intensity of the thermionic emission (the number of electrons emitted) depends on the metal used and its temperature. 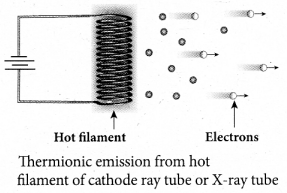 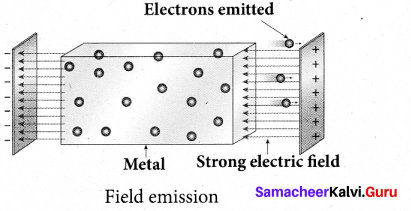 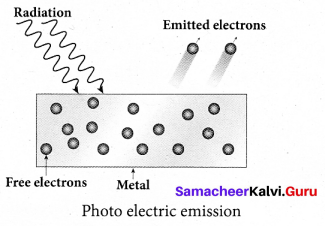 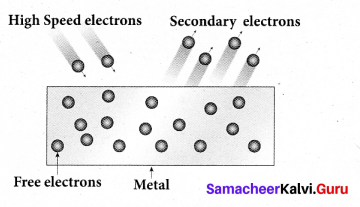 Question 37.
(a) Discuss the spectral series of hydrogen atom.
Answer:
The spectral lines of hydrogen are grouped in separate series. In each series, the distance of separation between the consecutive wavelengths decreases from higher wavelength to the lower wavelength, and also wavelength in each series approach a limiting value known as the series limit. These series are named as Lyman series. Balmer series, Paschen series, Brackett series, Pfund series, etc. The wavelengths of these spectral lines perfectly agree with the equation derived from Bohr atom model.
\(\frac{1}{\lambda}=\mathrm{R}\left(\frac{1}{n^{2}}-\frac{1}{m^{2}}\right)=\bar{v}\) …… (1)
where ν̂ is known as wave number which is inverse of wavelength, R is known as Rydberg constant whose value is 1.09737 × 107 m-1 and m and n are positive integers such that m > n. The various spectral series are discussed below:

De Morgan’s Second Theorem:
The second theorem states that the complement of the product of two inputs is equal to the sum of its complements.

The signal shown in figure (a) is the message signal or baseband signal that carries information, figure (b) shows the high frequency carrier signal and figure (c) gives the amplitude modulated signal. We can see clearly that the carrier wave is modified in proportion to the amplitude of the baseband signal.
Amplitude Modulation 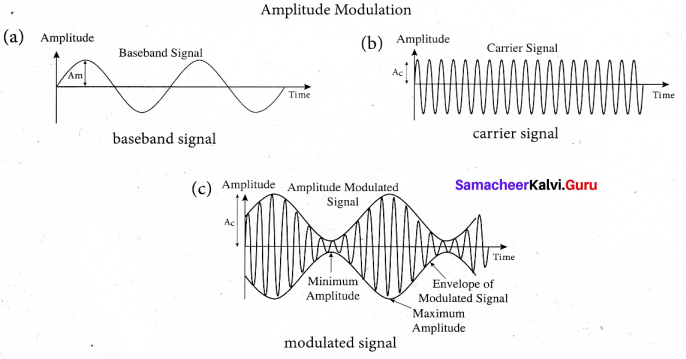 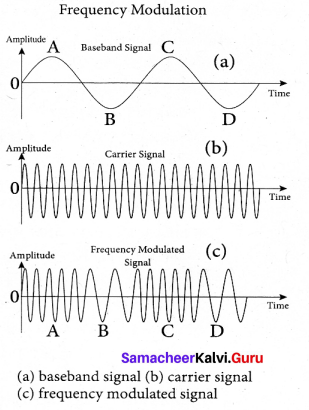 On the other hand, the negative half cycle of the baseband signal produces a phase lag in the carrier signal. This appears to have stretched the frequency of the carrier wave. Hence similar to frequency modulated wave, phase modulated wave also comprises of
compressions and rarefactions. When the signal voltage is zero (A, C and E) the carrier frequency is unchanged. 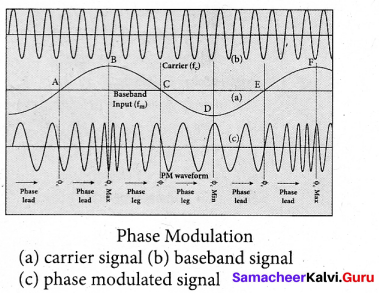 Question 38.
(b) Elaborate any two types of Robots with relevant examples.
Answer:
(i) Human Robot:
Certain robots are made to resemble humans in appearance and replicate the human activities like walking, lifting, and sensing, etc.

Six-axis robots are ideal for: