Question 4.
Three wires of equal lengths are bent in the form of loops. One of the loops is circle, another is a semi-circle and the third one is a square. They are placed in a uniform magnetic field and same electric current is passed through them. Which of the following loop configuration will experience greater torque ?
(a) circle
(b) semi-circle
(c) square
(d) all of them
Answer:
(a) circle

Question 6.
The current flowing in a coil varies with time as shown in ® the figure. The variation of induced emf with time would be …………….. .

Question 18.
State Coulomb’s inverse law.
Answer:
The force of attraction or repulsion between two magnetic poles is directly proportional to the product of their pole strengths and inversely proportional to the square of the distance between ‘ them.
\(\overrightarrow{\mathrm{F}} \propto \frac{q_{m_{\mathrm{A}}} q_{m_{b}}}{r^{2}} \hat{r}\)

Question 19.
State Lenz’s law.
Answer:
Lenz’s law states that the direction of the induced current is such that it always opposes the cause responsible for its production.

Question 22.
Define impact parameter.
Answer:
The impact parameter is defined as the perpendicular distance between the centre of the gold nucleus and the direction of velocity vector of alpha particle when it is at a large distance.

Question 24.
What do you mean by Internet of Things?
Answer:
Internet of Things (IoT), it is made possible to control various devices from a single device. Example: home automation using a mobile phone.

Question 30.
State the laws of refraction.
Answer:
Law of refraction is called Snell’s law.
Snell’s law states that,
(a) The incident ray, refracted ray and normal to the refracting surface are all coplanar (i.e. lie in the same plane).
(b) The ratio of angle of incident i in the first medium to the angle of reflection r in the second medium is equal to the ratio of refractive index of the second medium n2 to that of the refractive index of the first medium n1.
\(\frac{\sin i}{\sin r}=\frac{n_{2}}{n_{1}}\)

Since me < mp , Kp < Ke, the electron has more kinetic energy than the proton.

Since me < mp νp < νe , the electron moves faster than the proton.

Question 32.
In alpha decay, why the unstable nucleus emits 42He nucleus? Why it does not emit four separate nucleons?
Answer:
After all 42He consists of two protons and two neutrons. For example, if 23892U nucleus decays into 23490Th by emitting four separate nucleons (two protons and two neutrons), then the disintegration energy Q for this process turns out to be negative. It implies that the total mass of products is greater than that of parent (23892U) nucleus. This kind of process cannot occur in nature because it would violate conservation of energy. In any decay process, the conservation of energy, conservation of linear momentum and conservation of angular momentum must be obeyed. 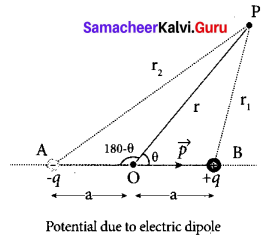 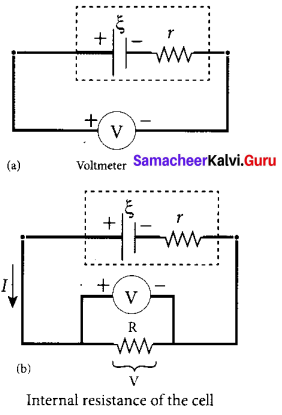 Question 35.
(b) Show mathematically that the rotation of a coil in a magnetic field over one rotation induces an alternating emf of one cycle.
Answer:
Induction of emf by changing relative orientation of the coil with the magnetic field:
Consider a rectangular coil of N turns kept in a uniform magnetic field \(\vec{B}\) figure (a). The coil rotates in anti-clockwise direction with an angular velocity co about an axis, perpendicular to the field.

At time = 0, the plane of the coil is perpendicular to the field and the flux linked with the coil has its maximum value Φm = BA (where A is the area of the coil).

In a time t seconds, the coil is rotated through an angle θ (= ωt) in anti-clockwise direction. In this position, the flux linked is Φm cos ωt., a component of Φm normal to the plane of the coil (figure (b)). The component parallel to the plane (Φm sinωt) has no role in electromagnetic induction. Therefore, the flux linkage at this deflected position is NΦB = NΦm cos ωt. According to Faraday’s law, the emf induced at that instant is

ε = \(-\frac{d}{d t}\) (NΦB) = \(-\frac{d}{d t}\) (NΦm cos ωt)
= -NΦm (-sin ωt)ω = NΦm ω sin ωt
When the coil is rotated through 90° from initial position, sin ωt = 1. Then the maximum value of induced emf is
εm = NΦm ω = NBAω since Φm = BA
Therefore, the value of induced emf at that instant is then given by
ε = εm sin ωt
It is seen that the induced emf varies as sin ωt function of the time angle ωt. The graph between induced emf and time angle for one rotation of coil will be a sine curve and the emf varying in this manner is called sinusoidal emf or alternating emf.

5. The speed of electromagnetic wave is less than speed in free space or vacuum, that is, v < c. In a medium of refractive index, 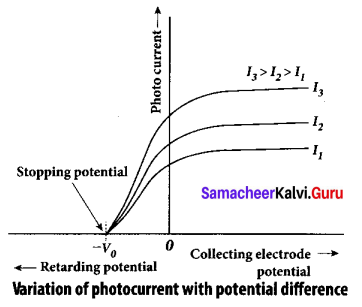 When a negative (retarding) potential is applied to A with respect to C, the current does not immediately drop to zero because the photoelectrons are emitted with some definite and different kinetic energies. .

The kinetic energy of some of the photoelectrons is such that they could overcome the retarding electric field and reach the electrode A.

When the negative (retarding) potential of A is gradually increased, the photocurrent starts to decrease because more and more photoelectrons are being repelled away from reaching the electrode A. The photocurrent becomes zero at a particular negative potential V0 , called stopping or cut-off potential.

Stopping potential is that the value of the negative (retarding) potential given to the collecting electrode A which is just sufficient to stop the most energetic photoelectrons emitted and make the photocurrent zero.

At the stopping potential, even the most energetic electron is brought to rest. Therefore, the initial kinetic energy of the fastest electron (Kmax) is equal to the work done by the stopping potential to stop it (eV0).
Kmax = \(\frac { 1 }{ 2 }\) mv2maxK = eV0 ……… (1)
where vmax is the maximum speed of the emitted photoelectron.

From the graph, when the intensity of the incident light alone is increased, the saturation current also increases but the value of V0 remains constant.

Question 37.
(b) Explain the J.J. Thomson experiment to determine the specific charge of electron.
Answer:
In 1887, J. J. Thomson made remarkable improvement in the scope of study of gases in discharge tubes. In the presence of electric and magnetic fields, the cathode rays are deflected. By the variation of electric and magnetic fields, mass normalized charge or the specific charge (charge per unit mass) of the cathode rays is measured.

A highly evacuated discharge tube is used and cathode rays (electron beam) produced at cathode are attracted towards anode disc A. Anode disc is made with pin hole in order to allow only a narrow beam of cathode rays. These cathode rays are now allowed to pass through the parallel metal plates, maintained at high voltage. Further, this gas discharge tube is kept in between pole pieces of magnet such that both electric and magnetic fields are perpendicular to each other. When the cathode rays strike the screen, they produce scintillation and hence bright spot is observed. This is achieved by coating the screen with zinc sulphide. 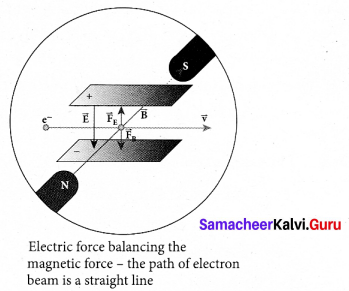 Let y be the deviation produced from Deviation of path by applying uniform electric field original position on the screen. Let the initial upward velocity of cathode ray be u = 0 before entering the parallel electric plates. Let t be the time taken by the cathode rays to travel in electric field. Let l be the length of one of the plates, then the time taken is
t = \(\frac{1}{v}\) …(5)
Hence, the deflection y’ of cathode rays is (note: u = 0 and ae = \(\frac{e}{m}\)E)

(iv) Deflection of charge only due to uniform magnetic field
Suppose that the electric field is switched off and only the magnetic field is switched on. Now the deflection occurs only due to magnetic field. The force experienced by the electron in uniform magnetic field applied perpendicular to its path is
Fm = evB (in magnitude)
Since this force provides the centripetal force, the electron beam undergoes a semicircular path. Therefore, we can equate Fm to centripetal force \(\frac{m v^{2}}{R}\)
Fm = evB = \(m \frac{v^{2}}{R}\)
where v is the velocity of electron beam at the point where it enters the magnetic field and R is the radius of the circular path traversed by the electron beam.
eB = \(m \frac{v}{\mathrm{R}} \Rightarrow \frac{e}{m}=\frac{v}{\mathrm{BR}}\) ……. (9)
Further, substituting equation (1) in equation (9), we get
\(\frac{e}{m}=\frac{E}{B^{2} R}\) …….. (10)
By knowing the values of electric field, magnetic field and the radius of circular path, the value of specific charge \(\left(\frac{e}{m}\right)\) can be calculated

The output of the half wave rectifier is not a steady dc voltage but a pulsating wave. This pulsating voltage is not sufficient for electronic equipments. A constant or a steady voltage is required which can be obtained with the help of filter circuits and voltage regulator circuits. Efficiency (η) is the ratio of the output dc power to the ac input power supplied to the circuit. Its value for half wave rectifier is 40.6 %

Question 38.
(b) Fiber optic communication is gaining popularity among the various transmission media – justify.
Answer:
The method of transmitting information from one place to another in terms of light pulses through an optical fiber is called fiber optic communication. It is in the process of replacing wire transmission in communication systems.
Light has very high frequency (400 THz – 790 THz) than microwave radio systems. The fibers are made up of silica glass or silicon dioxide which is highly abundant on Earth.
Now it has been replaced with materials such as chalcogenide glasses, fluoroaluminate crystalline materials because they provide larger infrared wavelength and better transmission capability.
As fibers are not electrically conductive, it is preferred in places where multiple channels are to be laid and isolation is required from electrical and electromagnetic interference.