By understanding the academic needs we have prepared the Tamilnadu State Board Class 10 Social Science Geography Solutions Chapter Wise. Samacheer Kalvi 10th Social Science Geography Solutions Chapter 7 Human Geography of Tamil Nadu Questions and Answer. There are 4 parts in Social Science we have provided the topics according to the parts. You can Download Samacheer Kalvi 10th Social Science Book Solutions Guide Pdf, Tamilnadu State Board help you to revise the complete Syllabus and score more marks in your examinations. Before you start your preparation go through the chapters covered in this academic. Our aim is to help the students by providing the question and answers chapter wise and help them to gain a good score in the exams.

Question 2.
Second staple food of the people of Tamil Nadu is:
(a) Pulses
(b) Millets
(c) Oilseeds
(d) Rice
Answer:
(b) Millets

1. Agriculture of Tamil Nadu constitutes …………….. % of its economy.
2. Sathanur dam is constructed across the river …………..
3. Tamil Nadu ranks …………….. in India with a share of over 20% in total road projects under operation in the Public – Private Partnership (PPP).
4. ………….. is the third largest airport in India after Mumbai and Delhi.
5. The difference between the value of exports and imports is called ………….
Answers:
1. 21
2. Thenpennai
3. Second
4. Chennai International Airport
5. Balance of trade

V. Answer the following in briefly.

Question 4.
What is MRTS?
Answer:

Question 6.
Have you heard about any stampede in your district? write about that incident briefly.
Answer:
During Athivaradhar festival minor stampede that brokeout on Thursday (18th July 2019) the crowd flocked to Kancheepuram as it was an auspicious day after the lunar eclipse. Four people died.

On 21st April 2019 atleast seven people died in stampede in Tamil Nadu during a temple festival at Muthuaiyampalayam Karuppusamy temple in Thuraiyur a village near Trichy (Sunday).

VI. Distinguish between the following.

VII. Give reasons for the following

Question 2.
Cities are densely populated than the villages.
Answer:
Agriculture, job opportunities and industrial development are the main causes of population density in the cities then the villages.

Question 4.
Mostly stampede occurs in Temples.
Answer:
Most of the religious festivals are located in areas like banks of rivers hilly terrains or mountain tops. These areas lack proper pathways, posing a geographical risk to the pilgrims. It often disrupts the orderly movement of crowds resulting in irrational and dangerous movement for self-protection, leading to injuries and fatalities. Because of the lack of physical infrastructure, the mob behaviour increases the sense of threat, which results in a stampede.

VIII. Answer the following in a paragraph.

The hill slopes with laterite soil and acidic-nature is ideal for the plantation crops.

Tea: Tea plantations are found in the hills of the Nilgins and Coimbatore. Notable region for tea estates Nilgiris.

Coffee: Coffee plants are grown in the hills of Western Ghats as well as Eastern Ghats. It is also found in the hilly slopes of Dindigui, Madurai, Theni and Salem districts.
Notable places: Yercaud, Kolli hills and Kodaikanal,

Cashew: It is extensively cultivated in Cuddalore district.

Pepper: Confined to the warm and wet slopes of Eastern and Western Ghats of Tamil Nadu.

Cinchona: It is planted at heights varying from 1060 to 1280 metres in Anaimalai hills.

Cardamom: Cardamom estates are located at few places in the hills of Madurai region at an elevation of 915 to 1525 metres.

Position: Tamil Nadu stands second in area and production of tea and coffee next to Assam and Karnataka respectively.

Question 2.
Give an account on water resources of Tamil Nadu.
Answer:

Question 3.
Bring out the mineral distribution in Tamil Nadu.
Answer:
(i) Tamil Nadu is the leading holder of country’s resources of vermiculite, magnetite, dunite, rutile, garnet, molybdenum and ilmenite.

(ii) The state accounts for the country’s 55.3% of lignite, 75% of vermiculite, 69% of dunite, 59% of garnet, 52% of molybdenum and 30% of titanium mineral resources.
Important minerals are found in the state are as follows:

Question 4.
State the densely populated regions of Tamil Nadu and account for its high density.
Answer:

Question 5.
Explain the different modes of transport available in Tamil Nadu.
Answer:
Roadways:
The State has a total road length of 167,000 km, In which 60,628km are maintained by state Highways Department. It ranks second in India with a share of over 20% in total road projects under operation in the Public-Private Partnership (PPP) model. 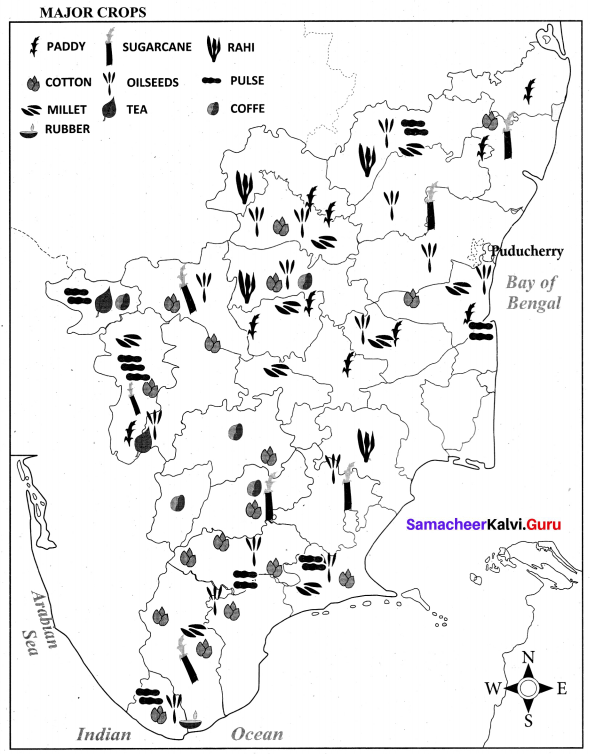 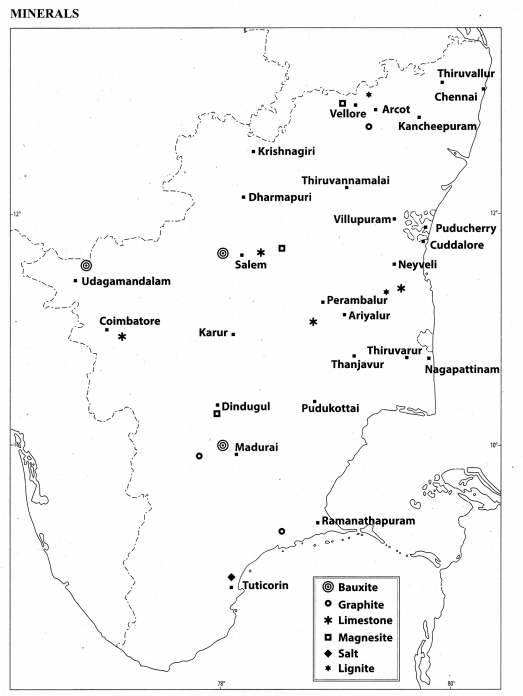 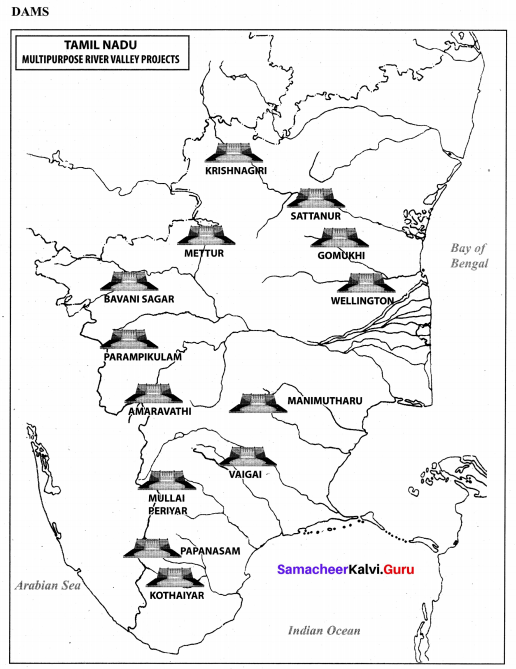 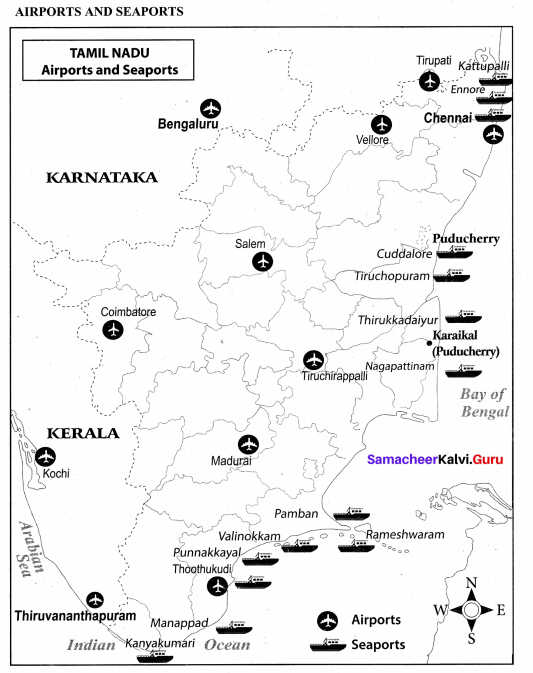 Question 7.
Which is known as the Textile capital of Tamil Nadu?
(a) Salem
(b) Karur
(c) Tirunelveli
Answer:
(b) Karur

Question 9.
The most populated district in Tamil Nadu is …………….
(a) Madurai
(b) Tiruvallur
(c) Chennai
Answer:
(c) Chennai

Question 1.
What is Agriculture?
Answer:
Agriculture is a practice of farming that includes cultivation of crops, rearing of animals, birds, forestry, fisheries and other related activities.

Question 2.
What is the Multipurpose River Valley Projects?
Answer:
Multipurpose river valley projects are basically designed for the development of irrigation for agriculture and hydropower generation they are used for many other purposes as well.

Question 3.
List out the major food crops and commercial crops of the state.
Answer:

Question 4.
Define Trade.
Answer:
Trade-in an exchange of goods and commodities either within the country or between countries.

Question 7.
What are minor ports?
Answer:
Minor ports are anchorage ports where cargo is transhipped from the vessel to the store.
Ex. Cuddalore, Nagapattinam, Kolachal and Rameshwaram.

Question 8.
What are the uses of Chinchona?
Answer:

Question 1.
Tourism is considered as an industry – justify. Give an account on Tourism in Tamil Nadu.
Answer:

Maximum units are concentrated in and around Coimbatore region for this region it is known as the “Manchester of South India”. Timpur and Erode contributes much for the state economy, therefore they are referred to as ‘Textile Valley of Tamil Nadu’.

Timpur alone contributes 70% of export of knitwear of Tamil Nadu. Erode specializes in garments and bedspreads. The city of Kamr is known as ‘Textile capital of Tamil Nadu Silk Textiles’. Tamil Nadu occupies fourth place in silk textile production in our country Kancheepuram silk is unique in its quality and is known for its traditional value all over the world. Arani, Rasipuram and Thimbuvanam are other silk centres of Tamil Nadu.

We hope the information prevailed in this article is helpful for all the students of Class 10. The Tamilnadu State Board Samacheer Kalvi Solutions for Class 10 Social Science Geography Chapter 7 Human Geography of Tamil Nadu Questions and Answer pdf enhance your skills and score good marks in the exams. Stay tuned to get the latest information about the Samacheer Kalvi 10th Social Science Geography Solutions Chapter 7 Human Geography of Tamil Nadu.