By understanding the academic needs we have prepared the Tamilnadu State Board Class 10 Social Science History Solutions Chapter Wise. Samacheer Kalvi 10th Social Science History Solutions Chapter 3 World War II Questions and Answer. There are 4 parts in Social Science we have provided the topics according to the parts. You can Download Samacheer Kalvi 10th Social Science Book Solutions Guide Pdf, Tamilnadu State Board help you to revise the complete Syllabus and score more marks in your examinations. Before you start your preparation go through the chapters covered in this academic. Our aim is to help the students by providing the question and answers chapter wise and help them to gain a good score in the exams.

Question 8.
Where is the headquarters of the International Court of Justice located?
(a) New York
(b) Chicago
(c) London
(d) The Hague
Answer:
(d) The Hague

1. Hitler attacked ……… which was a demilitarised zone.
2. The alliance between Italy, Germany and Japan is known as ……..
3. ……… started the Lend Lease programme.
4. Britain Prime Minister …….. resigned in 1940.
5. Saluting the bravery of the ………. Churchill said that “Never was so much owed by so many to so few”.
6. is a device used to find out the enemy aircraft from a distance.
7. ………. The Universal Declaration of Human Rights set forth fundamental human rights in articles.
8. After the World War II ……… was voted into power in Great Britain.
Answers:
1. Rhineland
2. Axis power
3. US – President Roosevelt
4. Chamberlain
5. British Royal airforce
6. Radar
7. 30
8. Labour party

Question 3.
How did Hitler get support from the people of Germany?
Answer:
Hitler was well aware of the discontent among the Germans. He used his oratorical skills to sway the common people and promised them to return the glorious military past of Germany. He founded the National Socialist Party, generally known as “the Nazis”. The fundamental platform on which Hitler built his support was the notion of the racial superiority of the Germans as a pure. ‘Aryan’ race and a deep-seated hatred of the Jews.

Hitler came to power in 1933 and ruled Germany for twelve long years.

Question 4.
Describe the Pearl Harbour incident.
Answer:
America had installed strong naval base in Pearl harbour, Hawaii on December 1941, Japan attacked America’s pacific fleet without any warning. Japan’s idea was to cripple America so that they can freely move towards South-east Asian countries. But, when many battle ships and numerous fighter planes were destroyed, the U.S.A. declared war on Japan.

Question 5.
What do you know of Beveridge Report?
Answer:
In 1942, a report commonly known as the Beveridge Report was published in the United Kingdom. The report proposed a series of measures which the government should adopt to provide citizens with adequate income, health care, education, housing and employment to overcome poverty and disease which were the major impediments to general welfare.

VI. Answer the questions given under each caption.

(d) What is the significance of the Battle of Stalingrad?
Answer:
The people of Russia successfully defended the city of Stalingrad. It stopped the German advance into the Soviet Union and favoured the allies. It was a great patriotic war by the Russians.

(d) What happened to the Indians living in Burma?
Answer:
Many Indians walked all the way from Burma to the Indian border, facing hardships. Many died of disease and exhaustion. Those who remained suffered under the Japanese.

(b) What is the Holocaust?
Answer:
Holocaust refers to World’s worst ever genocide of killing nearly six million Jews by the Germans during the Second World War.

(d) What is meant by veto?
Answer:
Veto is an constitutional right to reject a decision or proposal made by a law making body. Each of the permanent members of the UNO has the right of veto.

Question 1.
Attempt an essay on the rise and fall of Adolf Hitler.
Answer:
Hitler was great orator. He swayed the people by his impassioned speeches, promising a return to the glorious military past of Germany. He founded the National Socialist Party, known as ‘the Nazis’. He came to power in 1933 and ruled Germany till 1945, with a small group of fanatic followers. He rearmed Germany. He made huge expenditure on the recruitment of armed forces and the manufacture of armaments and machinery for the army, navy and air force. Soon the economic condition of Germany got strengthened and the problem of unemployment came to an end. In 1938, Hitler invaded Austria and Czechoslovakia. Sudetenland in Czechoslovakia was German-speaking, and Hitler’s claim was that the German-speaking people should be united in one nation. Though Hitler gave an assurance in the Munich Pact that Germany would not attack any other country, but this was broken immediately.

In 1939, he invaded Czechoslovakia. Poland was attacked next, and this was the final act which resulted in declaration of war by Britain and France against Germany. In June 1940, Italy joined Germany, and in September 1940, Japan also joined the Axis Powers. The German army followed a tactic of ‘lightning strike’ to storm into various countries and overrun them. In June 1941, German army invaded Russia and remained successful in the initial years. But ultimately got defeated due to the resistance by Soviet army, and the fierce Russian winter. In the Battle of Alamein 1942, the Allied forces counter-attacked and defeated the German and Italian forces in North Africa. The German army was chased across the desert, out of North Africa. The war continued till Hitler’s suicide in April 1945.

Question 2.
Analyse the effects of World War II.
Answer:
The long term effects of II World War were mostly unpleasant but a little platform of cherishment to the colonies by way of extending them independence. The radiation from the atom bombs were not clearly estimated at the time of war.

New geo-political power alignment: The world got itself split into two new political super powers. One led by the United States with anti-communist ideas and the other one led by Soviet Russia with communist ideas.

Nuclear proliferation: The United States and the Soviet Union built large stock of nuclear powered weapons. This was just like a race between them. Britain and France also joined in the race. More and more resources were spent by the countries for destructive purposes.

Independence of the colonies: Colonial powers were forced to give independence.

Empowerment of Women: Women power entered into the labour force in great numbers. There was a change in social relations and more and more women become economically independent.

Question 3.
Assess the structure and activities of the UN.
Answer:
The United Nations came into existence in the year 1945 to achieve lasting peace among all nations which were inter-dependent. It functions like any government, through its principal organs which are similar to the legislative, executive and judicial wings of a state.

Activities of the United Nations

Human rights, the problems of refugees, climate change, gender equality are all within the ambit of the activities of the United Nations. The UN Peace-keeping force has acted in many areas of conflict all over the world.

Question 1.
Group project involving students to prepare an album with pictures on different phases of the World War II.
Answer:
You can do this activity under the guidance of your teacher.

Question 2.
A debate in the class on the success or failure of the UN in preserving World Peace.
Answer:
You can do this activity by discussing the points in the class under the guidance of your teacher.

Question 3.
Marking the Allies and Axis countries, as well as important battlefields of World War II in a world map.
Answer: 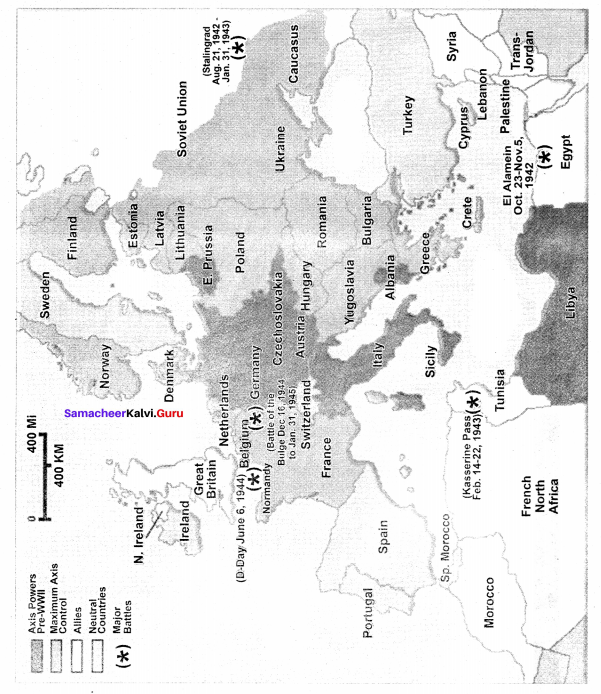 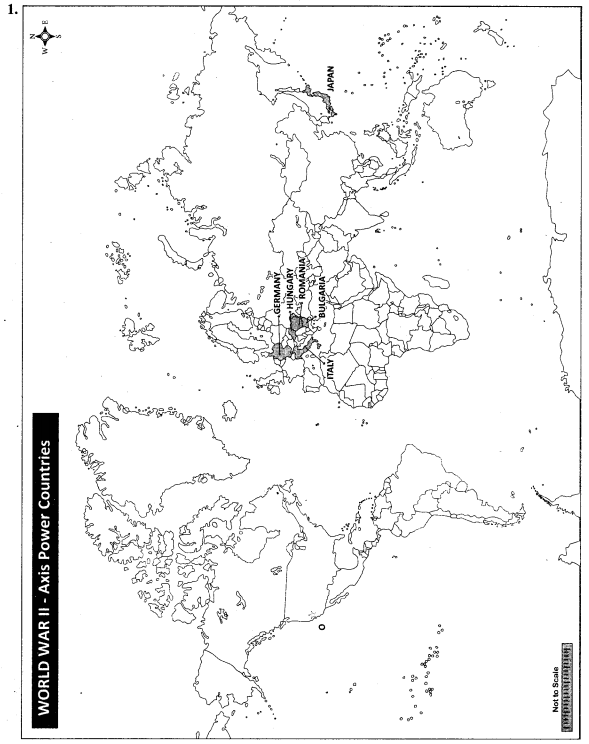 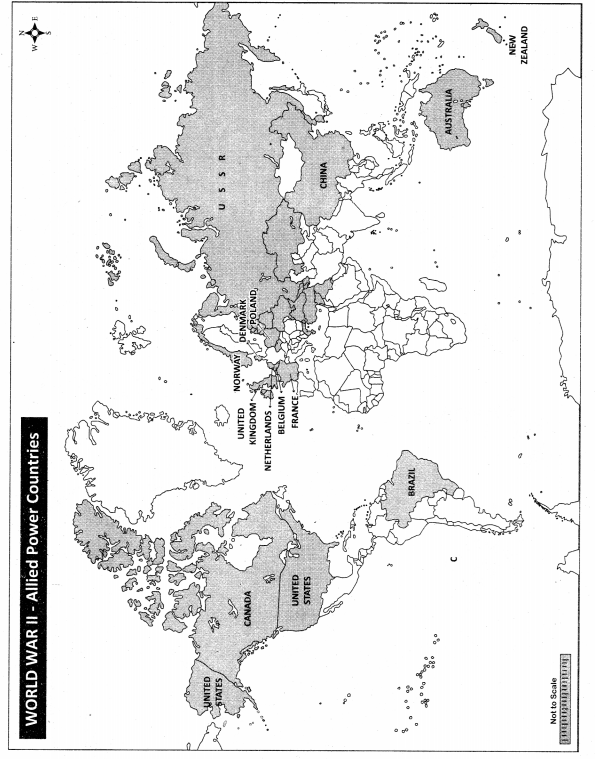 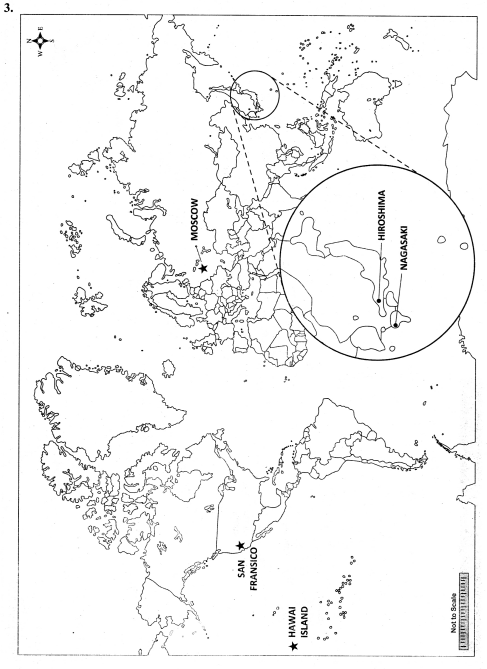 Question 2.
The Dictator of Spain was called:
(a) Mussolini
(b) Franco
(c) Hitler
(d) Edi-Amin
Answer:
(b) Franco

Question 3.
The country emerged as a World power after the First World war was ………
(a) China
(b) India
(c) Japan
Answer:
(c) Japan

Question 9.
Hitler signed the Non-Aggression pact with ……………
(a) Gorbachev
(b) Stalin
(c) Lenin
Answer:
(b) Stalin

Question 1.
How did Japan sowed the seeds for Second World War?
Answer:

Question 2.
List down the important organs of the UN.
Answer:

Question 3.
What was the immediate cause of the Second World War?
Answer:

Question 4.
What are the principal organs of the UNO?
Answer:

Question 6.
What is meant by “Lend-Lease”?
Answer:
President Roosevelt of U.S.A. brought the Lend-Lease programme in 1941. Arms, food, military equipment, other supplies were sent to power in the name of loan which would be returned after use.

Question 7.
What were the main objectives of the UNO?
Answer:

Question 9.
Mention any two major achievements of the UNO.
Answer:

Question 10.
What is meant by the Holocaust?
Answer:
The word ‘Holocaust’ refers to the mass killing of nearly six million jews by the Germans during II World War. This was done because the Nazis completely want to exterminate jews completely from Germany and all other countries where they are.

Question 11.
Name the five permanent members of the security council.
Answer:
The USA, the UK, the France, the Russian Federation and the China.

(b) What did he do to bring back glorious Germany?
Answer:
He began to re-arm Germany. The recruitment of the armed forces, new armaments and machinery for the army, navy and air force.

(c) What was the name of the alliances he had with Japan and Italy?
Answer:
Rome-Berlin-Tokyo axis.

(b) With whom did they join?
Answer:
They joined with the secret underground French forces.

(c) What did Hitler do?
Answer:
He committed suicide.

(a) What are the axis powers?
Answer:
Germany, Italy and Japan.

(b) What is the significance of Blitzkrieg?
Answer:
Blitzkrieg means lightning strike which was the tactic followed by Germany to storm into various countries and over run them.

(d) How did British and French Saved their soldiers at the Battle of Dunkrik?
Answer:
British saved their men by calling all those who had boats/small ship and put them into use.The French formed the nucleus of their army.

(iii) Earlier, the IBRD was funding only for the reconstruction activities of the European countries after World War II. Later, its work expanded to promote economic development for poor countries and development projects for developing countries.

(iv) The Bank also works on the key areas like poverty alleviation, and other basic issues of the Societies of the World. The International Development Agency (IDA): It lends money to the governments for developmental activities.

The International Development Agency (IDA): It lends money to the governments for developmental activities.

These loans are given at low rate of interest and for 50 long years. Therefore they are called as soft loans.

The International Labour Office: Is located in Geneva, Switzerland. It works on issues related to Labour and employment.

Question 2.
What are the major achievements of the UNO?
Answer:

We hope the information prevailed in this article is helpful for all the students of Class 10. The Tamilnadu State Board Samacheer Kalvi Solutions for Class 10 Social Science History Chapter 3 World War II Questions and Answer pdf enhance your skills and score good marks in the exams. Stay tuned to get the latest information about the Samacheer Kalvi 10th Social Science History Solutions Chapter 3 World War II.