By understanding the academic needs we have prepared the Tamilnadu State Board Class 10 Social Science History Solutions Chapter Wise. Samacheer Kalvi 10th Social Science History Solutions Chapter 4 The World after World War II Questions and Answer. There are 4 parts in Social Science we have provided the topics according to the parts. You can Download Samacheer Kalvi 10th Social Science Book Solutions Guide Pdf, Tamilnadu State Board help you to revise the complete Syllabus and score more marks in your examinations. Before you start your preparation go through the chapters covered in this academic. Our aim is to help the students by providing the question and answers chapter wise and help them to gain a good score in the exams.

Question 1.
Write any three causes for the Chinese Revolution of 1911.
Answer:

Question 3.
Write a note on Mao’s Long March.
Answer:
By 1933, Mao had gained full control of the Communist party of China. In 1934, the Communist party army of about 100,000 set out on a long march. The marchers were troubled greatly by Kuomintang forces, unfriendly tribes and local war lords. At last only 20,000 people reached northern Sheni region in 1935, after crossing nearly 6000 miles. By .1937, Mao became the leader of over 10 million people.

Question 4.
What do you know of Baghdad Pact?
Answer:
In 1955, Turkey, Iraq, Great Britain, Pakistan and Iran signed a pact known as Baghdad Pact. In 1958, the United States joined the organisation and therefore it came to be known as the Central Treaty Organisation. The treaty was open to any Arab nation desiring peace and security in the region.

Question 5.
What was Marshall Plan?
Answer:
The Secretary of state of USA George C. Marshall proposed the Marshall plan. The European nations who were affected by World War II will be given administrative and technical assistance, along with shipments of food, fuel and machinery by USA. This would help them for a early recovery and intum help USA to influence them.

Question 6.
The Suez Canal crisis confirmed that Israel had been created to serve the cause of western interests -Elaborate.
Answer:
In 1956, Nasser, the President of Egypt, nationalised Suez Canal. This measure undermined British interests with the failure of diplomacy, Britain and France decided to use force. Israel saw this as an opportunity to open the Gulf of Aqaba to Israeli shipping and put a stop to Egyptian border roads. On 29 October Israels, forces invaded Egypt, Britain used this opportunity to demand that its troops be allowed to occupy the canal zone to protect the canal. When Egypt refused British demand, it was bombed. Britain and France also attached Suez Canal area.

VI. Answer all the questions under each caption.

(a) Name the two military blocs that emerged in the Post-World War II.
Answer:

(b) Who coined the term “Cold War” and who used it first?
Answer:
The term ‘Cold War’ was first coined by the English Writer George Orwell in 1945. Bernard Baruch, the US presidental adviser, was the first to use it in a speech.

(c) How long did the Korean War last?
Answer:
The Korean war lasted for three years.

(c) What were the objectives of NAM?
Answer:
To fight all forms of colonialism and imperialism.

Question 2.
Attempt an essay on the Arab-Israeli wars of 1967 and 1973.
Answer:
The formation of Palestinian Liberation Organisation (PLO) was never friendly to Israel. It came to be attached frequently by Palestinian guerrilla groups based in Syria, Lebanon and Jordan. Israel also made violent retaliation. In November 1966, Israel attacked the village of Al-Sami in the Jordanian West Bank. The death toll in this attack was 18. In April 1967 Israel started air battle with Syria which resulted in the shooting down of six Syrian Mig fighter jet.

In his bid to show Egypt’s support for Syria, Nasser mobilised Egyptian forces in the Sinai, seeking the removal of UN emergency forces stationed there on May 18. On May 22, he closed the Gulf Aqaba to Israeli shifting. On June 5, Israel stoped a sudden pre-emptive air strike that destroyed more than 90 percent of Egypt’s air force on the tarmac. A similar air assault was in capacitated the Syria air force. Within three ways, Israel captured the Gaza Strip and all the Senai Peninsula up to the East Bank of the Suez Canal. On June 7, the Israeli forces drove Jordanian forces out of East Jerusalem and most the West Bank. The War ended when the UN Security Council called for a ceasefire.

Egypt and Syria made a secret agreement in January 1973 to bring their armies under one command. Hafez al-Assad, the President of Syria was keen on retrieving Golan Heights. As Assad was aware that his country’s weapons were dated, he offered the Israelis a peace deal of they would withdraw from Sinai. Israel rejected the offer. Egypt and Syria then launched a sudden attack on the Yom Kippur religions holiday on 6 October 1973. Though Israel suffered heavy casualties, it could finally push back the Arab forces. But this time, due to UN intervention, Israel was forced to return to 1967 position. Arabs gained nothing out of this war too.

Question 3.
Narrate the history of transformation of Council of Europe into an European Union.
Answer:

Question 12.
……………. was an Inter alliance between the countries of North America and Europe.
(a) NATO
(b) Truman doctrine
(c) Marshall plan
(d) SEATO
Answer:
(a) NATO

Question 1.
Write a short note on Mao Tse-tung.
Answer:
Mao was bom in Hunan in South-east China. He came from a wealthy family ,learned man who enrolled himself in teacher’s training college. He supported Manchus. Mao concentrated on strengthening peasants and established People’s Republic of China.

Question 2.
What do you know of Arab nationalism.
Answer:
Since the dawn of the twentieth century, Arab nationalism was growing in Syria and Iraq. Subsequently nationalism became intense in Egypt. In March 1945, the Arab league was formed in Cairo. Its founder members were Egypt, Iraq, Syria, Lebanon, Saudi Arabia, Jordon and Yemen.

Question 4.
What are the principal objectives of the EU?
Answer:

Question 5.
How did the Soviet Union get disintegrated?
Answer:
The East European Communist states under the Soviet umbrella were in a deep economic and social crisis. The division within the ruling group was growing wider. Gorbachev was put into house arrest. Finally he resigned on 25th Dec. and on 31st Dec 1991. It was dissolved.

Question 6.
What is the significance of the EURO?
Answer:

Question 7.
Write a short note on NAM.
Answer:
The Non-Alignment Movement was called in short as NAM. It emerged at the Bandung conference in 1955. Peaceful co-existence, commitment to peace and security, no military alliances were the principles with which NAM operated.

Question 1.
Organs of the EU

(a) Which is the Legislative body of the EU?
Answer:
The European Parliament

(b) Where is the seat of the Court of Justice?
Answer:
Luxemburg

(c) What is the function of the European commission?
Answer:

(d) Who is responsible for the foreign exchange operation?
Answer:
The European central bank.

(a) What type of organisation was PLO?
Answer:
It is a political organisation representing all the Arabs and the descendants who live in Palestine, before the creation of Israel.

(b) What type of war does the PLO engage in?
Answer:
The PLO was engaged in Guerrilla war.

(d) How did his appearance raised world awareness on the political cause?
Answer:
He was wearing a Harley disguised pistol and carrying an olive branch and dressed in a military uniform.

Question 1.
Write a detailed report on the formation of the military alliances.
Answer:
The cold war was not a war with weapons. Rather, a war on Political, economical and ideological fronts.

The countries started making military alliances, so that they would have joint commands with standing forces.

North Atlantic Treaty Organisation: In short, it was called as NATO, by the United States and its European allies to resist the Soviet aggression in Europe.

The main aim of the NATO was to maintain peace and security in the North Atlantic region.

Members agreed if any one of them would be attacked, it would be an attack on NATO.

WARSAW PACT: As a counter to the NATO, Soviet Union organised the Soviet bloc countries, under the Warsaw pact, A Joint command of the armed forces with head quarters a Moscow was set up.

SEATO: South East Asia Treaty Organization was organised for the collective security of the South east Asian countries. Their aim is to prevent communism to gain popularity in their region. It was called as Manila pact.

CENTO: Central Treaty organisation was a pact signed by Iran, Iraq, Turkey, Pakistan, Britain. When USA joined it was called CENTO. Prior to that, it was called as Baghdad pact. It was open to any Arab region seeking peace and security in their region.

Question 2.
What are the achievements of the European Union?
Answer:
Single market:- 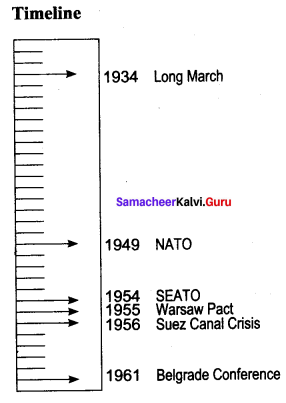 We hope the information prevailed in this article is helpful for all the students of Class 10. The Tamilnadu State Board Samacheer Kalvi Solutions for Class 10 Social Science History Chapter 4 The World after World War II Questions and Answer pdf enhance your skills and score good marks in the exams. Stay tuned to get the latest information about the Samacheer Kalvi 10th Social Science History Solutions Chapter 4 The World after World War II.