By understanding the academic needs we have prepared the Tamilnadu State Board Class 10 Social Science History Solutions Chapter Wise. Samacheer Kalvi 10th Social Science History Solutions Chapter 5 Social and Religious Reform Movements in the 19th Century Questions and Answer. There are 4 parts in Social Science we have provided the topics according to the parts. You can Download Samacheer Kalvi 10th Social Science Book Solutions Guide Pdf, Tamilnadu State Board help you to revise the complete Syllabus and score more marks in your examinations. Before you start your preparation go through the chapters covered in this academic. Our aim is to help the students by providing the question and answers chapter wise and help them to gain a good score in the exams.

Social And Religious Reform Movements In The 19th Century Book Back Answers Question 2.
What was the name of the Samaj founded by Dayanand Saraswati?
(a) Arya Samaj
(b) Brahmo Samaj
(c) Prarthana Samaj
(d) Adi Brahmo Samaj
Answer:
(a) Arya Samaj

Question 3.
Assess the role of Ayyankali in fighting for the cause of “untouchables.”
Answer:
Ayyankali, as a child faced the problems that made him turn into a leader of an anti-caste movement. He fought for the basic rights including access to public spaces and entry to schools. He wore clothes associated with upper castes and rode an ox-cart which was a ban for untouchables on public roads.

Question 4.
Write a note on reforms of Ramalinga Adigal.
Answer:
Ramalinga swamigal emphasised the bonds of responsibility and compassion between living beings. He empressed the view that those who lack compassion for suffering beings are hard hearted, their wisdom clonded. He showed his compassion and mercy on all living beings including plants. He established the Samarasa Vedha Sanmarga Sangam in 1865 and it was renamed in 1872 as ‘Samarasa Suddha Sanmarga Sathya Sangam’ which means ‘Society for pure truth in universal self-hood’. Ramalinga also estabilished a free feeding house for everyone.

Question 5.
What was the impact of Swami Vivekananda’s activist ideology?
Answer:
Vivekananda’s activist ideology breed a sense of confidence among Indians. It kindled the desire for political change among many western-education young Bengal. He advocated that service to humanity is service to God. His ideology allowed the lower caste Hindus to be allowed in the Hindu rituals.

Question 6.
What are the differences between Reformist Movements and Revival Movements?
Answer:
While the reformist movements strived to change the fundamental system and structures of the society, through gradual changes within the existing institutions; revivalist movements tended to revive formers customs or practices and thus take the society back to the glorious past.

Question 8.
Highlight the work done by Jyotiba Phule for the welfare of the poor and the marginalized.
Answer:
Jyotiba Phule worked for the upliftment of depressed classes and the causes of women. He opened orphanges and homes for widows. He opened the first school for ‘untouchable’ in 1852 in Poona. He launched the Satyashodhak Samaj (Truth-Seekers Society) in 1870 to stir the non-Brahman masses to self-respect and ambition. He supported widow remarriage, which was prohibited particularly among high-caste Hindus. His work, Gulamgiri (slavery) is an important work that condemned the inequlities of caste.

Question 9.
What was the impact of lyotheeThassar’s visit to SriLanka.
Answer:
He converted himself to Buddhism. He founded the Sakya Buddhist society at Madras. He believed that the revival of Buddhism could liberate the people from the evil of caste that afflicted the Hindu society. He called the ‘Untouchables, Sathi Petham Atra Dravidar and urged them to register as castelss Dravidians.

VI. Answer all the questions given under each caption:

(iv) Name the college which was later raised to the status of a University?
Answer:
Aligarh Muhammadan Anglo-Oriental College.

(i) What is Jeevakarunya?
Answer:
Ramalinga Adigal showed his compassion and mercy on all living beings including plants . This he called as Jeevakarunya.

(ii) What are the Songs of Grace?
Answer:
His voluminous songs were compiled and published under the title Thiruvarutpa which are called Songs of Grace.

(a) Who were the organizers of this Movement?
Answer:
The Deoband Movement was organised be the orthodox Muslim Ulemas.

(d) Against whom the fatwa was issued by Deoband Ulema?
Answer:
In 1888 Deoband Ulemas issued the fatwa (a religious decree) against Syed Ahmed Khan’s Orgnisation called ‘The United Patriotic Association’ and ‘The Muhammadan Anglo-Oriental Association.

Question 1.
Compare and contrast the contributions of Revivalist Movements with that of Reform Movements.
Answer:

Question 2.
Discuss the circumstances that led to the Reform movements of 19th century.
Answer:

(i) Raja Rammohun Roy was deeply concerned with the prevanting customs of sati, child marriage and polygamy. He advocated the rights of widows to remarry. He wanted – polygamy to end. He raised voice against sati system and forced the Governor-General William Bentinck to abolish this social evil in 1829. He condemned the subjugation of women and opposed the prevailing ideas that women were inferior to men. He strongly advocated education for women.

(ii) Ishwar Chandra Vidyasagar was lead against the burning of widows. He supported the idea of widow remarriage. He played a leading role in promoting education of girls and helped them in setting up a number of schools. He dedicated his entire life for the betterment of the child widows of the Hindu society. He led a movement that resulted in the widows’ Remarriage Reform Act of 1856.

(iii) Jyotiba Phule worked for the cause of women. He opposed child marriage and supported widow remarriage, which was prohibited particularly their lives for the uplift of the depressed classes and women. Jyotiba opened orphanages and homes for widows.

(iv) Swami Dayanand Saraswati said that the prohibition of widow remarriage had no scriptural sanction.

(v) Reformers like R.C. Bhandarkar and Justice Mahadev Govind Ranade devoted themselves to activities such as widow remarriage and improvement of women and depressed classes. M.G. Ranade founded the widow Remarriage Association in 1861.

Question 2.
Name the services rendered by the Arya Samaj.
Answer:

Question 4.
What are the teachings of Vallalar?
Answer:

Question 5.
What are the Islamic Reform movements originated in India and what do they mainly focus on?
Answer:
Scientific society founded of Sir Sayyid Ahmed Khan was his first initiative. Later he founded the Aligarh Movement emphasising education and started Aligarh University. Deoband movement organised by The orthodox Muslim Ulema to spread the spirit of Muslims against un-islamic elements.

Question 9.
What are the Social reforms of Jyotiba Phule?
Answer:

V. Answer all the questions given under each Captions:

(a) When was it founded? Who was its founder?
Answer:
Brahmo Samaj was founded in 1828 by Raja Ram Mohan Roy.

(d) Whow took over the Samaj leadership after the death of its founder?
Answer:
Maharishi Debendranath Tagore, carried on the work of the founder after his death in 1833.

(a) What was the original name of Swamy Dayananda Saraswathi?
Answer:
Mul Shankar

(c) What was his motto?
Answer:
His motto was “Go back to Vedas”.

(d) What did the Samaj advocate?
Answer:
The samaj advocated women education, inter-caste marriage and inter-dining.

(b) How was Vaikundar called by his followers. What was his cult called as?
Answer:
His followers called him respectfully as Ayya (father) and his cult was known as Ayya vazhi (The path of Ayya).

(d) Name the newspaper published by him.
Answer:
Tahzil-ud-Akhlaq

(a) The Foundation of the Brahmo Samaj:
Answer:

(b) Aim of the Brahmo Samaj:
Answer:
To cure Hindu society and religion from all its evils and set it on right footing.

(c) Principle of the Brahmo Samaj:
Answer:
The Brahmo Samaj believed in a ‘Universal religion’ based on the principles of one Supreme God.

Question 2.
Write a note on Social Reformers of Tamil Nadu in the 19th century.
Answer:
Ramalinga Swamigal: Ramalinga Adigal was popularly known as Vallalar. He showed his compassion and mercy on all living beings including plants. This he called as Jeevakarunya. He established Samarasa Vedha Sanmarga Sangam in 1865. He also established a free feeding house for everyone irrespective of caste at Vadalur in 1867. He wrote many songs which were compiled in the name of Thiruvarutpa.

Vaikunda Swamigal: His original name was Mudichudum Perumal which changed as Muthukutty because of the objection by upper class. He calls himself Vaikuntar. He preached the idea of equality and condemned the ’ worship of idols. He was against animal sacrifice in the name of religion. He was against caste differences and wanted social integration of the society.

Iyothee Thassaar: Iyothee Thassar was scholar , writer ,siddha medicine practitioner and also journalist and political activist. He campaigned for the social justice and worked for building up a casteless society and removal of untouchability. He established several schools for untouchables in Tamil Nadu. He published a weekly ‘Oru Paisa Tamilan’ in 1907 and it lasted till 1914. He worked also for the revival of Buddhism. 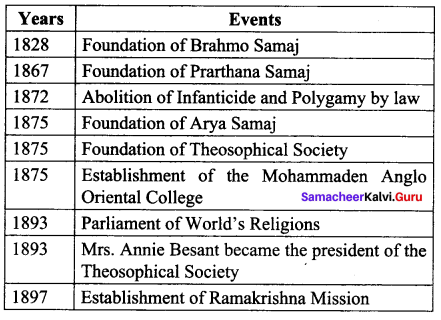