Question 1.
Refer to the given figure and select the correct statement:

Question 6.
Why the cells of sclerenchyma and tracheids become dead?
Answer:

Question 7.
Explain sclereids with their types.
Answer:
Sclereids are dead cells, usually these are isodiametric but some are elongated too. The cell wall is very thick due to lignification. Lumen is very much reduced. The pits may simple or branched. Sclereids are mechanical in function. They give hard texture to the seed coats, endosperms etc., Sclereids are classified into the following types. 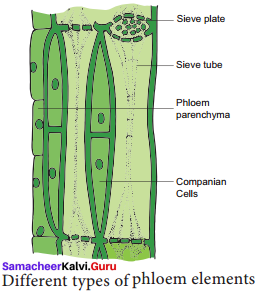 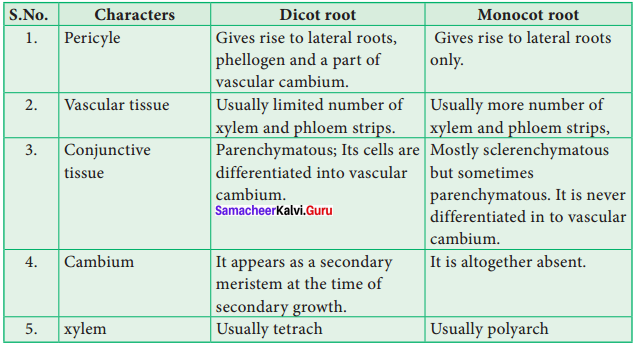 I. Choose the correct answer. (1 Mark)

Question 1.
The National Medal of Science (1989) by the USA was awarded to
a) Nehemiah Grew
b) Katherine Esau
c) Schmidt
d) Clowes
Answer:
b. Katherine Esau

Question 4.
The term meristem is coined by:
(a) Nageli
(b) Robert
(c) Stevers
(d) Clowes
Answer:
(a) Nageli

Question 23.
Which one of the following is short-lived?
a) Proto phloem
b) Meta phloem
c) Primary phloem
d) Secondary phloem
Answer:
a. Proto phloem

Question 38.
The process of guttation is seen in:
(a) grasses
(b) dicot plants
(c) desert plants
(d) Nerium
Answer:
(a) grasses

Question 1.
Define the tissue?
Answer:
A tissue is a group of cells that are alike in origin, structure, and function. The study of tissue is called Histology.

Question 5.
What is mean by carpus?
Answer:
It is the inner zone of shoot apex that forms cortex and stele of the shoot.

Question 7.
What is meant by angular collenchyma?
Answer:
It is the most common type of collenchyma with irregular arrangement and thickening at the angles where cells meet., eg: Hypodermis of Datum and Nicotiana.

Question 8.
What is “Bundle cap” or “Hard bast”?
Answer:
In Dicot stem, in each vascular bundle, a few layers of sclerenchyma cells occur in patches outside the phloem, known as bundle cap or hard bast, providing mechanical strength.

Question 9.
What is Filiform Sclereids?
Answer:
The sclereids are present in the leaf lamina of Olea europaea. They are very much elongated fibre like and about 1mm length.

Question 11.
What is the special significance of radial arrangement in roots?
Answer:

Question 12.
What is meant by endarch type of xylem arrangements?
Answer:
Protoxylem lies towards the .centre and metaxylem towards the periphery this condition is called Endarch. It is seen in stems.

Question 13.
What are the types of cells present in phloem?
Answer:
Phloem consists of four types of Cells:

Question 14.
Define epiblema?
Answer:
It is made up of a single layer of parenchyma cells which are arranged compactly without intercellular spaces. It is devoid of epidermal pores and cuticles. Root hair is always single-celled, it absorbs water and mineral salts from the soil. Another important function of the piliferous layer is protection.

Question 19.
What is meant by Casparian strips?
Answer:
In true root endodermis, radial and inner tangential walls of endodermal cells possess thickenings of lignin, suberin, and some other carbohydrates in the form of strips they are called Casparian strips.

Question 20.
What are albuminous cells?
Answer:
The cytoplasmic nucleated parenchyma is associated with the sieve cells of Gymnosperms. Albuminous cells in Conifers are analogous to companion cells of Angiosperms. It also called Strasburger cells.

Question 21.
Write down the function of Collenchyma
Answer:

Question 22.
Define stele?
Answer:
All the tissues inside the endodermis comprise the stele. This includes pericycle, vascular system, and pith.

Question 23.
What is meant by cambium?
Answer:
Cambium consists of brick-shaped and thin-walled meristematic cells. It is one to four layers in thickness. These cells are capable of forming new cells during secondary growth.

Question 24.
Define silica Cells?
Answer:
Some of the epidermal cells of the grass are filled with silica. They are called silica cells.

Question 25.
What is piliferous layer?
Answer:

Question 1.
Explain apical cell theory.
Answer:
Apical cell theory is proposed by Hofmeister (1852) and supported by Nageli (1859). A single apical cell is a structural and functional unit. This apical cell governs the growth and development of the whole plant body. It is applicable in Algae, Bryophytes, and in some Pteridophytes.

Question 4.
Explain the term “sclereids”.
Answer:
Sclereids are dead cells, usually these are isodiametric but some are elongated too. The cell wall is very thick due to lignification. Lumen is very much reduced. The pits may simple or branched. Sclereids are mechanical in function. They give hard texture to the seed coats, endosperms etc.

Question 5.
Explain briefly about plant fibres.
Answer:
Fibres are very much elongated sclerenchyma cells with pointed tips. Fibres are dead cells and have lignified walls with narrow lumen. They have simple pits. They provide mechanical strength and protect them from the strong wind. It is also called supporting tissues. Fibres have a great commercial value in cottage and textile industries.

Question 6.
Write briefly about xylem fibres.
Answer:
The fibres of sclerenchyma associated with the xylem are known as xylem fibres. Xylem fibres are dead cells and have lignified walls with narrow lumen. They cannot conduct water but being stronger provide mechanical strength. They are present in both primary and secondary xylem. Xylem fibres are also called libriform fibres.
The fibres are abundantly found in many plants. They occur in patches, in continuous bands and sometimes singly among other cells. Between fibres and normal tracheids, there are many transitional forms which are neither typical fibres nor typical tracheids. The transitional types are designated as fibre – tracheids. The pits of fibre – tracheids are smaller than those of vessels and typical tracheids.

Question 10.
What is the significance of companion cells.
Answer:

Question 11.
Explain the term trichomes.
Answer:
There are many types of epidermal outgrowths in stems. The unicellular or multicellular appendages that originate from the epidermal cells are called trichomes. Trichomes may be branched or unbranched and one or more one celled thick. They assume many shapes and sizes. They may also be glandular (eg: Rose, Ocimum) or non – glandular.

Question 13.
What is meant by pith?’
Answer:
The central part of the ground tissue is known as pith or medulla. Generally this is made up of thin walled parenchyma cells with intercellular spaces. The cells in the pith generally stores starch, fatty substances, tannins, phenols, calcium oxalate crystals, etc.

Question 14.
What is the main cause of guttation in plants?
Answer:

Question 15.
What is meant by stele in plant stem?
Answer:
The central part of the stem inner to the endodermis is known as stele. It consists of pericyle, vascular bundles and pith. In dicot stem, vascular bundles are arranged in a ring around the pith. This type of stele is called eustele.

Question 17.
Explain the mesophyll layer of the leaf.
Answer:
The ground tissue that is present between the upper and lower epidermis of the leaf is called mesophyll. Here, the mesophyll is not differentiated into palisade and spongy parenchyma. All the mesophyll cells are nearly isodiametric and thin walled. These cells are compactly arranged with limited intercellular spaces. They contain numerous chloroplasts.

Question 1.
Explain Histogen theory, Korper Kappe Theory and Quiescent Centre Concept with diagrams.
Answer:
Histogen Theory: Histogen theory is proposed by Hanstein (1868) and supported by Strassburger. The histogen theory as appilied to the root apical meristem speaks of four histogen in the meristem. They are respectively

Korper Kappe Theory: Korper kappe theory is proposed by Schuepp. There are two zones in root apex – Korper and Kappe.

This theory is equivalent to tunica corpus theory of shoot apex.The two divisions are distinguished by the type of T (also called Y divisions). Korper is characterised by inverted T division and kappe by straight T divisions.

Quiescent Centre Concept: Quiescent centre concept was proposed by Clowes (1961) to explain root apical meristem activity. These centre is located between root cap and differentiating cells of the roots. The apparently inactive region of cells in root promeristem is called quiescent centre. It is the site of hormone synthesis and also the ultimate source of all meristematic cells of the meristem. 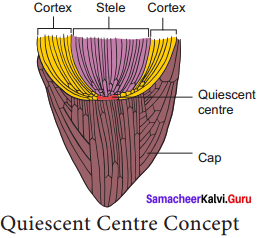 Question 2.
Describe the structure and function of different kinds of parenchyma tissues?
Answer: 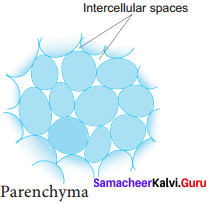 Parenchyma is generally present in all organs of the plant. It forms the ground tissue in a plant. Parenchyma is living tissue and made up of thin-walled cells. The cell wall is made up of cellulose. Parenchyma cells may be oval, polyhedral, cylindrical, irregular, elongated, or armed. Parenchyma tissue normally has prominent intercellular spaces. Parenchyma may store various types of materials like water, air, ergastic substances. It is usually colourless. The turgid parenchyma cells help in giving rigidity to the plant body. Partial conduction of water is also maintained through parenchymatous cells. Occasionally Parenchyma cells which store resin, tannins, crystals of calcium carbonate, calcium oxalate are called idioblasts. Parenchyma is of different types and some of them are discussed as follows.

Types of parenchyma:
(i) Aerenchyma: Parenchyma which contains air in its intercellular spaces. It helps in aeration and buoyancy.
eg: Nymphae and Hydrilla. 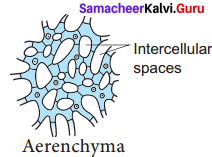 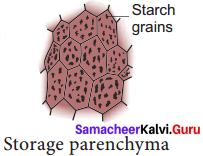 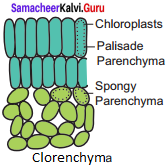 Question 3.
Describe the types of tracheids with a diagram.
Answer: 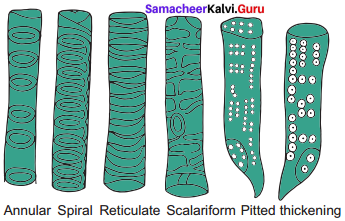 Types of secondary wall thickenings in tracheids and vessels:
Tracheids are dead, dignified, and elongated cells with the tapering end. Its lumen is broader than that of fibres. In cross-section, the tracheids are polygonal. There are different types of cell wall thickenings due to the deposition of secondary wall substances. They are annular (ring-like), spiral (spring-like), scalariform (ladder-like) reticulate (net-like), and pitted (uniformly thick except at pits). Tracheids are imperforated cells with bordered pits on their sidewalls. Only through this conduction takes place in Gymnosperms. They are arranged one above the other. Tracheids are chief water-conducting elements in Gymnosperms and Pteridophytes. They also offer mechanical support to the plants. 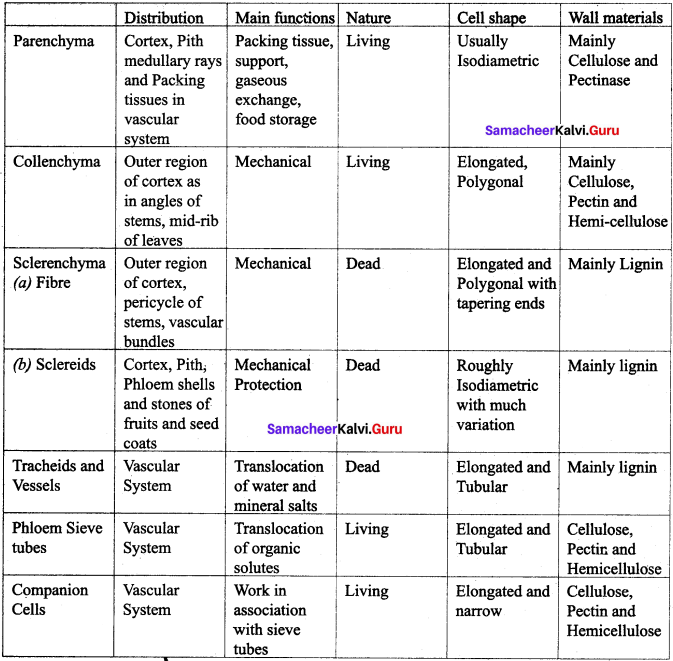 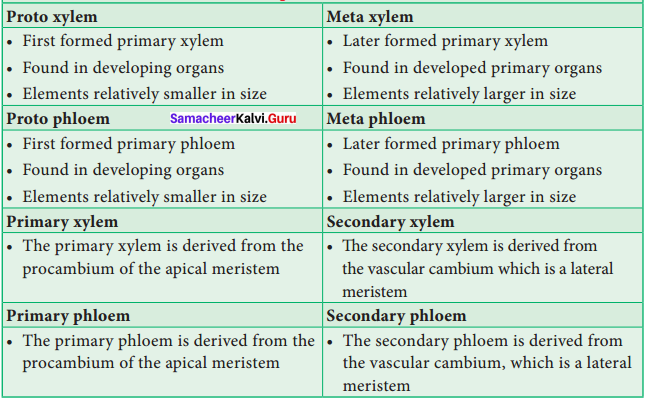 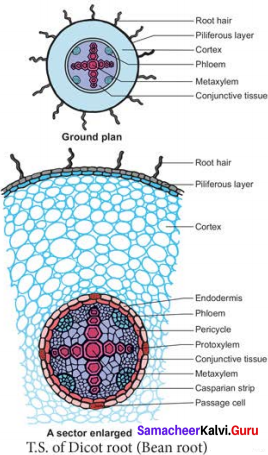 Question 7.
Explain Any two Root Apex organisation theories.
Answer:
The root apex is dome-shaped structure. It is subterminal because it is cov^ed by root cap.
Theories – explaining the organization of root apex.
1. Histogen theory: 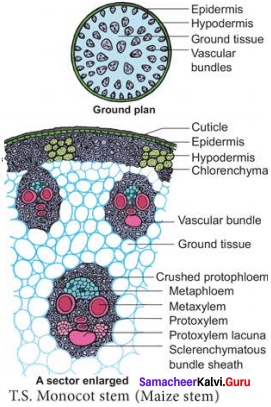 A stomata is surrounded by a pair of bean shaped cells are called guard cells. Each stoma internally opens into an air chamber. These guard cells contain chlotroplasts. The main function of epidermis is to give protection to the inner tissue called mesospyll. The cuticle helps to check transpiration. Stomata are used for transpiration and gas exchange.

The function of palisade parenchyma is photosynthesis. Spongy parenchyma lies below the palsied parenchyma. Spongy cells are irregularly shaped. These cells are very loosly arranged with numerous airspaces. As compared to palisade cells, the spongy cells contain number of chloroplasts. Spongy cells facilitate the exchange of gases with the help of air spaces. The air space that is found next to the stomata is called respiratory cavity or substomatal cavity. Å 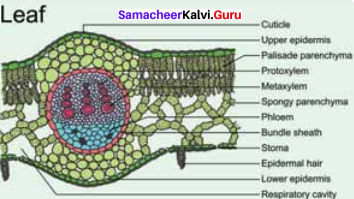 Hope all the information given regarding Class 11th Tamilnadu State Board Bio Botany Solutions will help you to get good knowledge. For any queries, you can contact us and clear your doubts. Connect with us using the comment section. Also, we love your feedback and review. Get your Chapter Wise Samacheer Kalvi Class 11th Textbook Solutions for Bio Botany Solutions Chapter 9 Tissue and Tissue System Questions and Answers PDF start learning for the exam.