Samacheer Kalvi 12th Bio Zoology Solutions Question 1.
In which type of parthenogenesis are only males produced?
(a) Arrhenotoky
(b) Thelytoky
(c) Amphitoky
(d) Both a and b
Answer:
(a) Arrhenotoky

12th Bio Zoology 1st Lesson Question 4.
In which mode of reproduction variations are seen?
(a) Asexual
(b) Parthenogenesis
(c) Sexual
(d) Both a and b
Answer:
(c) Sexual

12th Zoology Chapter 1 Book Back Answers Question 5.
Assertion and reasoning questions:
In each of the following questions there are two statements. One is assertion (A) and other is reasoning (R). Mark the correct answer as
(a) If both A and R are true and R is correct explanation for A
(b) If both A and R are true but R is not the correct explanation for A
(c) If A is true but R is false
(d) If both A and R are false
I. Assertion: In bee society, all the members are diploid except drones.
Reason: Drones are produced by parthenogenesis.
A B C D
II. Assertion: Off springs produced by asexual reproduction are genetically identical to the parent.
Reason: Asexual reproduction involves only mitosis and no meiosis.
A B C D
III. Assertion: Viviparous animals give better protection to their off springs.
Reason: They lay their eggs in the safe places of the environment.
A B C D
Answer:
(I) A (II) A (III) C

12th Bio Zoology 1st Lesson Book Back Answers Question 6.
Name an organism where cell division is itself a mode of reproduction.
Answer:
Amoeba

Samacheer Kalvi Guru 12th Zoology Question 8.
What is parthenogenesis? Give two examples from animals.
Answer:
Development of an egg into a complete individual without fertilization is known as parthenogenesis. It was first discovered by Charles Bonnet in 1745.
E.g. Honey bees, Aphis.

Reproduction In Organisms Class 12 Pdf Question 13.
Give reasons for the following:

(b) Budding in yeast and budding in Hydra:

(c) Regeneration in lizard and Planaria:

Reproduction In Organisms Questions And Answers Question 15.
How is juvenile phase different from reproductive phase?
Answer:

I. Choose the Correct Answer

Question 4.
Which type of parthenogenesis only females are produced?
(a) Arrhenotoky
(b) Amphitoky
(c) Thelytoky
(d) Both (a) and (b)
Answer:
(c) Thelytoky

Question 5.
Which among the following animal is not a continuous breeder?
(a) Hen
(b) Rabbit
(c) Honey bees
(d) Frogs
Answer:
(d) Frogs

Question 9.
The process by which gravid proglottids of tapeworm gets cut off is called ___________
Answer:
apolysis

Question 15.
The ploidy of males produced by arrhenotoky parthenogenesis is
Answer:
haploid

Question 20.
Pick out the organism whose fertilization occurs internally.
(a) reptiles
(b) sponges
(c) pisces
(d) amphibians
Answer:
(a) reptiles

Question 3.
Define fission.
Answer:
Fission is the division of the parent body into two or more identical daughter individuals.

Question 6.
What do you mean by regeneration in living organisms? Mention its types.
Answer:
Regeneration is the regrowth of injured region.
It is of two types:

Question 8.
What is Paedogamy?
Answer:
Paedogamy is the sexual union of young individuals produced immediately after the division of the adult parent cell by mitosis.

Question 9.
Write a brief note on conjugation.
Answer:
Conjugation is the temporary union of the two individuals of the same species. During their union both individuals, called the conjugants exchange certain amount of nuclear material (DNA) and then get separated. Conjugation is common among ciliates,
e.g. Paramecium, Vorticella and bacteria (Prokaryotes).

Question 11.
Define Vivipary.
Answer:
Vivipary is a condition in which animals give rise to live young ones after being nourished in the uterus though the placenta.
E.g. human.

Question 12.
List out the four types of binary fission.
Answer:

Question 14.
Define apolysis.
Answer:
The detachment of gravid proglottids either singly or in groups from the body of tapeworm is called apolysis.

Question 16.
Write a short note on encystment in amoeba.
Answer:
During unfavorable conditions (increase or decrease in temperature, scarcity of food) Amoeba withdraws its pseudopodia and secretes a three-layered, protective, chitinous cyst wall around it and becomes inactive. This phenomenon is called encystment. When conditions become favourable, the encysted Amoeba divides by multiple fission and produces many minute amoebae called pseudopodiospore or amoebulae.

The cyst wall absorbs water and breaks off liberating the young pseudopodiospores, each with a fine pseudopodia. They feed and grow rapidly to lead an independent life.

Question 17.
How exogenous buds are developed by Hydra?
Answer:
When buds are formed on the outer surface of the parent body, it is known as exogenous budding e.g. Hydra. In Hydra when food is plenty, the ectoderm cells increase and form a small elevation on the body surface. Ectoderm and endoderm are pushed out to form the bud. The bud contains an interior lumen in continuation with parent’s gastrovascular cavity. The bud enlarges, develops a mouth and a circle of tentacles at its free end. When fully grown, the bud constricts at the base and finally separates from the parent body and leads an independent life.

Question 18.
Apolysis favours Taenia solium. How?
Answer:
In the tapeworm, Taenia solium the gravid (ripe) proglottids are the oldest at the posterior end of the strobila. The gravid proglottids are regularly cut off either singly or in groups from the posterior end by a process called apolysis. This is very significant since it helps in transferring the developed embryos from the primary host (man) to find a secondary host (pig).

Question 19.
What is autogamy?
Answer:
In autogamy, the male and female gametes are produced by the same cell or same organism and both the gametes fuse together to form a zygote
e.g. Actinosphaerium and Paramecium.

Question 20.
What is exogamy?
Answer:
In exogamy, the male and female gametes are produced by different parents and they fuse to form a zygote. So it is biparental. e.g. Human – dioecious or unisexual animal.

Question 21.
Give the definition for

Question 23.
Explain briefly on the nature of Ovovivipary.
In Ovoviviparous animals, the embryo develops inside the egg and remains in the mother’s body until they are ready to hatch. This method of reproduction is similar to viviparity but the embryos have no placental connection with the mother and receive their nourishment from the egg yolk. Ovoviviparity is seen in fishes like shark.

Question 24.
Point out any six modes of asexual reproduction seen in animals.
Answer:

Question 26.
Name the types of animals based on embryonic development with an example for each.
Answer:

Question 29.
Draw and label a gemmule of sponge.
Answer: 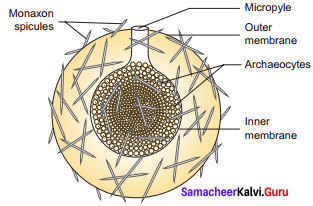 Question 31.
Describe the regeneration process noticed in living organism.
Answer:
Regeneration is regrowth in the injured region. Regeneration was first studied in Hydra by Abraham Trembley in 1740. Regeneration is of two types, morphallaxis and epimorphosis. In morphallaxis the whole body grows from a small fragment e.g. Hydra and Planaria. When Hydra is accidentally cut into several pieces, each piece can regenerate the lost parts and develop into a whole new individual. The parts usually retain their original polarity, with oral ends, by developing tentacles and aboral ends, by producing basal discs.

Question 1.
Under threat or attack, garden lizard loses a part of its tail which trembles and avert the attention of predators, so that the lizard escapes later the tail regrown for lizard. The same phenomenon can also be noticed in organisms like starfish etc. What do you call this phenomenon? Define it.
Answer:
Regeneration is the regrowth in the injured region.

Answer:
A – Only males
B – Only Females
C – Both Males & Females

Question 5.
‘A’ and ‘B’ are the male & female sex cells respectively which look alike and performs similar functions. ‘A’ and ‘B’ fuse to form a new individual ‘D’ Which type of gametic fusion does this represent? Give an example.
Answer:
Isogamy Eg: Monocystis

Question 6.
Complete the flow chart by mentioning the ploidy of cells in boxes.
Answer: 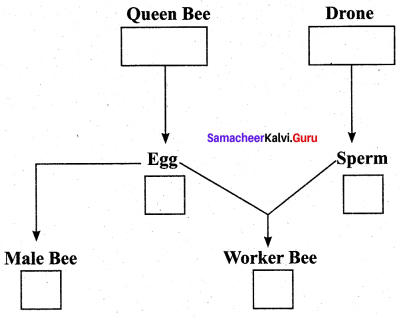 Question 7.
Meiosis is a type of cell division where the chromosomal number is reduced to half the number daughter cells. Which type of cellular division occurs in the drones to produces spermatozoa? Why?
Answer:
The gonadal cells of drones undergo mitosis to form sperms. Because the drones are haploid in nature since they develop from unfertilized eggs. To avoid further reduction in chromosome no. and maintain the chromosomal constancy, (instead of undergoing meiosis), mitosis will take place leading to formation of haploid gametes.