You can Download Samacheer Kalvi 12th Maths Book Solutions Guide Pdf, Tamilnadu State Board help you to revise the complete Syllabus and score more marks in your examinations.

(iv) A saving amount pays 8% interest per year, compounded continuously. In addition, the income from another investment is credited to the amount continuously at the rate of ₹ 400 per year.
Solution:
Let ‘x’ be the amount invested.

Question 2.
Assume that a spherical rain drop evaporates at a rate proportional to its surface area. Form a differential equation involving the rate of change of the radius of the rain drop.
Solution: 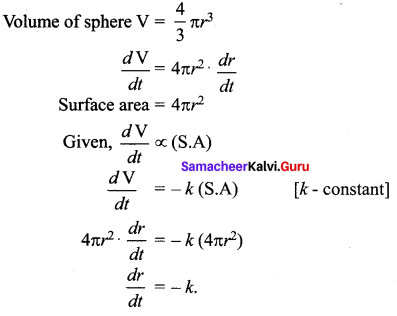