A. Fill in the blank

B. Choose the bent answer

The Universe And Solar System 6th Standard Question 1.
The movement of the Earth on its axis is called
(a) Revolution
(b) Seasons
(c) Rotation
(d) Circulation
Answer:
(c) Rotation

Samacheer Kalvi Guru 6th Social Question 5.
Which of the following planets can float on water?
(a) Jupiter
(b) Saturn
(c) Uranus
(d) Neptune
Answer:
(b) Saturn

C. Circle the odd one out

(I) Consider the following statement

Choose the correct answer using the codes given below.

Samacheer Kalvi 6th Social Science Guide Question 2.
Pluto is no longer a planet. Reason out.
Answer:
Unlike planets Pluto share its orbit with other planets.

Samacheer Kalvi 6th Social Guide Question 3.
What is perihelion?
Answer:
Perihelion is the Earth’s closest position to the Sun.

Samacheer Kalvi 6th Social Solutions Question 4.
How many times in a year would you find the Sun overhead if you lived on 20°N Latitude?
Answer:
2 times.

Solar System Class 6 Question 5.
Which celestial body shares its orbit with others? Give an example,
Answer:

Question 2.
The surface of the moon has many craters.
Answer:
The craters are formed due to the meteorites which fall on the moon’s surface.

Question 3.
The velocity of Earth’s rotation is zero at poles,
Answer:

I. Answer In detail.

Question 2.
What are the effects of rotation and revolution?
Answer:
Rotation:

Question 3.
Explain the characteristic! of the various spheres of the Earth.
Answer:
Earth is the most suitable planet to support life. It has three major components that we call as the realms of the Earth lithosphere, hydrosphere and atmosphere.

(ii) Hydrosphere : The word Hydro means water in Greek. The hydrosphere consists of water bodies such as oceans, seas, rivers, lakes, ice caps on mountains and water vapour in the atmosphere.

(iii) Atmosphere : The word Atmo means air in Greek. Atmosphere is the envelope of air that surrounds the Earth. Different types of gases make up the atmosphere. The major gases are Nitrogen (78%) and Oxygen (21%).

(iv) Biosphere : The narrow belt of interaction among the lithosphere, the hydrosphere and the atmosphere, where life exists is known as Biosphere. Bio means life in Greek. It consists of distinct zones. 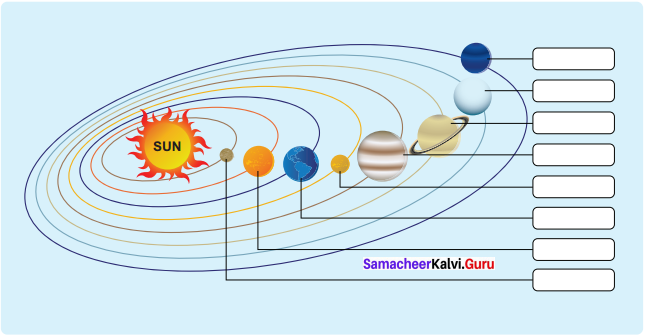 Question 2.
Look at the picture and answer the questions given below, 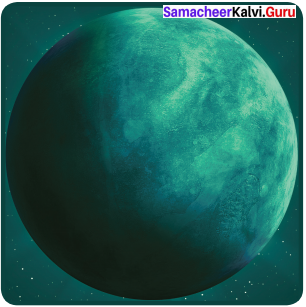 (a) Identify the planet
Answer:
Uranus

(b) What is the colour of the planet?
Answer:
Green

(c) Why is it of this colour?
Answer:
It appears green due to the presence of methane

K. Solve the Puzzle Across 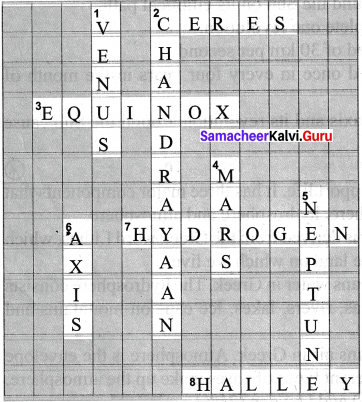 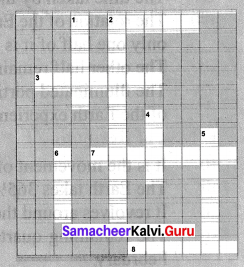 HOTS:
Question 1.
Even though Mercury Is the nearest planet to the Sun, Venus Is the hottest one, Guess why?
Answer:

Question 2.
If you could put Saturn In a large enough ocean It would float. Guess why?
Answer:

Question 3.
Imagine you were on a space craft travelling at the speed of light from Earth, how long would It take to reach the Sun?
Answer:

Question 4.
We see only one side of the Moon always. Why?
Answer:

Question 5.
Priya Is 12 years old. How many limes she would have revolved around the Sun?
Answer:

Question 6.
If the Earth is not Inclined at 231/2° angle, what would happen to the Earth ?
Answer:

Question 1.
Watch a show In the nearest planetarium,
(a) Share your experience In the class room,
(b) Make an album of Interesting facts about the Solar System.
(c) In the Solar System
Answer:

B. Choose the correct answer

Question 13.
Solid layer of rocks and soil is found in:
(a) Biosphere
(b) Lithosphere
(c) Hydrosphere
(d) Atmosphere

C. Find the odd one out

G. Answer in a sentence or two

Question 2.
Did the ancient Tamils know that the planets went around the Sun? It yes, then give example.
Answer:
Yes. In Tamil literature, Sirupanatruppadai, it is mentioned that the Sun is surrounded by planets.

Question 3.
What is a solar system?
Answer:

Question 5.
Write a note on the venus.
Answer:

Question 8.
Define satellites
Answer:
Satellites are celestial objects, which revolve around the planets.

Question 9.
Where do we find the Asteroids?
Answer:

Question 10.
What is the Rotation?
Answer:
Rotation is the spinning movement of the Earth on its axis.

Question 11.
What is Revolution?
Answer:
Revolution is the movement of the Earth around the Sun on its elliptical path.

Question 3.
Life is possible on Earth because of the presence of land, air and water.
Answer:
Mars appears red in colour.

Question 5.
Seasons are caused.
Answer:
The inclination of the Earth on its axis and its revolution around the Sun cause different seasons.

Question 6.
We think the sun is continuously moving north and south of the equator.
Answer:
The changing position of the Earth in its orbit during revolution gives this impression.

I. Answer In detail.

Question 1.
Distinguish between Mercury and Venus.