Question 5.
__________ basin gets rainfall every day because of its equatorial location
(a) The Mackenzie
(b) The Orinoco
(c) The Amazon
(d) The Parana
Answer:
(c) The Amazon

Question 1.
The eastern coast of North America particularly USA enjoys mild climate.
Answer:
The South and east is usually warm all the year round and the regions around the mouth of the Mississippi-Missouri and the Gulf Coast have summer rain from the North East Trades which blow on-shore in summer.

Question 3.
Though Quito and Amazon basin are in the same latitude Quito enjoys eternal Spring. Whereas Amazon basin is hot.
Answer:

Question 4.
Peru is one of the world’s largest producers of tropical fish.
Answer:

Question 1.
The Rocky mountain and the Appalachian mountain.
Answer:

Question 2.
The Prairies and the Pampas grassland.
Answer:

VI. Put (✓) for the correct option

Question 2.
Write a note on Mackenzie River.
Answer:
The Mackenzie River is the second largest drainage basin of North America. It has it source from Great Slave Lake and drains into Arctic Ocean.

Question 3.
What type of fruits are cultivated in North America? Name some of them.
Answer:

Question 4.
Give a short note about the lifestyle of an Eskimos.
Answer:

Question 7.
What is called “4’O clock rains”?
Answer:
In equatorial regions convectional rain occurs almost daily in the afternoons. It generally occurs at 4pm that’s why it is known as 4’ O Clock Rain.

Question 8.
Name the flora and fauna of equatorial forest in South America.
Answer:

Question 9.
What is known as “Estancias”?
Answer:
The Breeds raised on large pasture lands is known as Estancias. These are divided into several paddocks. Besides this, there are small yards known as corrals where animals are sorted and branded. The owner is the Estanciera who has a number of gauchos.

VIII. Answer the following in a paragraph

Question 1.
Give an account of the climate of North America.
Answer:

Question 1.
With the help of the map given in the text and an atlas, name the seas and bays in North America
Answer: 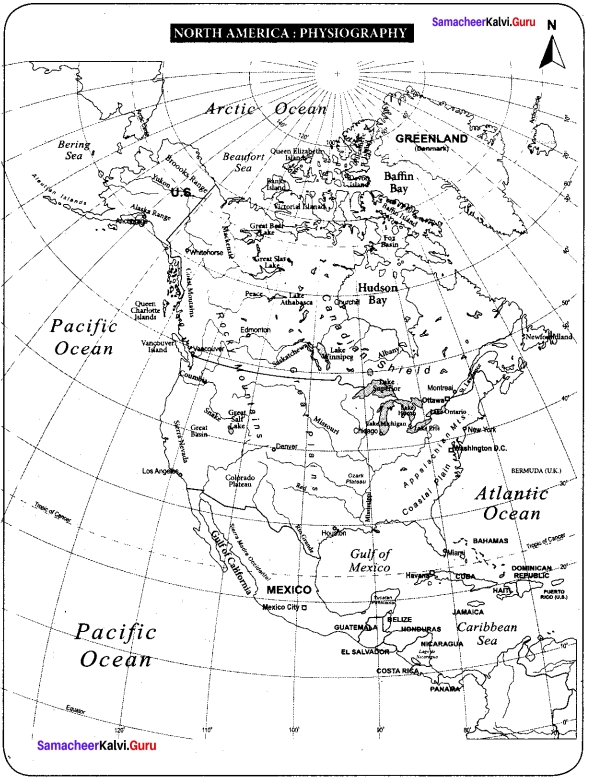 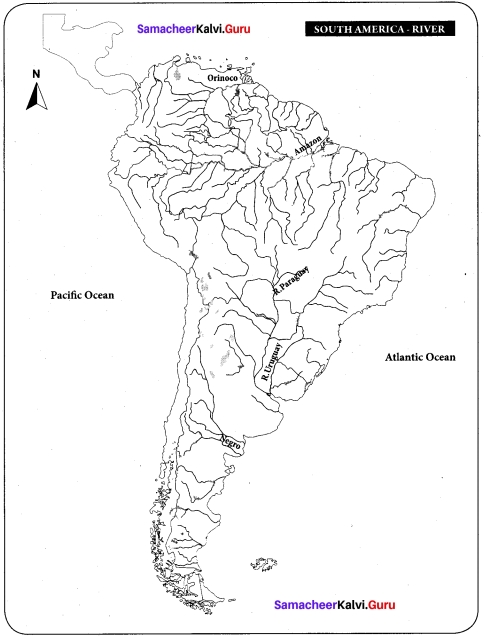 Question 2.
Write down the answers to the question given in blocks:
(a) Name the highest peak in South America.

(b) An active volcano in South America

(d) The highest falls in the world.

(e) The largest river in the world.

Question 5.
The _____ small countries which lies to the south of Mexico are referred to as central America
(a) six
(b) seven
(c) eight
(d) nine
Answer:
(b) seven

Question 9.
Mississippi and Missouri together form the _______ longest river system in the world.
(a) sixth
(b) fourth
(c) fifth
(d) third
Answer:
(b) fourth

Question 14.
North America is the largest producer of meat and about ________ of the world production.
(a) one fourth
(b) one sixth
(c) half
(d) three fourth
Answer:
(a) one fourth

Question 1.
Mississippi river has been given the nick name “The Big Muddy”.
Answer:

Question 4.
Cordilleras come under pacific ring of fire.
Answer:
The Cordilleras are also part of the Fire Ring of the Pacific. Because there are a number of active volcanoes and this area is also subject to earthquakes.

Question 3.
What are westerlies?
Answer:
The Westerlies or anti-trades are prevailing winds from the west toward the east in the middle latitudes between 30 and 60 degrees latitude.

Question 4.
Write a note on Grand Banks.
Answer:
Grand Banks: The Grand Banks is among the worlds largest and richest resource areas, renowned for both their valuable fish stocks and petroleum reserves.

Question 12.
Write a note on the coniferous forest of south America.
Answer:
The forests on the slopes of the Andes have coniferous such as pine, fir and spruce. These forests are also called Montana. They yield valuable softwood for the paper and pulp industry.

Question 13.
Write a note on Orinoco and Paraguay rivers.
Answer:

Question 2.
Write in detail about the drainage of North America.
Answer:
Drainage:

Question 3.
Write in detail about the crops grown in North America.
Answer:
(i) Agriculture:
Though least proportion of the total workforce is engaged in agriculture Americas agriculture is most productive in the world. Wheat, Corn (Maize), Oats, Soybean, Barley and many other food crops are grown throughout the vast interior plains.

(iii) Barley and Oats:
These are temperate crops which withstand cold climate and need less water. The Barley is grown in the United States and are produced in Minnesota, North Dakota and Washington. Barley and Oats is used as cattle fodder.

(iv) Cotton:
Cotton grows well in Southern and Western States and it is dominated in Texas, California, Mississippi, South of the Prairies and the Mexico. Warm summer with frequent rainfall and fertile soil are favorable conditions for growth of cotton crop.

(v) Sugar cane:
Sugar cane is cultivated along the Gulf of Mexico, Parts of Central America and West Indies. It is an important Cash Crop of West Indies. Cuba is known as the “sugar bowl of the world” and it is the worlds largest exporter of sugar.

(vi) Soya beans:
It is raised in the same area where Maize is grown. It is used for extraction of edible ml.

(vii) Potatoes and Sugar beet:
Prairie Region, North Dakota and Minnesota are the producers of Sugar Beets and Potatoes. Sugar beet is used for making Sugar. Potato and Sugar Beet are used to feed cattle and pigs.

The River Basins (or) the Central Plains:

Question 7.
Explain about the industries of South America.
Answer:
Industries:

Question 8.
Explain about the Transport of South America.
Answer:
Transport:
Unlike North America, South America still does not have an adequately integrated transportation network. Significant efforts have been made to improve both the connection within the countries and the linkages between them.