7th Std Social Science Guide Question 3.
Which of the following was the lowest unit of Chola administration?
(a) Mandalam
(b) Nadu
(c) Kurram
(d) Ur
Answer:
(d) Ur

7th Term 2 Social Book Back Answers Question 1.
Which of the following statements about Later Cholas are correct?

7th Standard Social Guide Question 2.
Which of the following statements are true with regard to Rajendra Chola?

The Elder Son Of The Chola King Was Called Yuvaraja Question 4.
Arrange the following administration divisions in descending order.

Samacheer Kalvi Guru 7th Social Science Question 3.
Write about Kanikadan.
Answer:
The revenue of the Chola state came mainly from the land. The land tax was known as Kanikadan. The Chola rulers carried out an elaborate survey of land in order to fix the government’s share of »the land revenue. One-third of produce was collected as land tax. It was collected mostly in kind.

IX. Student Activity :
Who am I? 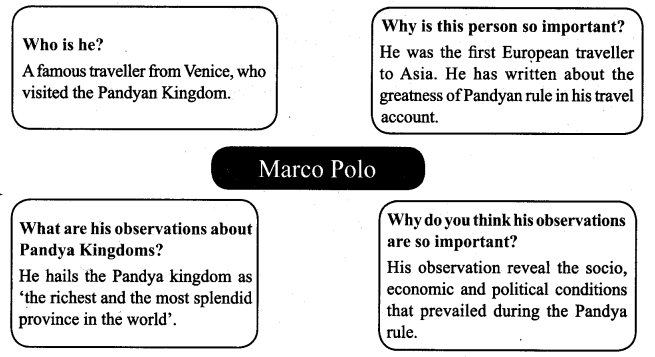 Question 1.
The ancient Chola kingdom reigned with ______ as its capital
(a) Thanjavur
(b) Uraiyur
(c) Kayal
(d) Madurai
Answer:
(b) Uraiyur

Question 5.
Marcopolo recorded the incident of _____ and poiigamy practised by the sings in his travel account
(a) Child Marriage
(b) Sati
(c) Untouchability
(d) Chaild Labour
Answer:
(b) Sati

Question 1.
Vati-vaykkal is a traditional type of harnessing rain in the Cauvery delta.
Answer:
True

Question 3.
The Chera ruler, the chief of Malanadu, accepted his feudatory position and paid tribute to Sundarapandyan.
Answer:
True

V. Match the statement with the reason. Tick the appropriate answer:

Question 3.
Which of the following statements is/are correct?

VI. Answer in one word.

Question 1.
How were the landowning groups called during the Pandya rule?
Answer:
Bumiputtirar or Vellalar

Question 2.
What was the average cost of a horse used for trading in Pandya Kingdom?
Answer:
220 dinars of red gold.

Question 1.
For what purposes were horses used during Pandya rule?
Answer:
Horses were used for trading, ceremonial purposes and also to fight wars.

Question 2.
Write a short note on the administrative system of the chola period.

Question 3.
What were the responsibilities of the Local Governannce committees in the chola period?
Answer:
The committees took care of irrigation, roads, temples, gardens, collection of revenue and conduct of religious festivals.

Question 1.
What was the impact of attitude of Pandya kings towards different sects of religions?
Answer: