Rock And Soil Class 8 Question 1.
Which of the following is known as sphere of rocks –
(a) Atmosphere
(b) Biosphere
(c) Lithosphere
(d) Hydrosphere
Answer:
(c) Lithosphere

Samacheer Kalvi Guru 8th Social Book Solutions Question 7.
Which one of the following is the most widespread most and’productive category of soil –
(a) Alluvial soil
(b) Black soil
(c) Red soil
(d) Mountain soil
Answer:
(a) Alluvial soil

III. State whether the following statements are true or false 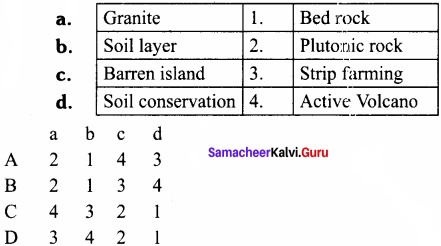 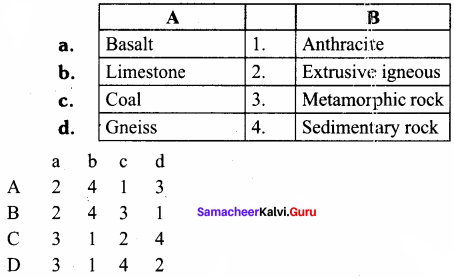 V. Choose the incorrect statement from the following

Answer:
3. Sedimentary rocks are the hardest ones.

VI. Consider the following statements and choose the right option from the given ones

VII. Give reasons for the following

X. Give detailed answer for the following

Igneous:
(i) The igneous rocks are formed by the solidification of molten magma. Also called Primary or Parent Rocks.
(ii) Types:

1. Extrusive Igneous Rocks:
Molten magma which comes out from the interior of the earth’s surface, gets solidified and forms such rocks. Fine grained and glassy in nature. Eg., Basalt, found in north western peninsular India.

2. Mechanical sedimentary rocks:
Formed from the disintegration of Igneous and metamorphic rocks. Get deposited due to erosion by natural agents. Get cemented after a long time to form rocks. Example Sandstone, Shale.

Metamorphic:
(i) Formed when Igneous and sedimentary rocks are subjected to high temperature and pressure.
(ii) Types:

1. Thermal Metamorphic:
If the change in rocks is caused by high temperature.

2. Dynamic Metamorphic:
If the change in rock is caused by high pressure. Formed from Igneous rocks. Eg., Granite into gneiss
Formed from Sedimentary rocks. Eg., Shale into Slate

Question 3.
Give an account on different layers of soil.
Answer: 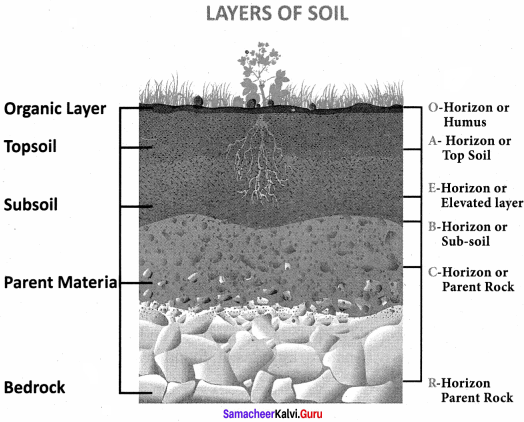 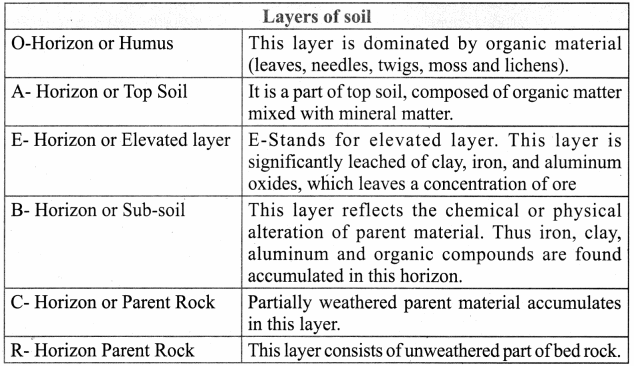 Question 4.
Classify and explain the soil.
Answer:
Definition:
Soil is a mixture of Organic matter, minerals, gases, liquids and organisms that together support life.

Classification of soils:
Soils are classified on the basis of their formation, colour, physical and chemical properties. Based on these, soil is classified into six major types. They are: Alluvial soil, Black soil, Red soil, Laterite soil, Mountain soil, Desert soil.

Question 1.
Complete the following table with the help of internet source 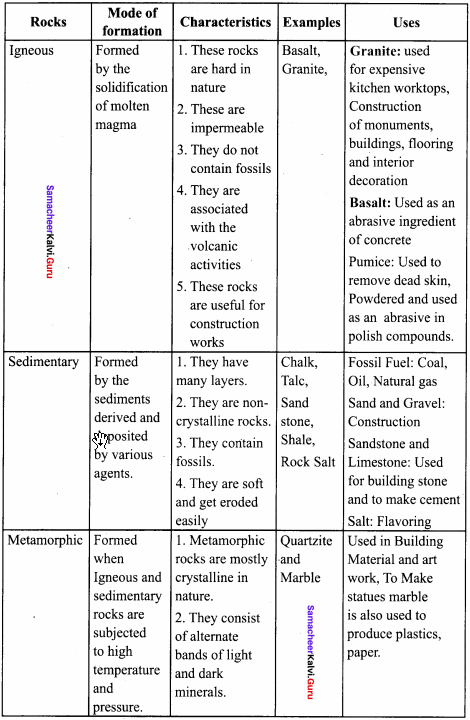 Question 2.
Map Work:
Mark the areas of black soil on the outline map of India.
Answer: 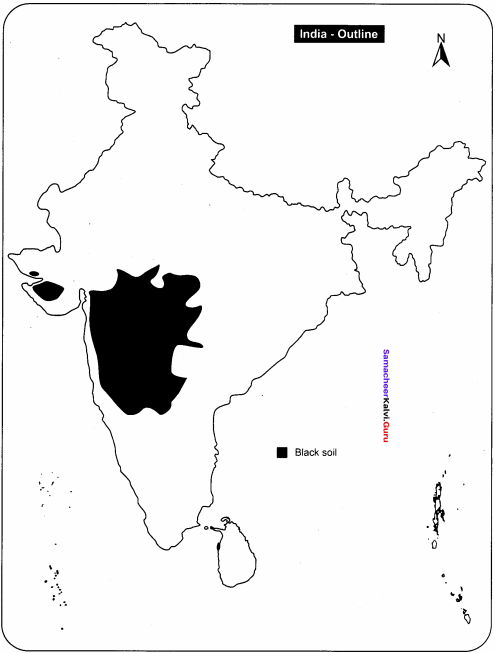 Question 3.
Oldest sedimentary rocks of the world have been identified in
(a) Green land
(b) India
(c) France
(d) Australia
Answer:
(a) Creen landi

IV. Choose the incorrect statement from the following

V. Consider the following statement and choose the right option from the given ones

Statement (2) :
India is an Agricultural country.

VI. Give Reason for the following

Question 1.
The Laterite soil is infertile.
Answer:
Laterite are the typical soils of trophical regions. These soils are found in the regions which experienced alternate wet and dry condition. As these soils are formed by the process of leaching, it is in fertile.

Question 1.
Name the four realms of earth.
Answer:
Four realms of the earth, are lithosphere, hydrosphere, atmosphere and biosphere.

Question 3.
What is lava?
Answer:
Lava is actually a fiery red molten magma comes out from the interior of the earth on its surface.

Question 4.
Why are crystalline rocks called so?
Answer:
The intrusive Igneous rocks consist of large crystals, and so they are also called as ‘Crystalline rocks’.

Question 6.
What are the characteristics of Sedimentary rocks?
Answer:

Question 7.
What is Thermal Metamorphism?
Answer:
If the change in the rocks is mainly caused by high temperature, the process is called as thermal metamorphism..

Question 2.
Explain the Rock cycle with a diagram.
Answer:
1. Igneous rocks are the primary rocks formed first on the earth. These rocks are weathered, eroded, transported and deposited at some places to form sedimentary rocks.

2. The Igneous and Sedimentary rocks are changed into metamorphic rocks under the influence of temperature and pressure.

3. The metamorphic rocks are also get disintegrated and deposited to form sedimentary rocks.

4. Formation of igneous rocks take place when there is an outflow of molten materials. Like this, the rocks of the earth crust keeps on changing from one form to another form under various natural forces and agents.

5. The endless process is referred as Rock Cycle. 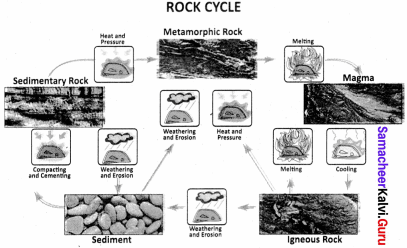 Question 3.
Mention the uses of soils.
Answer:
Uses of soils:
Soil is one of the important natural resource. It is a basic requirement for plant growth and supports various life forms on the earth.