Samacheer Kalvi Guru 8th Social Science Question 2.
Which of the following European Nation was the foremost attempt to discover a sea route to India?
(a) Dutch
(b) Portugal
(c) France
(d) Britain
Answer:
(b) Portugal

Samacheer Kalvi Guru 8th Social Guide Question 6.
Who among the following Europeans were the last to come India as traders?
(a) The British
(b) The French
(c) The Danish
(d) The Portuguese
Answer:
(b) The French

8th Social Science 1st Lesson Question Answer Question 7.
Tranqueber on the Tamilnadu coast was a trade centre of the ……………
(a) The Portuguese
(b) The British
(c) The French
(d) The Danish
Answer:
(d) The Danish

Advent Of European To India Pdf Question 1.
(i) Governor Nino de Cunha moved Portuguese capital from Cochin to Goa.
(ii) Portuguese were the last to leave from in India.
(iii) The Dutch founded their first factory at Surat.
(iv) Sir Thomas Roe was sent to Jahangir’s court by King James I of England.

VI. Answer the following in one or two sentences.

Question 1.
Give a short note on Archives?
Answer:
Archives is the place where historical documents are preserved. The National Archives of India (NAI) is located in New Delhi. It is the chief storehouse of the records of the government of India.

Question 2.
Write about the importance of Coins.
Answer:
Coins are a good source to know about administrative history. As compared to the literary sources the chances of manipulation is very less in the case of coins. Thus they are an authentic archaelogical source.

Question 3.
Why Prince Henry is called ‘Henry the Navigator’?
Answer:
Prince Henry of Portugal, who is commonly known as the “Navigator”, encouraged his countrymen to take up the adventurous life of exploring the unknown regions of the world.

Question 4.
Name the important factories established by the Dutch in India.
Answer:
After their arrival in India, the Dutch founded their first factory in Masulipatnam, (Andhra Pradesh) in 1605. The other important factories in India were Pulicat, Surat, Chinsura, Kasim bazaar, Patna, Nagapatnam, Balasore and Cochin.

Question 5.
Mention the trading centers of the English in India.
Answer:
The English had established their trading centres at Surat, Agra, Ahmadabad and Broach.

Question 1.
Give an account of the sources of Modern India.
Answer:
1. The sources for the history of modem India help us to know the political, socio – economic and cultural developments in the country.

2. The Portuguese, the Dutch, the French, the Danes, and the English recorded their official transactions in India on state papers.

3. History can be written with the help of written sources and material sources.

4. Written Sources:
After the advent of the printing press, book were published in different languages people began to acquire knowledge easily in the fields like art, literature, history and science.

6. Archives:
It has main source of information for understanding past administrative machinery as well as a guide to the present and future generations related to all matters.

7. Material Sources:
Paintings and statues are the main sources of modem Indian history which provide information about national leaders and historical personalities and their achievements.

8. Historical buildings and museums preserve and promote our cultural heritage,

9. Coins are a good source to know about administrative history.

Question 2.
How did the Portuguese establish their trading centres in India?
Answer:
1. In A.D. 1498, Vasco da Gama reached Calicut, where he was cordially received by King Zamorin, the ruler of Calicut. A second Portuguese navigator, Pedro Alvares Cabral, sailed towards India in 1500.

2. Vasco da Gama came to India for the second time in 1501 with 20 ships and founded a trading centre at Cannanore.

3. One after another, they established factories at Calicut and Cochin.

4. King Zamorin attacked the Portuguese in Cochin, but was defeated.

5. Cochin was the first capital of the Portuguese East India Company.

6. In 1505, Francisco de Almeida was sent as the first Governor for the Portuguese possessions in India.

7. Almeida had the aim of developing the naval power of the Portuguese in India. His policy was known as the “Blue Water Policy”.

8. Sultans of Bijapur and Gujarat were also apprehensive of the expansion of Portuguese control of ports which led to an alliance between Egypt, Turkey and Gujarat against Portuguese invaders.

9. In a naval battle fought near Chaul, the combined Muslim fleet won a victory over the Portuguese fleet under Almeida’s son.

10. Almeida defeated the combined Muslim fleet in a naval battle near Diu, and by the year 1509, Portuguese claimed the naval supremacy in Asia.

11. The real founder of the Portuguese power in India was Alfonso de Albuquerque who captured Goa and established the Portuguese authority over Ormuz in Persian Gulf.

13. During the 16th century, Portuguese succeeded in capturing Goa, Daman, Diu, Salsette, Bassein, Chaul and Bombay on the western coast, Hooghly on the Bengal coast and San Thome on the Madras coast and enjoyed good trade benefits.

Question 3.
How did the British establish their trading centres in India?
Answer:
1. In 1600, Elizabeth, the Queen of England granted a charter to the governor and company of Merchants of London to trade with East Indies.

2. The Company was headed by a Governor and a court of 24 directors.

3. Captain Hawkins visited Jahangir’s court and secured permission to raise a settlement at Surat which was cancelled later.

4. In 1612, the English Captain Thomas Best, inflicted a severe defeat over the Portuguese in a naval battle near Surat.

5. The Mughal Emperor Jahangir permitted the English to establish their factory in 1613 at Surat, which became the headquarters of the English in western India.

6. Captain Nicholas Downton won another decisive victory over the Portuguese in 1614.

7. This enhanced the British prestige at the Mughal court.

8. In 1615, Sir Thomas Roe was sent to Jahangir’s court by King James I of England, who succeeded in concluding a commercial treaty with the emperor

9. Before the departure of Sir Thomas Roe, the English had established their trading centres at Surat, Agra, Ahmadabad and Broach.

Question 1.
On the river map of India, mark the following trading centres of the Europeans. 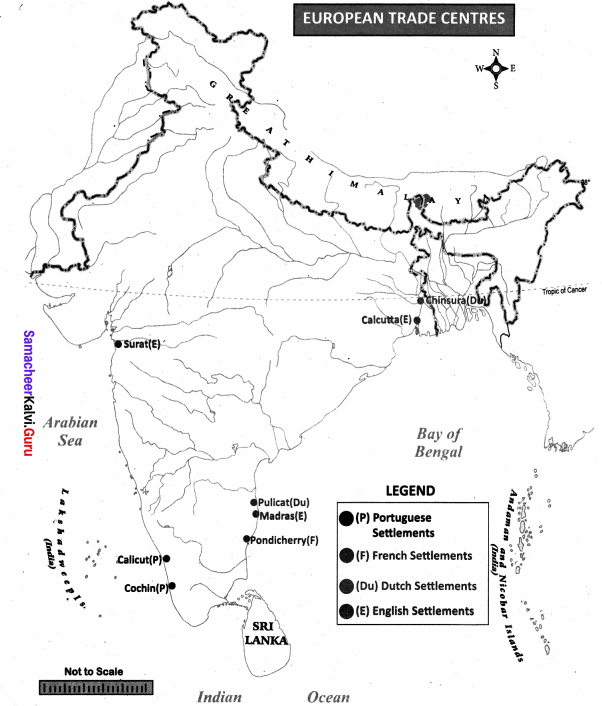 Question 1.
How did the fall of Constantinople affect the European nations?
Answer:

Question 1.
The ……………… of India attracted Europeans to this country.
(a) Technology
(b) Machinery
(c) Wealth
(d) River
Answer:
(c) wealth

Question 8.
After the capture of Constantinople by the Turks, the land route between India and ……………. was closed.
(a) Pakistan
(b) Bangladesh
(c) Africa
(d) Europe
Answer:
(d) Europe

Question 12.
Due to the influence of the Portuguese ……………. religion spread in India’s western and eastern coasts.
(a) Islam
(b) Catholic
(c) Buddhism
(d) Jainism
Answer:
(b) Catholic

Question 3.
After his third voyage to India, Vasco da Gama, died in Cochin in 1524.
Answer:
True

Question 1.
(i) After 1858, India came under the direct administration of the British crown.
(ii) The settlement of Pondicherry was founded by Martin under a grant from Ibrahim Lodi, the ruler of Bijapur.
(iii) France was the last European country to come to India as trader.
(iv) The three Carnatic wars ruined the English.

Find out the wrong pair

VI. Answer the following one or two sentences.

Question 2.
What was the impact of the invention of printing press in India?
Answer:
Numerous books were published in different languages. Hence, people began to acquire knowledge easily in the fields like art, literature, history and science.

Question 3.
Name the languages other than English in which the records and documents are found in Tamil Nadu Archives.
Answer:
The collections include series of administrative records in Dutch, Danish, Persian and Marathi. Few documents are in French, Portuguese, Tamil and Urdu.

Question 6.
What does the term ‘audio – visual’ mean?

Question 8.
Why was the English East India Company engaged in rivalry with the Portuguese and the Dutch?

Question 11.
Why was the British Successful when compared to the other powers?
Answer:
The comparative success of the British over the Portuguese, the Dutch, the Danish, and the French was largely due to their commercial competitiveness, spirit of supreme sacrifice, government support, naval superiority, national character and their ascendency in Europe.