I. Choice the correct answer.

9th Science Atomic Structure Question 2.
Change in the number of neutrons in an atom changes it to
(a) an ion
(b) an isotope
(c) an isobar
(d) another element
Answer:
(b) an isotope

II. True or false / if false give the correct answer.

III. Fill in the Blanks.

Atomic Structure Answers Question 1.
Name an element which has the same number of electrons in its first and second shell.
Answer:
Beryllium

Structure Of Atom Class 11 Question 2.
List the uses of isotopes.
Answer:
The uses of radioactive isotopes are as follows.

Atomic Structure Class 11 Question 3.
What is Isotone? Give an example.
Answer:
Atoms of different elements with different atomic number and different mass number, but with the same number of neutrons are called isotones.
Eg. Boron and carbon. 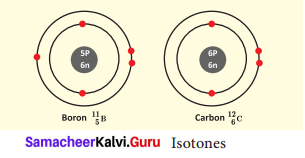 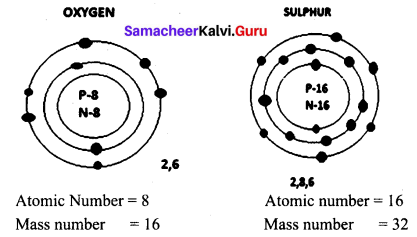 Class 9 Science Lesson 11 Question Answer Question 3.
State the Gay Lussac’s law of combining volumes, explain with an illustration.
Answer:
Whenever gases react together, the volumes of the reacting gases and the products bear a simple whole number ratio, provided all the volumes are measured under similar conditions of temperature and pressure.
Steps:

Two volumes of hydrogen react with one volume of oxygen to form two volumes of water vapour that is the ratio by volume, which gases bears is
2:1:2, which is a simple whole number ratio.

Structure Of Atom Class 9 Question Paper Question 2.
Calculate the number of neutrons in the following atoms: