Question 2.
The ice sheets from the north and south poles and the icecaps on the mountains, get converted into water vapour through the process of …………….
(a) evaporation
(b) condensation
(c) sublimation
(d) infiltration
Answer:
(a) evaporation

III. State whether the statements are true or false. Correct the false statements.

Question 1.
What are the two factors of biosphere?
Answer:
Biosphere is the part of the earth where life exists. All resources of biosphere can be grouped into two major categories namely:

Question 2.
How do human activities affect nitrogen cycle?
Answer:
Burning fossil fuels, application of nitrogen based fertilizers and other activities can increase the amount of biologically available nitrogen in an ecosystem.

Question 3.
What is adaptation?
Answer:
Any feature of an organism or its part that enables it to exist under conditions of its habitat is called adaptation.

Question 5.
Why is it important to conserve water?
Answer:
Importance of water conservation:

Question 6.
List some of the ways in which you could save water in your home and school?
Answer:

Question 8.
What is IUCN? What is the vision of IUCN?
Answer:
IUCN is an international organization working in the field of nature conservation and sustainable use of natural resources.
The vision of IUCN is ‘A just world that values and conserves nature’.

Question 1.
Describe the processes involved in the water cycle?
Answer:
Water cycle or hydrological cycle is the continuous movement of water on earth. In this process, water moves from one reservoir to another, from river to ocean or from ocean to the atmosphere by processes such as evaporation, sublimation, transpiration, condensation, precipitation, surface runoff and infiltration, during which water converts itself to various forms like liquid, solid and vapour.

Question 2.
Explain carbon cycle with the help of a flow chart?
Answer:
Carbon occurs in various forms on earth. Charcoal, diamond and graphite are elemental forms of carbon. Combined forms of carbon include carbon monoxide, carbon dioxide and carbonate salts. All living organisms are made up of carbon-containing molecules like proteins and nucleic acids. The atmospheric carbon dioxide enters into the plants through the process of photosynthesis to form carbohydrates.

Question 3.
List out the adaptations of xerophytes?
Answer:
The conditions that leads to adaptation of plants in a dry habitat are;

Question 4.
How does a bat adapt itself to its habitat?
Answer:
Mostly, bats live in caves. Caves provide them protection during the day from most predators and the temperature here is very stable. Apart from caves, bats also live in trees, hollowed logs and rock crevices. They are extremely important to humans as they reduce insect population and help to pollinate plants.

Bats are active at night. This is a useful adaptation for them, as flight requires a lot of energy during day. Their thin, black wing membrane (Patagium) may cause excessive heat absorption during the day. This may lead to dehydration.

Primary treatment:
Primary treatment involves temporary holding of the wastewater in a tank. The heavy solids get settled at the bottom while oil, grease and lighter solids float over the surface. The settled and floating materials are removed. The remaining liquid may be sent for secondary treatment.

Tertiary treatment:
Tertiary or advanced treatment is the final step of sewage treatment. It involves removal of inorganic constituents such as nitrogen, phosphorus and microorganisms. The fine colloidal particles in the sewage water are precipitated by adding chemical coagulants like alum or ferric sulphate. 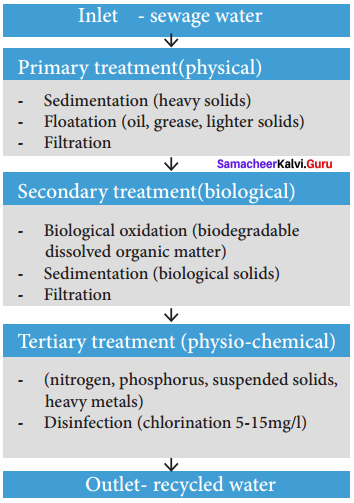 Question 1.
Roots grow very deep and reach the layers where water is available. Which type of plants develops the above adaptation? Why?
Answer:
Xerophytes are the type of plants that grow deep roots so as to reach the water source as they exist in a dry habitat.

Question 2.
Why streamlined bodies and presence of setae is considered as adaptations of earthworm?
Answer:
Stream-lined bodies helps them to live in narrow burrows underground and for easy penetration into the soil.
Setae help the earthworm to move through the soil and provide anchor in the burrows. Therefore these are considered to be adaptaions of earthworm.

Question 3.
Why is it impossible for all farmers to construct it in their fields?
Answer:
All farmers may not be able to constmct a pond in their fields as they occupy a large portion of farmer’s lands.

Question 2.
……………… is a type of vapourization, where liquid is converted to gas before reaching its boiling point.
(a) Evaporation
(b) Sublimation
(c) Condensation
(d) Transpiration
Answer:
(a) Evaporation

Question 3.
When there is change in wind or temperature, clouds combine to make bigger droplets, and pour down as ……………….
(a) percolation
(b) infiltration
(c) precipitation
(d) run off
Answer:
(c) precipitation

Question 8.
……………. is a state of inactivity in which the body temperature drops with a lowered metabolic rate during winter.
(a) Hibernation
(b) Noctumality
(c) Echolocation
(d) Aestivation
Answer:
(a) Hibernation

III. State whether True or false. If false, write the correct statement.

Question 2.
Write the human impacts on carbon cycle.
Answer:
More carbon moves into the atmosphere due to burning of fossil fuels and deforestation. By increasing the amount of carbon dioxide, earth becomes warmer. This leads to the greenhouse effect and global warming.

Question 7.
Why are earthworms called as “farmers friend”?
Answer:
Earthworms are referred to as farmers friends as after digesting organic matter, they excrete nutrient rich Waste product called castings. These are useful to the plant and also as the earthworms burrow the soil, there is sufficient aeration which is useful for the roots.

Question 9.
Why is Water Hyacinth responsible for the death of aquatic plants arid animals?
Answer:
Water Hyacinth is called as ‘Cindrella of the plant kingdom’. It covers entire surface of the water resources like ponds and lakes. It will not allow the light to penetrate into the water and increases the Biological Oxygen Demand leading to the death of aquatic plants and animals.3

Question 10.
What is vermicompost?
Answer:
Vermicompost is the manure prepared by using earthworms to speed up the process of decomposition of plant and animal wastes. Vermicomposting is the fundamental practise of organic gardening. Vermicompost helps better plant growth and crop yield, improves physical structure of soil, increases the water holding capacity of soil and is useful in elimination of biowaste.

Question 1.
Explain Nitrogen cycle with a diagram.
Answer:
Nitrogen is primary nutrient important for survival of all living organisms. It is an essential component of proteins, DNA and chlorophyll. Atmosphere is a rich source of nitrogen and contains about 78% nitrogen. Plants and animals cannot utilize atmospheric nitrogen. They can use it only if it is in the form of ammonia, amino acids or nitrates. Processes involved in nitrogen cycle are:

Question 2.
Write in detail the adaptations of bat.
Answer:
Mostly, bats live in caves. Caves provide them protection during the day from most predators and the temperature here is very stable. Apart from caves, bats also live in trees, hollowed logs and rock crevices. They are extremely important to humans as they reduce insect population and help to pollinate plants.
The adaptations of a bat in relation to their habitat are;

Question 4.
Write in detail about IUCN.
Answer:
International Union for Conservation of Nature and Natural Resources (IUCN), is an international organization working in the field of nature conservation and sustainable use of natural resources. It provides public, private and non- governmental organizations with the knowledge to enable human progress, economic development and nature conservation to take place together.

India became state member of IUCN in 1969, through the Ministry of Environment, Forest and Climate change (MOEFCC). Four of 34 globally identified biodiversity hotspots are found in India. They are: